After landing from Fiji and spending a day and a half in Los Angeles, it was time to go home to San Antonio, Texas for a month. I had a few options. I could route myself through a hub like Atlanta or Salt Lake City, or take the direct flight from Los Angeles to San Antonio. Normally, I would have chosen the connections, but since I was traveling with my father, we decided to take the direct flight. That ended up being a mistake.

I parted with $476 for a coach ticket in Delta. I got upgraded to Comfort Plus through my Gold Medallion status, and my dad got upgraded to First Class as a Platinum Medallion. I’ll explain more about how I ended up in first class later.

$476 is steep for a roundtrip flight. Normally, this flight can be had for $300 or less in coach, even though it isn’t very comfortable yet. Since I booked this last minute, $476 it was.

We checked in at Los Angeles International Airport’s Terminal 3 at 1:00 pm for our 7:00 pm flight. Definitely not stunning, but enough for a terminal. Within ten minutes, we had dropped off our bags and meandered the mess of Terminal 3 to security.

I’ve never had a very good time at security, but this is a good place to talk about some etiquette. In places where each person has a bin and a mini “station” for unloading nearly all their stuff, please do not be that person who is in the third stall and shoves all their stuff ahead of the person in the second stall. Because of this, I ended up having to wait for about 20 minutes as my bins (because laptops and shoes and carry-ons all have to be in a separate bin!) were separated by the passenger behind me.

After this experience, we meandered our way to the Terminal 3 shuttle to Terminal 2. Terminal 2 is the location of Delta’s better, larger SkyClub. We got access to the SkyClub through our Platinum Card from American Express. The SkyClub was packed and I couldn’t get any decent pictures. After working for a few hours, we made our way back to Terminal 3.

Delta is working on a new passenger connector bridge between Terminal 2 and 3 which would be a welcome improvement in comparison to the current bus shuttling passengers to and fro.

Terminal 3 is where our mess started. Our flight was initially delayed 30 minutes due to the late inbound. As an airline geek, I checked the status of our inbound to discover we were inevitably going to be delayed. But that was just the start.

At the gate, there was a family looking to board with this:

The family of three had three carry-ons, three personal items, a bag from Legoland and the above dog. I don’t know how they made it through security with all those items, but my biggest question was how they got the stuff on board. I did notice on my flight, after boarding, that no one brought on the large dog. The dog was much bigger than a carry-on and definitely would not fit in an overhead bin without some serious “smushing”. Anybody have any ideas how that would get on-board an aircraft?

It was late and my dad wanted to sleep. Since I was jetlagged on Fiji Time, we decided that I should take his seat because he didn’t intend to eat the meal. So we boarded. Before our departure, a host of maintenance personnel came on board. Soon, our pilot came to us and announced that this plane was deemed out of service due to a loose lever. We deplaned. And then the chaos continued.

The plane was towed away and a new flight began boarding. After deplaning, we were told to remain in the gate area. However, soon after, our cabin crew and ground crew ran off from the gate. By luck, we decided to take a walk around the terminal and saw our flight had been assigned a new gate. At the new gate, we got in line based on Delta’s branded boarding. As is the case with most delays, snacks are usually offered. Not in this case. After standing around, the ground staff came and walked through the first class line to give them water and some snacks. No other passengers were offered snacks or beverages. I messaged Delta about this and got this response: 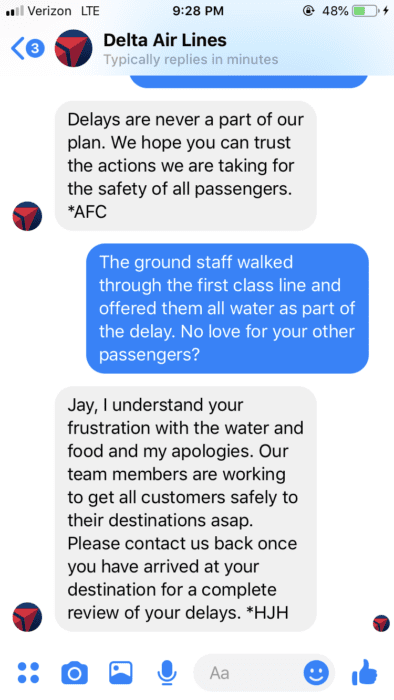 We finally boarded 2.5 hours after our scheduled boarding time at 9:35 pm.

I was greeted by an apathetic flight attendant. Greeted is a strong word. It was more of an acknowledgment that we were coming on board. I can’t blame her because of the delay, but a few of us passengers were joking about whether this plane would be able to take off and she kept on sighing.

Delta flies an E175 on this route, the same type of aircraft that was invovled in a scary bout of turbulence.

I was seated in 4A, the window seat on the left side of the plane in the last row of First Class.

There were a pillow and blanket at my seat, the same kind as on my previous domestic First Class flights with Delta.

The cabin was downright filthy. I assume they wanted to turn around the plane quickly due to the delay and didn’t clean the aircraft, but I found some half-chewed off-brand cheese puffs and dirt all around the seat.

Delta has 12 seats in first class on this aircraft in a 1-2 configuration. Personally, I prefer the single seats on the left side of the plane if I’m traveling alone. In this case, that also ended up being a mistake.

On the left armrest, there was a Universal Power Outlet.

The seat controls were on the aisle armrest, but didn’t actually work. My seat didn’t recline and there was no legrest or footrest on this aircraft. The legroom also felt more constrained than other First Class flights with Delta. I later discovered the cause of this to be the seat in front of me. It was permanently stuck in the recline mode.

We were offered pre-departure beverages on the first plane we boarded. I had a cup of water, but by the time it was served to me, we were told it was time to deplane due to our mechanical issues.

There was no water bottle offered and no headphones. Granted, there was no inflight entertainment offered on this aircraft.

I made one trip to the lavatory which was absolutely filthy. It seemed like there wasn’t any cleaning in between flights. Not the quality I was expecting.

However, one thing about the flight ABSOLUTELY SUCKED. This plane had by far the WORST TRAY TABLE DESIGN EVER!

NOTHING STAYED ON. I didn’t notice the strange angle at first and set my glass of water on the cup insert on the tray table. The glass slid down and spilled all over me.

You couldn’t balance a laptop on there and the meal tray was precarious. There was a little cup holder that could be pulled out from the left armrest, but it was so close to the edge of the tray table that it would get knocked off easily.

This was a horrendous setup and definitely lacked any and all planning. Worst. Tray. Table. Ever.

After the initial pre-departure beverage, there was no service until meal service about 40 minutes after takeoff. We were offered beverages. I went with some water. The flight attendant also took our meal orders. The choices were between a Japanese Cobb Salad or Crab Cakes. Thankfully, most passengers had gone straight to sleep, so I was able to get my first choice of the Japanese Cobb Salad. An hour after takeoff, I was served the meal.

The salad was cold, as was everything else on the tray. For a relatively short flight on a regional carrier, it wasn’t bad. It was average for an airplane meal and was probably sitting around for some extra time due to the delay. It was unmemorable, but the presentation was okay. The chicken, salad, and noodles (underneath the salad and chicken) lacked any flavor, but the dressing definitely helped. This was no Fiji Airways meal, but it was enough for a late night snack.

The lone flight attendant working the First Class cabin was not very warm or personable. She didn’t seem to have any interest in working the flight and didn’t provide overtly attentive service. After my little spill due to the horrendous tray table design, I rang the call button three times before the flight attendant came up and asked if I actually needed anything or was trying to turn the reading light on. Strange, since my reading light was already on, but. She did, however, provide a generous amount of napkins.

I contacted Delta who gave me 2,000 Skymiles as part of the delay. For this leg alone, I got 1,672 miles. So more than doubling my miles was pretty good. Skymiles do have some sweet redemptions.

The only real way to describe this flying experience was as a circus. It really was a whole host of blunders that would be a little funny if you weren’t actually flying on this route. From a poorly handled delay, disgusting aircraft, worst tray table design ever, and service that I wouldn’t even expect in coach. Ai yai yai.

I generally find the service on a Delta Connection flight to be hit or miss. It’s either incredibly horrendous or quite wonderful. This was a definite miss. If you have the choice between a mainline “regional” (read: A220) or true regional flight, I would definitely choose the mainline flight.

How would you have reacted to this flight? Let us know in the comments below!