Everything You Need To Know About HiFly

HiFly is a very small chartered airline based out of Portugal. They have a fleet size of eight planes and have been operating for the last two decades. Why are they news? Because they’re the first Airline carrier to order a second hand Airbus A380.

The first key difference about HiFly compared to other featured airlines is that they are a charter Airline. They do not operate any ongoing routes. HiFly do not service at any particular destinations or cities. They do not sell tickets to take passengers.

Instead, this airline rents out its planes (With crews, a practice known as “wet-leasing”) to various different medium to long-term contracts for airlines, tour operators, governments, companies and individuals. You can find their aircraft all over the world, from America to the Middle East, from Asia to Australia. Their fleets can even be painted in appropriate colours for the chartered job. This includes when are rented out to other airlines as substitution craft.

Where Does Hifly Chartered Airline Get Their Fleet?

Hifly generally requires the aircraft second-hand from other airlines, with Singapore airways not renewing a lease on two Airbus A380s, it seems Hifly is leaping at the opportunity to expand its fleet.

This is a relief for Airbus, as the A380 (as a price of $445 million) has been particularly hard to resell. These two particular planes were actually destined for the scrapyard originally. As it would cost approximately $40 million to retrofit the planes inside it is likely that HiFly will keep the configuration the same (everything from its three class system and ability to sit 544 passengers).

The availability of a rentable A380 on the market will now mean other airlines will be able to trial this craft to see if it works for them, before ordering a new one from Airbus.

You can read more about this new Airbus A380 here. 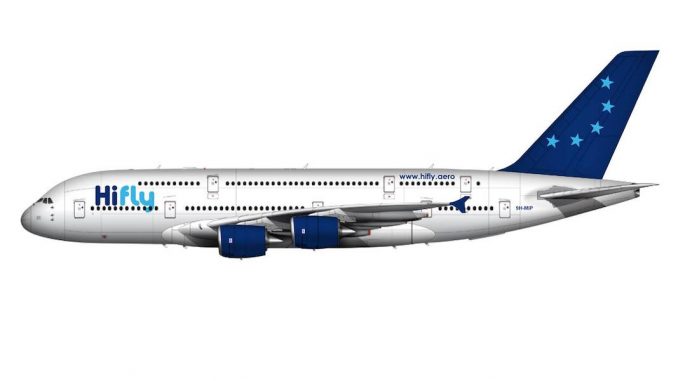 As the fleet sizes rather small (eight planes), you can be quite a rare treat to actually fly with HiFly. But for the unexpected traveller, there can be some interesting differences when travelling on a ‘wet-lease’ plane.

You first the plane will actually have the same interior from its original owner. For example, you might be flying in an old Singaporean airways plane that still has all of the first class accommodations and seating.

However, this does not include the service that would be usual in first-class. HiFly does not provide entertainment, so all TV monitors would be unavailable all throughout the journey.

On the culinary side, everyone on board receives the same meal, with no other options or distinctions between the different classes. As the crew are not airline employees, they are generally much more relaxed and casual about their service.

HiFly has a unique role to play in the Airline industry. We look forward to seeing how they expand over the next few years.