Air France Accepts First Airbus A220 Ahead Of October Flights

Air France has taken delivery of its first Airbus A220 aircraft. The airline became the second French carrier to take the jet, behind Reunion-based Air Austral. The airline will begin flying the first of its 60 aircraft order with the start of the IATA winter schedule on October 31st.

More carriers around the world are slowly adopting the Airbus A220. Its efficiency makes it a popular replacement to some older generation aircraft, and now Air France has taken note of its latest order. With its order of 60 Airbus A220s, Air France is currently on track to become the largest A220 operator in Europe.

Today, Air France took delivery of its first Airbus A220-300 aircraft. The jet, registered as F-HZUA, flew from Canada to Paris last night. The airline then officially took delivery of the aircraft at its Paris, Charles de Gaulle Airport home.

The delivery comes as the first of many. By 2025, Air France hopes to have 60 of the smallest Airbus product in operation. The fleet is expected to primarily replace the aging A318s and A319s operated by the carrier, but they will also replace some A320 aircraft.

What to expect from the A220

As is standard on the Airbus A220, Air France has equipped its cabins with a 2-3 seating layout. Interestingly, the columns of seats are A, C, D, E, and F, skipping B on the left-hand side of the aircraft. 80% of the 148 seats onboard the aircraft have a window or aisle. At the front of the cabin is a small business cabin, followed by an economy cabin.

According to Air France, its seats have a width of 48cm (18.9 inches). These recline to 118 degrees. The seats come with ergonomic leather seat cushions, a table, a cup holder, and a pouch for documents. Each seat also has USB A and C ports, which means passengers can power their devices while using the in-flight WiFi.

According to aviation data experts Cirium, Air France is yet to place the Airbus A220 on any specific flights in its schedule. However, the airline did give us a clue as to where we’ll see the aircraft flying. The aircraft will begin flying for the French flag carrier in a month on October 31st. This is the day that the IATA winter schedule begins, and thus, it is a natural day for the aircraft to enter service.

The aircraft will initially be used for short-haul intra-European jaunts. Initial destinations have been listed as,

By the end of the winter season, Bologna (Italy), Rome (Italy), Lisbon (Portugal), and Copenhagen (Denmark) should’ve also been added to the A220 network.

“This new aircraft with an unparalleled energy performance represents a major asset for Air France. To date, fleet renewal is the main source of reducing CO2 emissions, and this is why we are continuing to invest in latest-generation aircraft.”

What do you make of Air France’s first Airbus A220 delivery? Let us know what you think and why in the comments! 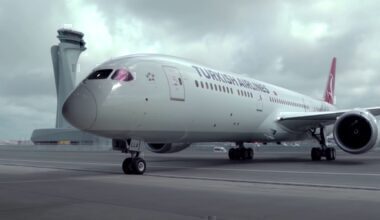