The Airbus A220 has proved popular with many airlines. As of September 2020, there have been 639 orders from at least 18 airlines. The largest order in Europe is from the Air France-KLM group, with Air France taking 60 A220-300 aircraft to replace its A318 and A319 aircraft.

Placing an order for 60 aircraft

The order was anticipated for some time and finally announced in July 2019 (with a memorandum of understanding signed at this time). It was formally confirmed in December 2019. The Air France-KLM group ordered 60 of the larger variant A220-300 aircraft, all destined for Air France. As part of the original memorandum of understanding, it also placed options for up to 60 more aircraft. This is believed to still be in place but not as yet taken up.

At the time of confirming the order, Group CEO, Benjamin Smith, said in a press release,

“We are very pleased to work with Airbus to add the A220-300 to our fleet, an aircraft that demonstrates optimum environmental, operational, and economic efficiency.  The selection of the Airbus A220-300 supports our goal of a more sustainable operation, by significantly reducing CO2 and noise emissions. This is a very important next step in Air France’s transformation, and this evolution in Air France’s fleet underlines the Group’s determination to attain European airline leadership.”

Where will the A220s operate

The A220 makes a lot of sense for Air France. It already operates an all-Airbus narrowbody fleet, made up of the following (as of Ocotber 2020, according to Planespotters.net)

We will likely see it operating the same routes of short-haul European flights and domestic flights in France. In May 2019, however, Air France announced it would cut short-haul flights by around 15%, citing tough competition from low-cost airlines as well as high-speed rail options. With this in mind, it may operate more medium and even long-haul routes. And with a range of just over 6,200 kilometers, it is certainly capable.

We will have to wait and see how the aircraft looks once it is equipped, but the A220 has received positive responses from passengers so far. It has been praised for its wider seats, large windows, and a quieter cabin. In particular, it offers a 2-3 cabin layout (and there is not enough space to increase this), a welcome change from the 3-3 standard. Air France has also stated that the aircraft will be equipped with WiFi.

Well in advance of its launch with Air France, the airline released the following video of how it will look:

A major motivation for the A220 is to cut emissions. Air France previously said that the aircraft will generate 20% less CO2 than others, allowing it to reduce cost per seat mile by more than 10%.

This became even more significant in 2020. As part of the conditions of government support offered to Air France, it must further cut its carbon emissions. According to Reuters, the airline will have to cut its emissions by per kilometer in half by 2030 (based on 2005 levels). And for domestic routes, this has to happen by 2024.

The larger variant A220-300 aircraft entered service with airBaltic in December 2016. At this time, of course, it was still the Bombardier CSeries CS300. Airbus’s deal to acquire a majority stake (and rename the aircraft to the Airbus A220) did not conclude until July 2018.

Since then, 83 aircraft have been delivered. Air France-KLM will receive its first aircraft in Autumn 2021. As of April 2020, this remained on track, according to comments from the group CEO Benjamin Smith.

Air France would be interested in a larger A220

Air France has also indicated it would be interested in a larger A220 variant if it were developed. Notes about a potential A220-500 stretch appeared in an investor’s presentation in late 2019. And an airline representative confirmed the interest, telling Simple Flying:

“Airbus has the technical possibility, in the future, to stretch the A220-300 with a larger capacity aircraft. If this were the case, we would examine this option for the future development of the Medium-haul fleet (post-2025).”

There has been speculation about this further stretched variant (which would compete with the Boeing 737 and Airbus’ own A320), but nothing has yet been confirmed.

Other large A220 orders

Air France is not alone in making a significant commitment to the A220. As of late 2020, Delta Air Lines is the largest operator of the A220, and it looks set to stay that way. It has taken delivery of 31 aircraft and has a total of 95 ordered. It is the only one of the big three US airlines to order the A220. JetBlue has also ordered 70 (with delivery expected from December 2020) to replace its Embraer 190 aircraft.

Do you think the A220 will be a success for Air France? And would you like to see a larger variant developed? 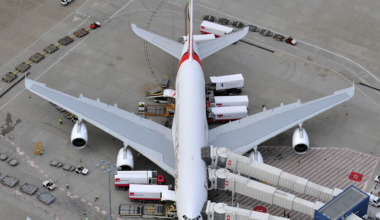