On 18 January an airBaltic de Havilland Dash 8-400 had to perform an emergency descent due to cabin pressure issues. Flying at FL250, the turboprop had to descend to FL100 before returning to its origin airport of Riga.

The Dash-8, registration YL-BAF, was performing flight BT305 from Riga (Latvia) to Helsinki (Finland). According to The Aviation Herald, the aircraft was 80nm north of Riga when the incident occurred. Upon diverting back to Riga, the aircraft made a safe landing about 55 minutes after departure. According to Airfleets, the aircraft is 10 years old and his been with airBaltic since coming out of the factory.

Insufficient pressure indication was reported as the reason for the return. A replacement Dash-8 was sourced: registration YL-BAH, which resumed the journey to Helsinki. In total, the flight suffered a delay of two hours and 40 minutes.

On 20 February, the occurrence aircraft, YL-BAF, performed a test flight after it was checked over. Assigned the flight number BT9891, the plane flew for about an hour in a large circle west of Riga. With tests successful, the aircraft was returned to service about 50.5 hours after the incident.

“airBaltic confirms that on February 18 its flight BT305 from Riga to Helsinki performed by a Bombardier Q400 NextGen returned to Riga, Latvia due to technical reasons. Safety is the top priority of airBaltic. During the flight, the crew reported an insufficient pressure indication, and, in accordance to all standard procedures, Captain made the decision to return to Riga in a safe altitude. airBaltic apologizes to all passengers for the inconveniences caused.”

airBaltic’s fleet of 38 aircraft includes 12 Dash-8 turboprop aircraft. According to airBaltic, the single-class, 76-seat aircraft can fly up to 2,000 kilometers. The airline not only uses the aircraft on shorter regional routes, such as flights to Scandinavia but also on longer flights to major European destinations as well.

The aircraft is known for its relatively low noise levels as the “Q” in the plane’s Q400 designation stands for Quiet. The airline says that one of the aircraft’s greatest benefits is its “contribution to helping preserve the environment”, saying that the Q400 uses 30% less fuel compared to older jets of the same size. It also produces fewer emissions than similar aircraft.

These Dash-8s were manufactured by Bombardier with the variant type being Q400. Canadian manufacturer Bombardier has since sold off its Q400 program to Longview Aviation Capital. In fact, Bombardier has divested itself of most of its aerospace projects- selling its remaining share in the A220 to Airbus and its CRJ program to Mitsubishi. It appears that it wants to exit aerospace entirely as rumors have been circulating of a deal to sell its business jet division to Textron.

Have you ever flown airBaltic or the Dash-8? Let us know about your flight experiences by leaving a comment. 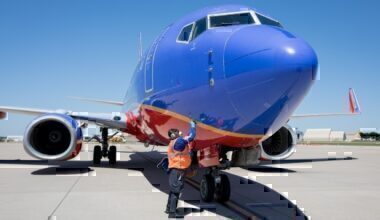 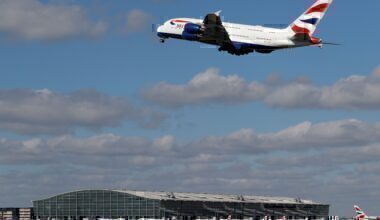