Airbus Vs Boeing: How The Major Manufacturers Compared In 2020

While 2020 was a difficult year for the aviation industry globally, Airbus and Boeing both showed extremely varying results. While the European giant managed to beat its year’s targets and avoid large-scale cancellations, it’s American competitor had no such luck and saw its worst performance since 1977. Here’s how Airbus and Boeing fared in 2020.

Starting with Airbus, the airline manufacturer had an impressive 2020 considering the disastrous circumstances for the industry. Airbus delivered 566 aircraft last year, beating out its informal target of 560 aircraft. While deliveries fell 34% compared to the 2014-2019 period, it is still a respectable figure considering aviation was grounded for months in many countries.

Airlines were clear which Airbus aircraft they preferred during the pandemic: narrowbodies. Since most international travel (barring cargo) had negligible demand after March, expensive widebodies like the A350 weren’t what airlines were looking for. Instead, the A320 family and new A220 dominated the delivery book for Airbus.

Of the 566 planes deliveries, 484 were narrowbodies (A320s and A220s) while only 84 were widebodies (A330s, A350s, and A380s). Efficient and high capacity narrowbodies quickly became the favorites for domestic routes worldwide, increasing their demand among airlines.

But which airlines were taking large deliveries during this difficult time? The answer is quite a few actually. The leader in terms of 2020 deliveries was India’s low-cost giant IndiGo, which took on 44 new aircraft, consisting of 24 A320neos and 20 A321neos. The airline opted to retire all of its less-efficient A320ceos and modernize its fleet in 2020.

Aside from these carriers, others also continued to take on new planes despite 2020’s events. Explaining his company’s success in aviation’s worst year, Guillaume Faury, Airbus Chief Executive Officer, said,

“Working hand-in-hand with our customers allowed us to navigate a difficult year. The Airbus teams, customers and suppliers truly pulled together in the face of adversity to deliver this result. We also thank our partners and governments for their strong support to the sector. Based on our 2020 deliveries we are cautiously optimistic as we look into 2021, although challenges and uncertainties remain high in the short term.”

While things were looking cautiously optimistic in Toulouse, the situation in Chicago looked dire. Boeing delivered only a dismal 157 aircraft over the entire year, making it the company’s worst year on record since 1977. After a peak of 806 aircraft, the next two years have been extremely difficult for the manufacturer.

The airline’s delivery focus was squarely on cargo aircraft in 2020, jumping on freighters’ skyrocketing demand. The airline delivered 43 737s (including the MAX), five 747-8Fs, 30 767Fs, 26 777s (five passenger and 20 freighters), and 53 787 Dreamliners. Overall, cargo aircraft proved to be a saving grace for Boeing. 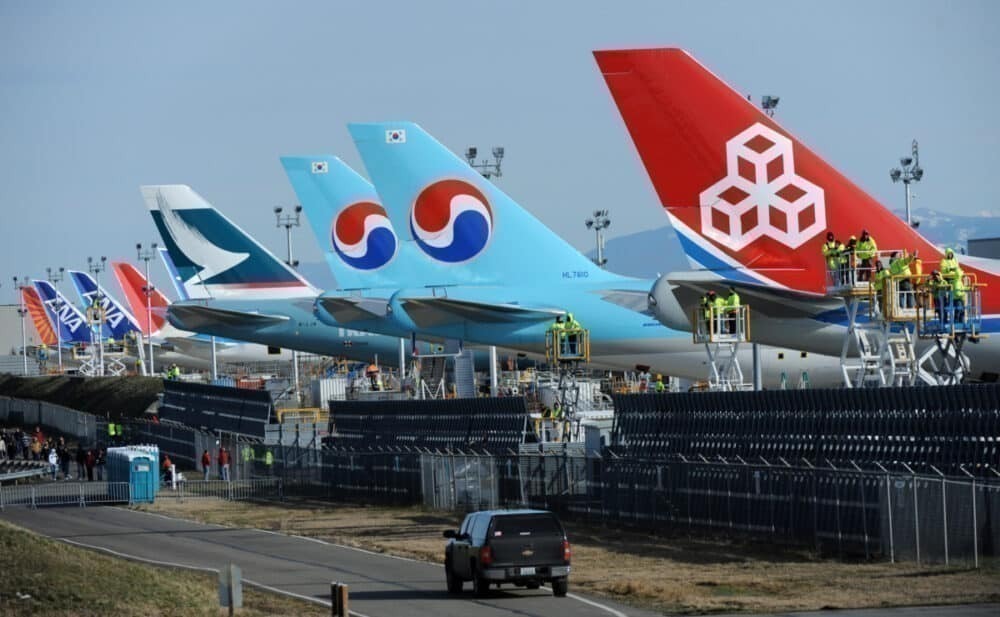 Demand for cargo aircraft was a bright spot in Boeing’s delivery book for 2020. Photo: Getty Images

Boeing’s struggling delivery book was due to the global grounding of the 737 MAX for all but the last month of 2020. As airlines considered taking on new narrowbodies, Boeing simply had no aircraft to offer, resulting in far fewer deliveries.

To make matters worse, the predictions of a long-term downturn pushed airlines and lessors to cancel orders, especially for the beleaguered 737 MAX en-masse. Boeing saw over 640 aircraft orders canceled in 2020, shrinking its order backlog by a massive 22%.

Overall, the year was extremely difficult for Boeing barring the month of December. The recertification of the MAX by the FAA and other regulators in the last days of November kickstarted deliveries for the manufacturer once again and set up a much strong 2021.

Four airlines have resumed deliveries of the 737 MAX, and three have resumed commercial service. We can expect dozens of more MAX deliveries to major customers like American, Southwest, United, and Ryanair in the coming months.

For Boeing, 2021 marks a year of significant recovery as the 737 MAX slowly receives its recertification around the world. With a backlog of around 450 produced planes and thousands more on order, we can expect to see Boeing’s delivery book to grow drastically this year.

However, with demand still low and airlines financially struggling, it might be a while before deliveries ramp up anywhere near 2018 levels. For now, Boeing can expect to begin clearing its parked up aircraft and slowly increase production levels.

For Airbus, 2021 will test if the manufacturer can retain its progress from the previous year and convince airlines to continue taking more planes. While rising demand will see more planes flying, many airlines might opt to pull their existing planes out of long-term storage rather than paying up for multi-million jets.

Once again, demand for the A220 and A320 family does remain extremely high among carriers globally. However, the growing trade war and tariffs on new planes could hurt the manufacturer further.

The rollout of vaccines globally will help increase air travel demand once again, having a ripple effect on deliveries. However, with vaccines still extremely scarce globally, it could be a while before demand for travel returns to anywhere near its previous highs. If 2020 was the marathon year of struggles, 2021 will be an endurance challenge for both of the world’s largest planemakers.

What do you think about Airbus and Boeing’s prospects in 2021? Will they see growing orders and deliveries? Let us know your thoughts in the comments!