“We have re-commenced installing satellite [WiFi] on an aircraft. We have also got approved and are going to be undertaking a refurbishment of our core 737 fleet, such as the -800s and -900ERs, and we’re also going to be refurbishing the remaining Q400s that need new carpets and seat covers. You’re going to see a whole new refreshed look at our fleet over the next couple of years.”

The Boeing 737-800s and -900s make up the majority of Alaska’s fleet and have yet to receive the full retrofits that the Airbus and Boeing 737-700s have received.

The retrofits came two years after the airline merged with Virgin America. In the aftermath of the merger, the Airbus fleet of Virgin America and Boeing fleet of Alaska featured different products.

The retrofits focused on making the cabins look more modern and be standardized across the Alaska Airlines fleet. Some improvements to the aircraft include new ambient lighting, a refreshed color palette, tablet holders at seats, expanded premium cabins, and power outlets at all seats.

The Airbus A321neos have room for 190 passengers. This includes 16 in first class, 24 in extra-legroom economy, and 150 in standard economy. All of the first class seats are recliner-style, as Alaska is not thinking about putting lie-flat seats on its aircraft.

The remaining planes in Alaska’s mainline fleet that need to undergo retrofits are the Boeing 737-800s and Boeing 737-900s. Alaska’s Boeing 737 MAX jets have been delivered with the new interior.

Alaska has yet to outline its full retrofit program for the three types of aircraft. New seat maps and configurations for the jet types have not been revealed.

Post-merger fleets are usually inefficient and require plenty of retrofits. In 2020, when the crisis hit, Alaska did not want to shell out the cash to retrofit all of those aircraft. Now that things are starting to improve, the carrier can start to look at retrofitting these jets and getting to a harmonized configuration.

The new aircraft may get denser in their configuration. Other changes to the aircraft will certainly be the addition of satellite WiFi and the introduction of new ambient lighting to make the interior feel modern and refreshed.

Are you looking forward to the Boeing 737-800s and -900s getting retrofits? Let us know in the comments! 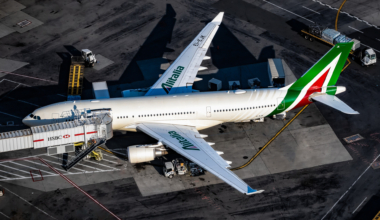