American Airlines has a unique opportunity with their soon to fly Airbus A321XLRs: the ability to install premium economy in their single-aisle long-haul aircraft.This is according to INC magazine.

At the 2019 Paris Air Show, American Airlines made a stunning order for 50 A321XLRs. This aircraft will be the world’s longest range single aisle aircraft, with an ability to fly 4,700nmi (8,700 km), or roughly the distance from Alaska to Miami.

Because of the unique routes that this aircraft might be flying on (long-haul but low capacity routes), American Airlines might choose to add in more premium category of seats to take advantage of the long flight times. One of these is premium economy!

“If and when we fly it to close-in Europe,” said American Airlines President Robert Isom per a report in View From The Wing “that would require lie flat seats, all aisle access for business class…allow for premium economy.”

American Airlines premium economy has a range of additional benefits over the standard economy seats found on the carrier.

For one, the class comes with more leg room (pushing 36 inches compared to 31 in the main cabin) and free entertainment. All of the seats onboard will also feature in-seat power and wifi. Passengers in premium economy will also be given a substantial amenity kit and a specially designed sleeping kit with a pillow.

Passengers will also find that they get priority boarding and their luggage is fast tracked to arrive the baggage carousel first.

Passengers are also treated to better meal options and complimentary spirits and wine. Whilst many of these are taken for granted on long-haul international routes, this offering will be a game changer on the long-haul domestic routes (such as Florida to Hawaii, Alaska to Dallas etc). However, American Airlines has confirmed they want these aircraft to fly primary between East Coast US cities and medium-sized European cities.

American Airlines plans to have these aircraft flying by 2023.

Will the A321XLR work well with premium economy?

As the A321XLR will carry around 180-220 passengers, the inclusion of the premium economy and the business class will push this number down to the former figure of 180 seats.

But American Airlines will ultimately earn significantly more from these seats than economy, despite only a slight increase in legroom and additional extras. Some airline commentators have been skeptical of this move, as in the past American Airlines has put cabin efficiency over passenger comfort resulting in plenty of complaints.

This premium economy, however, will give passengers an alternative seating option without having to upgrade completely to business and the lie-flat seats (which on this aircraft will have direct aisle access). We look forward to reviewing the American Airlines A321XLR sometime in the near future. 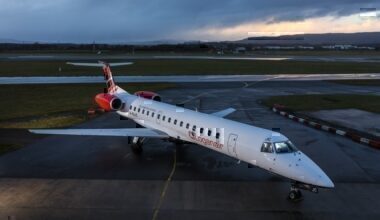