A pilot scheduled to operate different aircraft types can present particular challenges, including variations in procedures, flight characteristics, and cockpit layout. To help with this, Airbus offers “Mixed Fleet Flying” (MFF), which enables pilots to be certified to regularly operate more than one type of Airbus fly-by-wire aircraft. ANA is the latest to adopt this policy as it uses both the A380 and A320 family of aircraft.

Japanese civil aviation regulator, the Japan Civil Aviation Bureau (JCAB), has now approved Mixed Fleet Flying (MFF) for ANA and its operation of the A380 and A320 Family. The first operator in the world to introduce MFF between the two types, ANA will benefit by having crews easily move between flying the A380 ad A320.

A feature unique to Airbus, MFF is made possible with a high degree of commonality between flight deck and aircraft control systems of various jets, enabling pilots to be certified to operate more than one type of Airbus fly-by-wire product on a regular and concurrent basis “At ANA this will enable crews to fly a mixed pattern of short and long-haul services,” Airbus notes in a public statement. The planemaker goes on to say:

“We are pleased that A320 and A380 MFF operations were approved by JCAB and that ANA has become  the world’s first airline to introduce it ,” -Stéphane Ginoux, Head of North Asia region for Airbus and President of Airbus Japan

Ginoux adds that MFF offers airlines increased flexibility and cost-efficiency and is just one factor contributing to the success of Airbus. “For airlines, the increase in revenue hours flown by pilots due to less standby and downtime results in a significant improvement in productivity.”

Other benefits of MFF

Airbus adds that with MFF, commonality extends from the flight deck into the passenger cabin as well. This includes similar systems, control panels, and procedures within various aircraft families.

It’s not just crews operating aircraft that benefit from MFF. Indeed, the level of technical commonality also streamlines maintenance procedures. This provides airlines with a significant reduction in costs.

MFF is not embraced by all

As The International Federation of Air Line Pilots’ Associations (IFALPA) notes, maintaining a high level of pilot competency when flying between different types of aircraft can be very challenging, putting “an undesirable strain on the margin of safety.”

In a 2015 publication, IFALPA stated that it “does not support the use of pilots for flight operations which require Cross Crew Qualification (CCQ), Crew Qualification for Operation of one or more Type or Variant (CQOTV), or Mixed Fleet Flying (MFF).”

The union group insisted that variations in cockpit layout, flight characteristics, and more, placed too much strain on pilot competency, thereby risking safety. The publication adds:

“IFALPA recognizes that some operators utilize CCQ/CQOTV/MFF to staff their cockpits. In such cases, specific considerations and restrictions should be applied with regard to training, operation and recency.”

More recently, in January 2020, Norsk Flygerforbund (NF), or the Cockpit Association of Norway, wrote to Norway’s civil aviation regulator, highlighting some concerns regarding Mixed Fleet Flying (MFF) for Scandinavian Airlines (SAS) and its inclusion of the A350.

The group noted that, while the A320/A330/A340 were “designed in the same century,” the A350 is a quite different aircraft, adding, “when different versions of older widebodies, and different versions of A320’s, are mixed in daily operation, it could in our view complicate matters to a point were flight safety will be threatened.”

The letter provides an example, noting that the A320 and A330 are pretty similar only when it comes to cockpit layout but have considerable differences regarding “type of operation, weight, performance, and behavior, wingspan, etc.”

Despite concerns voiced by certain pilot groups, it’s interesting to note that, even as far back as 2018, there were 36 airlines that had adopted MFF with their fleets. Indeed, some have been doing so for over two decades.

Despite this wide acceptance, ANA’s adoption of MFF is very much unprecedented, as it allows for crew interchangeability between Airbus’ largest aircraft and some of its smallest. Ultimately, in this situation, we have to trust that the JCAB’s endorsement for ANA MFF was well researched and analyzed before approval.

What are your thoughts on crews operating widely varying aircraft? Can a pilot safely and competently go from flying an A380 one day and move to the A320 on the next shift? Let us know what you think by leaving a comment. 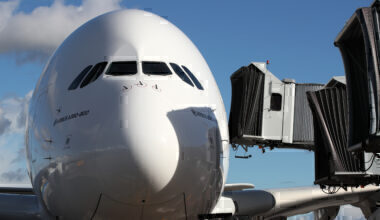