Azul Airlines is supporting Disney World in Florida with its latest special aircraft livery. The Mickey Mouse-inspired livery was spotted on the side of the airline’s latest A320neo as it began flight testing out of Toulouse yesterday. The jet is set to join the airline’s fleet later this year.

Special liveries celebrating brand partnerships are nothing new. Earlier this year, Simple Flying reported that Skymark Airlines had launched a Pikachu Boeing 737 jet. However, Disney is also popular when it comes to partner liveries, with everything from Frozen, to Toy Story and Star Wars featuring on the side of commercial jets.

Azul has been building its Airbus A320neo fleet for several years now. According to data from ch-aviation.com, the airline has taken delivery of 42 aircraft, with a further 14 on order. As such, the A320neo fleet has an average age of 3.5 years.

The latest aircraft will turn heads and excite spotters when it is delivered to the airline later this year. With the test registration F-WWDY, the aircraft with MSN 10582 has left the typical blue of the Azul livery for red, yellow, and black.

With a smile on the nose, most of the aircraft’s fuselage is painted in the typical mickey mouse colors, including the yellow dots of his trouser buttons. The fuselage also reads “Walt Disney World” while Mickey stands tall on the tail. The winglets also have a little Mickey Mouse painted on the inside, meaning everybody’s favorite cartoon rodent is bound for in-flight Instagram greatness.

The aircraft with the mouse will be registered as PR-YSH once delivered to Azul. In the meantime, it has undergone its first flight on its test registration. Yesterday the aircraft departed from Toulouse at 14:07, according to RadarBox.com. The jet ultimately climbed to 39,000 feet flying out over the Bay of Biscay with few turns. The aircraft landed back in the home of Airbus two hours and 52 minutes later at 16:59 following a touch and go.

Not the first Disney aircraft, and probably not the last

The Mickey Mouse A320neo isn’t the first aircraft to advertise a Disney park on the side and likely won’t be the last. When aircraft receive a Disney livery, it is because of a sponsorship deal with the airline.

Typically, the aircraft will be based out of an airport close to the park. When it flies to other airports, it shows those who may see it that it is easier to fly to Disneyland than they may think. Over recent years, Star Wars has been a big theme of such jets, though the Mickey Mouse plane signals that other Disney brands are still relevant. While not exhaustive, here are a list of other popular Disney jets.

When aircraft are being certified, they have to undergo cold weather tests. One Boeing 737, in particular, can fly despite Elsa’s icy powers. B-1317 is a 4.10-year-old Boeing 737-800. According to data from ch-aviation.com, the aircraft was delivered to China Eastern in August 2017.

In November 2019, the aircraft received an icy paint job featuring the cast of Frozen, in addition to the Disneyland Shanghai castle. The jet advertises Shanghai Disney Resort and unsurprisingly often flies to and from Shanghai. The Disney theming continues inside the aircraft for anybody who may miss the livery boarding through a jet bridge. Overhead bins feature Frozen and Disneyland graphics, while headrests feature Elsa and the Disneyland castle.

Sticking on the Boeing 737 theme, we come across Alaska Airlines’ Boeing 737-800 registered as N537AS. The 9.62-year-old aircraft advertises Pixar Pier, a themed area in the Disneyland California Adventure theme park near Los Angeles. It received its latest paint scheme in October 2019. Alongside a depiction of Pixar Pier, Buzz Lightyear can be seen flying on the aircraft’s tail, holding Woody, while Jessie rides on this back. The aircraft’s nose also features the Pixar ball design.

While Azul Airlines has gone for a very 2D cartoonish depiction of Mickey Mouse, WestJet shows the character in his animated 3D form on the side of its 11.65-year-old Boeing 737-800. Like the Azul aircraft, the plane advertises Walt Disney World. The tail depicts Mickey Mouse from The Sorcerer’s Apprentice in Fantasia, shooting fireworks at the Disney World castle shown at the front of the jet.

In September 2019, a Virgin Atlantic Boeing 747 took on a special livery to celebrate the opening of the Star Wars Galaxy’s Edge attraction area at Walt Disney World. Rather than taking on a full Disney livery, the aircraft kept its primary Virgin livery but also had a large decal of the Millenium Falcon placed on the side. Unfortunately, the livery was pretty short-lived, as Virgin stopped operating the Boeing 747 in the wake of the COVID-19 pandemic in early 2020. The plane was ferried to Ciudad Real Airport to be decommissioned in December 2020.

The aircraft’s left side is painted blue to represent the rebel forces, while the right side is red to represent the dark side. The color scheme continues inside with red and blue headrests showing the logo of the respective sides.

While the list of Disney-themed jets could go on and on, we thought we’d wrap it up with ANA’s trio of Star Wars jets. The airline has repainted three of its widebodies to celebrate popular ‘droids’ in the series. JA873A is a Boeing 787-9 wearing an R2-D2 livery. JA789A is a Boeing 777 despite its misleading registration and wears a BB-8 livery. Finally, JA743A is a Boeing 777-200 ER wearing a golden C-3PO livery.

Which of the Disney liveries is your favorite? Let us know what you think and why in the comments! 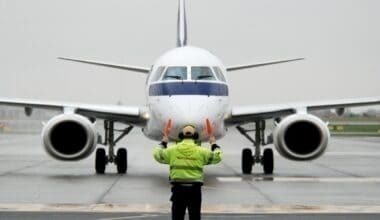 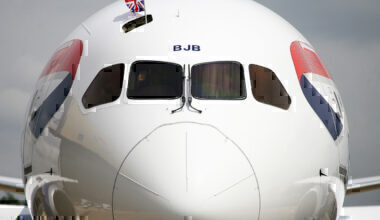 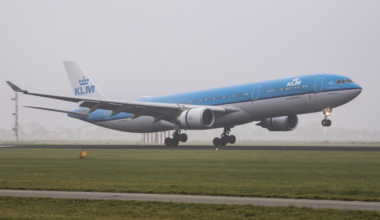 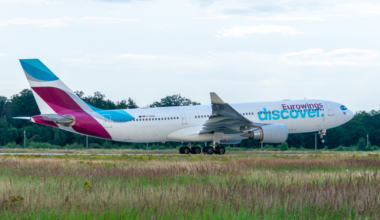