Review: British Airways’ A320 Service To London During COVID-19

After British Airways ditched buy-on-board in favor of the Speedbird Cafe as a COVID safety measure, it was set to bring back this service at the start of this week. Not only that, but it was set to revert to a more sensible boarding process, as well as reopening its lounges. Daniel Ross checked out what these changes look like in real life.

As of Monday 19 July, in tandem with the easing of almost all coronavirus restrictions in England, the so-called ‘Freedom Day,’ British Airways also reintroduced some of its on-the-ground and in-the-air service offerings. Namely, the reopening of some domestic lounges, the return of priority boarding, and the option to order and buy food on-demand in flight.

In terms of passenger experience on the ground, three of the airline’s domestic lounges in Scotland have been reopened. This includes Aberdeen (ABZ), Edinburgh (EDI) and Glasgow (GLA). The news, which many a Scottish frequent flyer will welcome, was announced officially by the airline on Sunday. As it stands, the airline’s other domestic lounges in Manchester (MAN) and Newcastle (NCL) remain closed until further notice.

Additionally, passengers flying in First or Club and those with eligible Elite Status would see the return of priority boarding. The airline’s decision to do so is in line with the UK government’s decision to remove restrictions on social distancing.

Early on in the pandemic, BA opted to scrap its policy of boarding passengers in priority groups in favor of inviting passengers to board sequentially, starting with those seated in rows at the rear of the aircraft and continuing towards the front, where the aircraft’s premium cabins situated.

The move was introduced to reduce the number of passengers queueing in aircraft aisles when stowing luggage in the overhead lockers. This meant that in most cases, passengers flying in premium cabins and those with Elite status would board last.

British Airways has also introduced changes to the passenger experience in the air. Passengers on select flights now have the option to order from the in-flight food and beverage menu via connecting to BA’s .air intranet site using handheld devices.

Since completely stopping all in-flight service at the start of the pandemic, BA has slowly reintroduced certain aspects of service. Before Monday’s update, passengers had the option of either pre-ordering food and drink online before flying or settling for the airline’s complimentary water and snack bag instead. There would be some short-haul routes like Jersey (JER), Manchester (MAN), etc. that would not get the new option due to the short duration of the flights.

However, my experience flying the 10:40 flight from Glasgow (GLA) to Heathrow (LHR) on Monday morning was not entirely what I expected it to be.

On a positive note, the lounge was indeed open as advertised and it was really nice to indulge in a BA domestic lounge experience once again. Though it has returned with an offering that is distinctly average compared to the experience currently at Heathrow, it’s certainly better than nothing.

Access to British Airways’ business class lounges, like the one I visited in Glasgow, is restricted to certain passengers only. You are eligible for access with either a First, Club Europe or Club World ticket or with a minimum elite status of British Airways Executive Silver or oneworld Sapphire.

Even though I’d used BA’s lounge at Glasgow before, I found it rather difficult to locate. After clearing security, I saw signs for the Upper Deck and Lomond lounges but not for BA’s. It wasn’t until I got to the central seating area of Terminal M that I noticed the first sign pointing out the lounge.

Other than that one sign, the rest was down to exploring and taking the odd wrong turn. Extra signage might help here, especially given there may be some passengers who don’t realize that BA’s lounge has reopened or even that there is one at all. 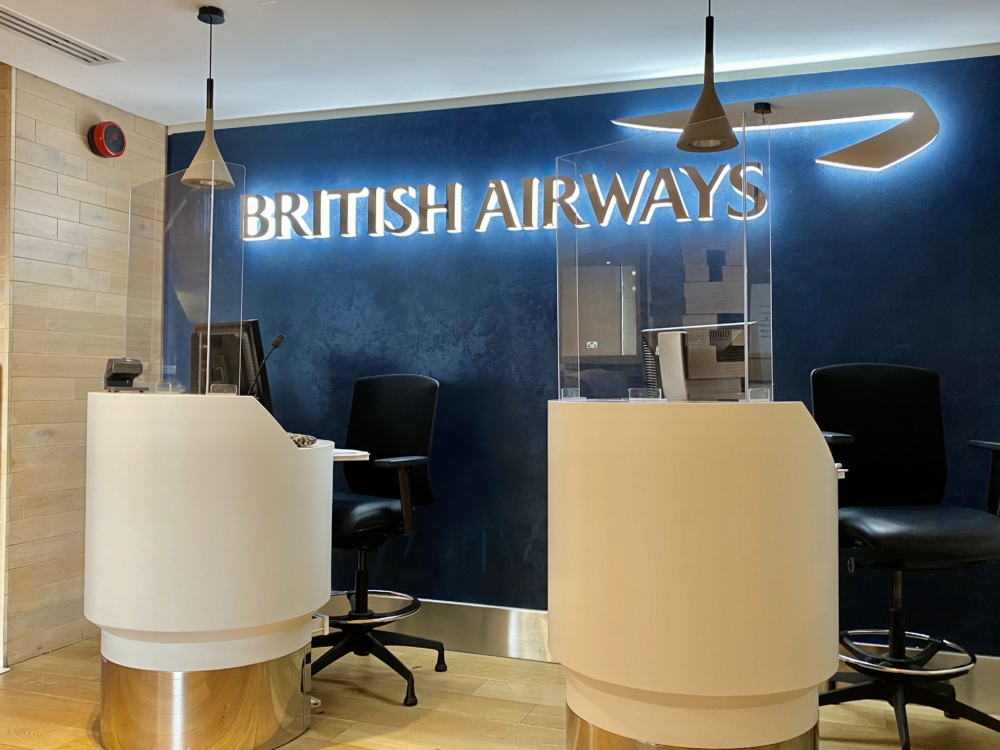 Once inside, the lounge was spotless, as you’d expect after such a long time shuttered. It was clear that the incredibly friendly and helpful staff were happy to be back at work. One staff member in particular, Yvonne, was exemplary. Usually based at the temporarily shuttered Gatwick lounge, she has been drafted in to oversee the reopening of Glasgow’s lounge. 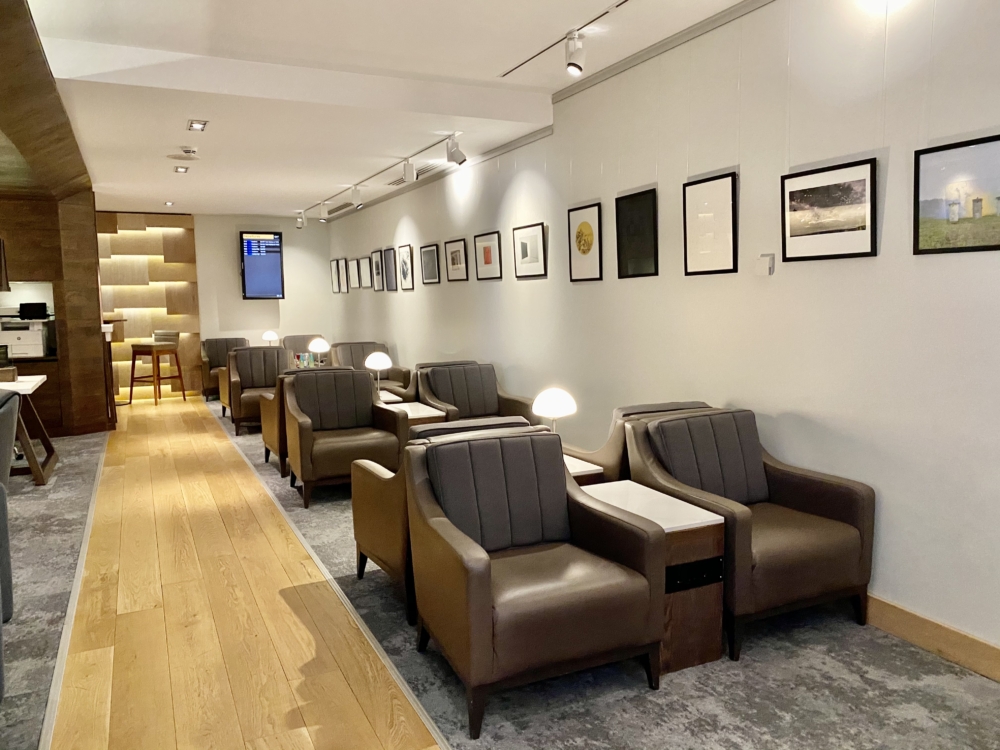 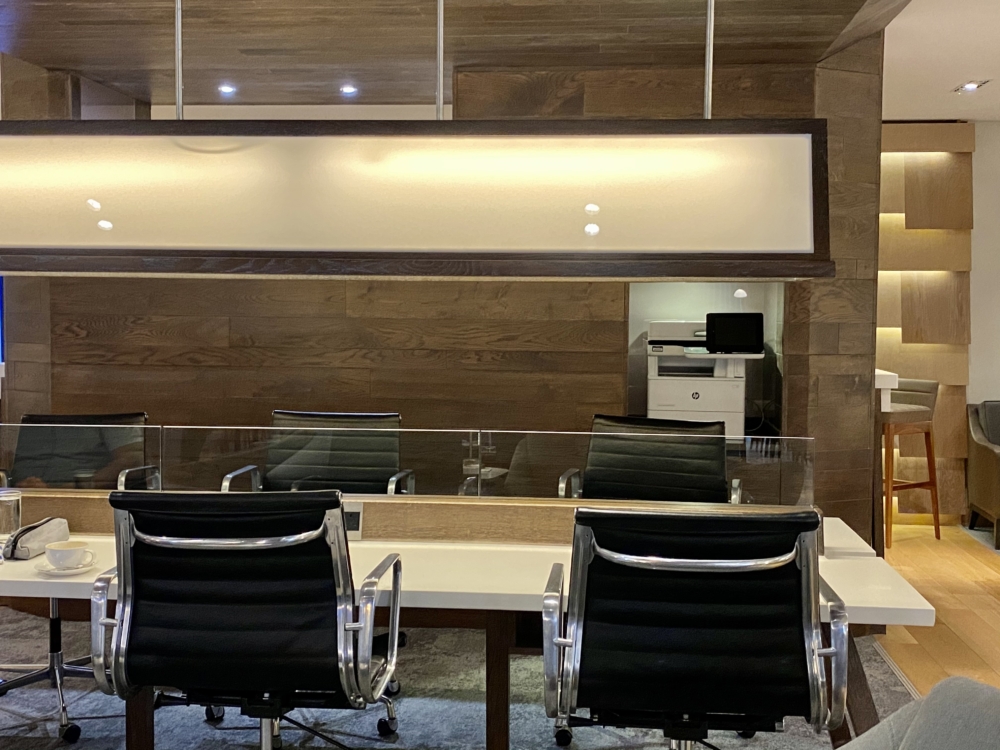 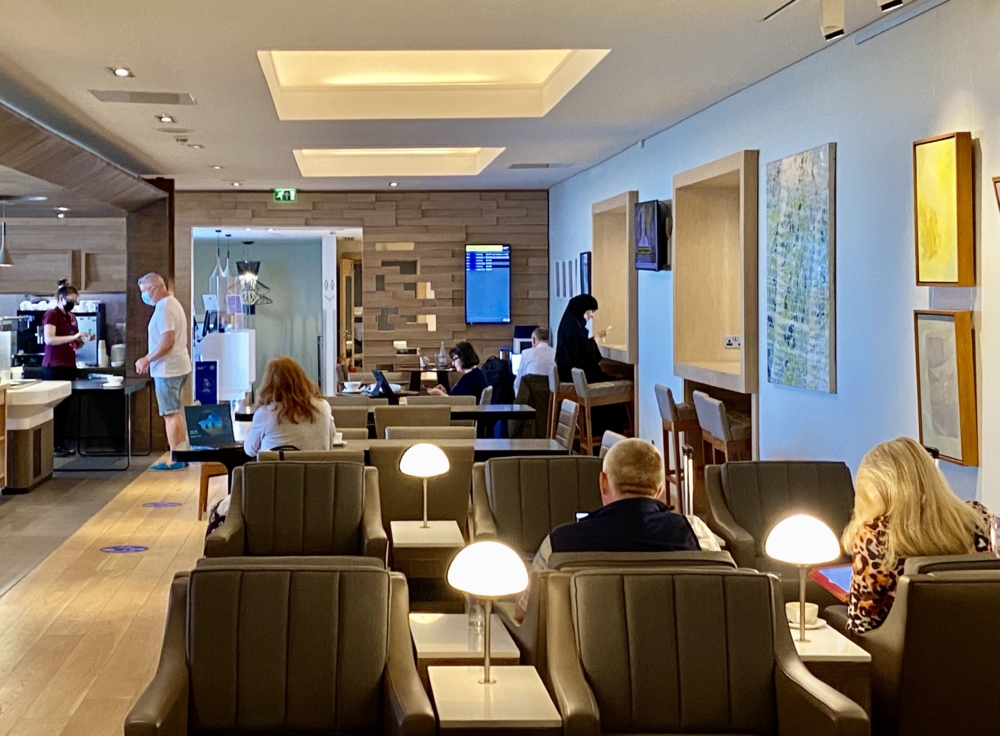 Unfortunately, the favored option of ordering food and drink to your seat using a QR code, like at Heathrow’s BA lounges, has not been implemented at Glasgow. Instead, passengers must head to the cordoned-off buffet area near the entrance to the lounge, where a staff member will happily serve you food and drink. 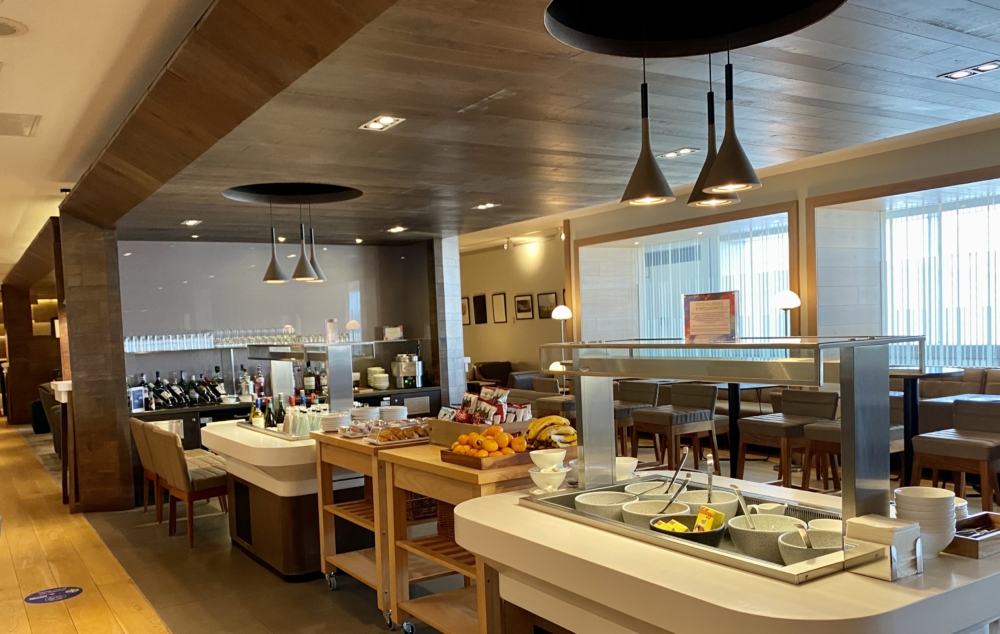 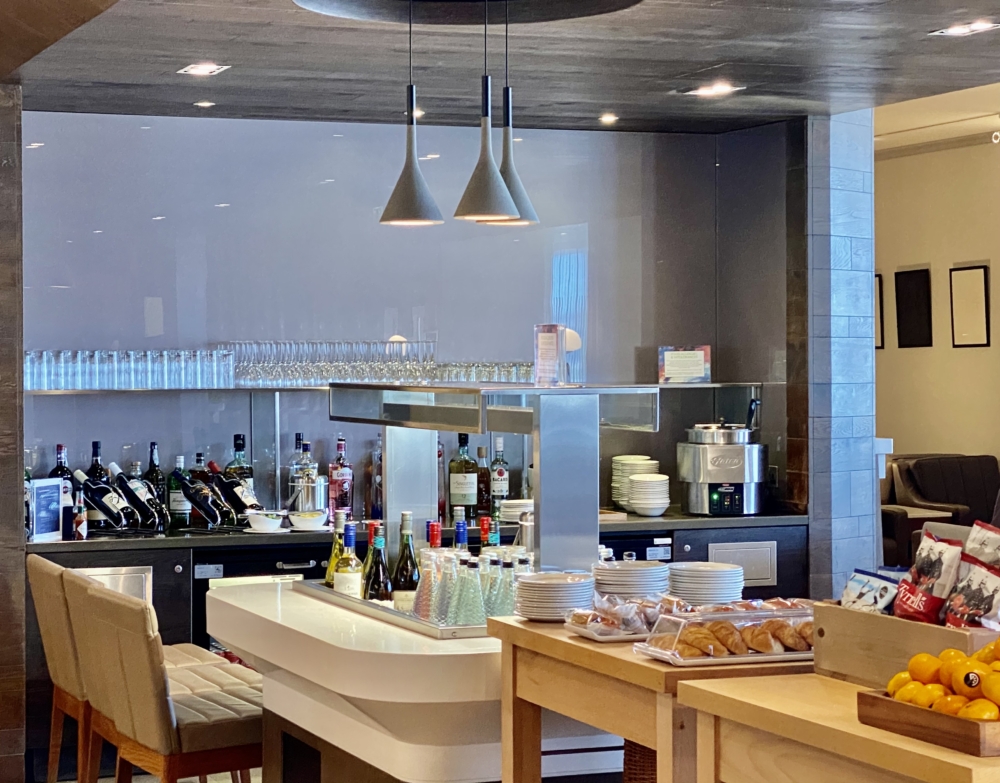 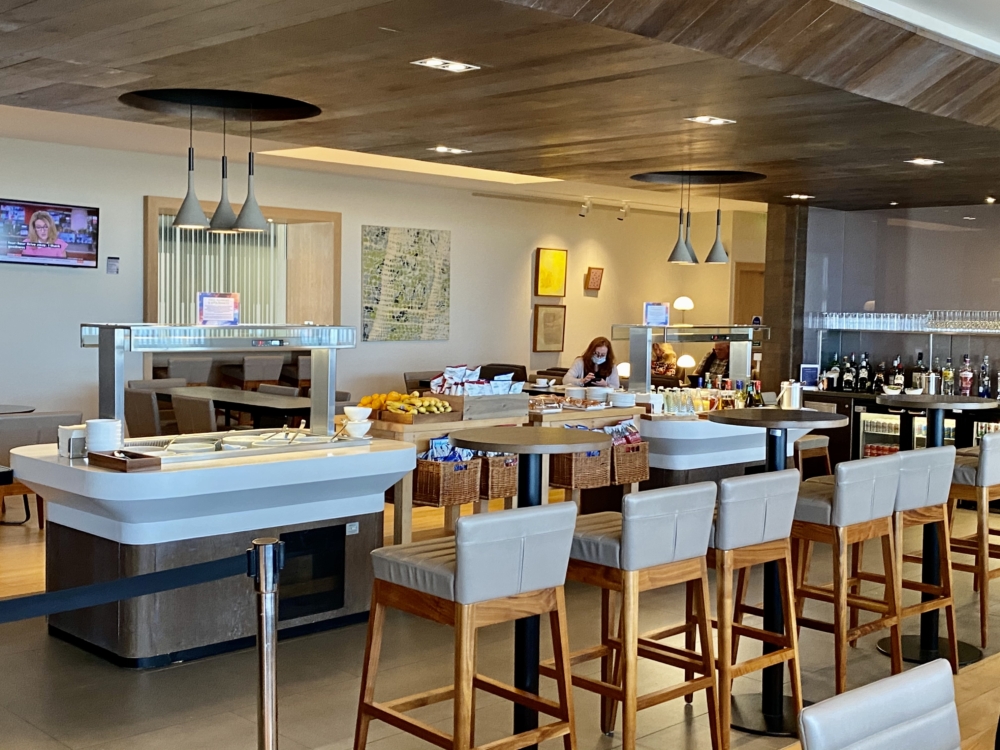 The food options were, well, not great. There were individually wrapped pain au chocolats, croissants, five types of cereal, crisps as well as bananas and oranges. That’s it. 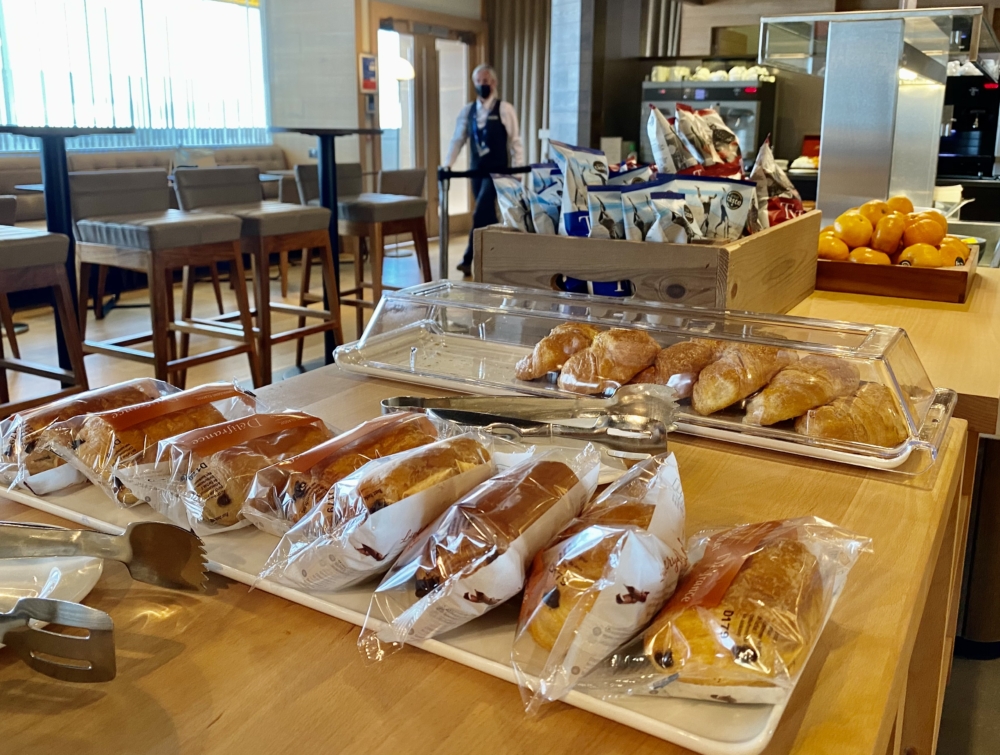 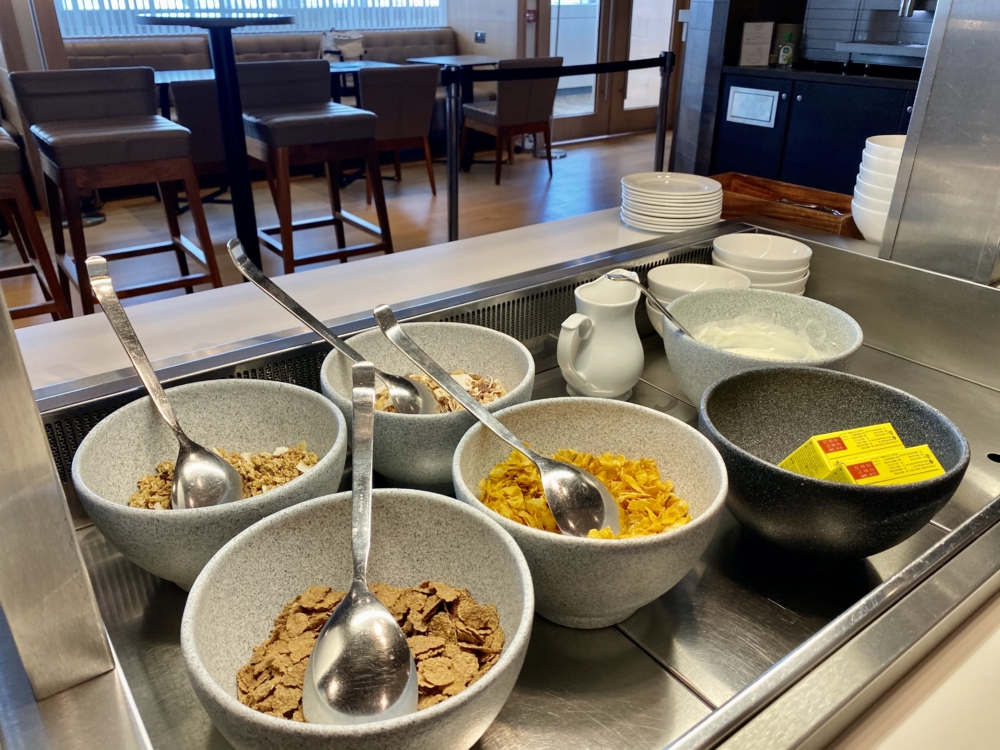 There are currently no hot options available.

As for drinks, there was a familiar selection of soft drinks, wine, beer, spirits, and, of course, bubbles. 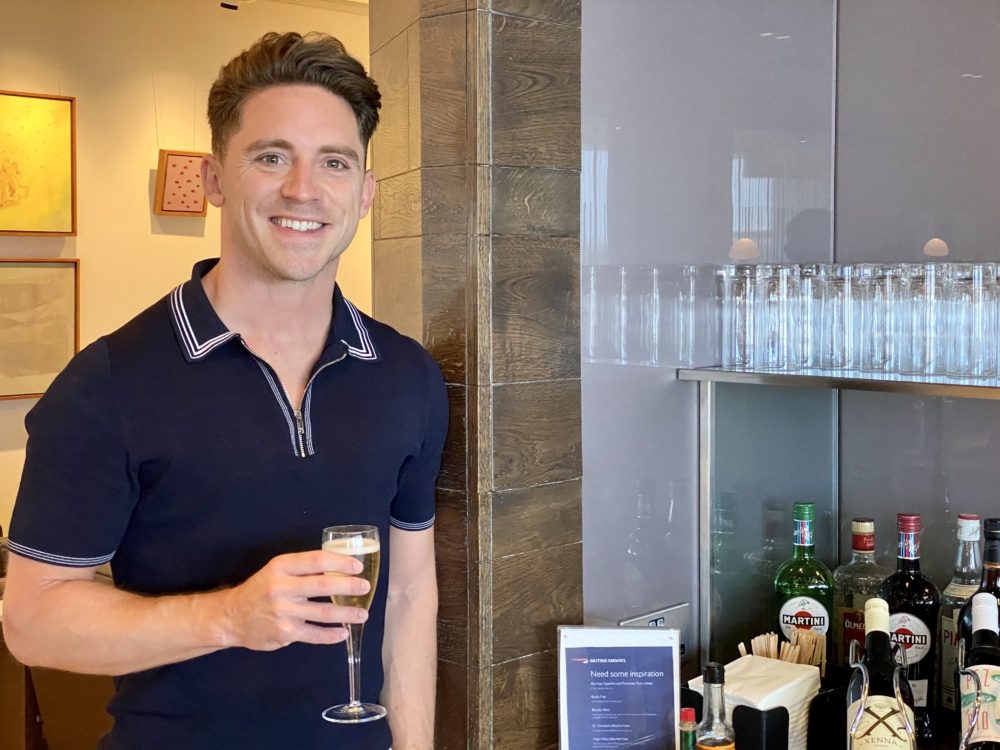 As it currently stands, if you’re flying economy but plan on paying a visit to the lounge using your Elite status, it might be advisable to pre-order something from the Speedbird café or buy something in the airport to take onboard with you.

Such is the case at Heathrow, reading materials still haven’t been brought back to the stands. However, Yvonne did ask if I wanted a paper. 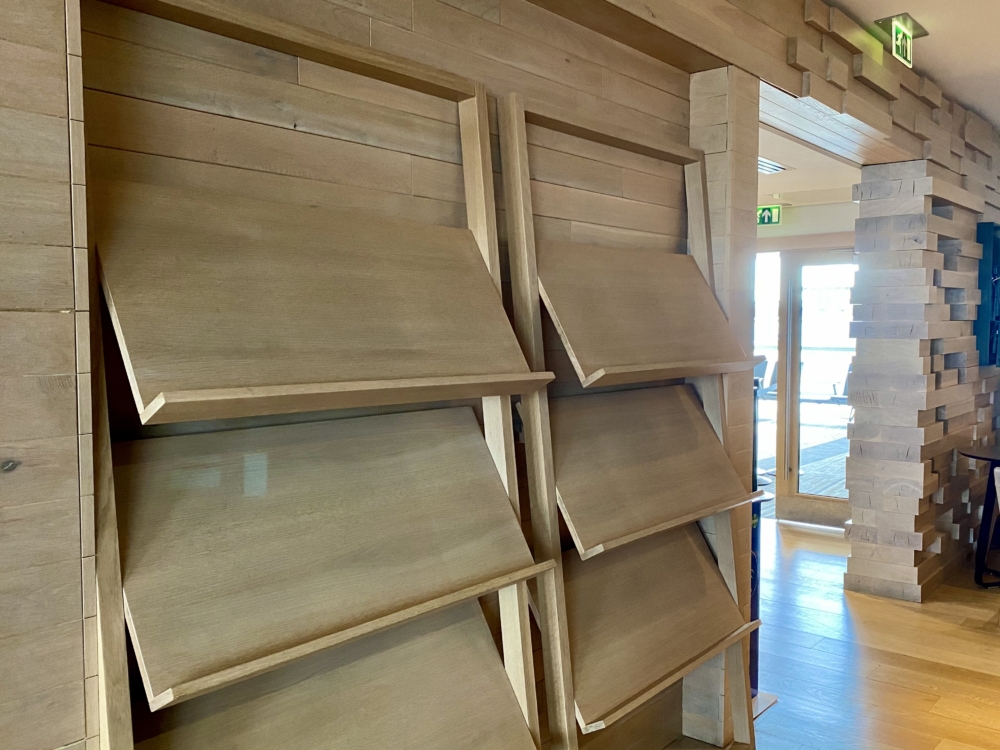 I usually like to sit in the “Bar and Snug” area of Glasgow’s lounge. It’s the coziest space and has the best views of the aircraft. Unfortunately, for now, it remains closed, though I did have a peek around the curtain. 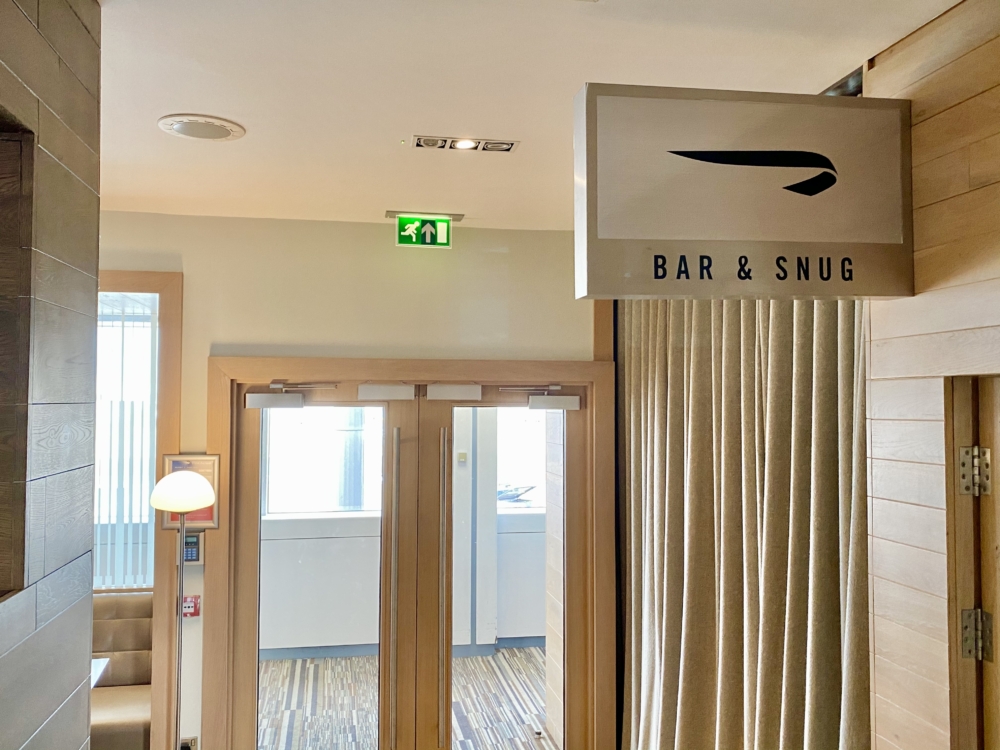 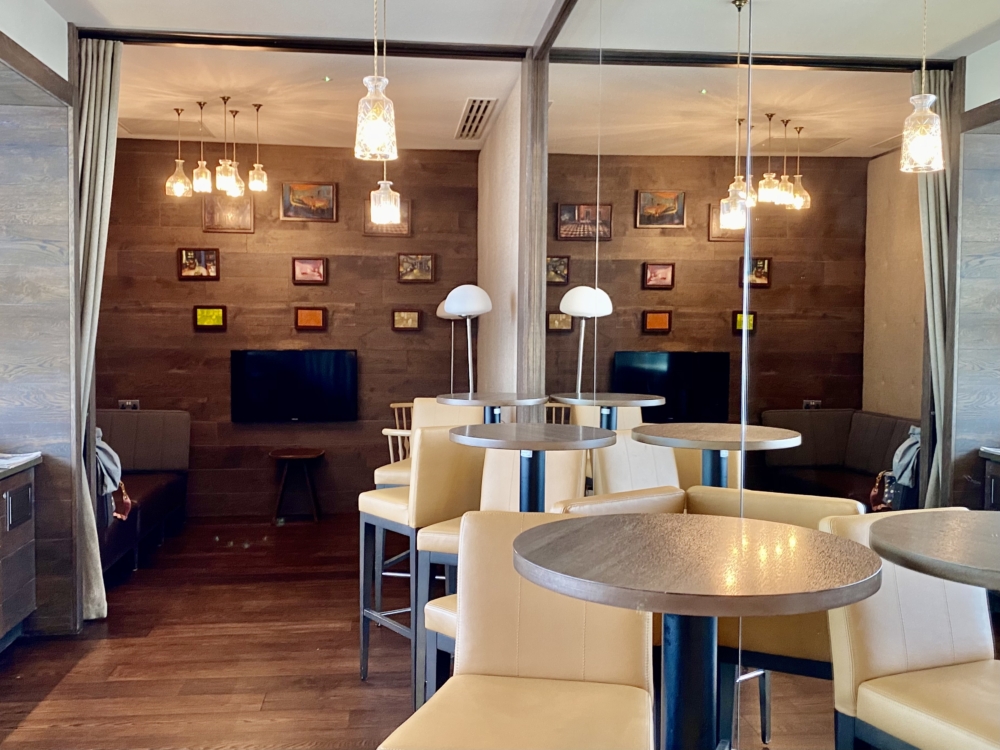 I didn’t hang around in the lounge for long as I wanted to make sure I got to the gate well in time for boarding. As I was leaving, a woman arriving at the lounge asked hopefully if it was really open. On the lounge agent’s confirmation that indeed it was, the lady responded, “Thank God for that.” Clearly, BA’s domestic lounges have been missed.

There were some nice views on the short walk from the lounge to the gate of British Airways, easyJet and Loganair aircraft. 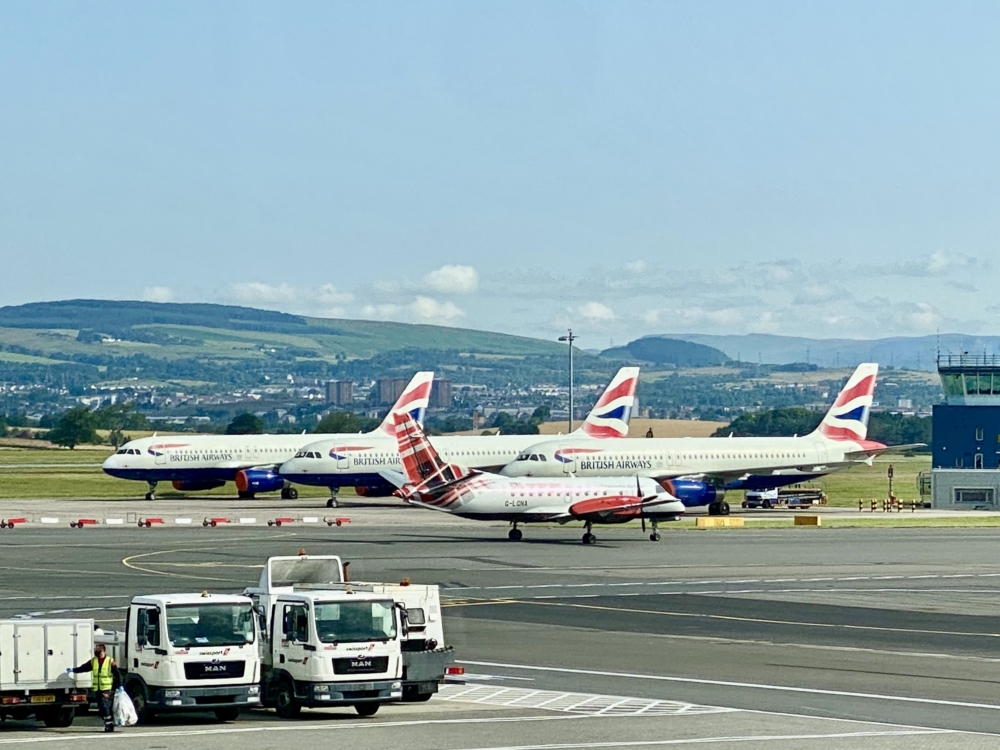 On arrival at gate 19, where flight BA1479 would depart, I assumed that the signage showing row numbers rather than priority groups was a mistake and that they just hadn’t been changed over yet. I was wrong. 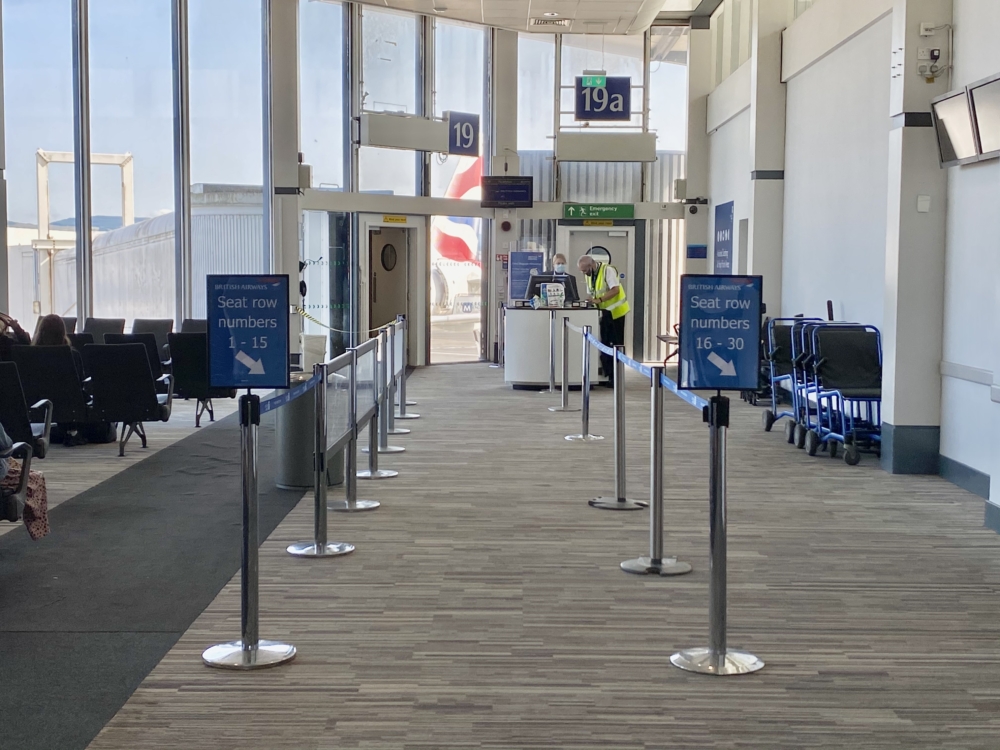 The gate agent announced that boarding would indeed start with those seated in rows 16-30, as per the signage.

Since my flight, several others have been in touch to let me know how their experience was on Monday. It would appear that only those who started their journeys at Heathrow were boarded by group numbers.

A British Airways employee even reached out to let me know that all crew had received internal communications on Monday morning about reverting boarding the pre-pandemic way. When I asked the gate agent why we boarded in seat row numbers, she replied by saying, “it’s to help with social distancing.”

When I boarded the 18-year-old Airbus A320 (registered G-EUUN), I was greeted by the friendly face of Dan Pickering, so I knew I was in good hands for my flight.

“Boarding complete” was announced well in advance of our scheduled departure time of 10:40. Monday’s small 5-row, 20-seat Club Europe cabin is the fullest I’ve experienced in all my pandemic flying. 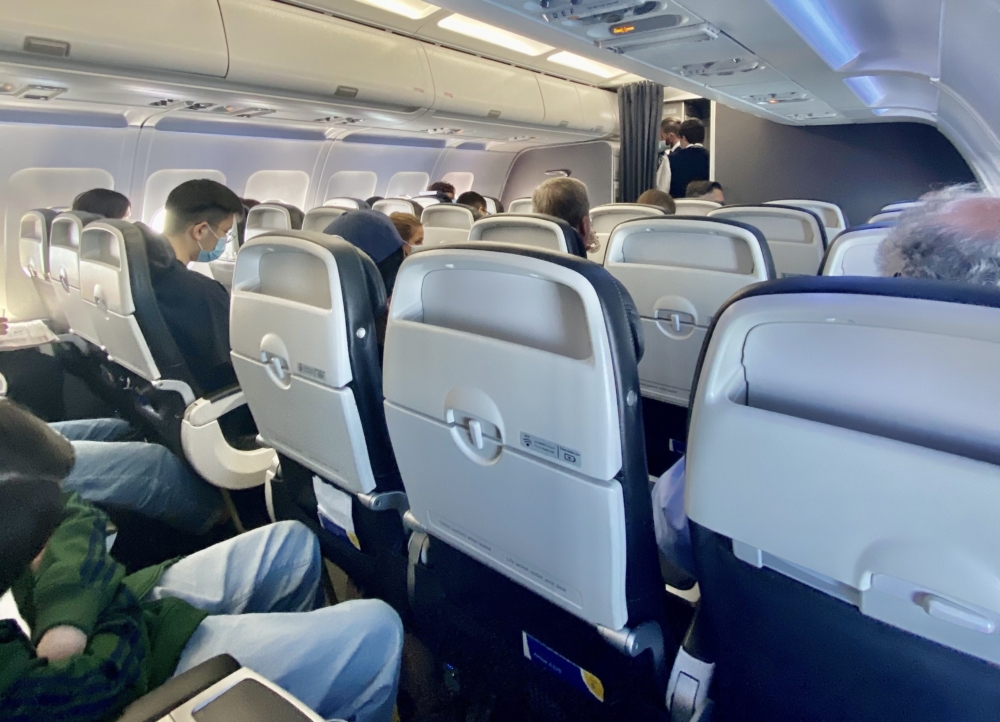 There were barely any free seats ‘down the back’ either. 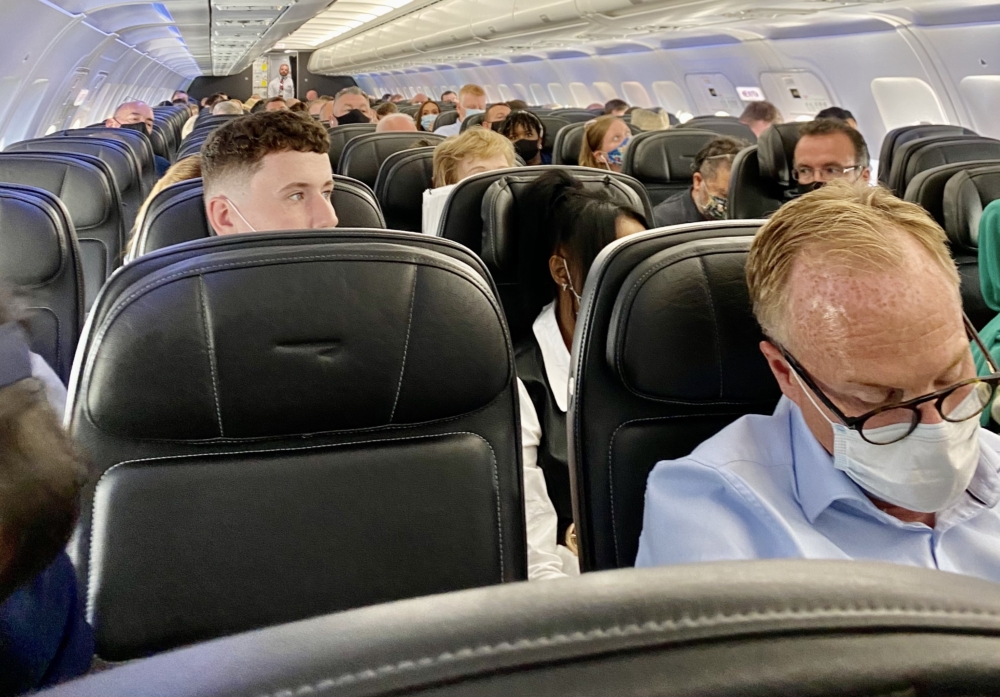 We pushed back a little behind schedule at 10:54 and the short taxi provided some nice wing views. 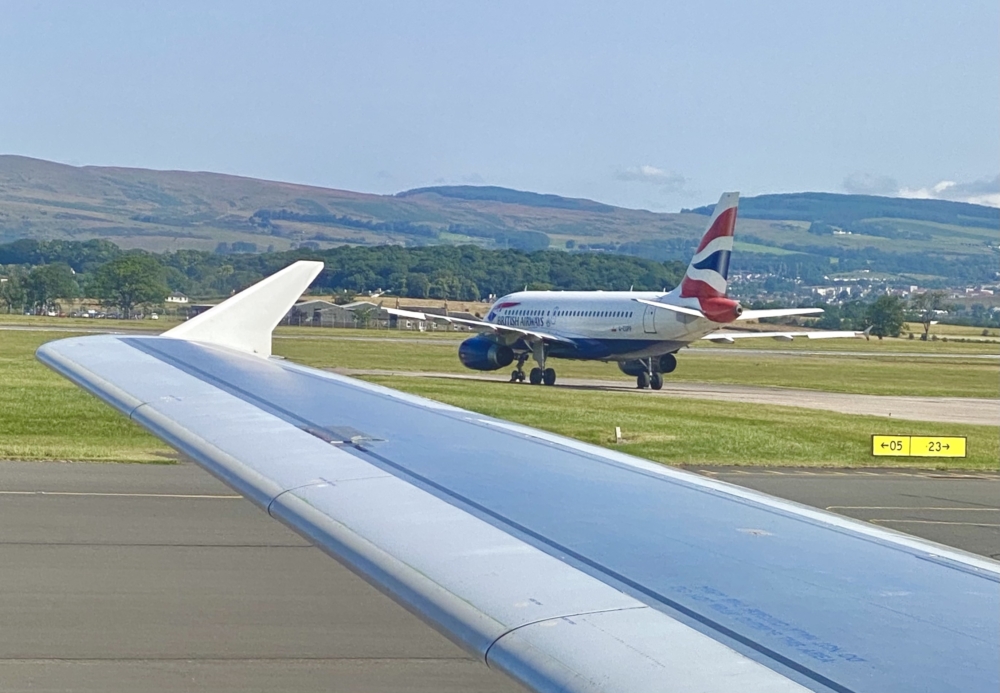 It was a perfect day for flying. We climbed out of Glasgow in a Southwesterly direction towards the coast before making a 90 degree left turn towards London. The views of the Scottish coastline and distant islands were quite spectacular. 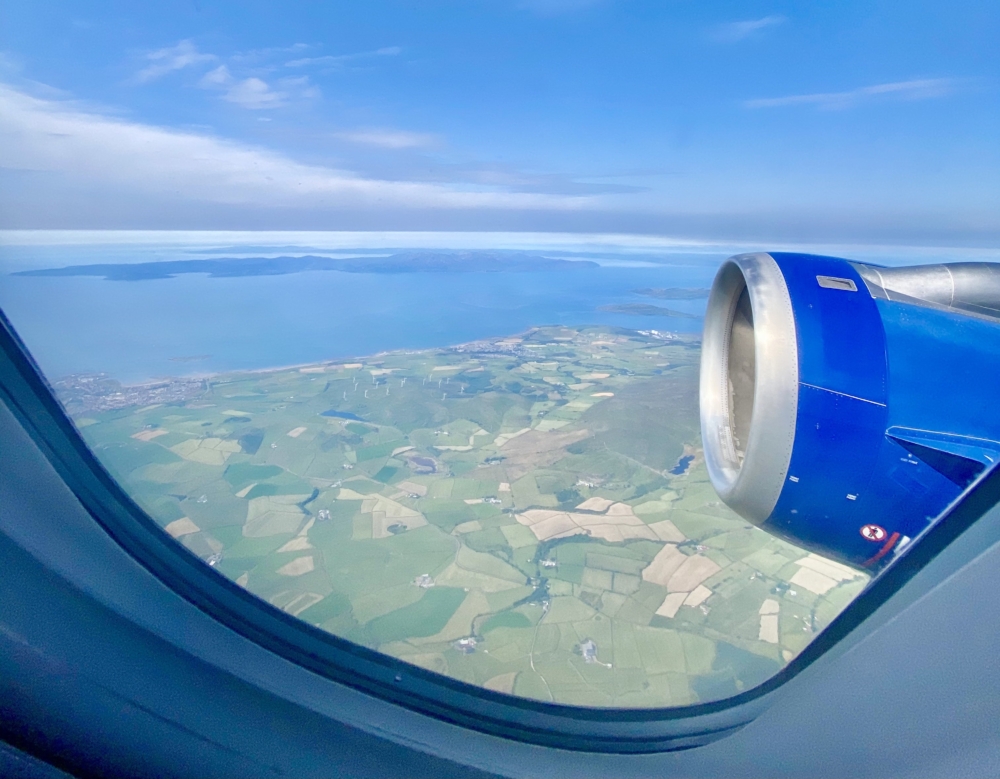 Once the seatbelt signs had been turned off, I was eager to see which food and drink options were available on the new buy-on-board menu via the in-flight WiFi. To order, passengers must connect (for free) to BA’s .air online homepage, where there’s an option to ‘view menu.’ I did exactly that and was surprised to see the message “The food and drink service is currently closed. We will be open soon to take your orders”.

Despite reports of buy-on-board’s reintroduction, due to short flight times, this improved service offering would not be available on some short-haul “express” routes to destinations such as Amsterdam (AMS), Brussels (BRU), Dublin (DUB), Jersey (JER), Manchester (MAN), Newcastle (NCL), Newquay (NQY) and Paris (CDG/ORY).

As Glasgow is not on that list, I was surprised that the option wasn’t available. A crew member informed me that the rollout is only starting on Band 4 flights to mid-haul destinations like Amman (AMM) and Cairo (CAI), but that he thought it would indeed be rolled out eventually to flights to and from Scotland.

No buy-on-board, no problem. I bagged myself a last-minute Club Europe upgrade for £59, which meant I’d benefit from a meal and drinks service. As I’m on a mission to earn Gold Status, paying £59 for an upgrade is well worth it for the valuable 40 Tier Points (instead of 10) that I would earn for the flight. Given that one-way, last-minute Club Europe flights from Glasgow can be over £300, I was more than happy to pay £59.

The food itself was more of a light snack than a meal. I opted for the Ploughman’s after not liking the look of the healthier option. I can’t remember whether it was quinoa or couscous, but it wasn’t doing it for me. 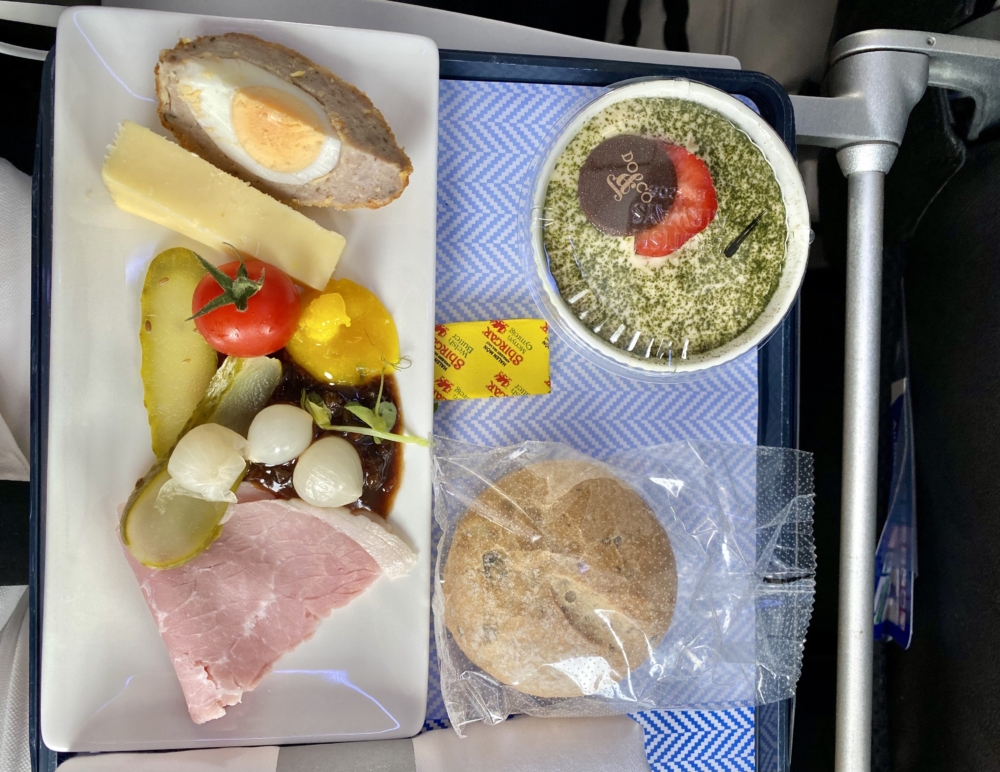 I washed my slice of Scotch Egg, slither of cheese and piece of ham down with a mini bottle of Nicolas Feuillatte Champagne and ate only the chocolate button from the top of the custard dessert. It just didn’t cut it in comparison to the incredible Do&Co chocolate mousse, which I had become used to.

We passed overhead Birmingham (BHX) and shortly started our descent towards Heathrow. 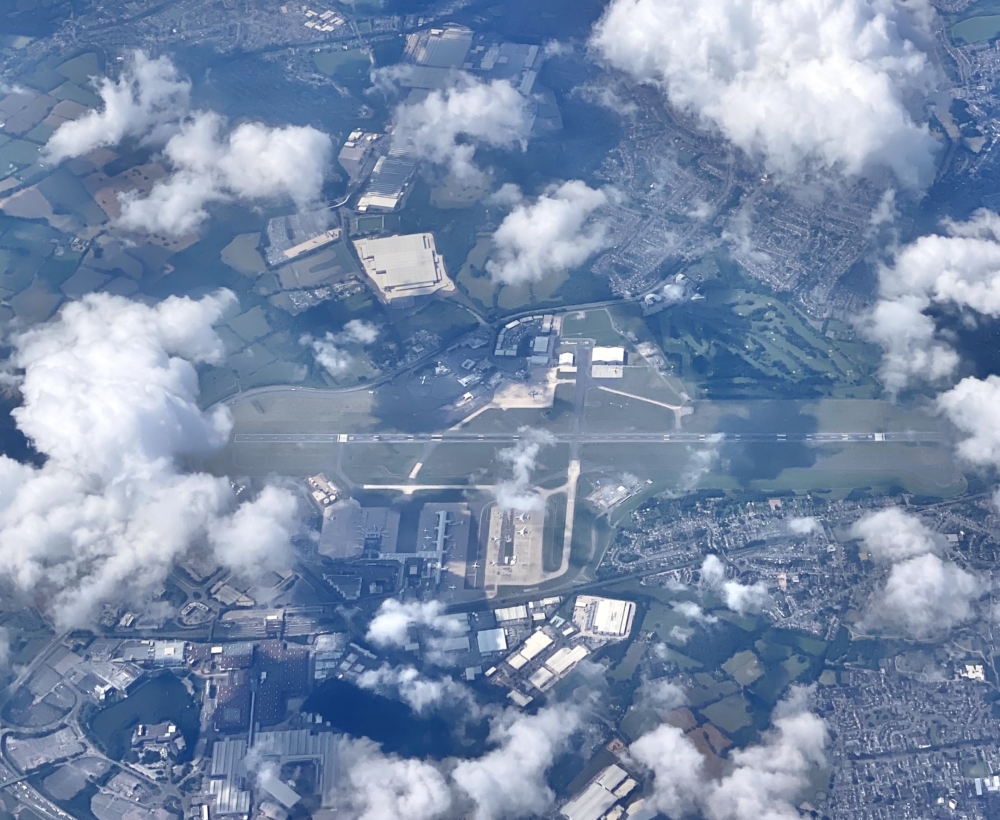 When approaching Heathrow from the East, which you do 80% of the time, you simply cannot beat the views of London from the right-hand side of the aircraft. The sky was hazy with a smattering of light cloud, but London looked just as stunning as ever looking down over the wing. 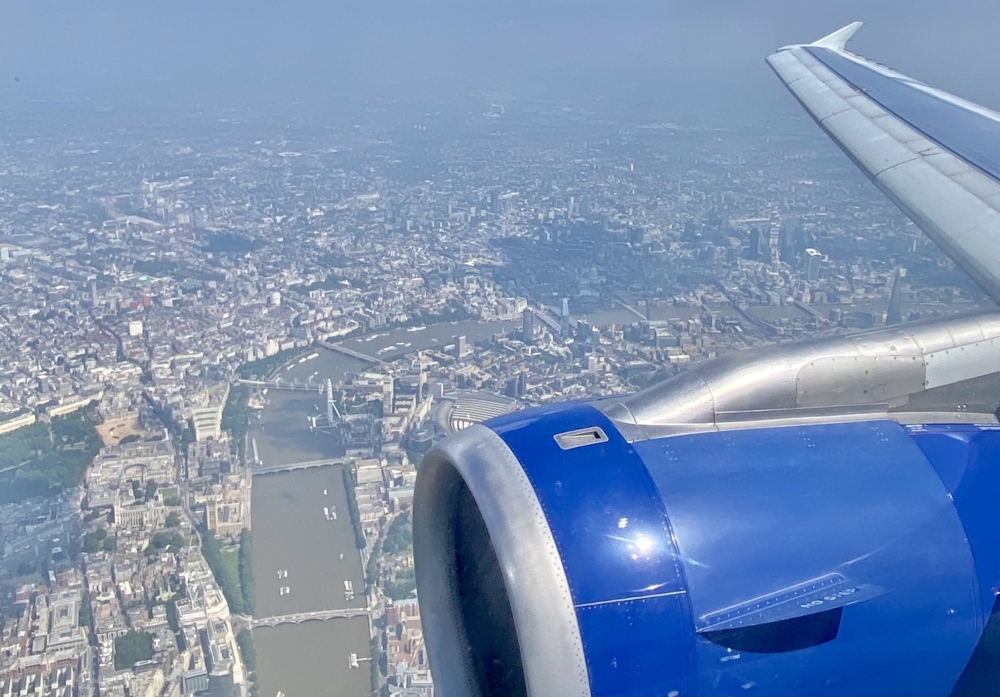 After a flight time of 57 minutes, we landed ahead of schedule at 11:52 and were on stand only a few short minutes later.

I thoroughly enjoyed being back in a British Airways domestic lounge. The lounge is a fundamental part of the Club, First and Elite status passengers alike. While I didn’t experience the return of priority boarding or the new buy-on-board on my flight, it’s great to see that both are slowly making a return to the British Airways experience.

Hats off to Dan Pickering and his crew. I hope to fly with them again soon. 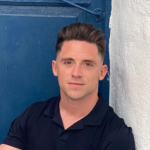 Freelance Journalist - Daniel has a Masters level education in aviation and an unrivaled passion for all things aircraft, airlines, and routes. He has over two years experience writing everything from industry news and deals to in-depth features on the quirky fifth-freedom routes and the best Virgin Atlantic seats. A keen linguist, Daniel enjoys keeping up to date with industry news in French, Spanish and Portuguese. Currently based in Durham, UK. 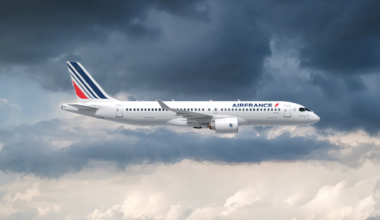 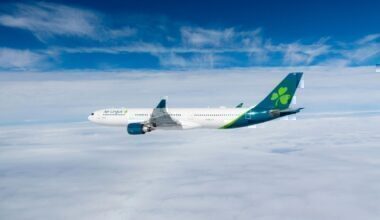 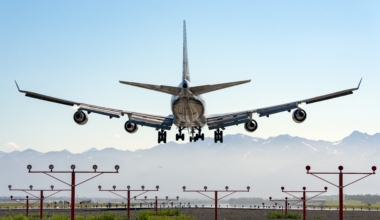 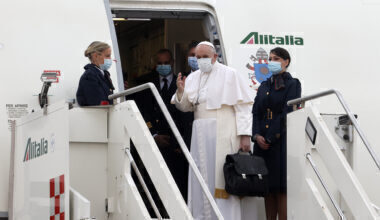