The Boeing 777X Could Be Turned Around In Just 30 Minutes

Boeing’s 777-9 will be capable of turn around times of just 30 minutes, according to the manufacturer. The turn around time is based on an aircraft with a 50% capacity at an en-route station, meaning necessary actions are kept to a minimum.

How long an aircraft takes to turn around is a crucial factor for both airports and airlines. For Airports, it means how long a stand will be occupied before another plane can use it. Meanwhile, for airlines, it means how long the aircraft is on the ground, not making money.

En route turn arounds are typically shorter than turn arounds at an aircraft’s home base. The reason for this is that some actions completed at the home base are good for two legs of the flight. The Boeing 777-9 will be capable of 30-minute turn arounds at en-route stations when 50% full, but how is that figure calculated?

Boeing publishes detailed information regarding its aircraft characteristics for planning purposes. While details of the 777-9’s characteristics are preliminary, they give a good idea of what Boeing is planning with the aircraft.

Once an aircraft arrives on the stand, it will take two minutes to position an air bridge and other relative equipment. As far as the cabin is concerned, it takes 17.3 minutes to offload passengers and service the cabin. Meanwhile, it should take 11 minutes to unload the aft cargo compartment.

Of course, many different processes are occurring when an aircraft is on the ground. The one that takes the longest is called the critical path. It doesn’t matter how quickly the other processes are achieved, as they won’t bring down the time.

In the case of an en-route turn around of the Boeing 777-9, the critical path is fueling the aircraft. Boeing estimates that it will take 24 minutes to fuel the plane with 25,000 gallons (94635 liters). An additional three-minute window is allocated either side to connect and remove equipment, giving the 30-minute critical path.

As such, 26 minutes is available to load and unload the bulk compartment. Meanwhile, passengers are allocated 9.8 minutes to board the aircraft. Boeing estimates that removing the jet bridge will take just one minute.

Turning around at a hub

Let’s take a look at a different example. What if an aircraft arrives and departs from a hub full to the brim? In this case, the turn around is more than doubled, with the critical path taking one hour and eight minutes. Again, this is fueling the aircraft, this time with 47070 gallons (178179 liters). This takes 62 minutes with six minutes to connect and disconnect the equipment.

The remainder of the aircraft servicing is relatively short. It takes just 10.3 minutes to replenish the potable water and 15 minutes to service the lavatories.

As far as cargo is concerned, the aft compartment takes 22 minutes to unload, and another 22 minutes to load. This stands at 26 minutes each for the forward compartment. Meanwhile, loading and unloading the bulk cargo compartment can take place at any time.

Moving up to the cabin, things start to get more interesting. For this example, Boeing is assuming that there are 414 passengers spread across two classes, but using just one door. With this configuration, the manufacturer believes that 40 passengers can deplane per minute, while 25 can board per minute.

As such, Boeing’s preliminary information suggests that it will take 10.4 minutes of passengers to deplane. Servicing the cabin starts when deboarding starts and lasts 34.5 minutes. At the same time, as the jetbridge is being attached, catering vehicles can also approach the aircraft.

One truck will service the 1st and 2nd right door taking 11.3 and 19 minutes, respectively. Meanwhile, a second truck will attach to door 4R, taking 33.4 minutes to service the rear galleys. Once the catering service is completed, 30.5 minutes is available to board passengers.

Of course, as this is preliminary information, it is subject to change. Individual airline configurations will vary, and likely won’t be quite as full as the latter scenario.

What do you make of the Boeing 777-9’s turn around time? Let us know your thoughts in the comments! 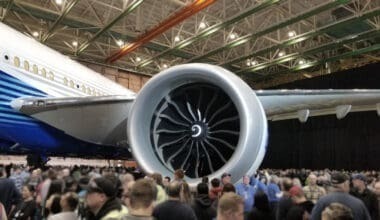 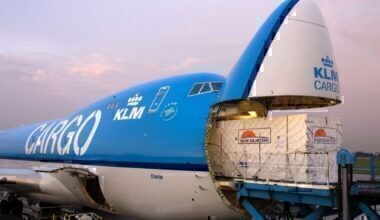 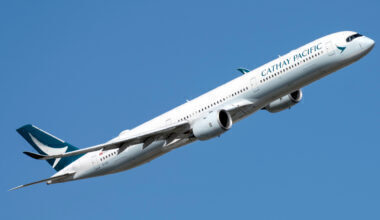 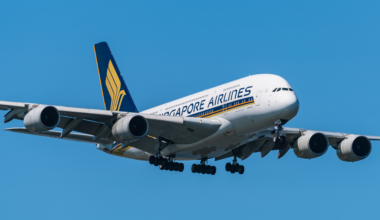 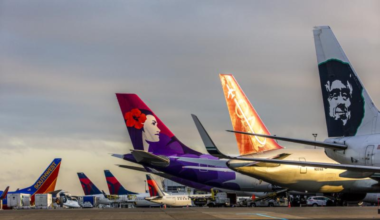 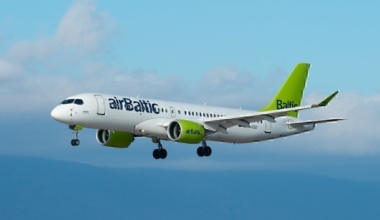