There has been plenty of excitement regarding the 777X program since it was announced in 2013. Many airlines were looking forward to getting their hands on the 777-8 and 777-9 jets. However, there has been a shift in the industry this year, which has impacted the introduction of the widebodies.

At the end of July, Boeing announced that there will be a delay to the 777X program amid the pandemic. Ultimately, the target is to get the plane into service once passenger demand picks up again.

The initial hope was for the plane to join fleets as early as next year. However, the manufacturer now expects the first delivery to take place in 2022. There have also been production issues this year amid suspensions brought on by the global situation. So, this delay should give enough time for the industry to regroup somewhat.

Will still be valuable

Airlines are having to shake up their fleets amid the global health crisis. However, several carriers have shared that the 777X will remain an integral part of their operations with their new strategies.

For instance, this summer, Qatar Airways spoke about how the plane will play a part in the new era. The airline’s CEO, Akbar Al Baker, said that business seating on board will give passengers full privacy.

Additionally, this month, he said that the deliveries of the jet will arrive in Doha from 2022. These units will continue to join through to the end of the decade.

Al Baker is actually glad that there are delays as his company would have been taking deliveries during the downturn. Nonetheless, there are still some operators that are considering deferrals, such as Cathay Pacific.

Meanwhile, there could be more customers of the 777X in the next few years. Earlier this month, Ethiopian Airlines CCO Esayas WoldeMariam told Simple Flying that the plane is something that it will definitely consider.

The airline is a fan of the jet’s new technology, cabin architecture, modern components, capacity, and larger windows. Moreover, the executive emphasizes that the aircraft has a latecomer advantage.

Speaking of the abilities of the plane, it was highlighted this month that the 777-9 would have a turn around time of just 30 minutes. This duration is based on a unit with a 50% capacity at an en-route station.

When it comes to the cabin, it would take 17.3 minutes for travelers to disembark and for the cabin to be cleaned. Furthermore, it is expected to take 11 minutes to unload the aft cargo compartment.

Boeing also shares that it could take 24 minutes to pump the plane with 25,000 gallons (94635 liters) of fuel. It is also giving a three-minute buffer either side to connect and remove equipment.

Altogether, the most significant update in the last few months is that the 777X will be delayed by a year. However, airlines won’t be concerned about this as it actually gives them more time to restructure and introduce the plane after business starts to pick up again.

What are your thoughts about the Boeing 777X aircraft? Are you looking forward to hitting the skies with the plane this decade? Let us know what you think of the jet in the comment section. 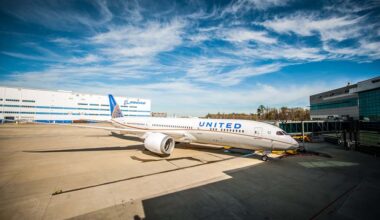 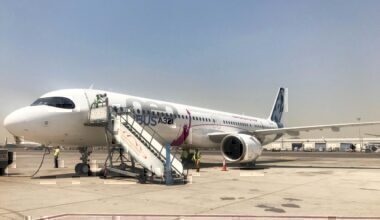