Bombardier And Mitsubishi In Legal Stand-Off Over Technology

Bombardier and Mitsubishi are heading for a big row in the courts after Bombardier accused the Japanese industrial giant of deliberately targeting its employees to steal proprietary secrets. The information was used to help with the certification of the Mitsubishi MRJ regional jet.

The Bombardier lawsuit filed on October 19, 2018, in a Seattle federal court,  lists as defendants Mitsubishi Aircraft Corporation MITAC and its US-based subsidiary MITAC America, and the Aerospace Testing Engineering & Certification Incorporated AeroTEC. The defendant’s list also includes several ex-employees of Bombardier. In the suit Bombardier is seeking the following:

According to the lawsuit the former employees are sharing information that negatively affects Bombardier:

“The company faces significant harm from its competitor’s access to its trade secrets and confidential information. We have strong evidence to support that Bombardier trade secrets were misappropriated and are being used for the certification of the MRJ Regional Jet.”

According to Aero Space Testing International Bombardier also alleges Mitsubishi aggressively targeted its employees, with billboards placed outside its flight test center, emails, and even a job fair near the company’s headquarters. The campaign resulted in Mitsubishi poaching 92 employees from Bombardier. 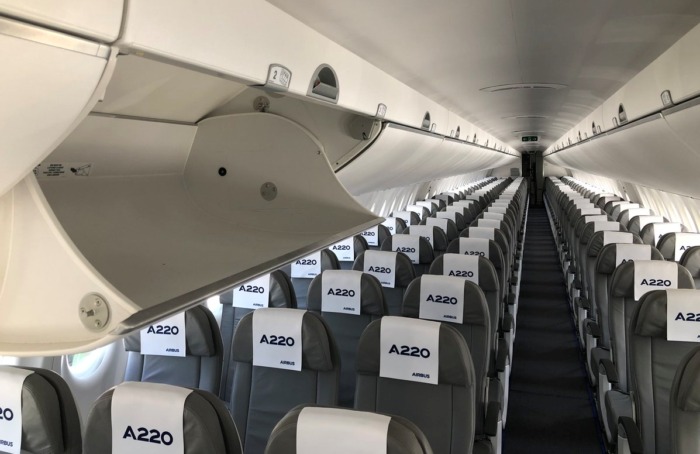 Airbus A220-300 seating. Not Surprisingly Mitsubishi has completely rejected the allegations in the Bombardier lawsuit, calling them baseless and without merit.

It is hard to see how this case will play out, after all, laws against the restriction of trade may come into play, as well as the fact that Bombardier did not have a no-compete clause in its employee contracts. On the other hand, the documents issue could be quite problematic since it almost amounts to corporate espionage. Clearly, Bombardier is motivated by profit, than any other point of principle. The company alleges in the suit, it will now have to compete with a  revived Japanese aviation industry several years before it should have.

One a final note, you do have to wonder about the culture at Bombardier, for a competitor to poach 92 highly skilled employees things must be less than harmonious at the company.