British Airways operate a fleet of 30 Boeing 787 Dreamliners, on their longer and thinner routes from their base at London’s Heathrow Airport. 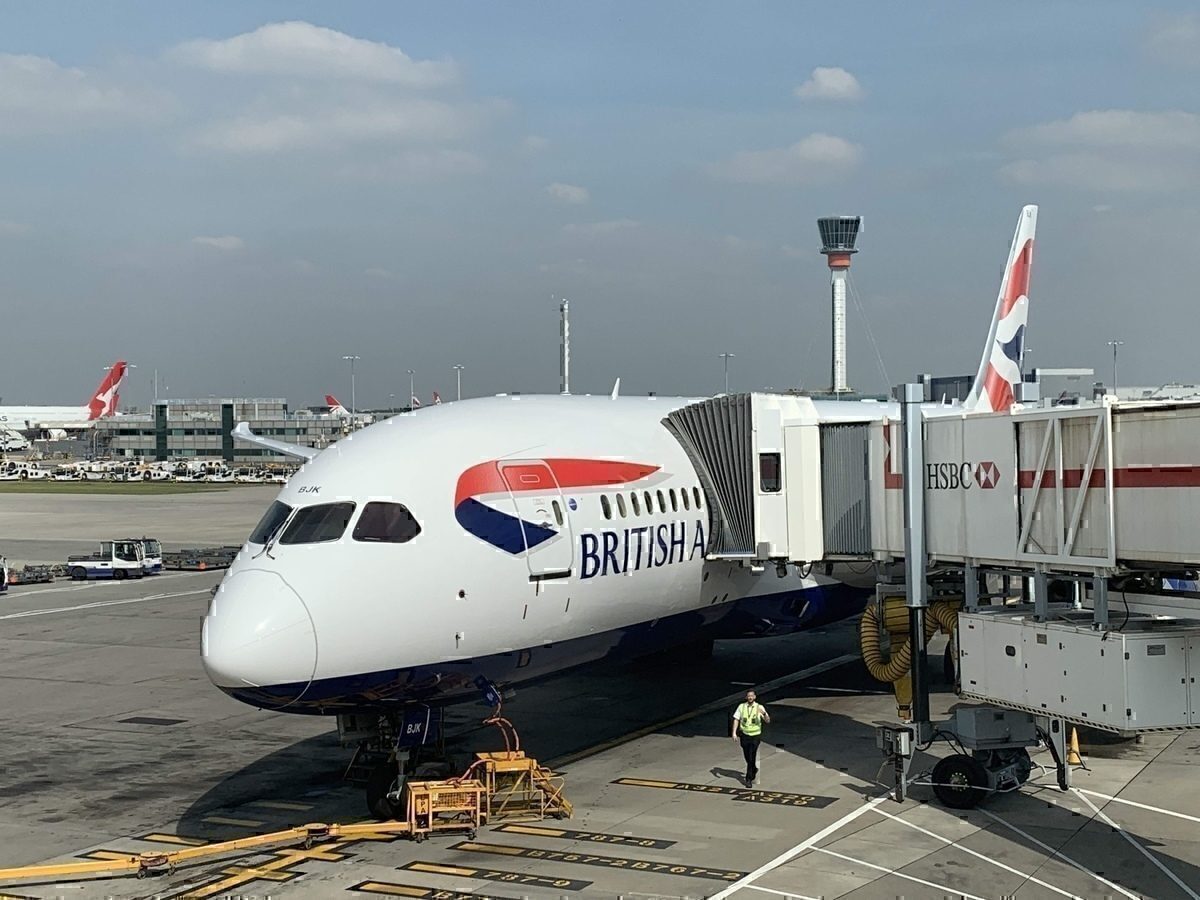 Although British Airways is one of my most flown airlines, strangely I’ve never flown long haul business class with them. I took the opportunity to get an Avios redemption for a flight from Calgary, Canada to London.

I arrived at a very chilly Calgary International Airport earlier that day after taking the inaugural WestJet transatlantic flight from London Gatwick. Despite being spring and almost May, it was only +3C here in Alberta, with snow visible on the ground on our arrival! 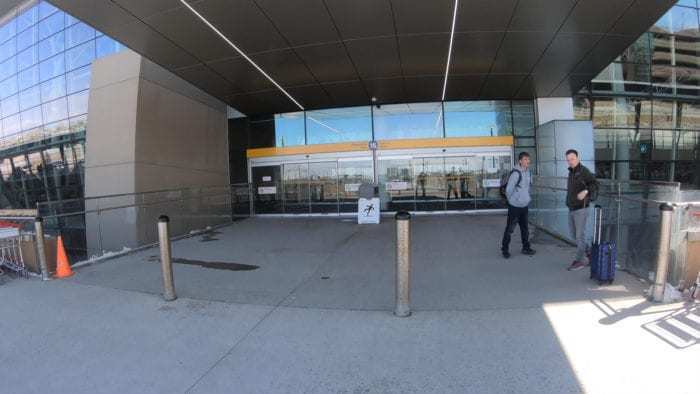 The international terminal at YYC is very modern, having opened in 2016. In the early afternoon it was fairly quiet. 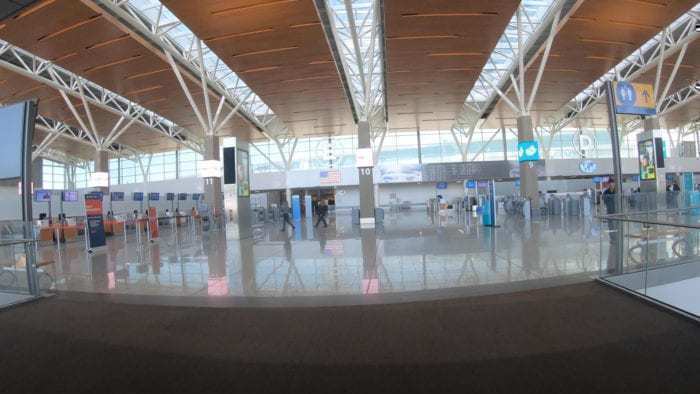 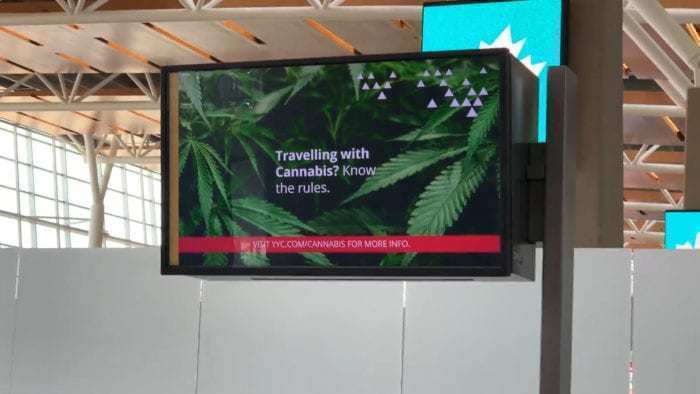 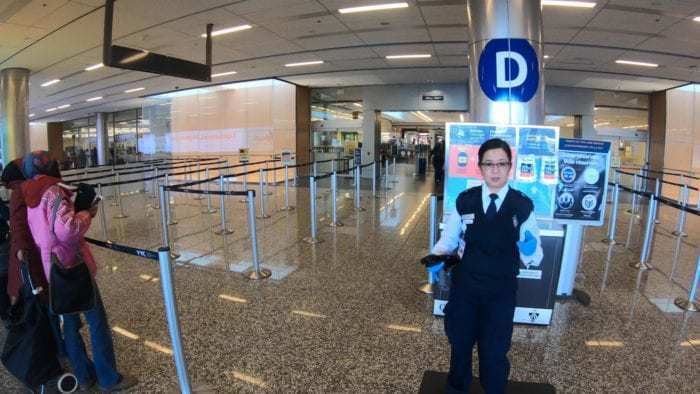 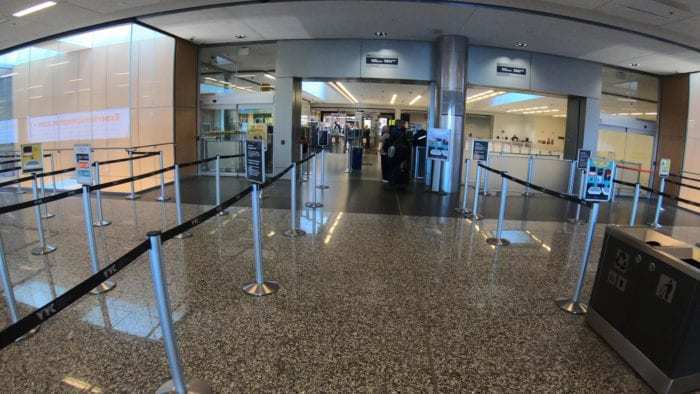 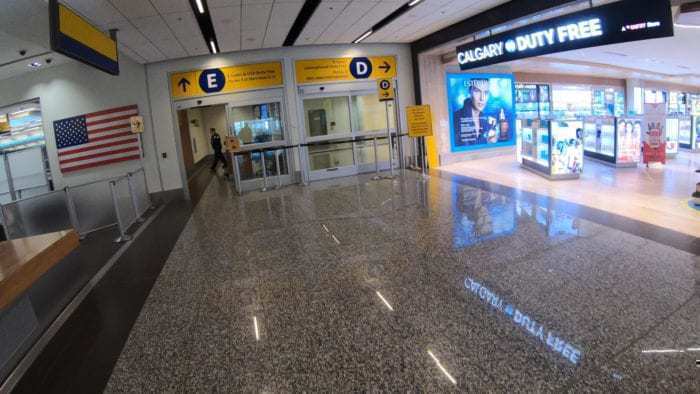 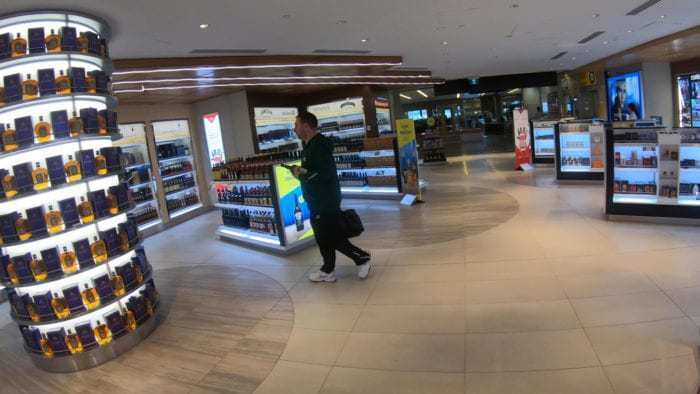 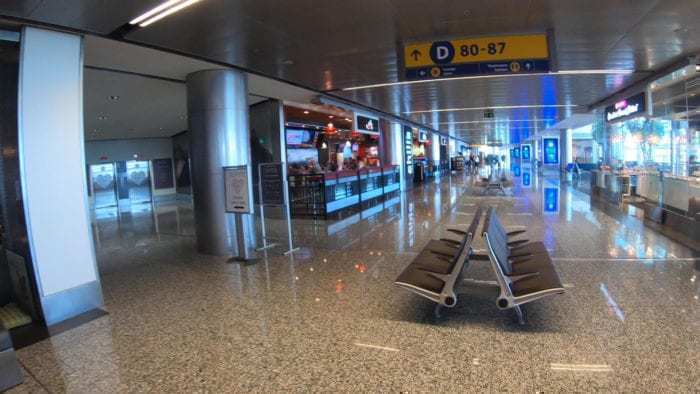 Once past security, I headed for the Aspire Lounge. There is an Aspire Lounge in both the D and E concourses, but these are the only lounges in the international terminal. 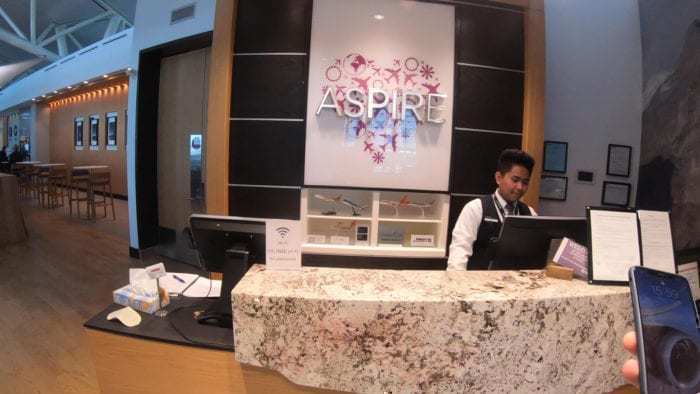 The Aspire Lounge has no airside views, but it is pretty bright and spacious.  It extends most of the length of the departure lounge with plenty of seating areas.

I did find it a little noisy. There weren’t really any areas to escape the noise from the TVs that were blaring out ‘Jeopardy’ and groups of loud passengers. 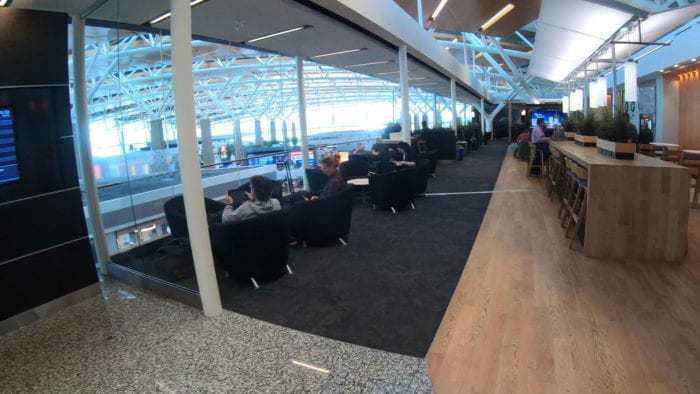 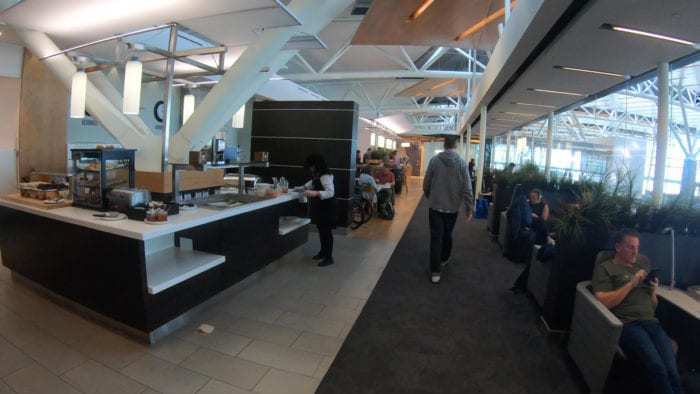 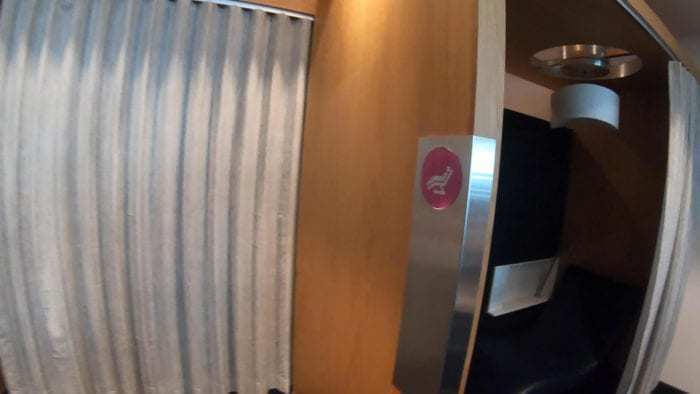 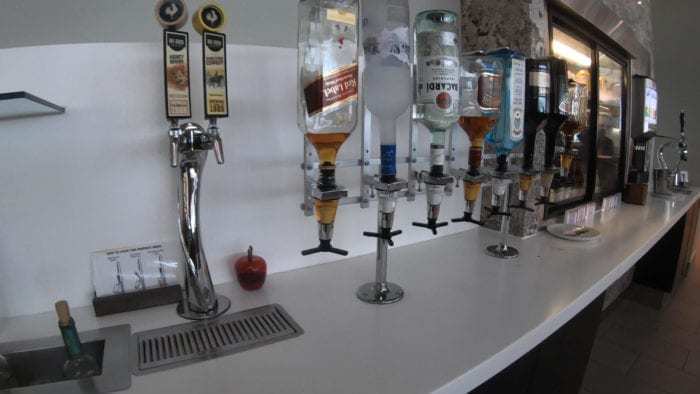 My flight today was departing from gate D76. British Airways had advised me a couple of days previously that the flight was delayed.  At its worst, the flight was three hours late, but after numerous aircraft changes the delay was reduced to 40 minutes.  I was pretty pleased at how often BA kept me updated on the delay; every couple of hours I received an email with the new estimated time, meaning I had plenty of notice. 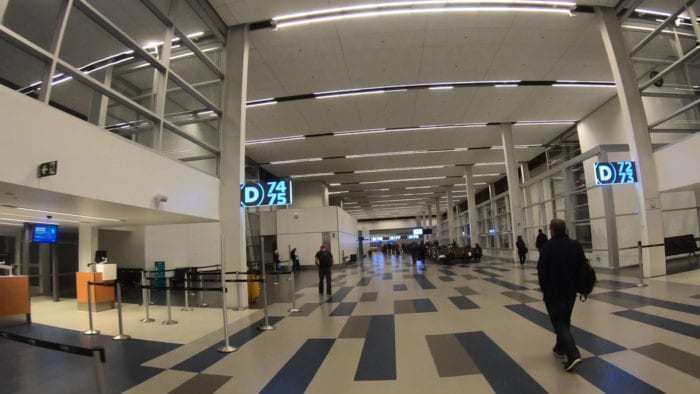 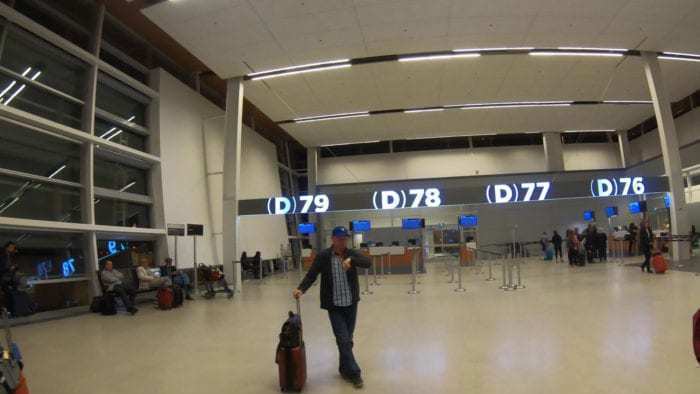 We were called for boarding around 40 minutes behind schedule, and I made my way to the waiting aircraft. 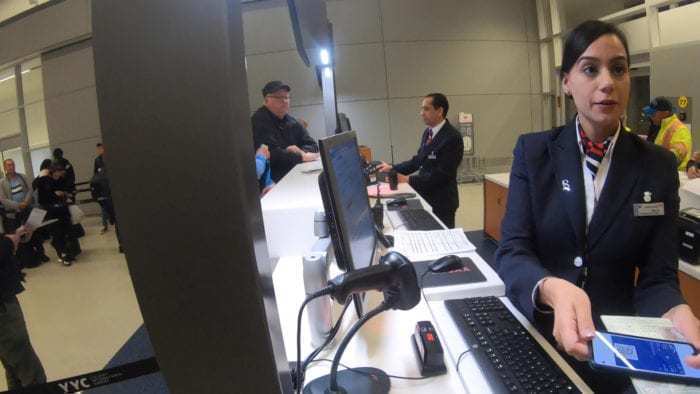 British Airways crew have always been great in my experience – in particular in Club World/Club Europe.  Tonight was no exception; the welcoming smiles and professionalism continued throughout the flight. 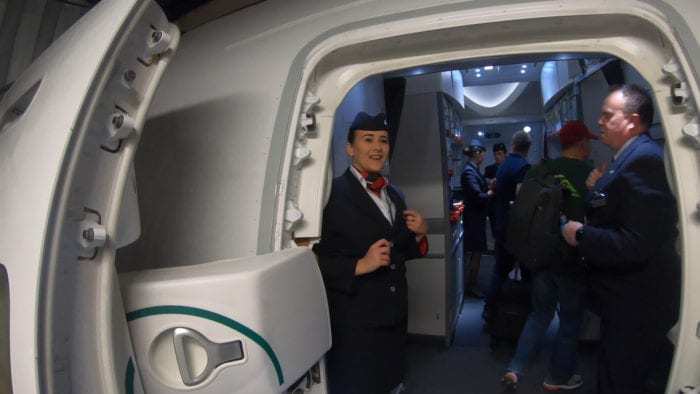 Club World on the Boeing 787 has exactly the same configuration as most of BA’s other long haul fleet – with the Yin/Yang rear facing seats on the window sides. I quite enjoy travelling backward as it gives a great view of the wing and always feels slightly more ‘exclusive’! 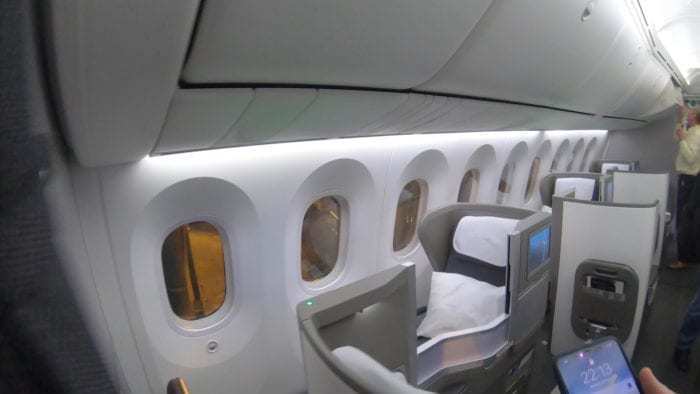 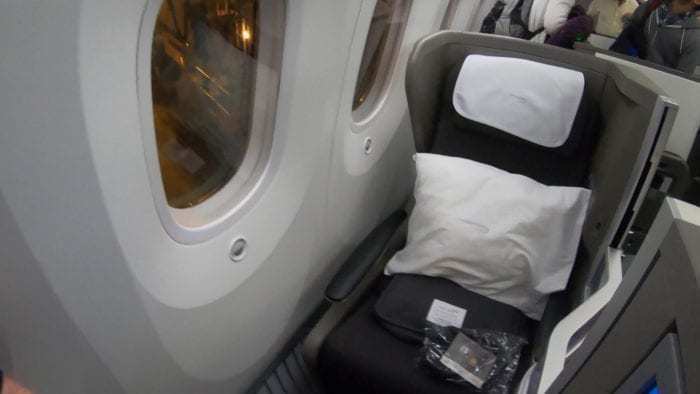 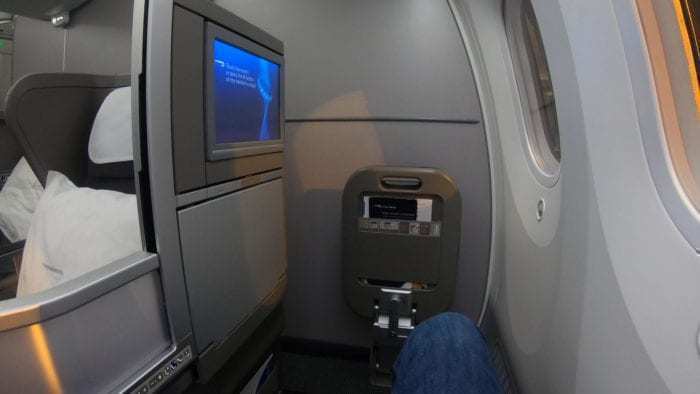 The seat is the standard lie flat type, with an ottoman needing to be dropped to support the feet.  Unfortunately mine appeared broken and even putting a bag on the ottoman resulted in it dropping past it’s lowest position.

We taxied to the runway, departing into the frosty Alberta night. 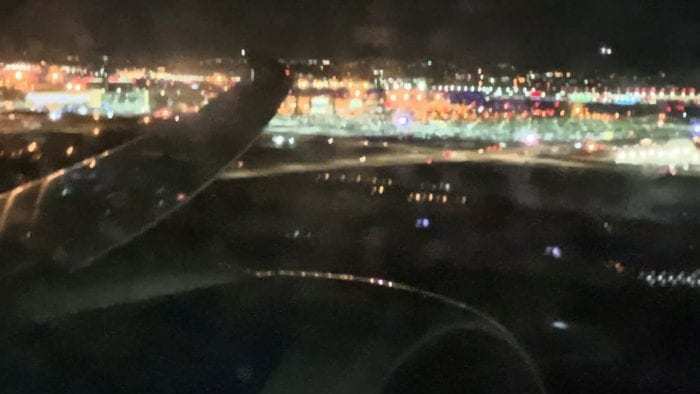 I didn’t take any food for dinner as I needed sleep, and put the bed down to sleep as soon as the seatbelt signs went out. I got a pretty good night’s sleep and woke around six hours later, when we were a little over two hours from Heathrow. 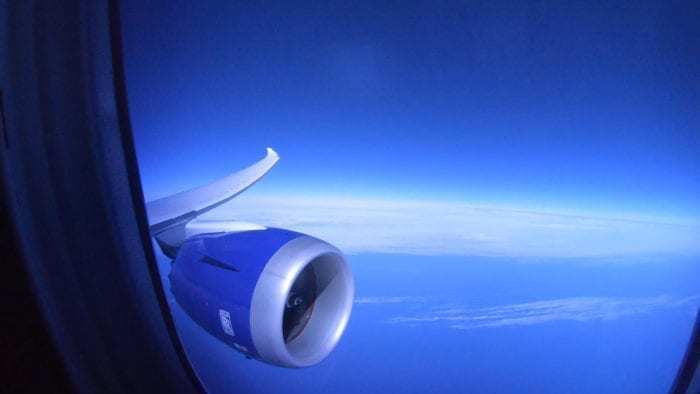 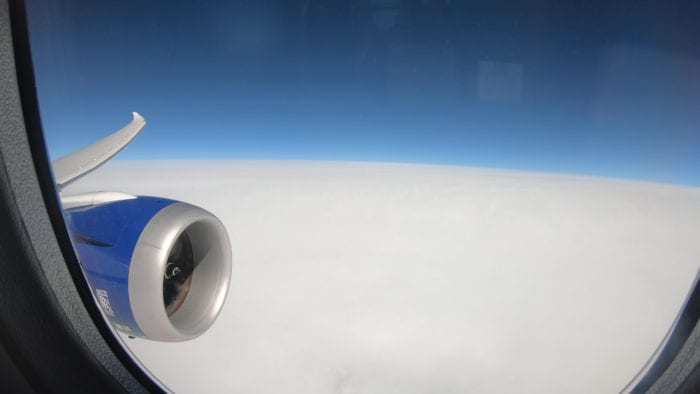 Breakfast service was starting as I woke up – I’d pre-ordered a breakfast roll the night before which arrived about an hour before landing. 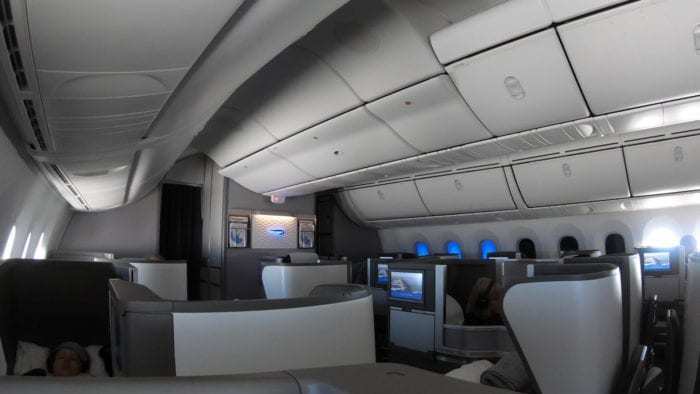 We commenced our descent and landing towards Heathrow, getting some great views of the English countryside on approach. 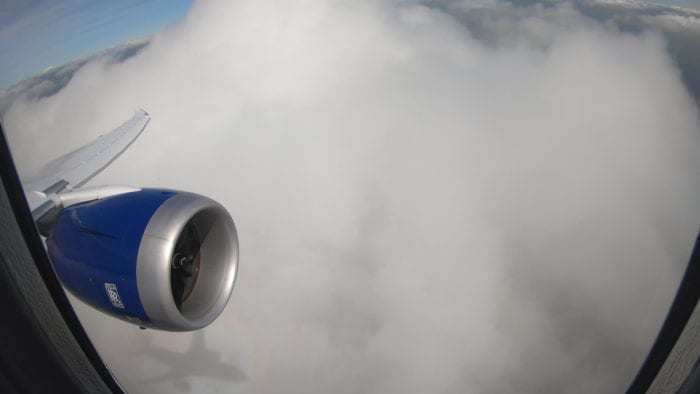 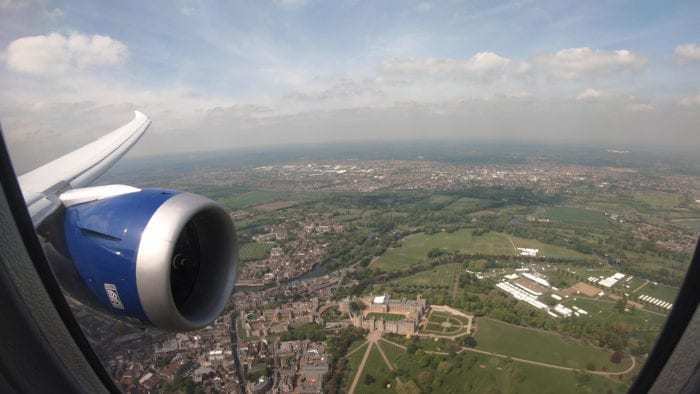 Overall I love BA’s soft product in Club World. The crew are amazing, the food, bedding and amenity kits are all top notch.  The seats are pretty tired, even on this six month old aircraft – and the lack of WiFi on the 787 I find pretty frustrating (considering that they’re rolling it out on older Boeing 747s). I’m really looking forward to trying BA’s new Club World product onboard the Airbus A350 later on in 2019.