Cathay Pacific reports an 11.3% drop in passenger numbers for August. The airline expects September to be just as lackluster, and intends to take short-term “remedial measures” to counter the tepid performance.

Cathay Pacific is the airline worst affected by the continuing anti-government protests in Hong Kong. A drop in visitors to the island and other forces on the periphery of the troubles have caused the carrier’s executive to look hard at how best to ride the storm.

South China Morning Post reports that that Cathay’s overall passenger numbers fell by 38% in August. This as violent struggles between protesters and police steered tourism away from the city.

“In the biggest decline for a decade,” writes the Post, “Cathay Pacific carried 11 per cent, or 370,000, fewer passengers in August year on year, with a total of 2.9 million customers flying worldwide. Its planes were 79.9 per cent full, the monthly traffic report revealed.”

The trend looks set to continue well into September as protesters and police continue to clash. Disruption across the city and to its airport and hotels is turning Hong Kong into a no-go destination.

Official tourism figures show a 40% decline in the number of visitors to the city in August. In response to the synchronized decline in its passenger trade Cathay said it would make changes. These may include “unspecified cuts to routes in the short-term,” according to the Post.

“Specifically, we are reducing our capacity growth such that it will be slightly down year-on-year for the 2019 winter season versus our original growth plan of more than 6% for the period,” Cathay Chief Customer and Commercial Officer Ronald Lam said in a statement.

“Given the current significant decline in forward bookings for the remainder of the year, we will make some short-term tactical measures such as capacity realignments.”

In recent months the Cathay Group has found itself under increasing pressure both financially and politically. As we reported at the end of last month, it was recently accused of fawning to China’s Civil Aviation Authority.

China has allegedly demanded that the airline takes action against any of its staff sympathetic to the demonstrations or joining marches. The Group includes regional airlines Cathay Dragon and HK Express.

Amid all of this Cathay is trying to exorcise financial demons. In 2017 it recorded losses of around $357 million. The figure was put down to misguided fuel hedging, compensatory fines and redundancy costs.

In his September press release, Cathay’s Ronald Lam was optimistic about the eventual turnaround of the market.

In spite of Lam’s sanguine attitude however, the outlook remains bleak in the medium term. The combination of Hong Kong troubles, a surge in transit passengers and the effect of a rising U.S. dollar may cause Cathay to check its seat restraints several times over. 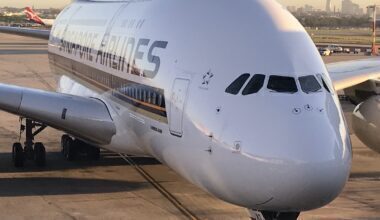