Are Any DC-10s Still In Service?

Designed and built in Long Beach, California, the McDonnell Douglas DC-10 went into production in January 1968 and was first put into service in 1971. The aircraft, capable of carrying 250 to 380 passengers, is said to have paved the way for mass long-haul air travel. But are there any still in service these days? Let’s find out.

Unfortunately, our research leads us to believe that the last commercial passenger flight for the DC-10 took place in February 2014. CNN reports that Biman Bangladesh Airlines took the honor of operating the final service, carrying passengers from Bangladesh’s capital of Dhaka to Birmingham, England.

In a statement published by CNN, the airline called the final flight “a fitting end for an aircraft that has served Biman loyally and well over many years,”

But while the DC-10 is done with commercial passenger service, it does still occupy the skies in 2020 in other roles and capacities.

With fuel efficiency and maintenance costs being less of a priority for cargo airlines, the DC-10 remains in service as a freighter for global shipping and delivery company Federal Express (FedEx).

According to Airfleets.net, there are 25 of the type still in active service. While some were purpose-built freighters, a number of these jets were converted from passenger aircraft. Converted aircraft are listed as having flown for airlines such as United Airlines, American Airlines, and even closed-airline, British Caledonian.

While several cargo airlines flew the DC-10 for some time, FedEx remains the only remaining commercial-cargo operator of the type. In total, an impressive 104 DC-10s have flown with FedEx. The majority have since been retired and scrapped.

The United States Air Force appears to be the single largest operator of the DC-10. These aircraft are technically designated KC-10s and are used as tankers, carrying fuel for Air Force operations.

According to Boeing, the US Air Force placed a $216 million contract to upgrade the service’s 59-jet KC-10 tanker fleet with a new communication, navigation, surveillance and air traffic management (CNS/ATM) system. All 59 aircraft are still listed as active, with the oldest models being produced in 1981 and the newest rolling out of the factory 1988.

As these particular aircraft were purpose-built for the Air Force, none of the 59 were ever converted from passenger variants or flew with any other airlines.

Four DC-10s are unique from all other DC-10s as they are used to fight forest fires as aerial firefighters. The jets are owned and operated by a company called 10 Tanker and have been used to fight fires across the United States and Canada, as well as in Chile and Australia.

We’ve seen 747s and 737s converted into these types of aircraft, so converting DC-10s make sense as well!

Then, there is a single DC-10 still flying today that has a special purpose unlike any other aircraft. The jet, registered as N330AU, operates as a ‘Flying Eye Hospital for a non-profit organization by the name of Orbis.

“As the world’s only Flying Eye Hospital, it’s unlike any plane you’ve ever seen before. A state-of-the-art teaching facility complete with operating room, classroom, and recovery room – this amazing aircraft has been an example of the alliance between medicine and aviation since 1982.”

The DC-10 was the first commercial wide-body airplane from McDonnell Douglas. Interestingly, the type was designed at the request of American Airlines, of which 66 flew with the carrier.

All in all, 446 DC-10s were built, with the last one completed in 1988. The iconic tri-jet is credited as one of the aircraft types that have shaped modern air travel.

Have you ever flown on a DC-10? Share your experience with us in the comments! 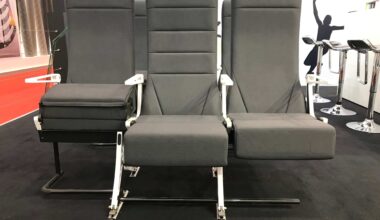