Sunday afternoon took a surprising turn for several residents of Milton, Massachusetts when a huge evacuation slide fell from the sky into a back garden. The giant inflatable slide fell from Delta Air Lines Flight 405, a Boeing 767, on its way from Paris, France and preparing to land at Boston’s Logan International Airport. No one has been reported as injured by the incident and the plane landed safely.

A relaxed Sunday afternoon chat with a neighbour took a rather frightening turn for Stephanie Leguia from Milton, Massachusetts when a giant evacuation slide came crashing through a tree. It broke four branches before smashing into the ground just feet from where the neighbours were stood chatting.

@MenTourPilot evacuation slide falls off of a plane outside of Boston, not far from where I live! Yikes! Ever heard of such a thing? https://t.co/Pwa95MhdaP

Ms Leguia, a resident of Adams Street, said in an interview with The Boston Herald that, “if it had hit us, we would have been dead — it’s that heavy.”  Initially, the neighbours thought the slide was a “giant silver tarp”. However, on further inspection, they found a Boeing label and decided to call the police. They identified the object as an uninflated emergency evacuation slide. Delta maintenance crews later came to retrieve the slide.

It turns out the 6-foot silver slide came from a Delta Air Lines flight as it headed towards Boston’s Logan International Airport. The pilot of the Boeing 767 reported a loud noise on the aircraft but had no trouble landing safely at 12.01 pm local time. The source of the noise, the falling slide, was only discovered once the plane had landed. Exactly how and why it fell is still being investigated.

The FAA is investigating the why the slide fell but has so far only provided a statement clarifying the nature of the incident; “The pilot of Delta Air Lines Flight 405, a Boeing 767, reported a loud noise as the aircraft was on approach to Boston’s Logan International Airport shortly before noon today. Workers inspected the aircraft after landing and discovered that the right rear evacuation slide was missing.”

In a separate statement after the incident, a Delta spokeswoman said: “Delta is investigating an inflatable over-wing slide that was retrieved following an aircraft’s landing into Boston’s Logan Airport.”

Despite giving those it nearly hit a shock, it isn’t entirely surprising that the slide fell over Milton. Milton has more than 70,000 planes passing overhead going to and from Logan International Airport. Just last week a committee of residents submitted a noise complaint as the aircraft fly so low, they leave ash and soot in their wake and wake residents during the night.

A similar case occurred in 2010 when another neighbourhood in Milton received a tragic shock as the body of a 16-year-old stowaway fell from an aircraft also heading to Logan Airport. Although the FAA does not keep official records of parts which fall from planes, there is an acronym for it: PDA, Parts Departing Aircraft. This would suggest that incidences like this one are not as uncommon as you might first think.

Currently, there are no deaths linked to objects falling from aircraft onto people below. However, last year, the International Civil Aviation Organization published a paper in which it states that incidences like the one in Milton are occurring more frequently and that current attempts to solve the issue are “not sufficient”.

A lucky escape for the residents of Milton on this occasion but perhaps something we might be hearing about more often in the future. Do you think that objects falling from planes is presenting a larger problem going forward? What do you think can be done to minimise these incidents in the future? Let us know in the comments below. 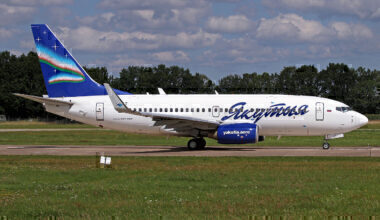