Amsterdam To Minneapolis – Delta One A330 Review

The transatlantic market is rife with competition. With plenty of airlines comes plenty of business class products. Delta offers a few different products on their aircraft ranging from Delta One Suites to herringbones to forward facing. However, Delta’s reverse herringbone on the A330 is arguably one of the better way to cross the Atlantic.

Delta One can be very pricey. Since this leg was a continuation of my journey from Cape Town, I paid a total one-way cost of $3,400. If you’re flying direct between Amsterdam and Minneapolis, you’ll likely spend well over $6,000 on a one-way flight.

Delta Skymiles, Flying Blue, or Virgin Atlantic’s Flying Club are some of your options if you want to fly one-way on miles. You might also be able to lower the cost of your trip (whether in miles or cash) by tacking on an extra flight or two on either direction.

Since my inbound from Cape Town was delayed, I sprinted through transit security and Schipol Airport to arrive at my gate just before boarding started. Delta One passengers have access to KLM’s Crown Lounge, although it is a bit of a hike from Delta’s departures from Amsterdam.

Do note that you’ll have to undergo a documentation and security check prior to boarding your flight to the U.S. out of Amsterdam. I have seen this process occur at the gate, or else at a centralized location (D1 or E1) prior to boarding.

Delta’s A330-300s feature 34 business class seats in a reverse herringbone configuration. This means that all passengers have direct aisle access. In addition, all 34 seats are located between doors one and two.

I arrived at my seat, 2J, and found a blanket, pillow, headphones, and amenity kit waiting for me. I appreciated how everything was wrapped in plastic. The wrapping helps everything feel clean. After all, we want to arrive at our destination well rested and free from any ailments.

I appreciated the TUMI amenity kit, which contained essentials for a long-haul flight and more.

The headphones were LSTN-branded and were identical to the ones I’ve received on previous flights. Though they were better than KLM and Vietnam Airlines’ headphones, they weren’t the best out there. That being said, I didn’t have a problem with audio quality and they were semi-decent at noise cancellation.

There weren’t any special amenities in the lavatory. In fact, one lavatory had an inoperative sink.

The seat itself was a standard reverse herringbone. Adjacent to the seat was a reading light and panel with power and a headphone jack.

In front of the seat, there was a monitor, remote control, and seat controls.

Though the panel showed its age, I was pleasantly surprised at how quickly everything reacted. The monitor was easy to control when reclined, via the remote control. The seat changed position smoothly.

Overall, the seat lacked storage. Do note that due to the curvature of the aircraft, the overhead bin above 2J on the A330 is smaller than others. I couldn’t fit my normal carry-on in the bin, only a backpack. Also, aside from the literature pocket, there wasn’t any place to store things. There wasn’t even a shoe cubby!

In bed mode, there was enough room for my 5’8″ frame to stretch out. The seat was very comfortable. I got a solid four hours of sleep on this almost nine-hour flight.

With the armrest raised, I felt like there was enough privacy. This is one area where Delta’s A330 excels in comparison to other transatlantic products. Some of KLM’s aircraft are in a 2-2-2 configuration. Lufthansa’s 2-2-2 angle towards each other. British Airways offers an interesting layout in Club World. Some of United’s Dreamliners and 767s lack Polaris seats. A fair number of Delta’s transatlantic flights operate on A330s, so chances are, you’ll have a pretty decent hard product.

Delta Studio had more than enough films and TV shows to keep me content. In my opinion, Delta Studio is one of the best inflight entertainment systems in the sky. They consistently offer a fair variety of new releases as well as a few old ones. I ended up watching Gone with the Wind on this flight.

Wifi was available on the flight. I used Delta’s free inflight messaging on certain apps to stay connected, and to update friends and family on my arrival status. Again, in comparison to every other transatlantic carrier, this is a huge bonus.

Soon after settling in, I was offered a pre-departure beverage of choice. The options were Heineken, sparkling wine or orange juice. I opted for the orange juice. I was also presented with a bottle of water at boarding.

The menu and drink list for the flight was as follows: 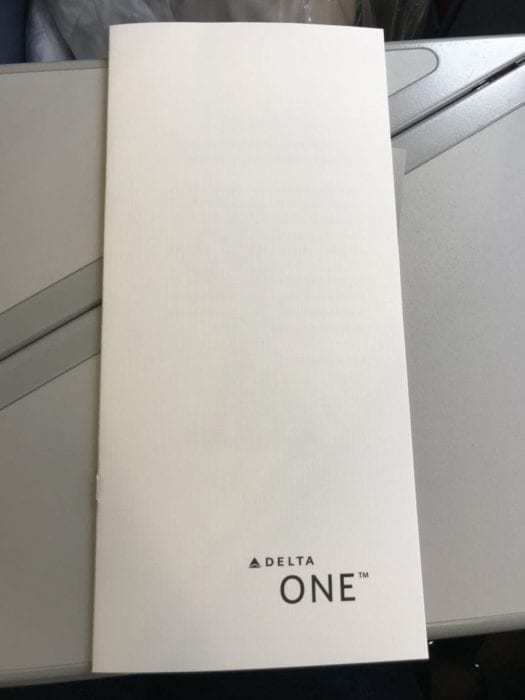 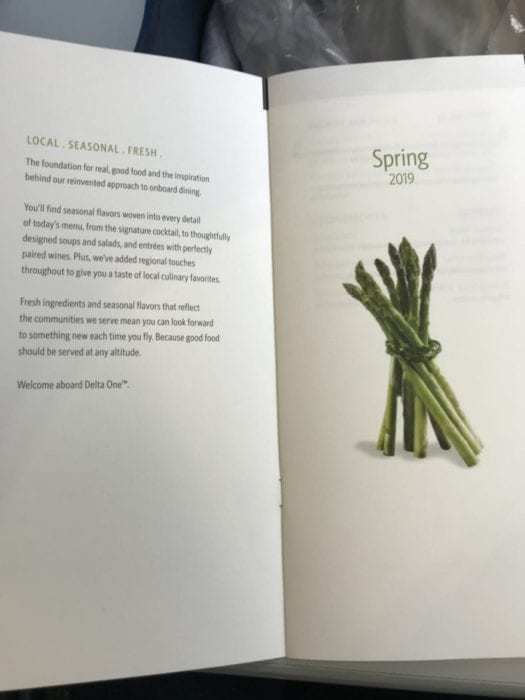 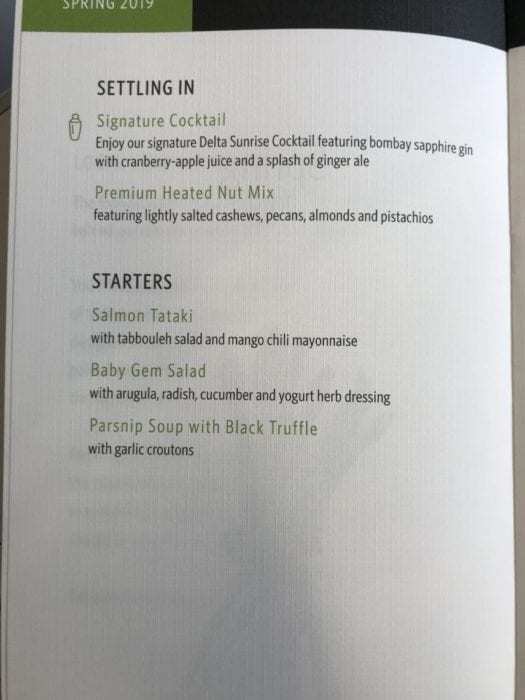 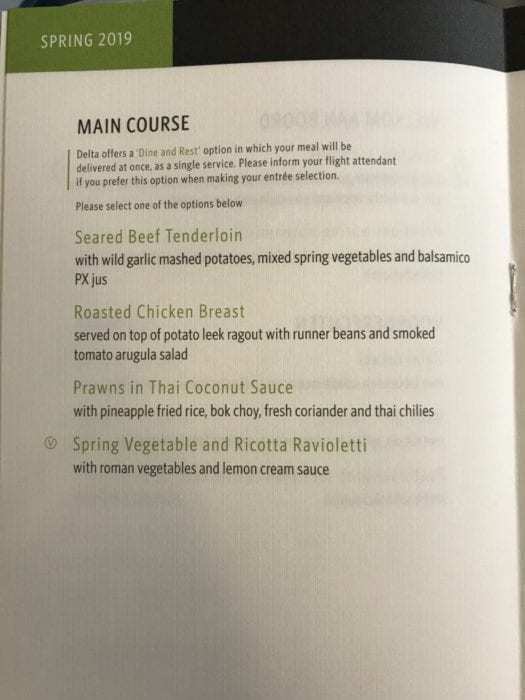 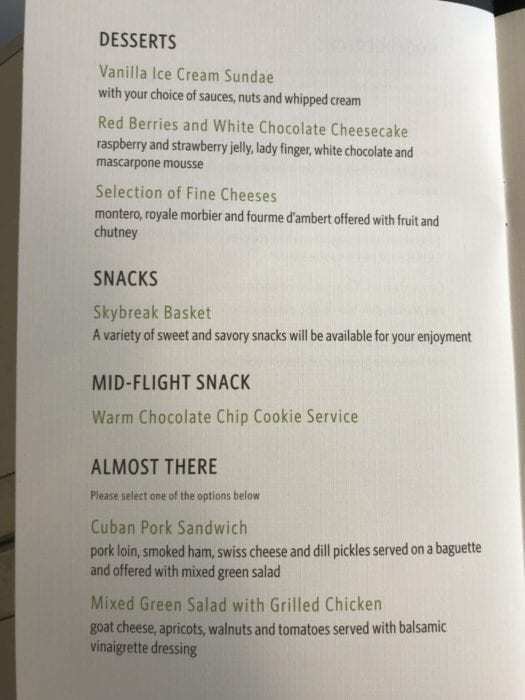 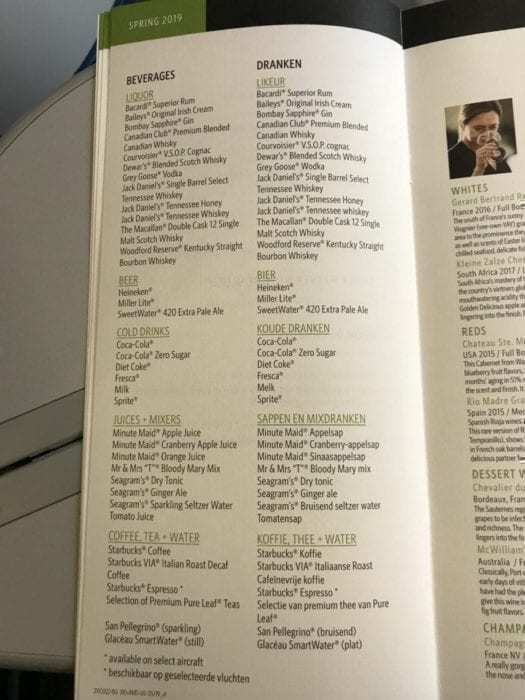 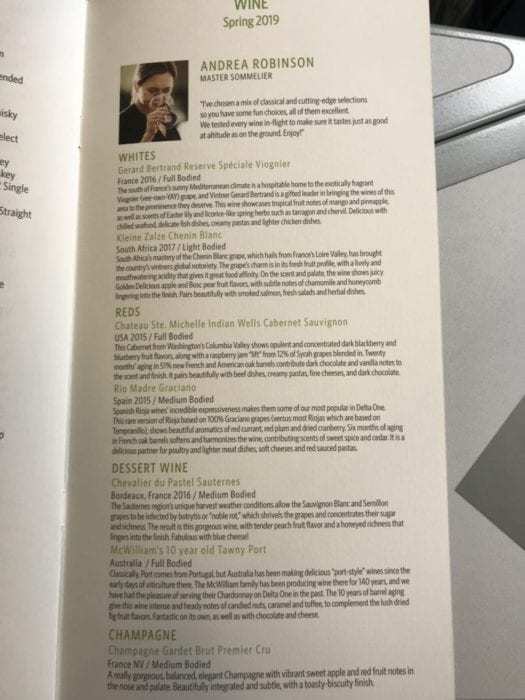 About 50 minutes after takeoff, flight attendants came around for drink orders. I went with a Coke.

About 20 minutes after, a friendly flight attendant offered me the appetizer.

The salmon and soup were fantastic. I normally don’t expect good food from outstations, however I’d expect with Amsterdam being a major gateway for Delta flights that they’d have a good catering program. Compared to other onboard fish meals I’ve had, the salmon was absolutely delectable. The soup was dished out from a cart and was warm. Surprisingly, the salmon and soup had different flavors that worked well together. In addition, the salad was crisp and fresh.

About 20 minutes after the appetizer was served, flight attendants came around with the main course. I received an email to pre-select my meal prior to departure. I chose the beef tenderloin.

The beef was slightly overcooked, but not so much to detract from the entire meal. The sauce and potatoes paired well. This was by far a fantastic meal for international business class.

After clearing the main course, flight attendants came around with a dessert cart. I went with an ice cream sundae.

The entire meal service concluded about two hours after departure. I found the pace to be fine for a daytime transatlantic flight. I also appreciated how, in case you didn’t want the full service, you could request an express lunch instead.

Two hours from arrival, flight attendants served the “almost there”. I selected the chicken salad.

Despite being a relatively simple salad, Delta went all out with flavor. The seasoning on the chicken paired well with the apricots. The fruit was nice and fresh. I also appreciated the garlic toast that came with it. Though the portion wasn’t particularly large, it was filling for a pre-arrival ‘snack’.

I also received a little chocolate at the end of the meal.

Delta’s meals are some of the best in the sky, and this was no exception. In fact, for a flight originating from a non-hub, I was pleasantly surprised at the quality of both meals. The flight attendants took great care into making sure each meal was plated well. Delta’s main galley for business class on the A330s is at the second set of doors therefore service is conducted from back to front.

What really sets Delta apart are their cabin crew. I have consistently received excellent service on every mainline Delta flight and this was no exception. The Minneapolis-based crew were engaging and they made conversation with every passenger. When I mentioned that I used to live in Minnesota, they went out of their way to welcome me home upon arrival.

The cabin crew working Delta One were attentive during meal services. They responded to the call button within seconds and always addressed me with a smile and “Hello Mr. Singh.” Every interaction with them was beyond fantastic.

Delta One on the A330 is one of the best ways to cross the Atlantic. With a solid hard product, fantastic onboard catering, and some of the best crew in the skies, you’re likely to have a wonderful experience onboard.

Delta also excels at the small stuff. When I boarded, this note was waiting for me:

The one area where Delta could improve is with their LSTN headphones. Nevertheless, every other aspect of the experience made up for the shortcomings of headphones. I wouldn’t hesitate to recommend Delta One to anyone wanting to cross the Atlantic!

Have you flown Delta One? Do you prefer Delta One? Let us know in the comments!