Review: Dublin to Frankfurt On Lufthansa’s A340-300

As Simple Flying reported earlier this year, Lufthansa have been offering A340 flights this summer season on selected European destinations.

Up until October 23rd, you can fly on a venerable A340-300 between Dublin and Frankfurt (or vice versa) in place of the regular narrow body service. 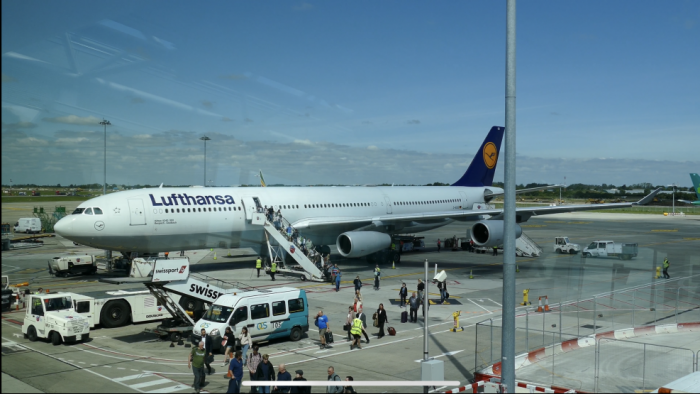 I flew the route to experience this old aircraft in Business Class; I’m reluctant to pay for 2-2-2 business class on long haul, but always wanted to try the seats.

I also made a video for my YouTube channel:

My day started at Dublin, where I was able to see the familiar old terminal from 1949 in all its glory in spectacular summer sun. 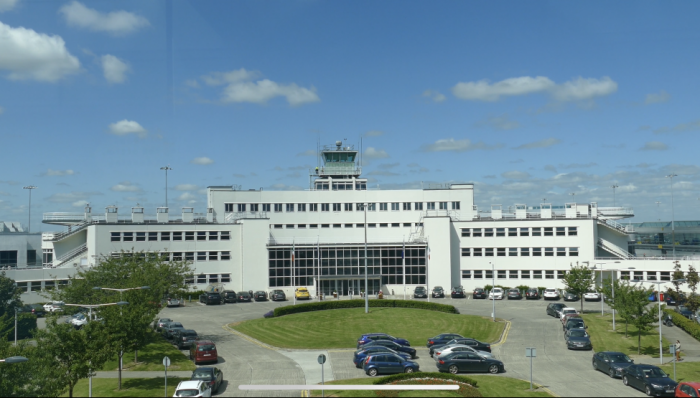 My business class ticket enabled me to access the DAA Executive Lounge, which is a middle-of-the-road airport operated lounge. In the morning, there are pastries and fruit, and as long as it isn’t busy, is a fair place to wait for an hour or so. 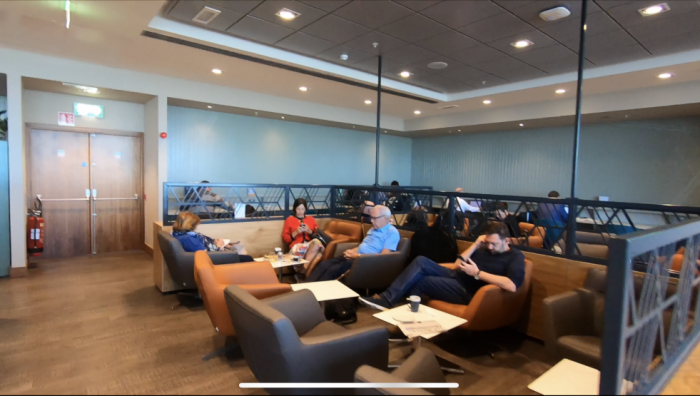 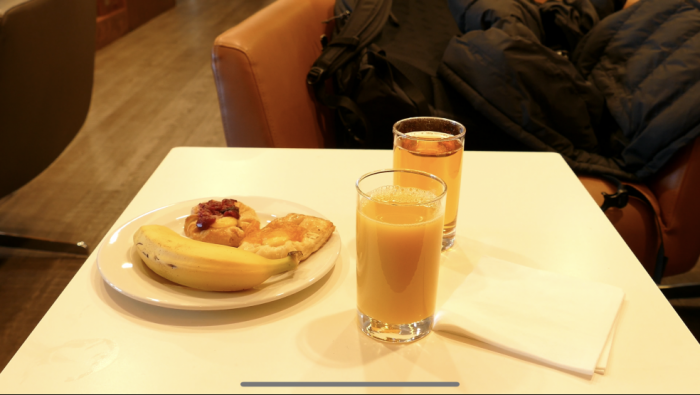 Lufthansa altered the flight timings by about 20 minutes to accommodate this widebody in Dublin; it takes far longer to deboard and reload compared to the narrow bodies they usually send.

In spite of this, the inbound aircraft arrived 30 minutes late and was unable to recover the delay on the ground. 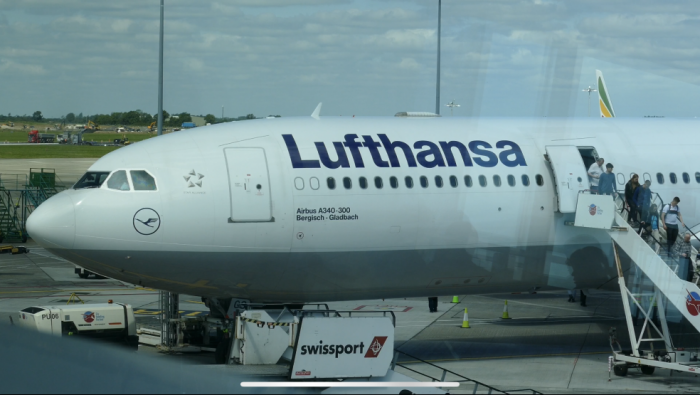 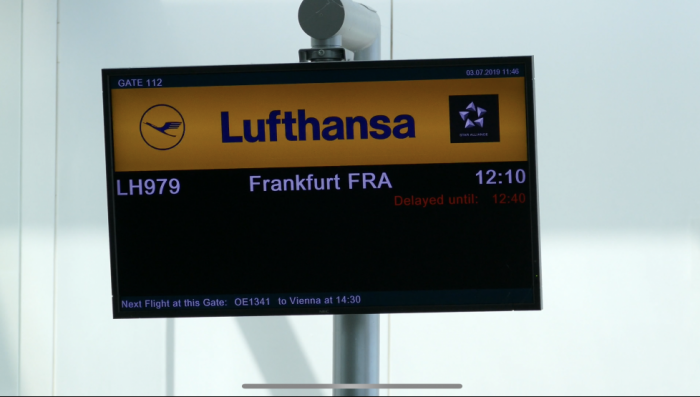 Boarding was directly across the tarmac, which certainly didn’t help the speed of boarding. However, you don’t often get the chance to board an A340 using steps, so I was glad of the photo opportunity! 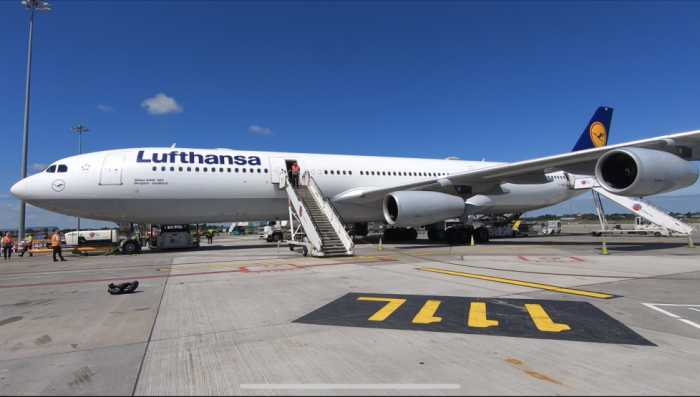 Business class occupies the front cabin of the A340-300; there is no first class on this variant. The arrangement is 2-2-2. Window seats do not get direct aisle access, which renders these seats somewhat less appealing than much of the competition. A staggered and more private arrangement is coming with the 777X. 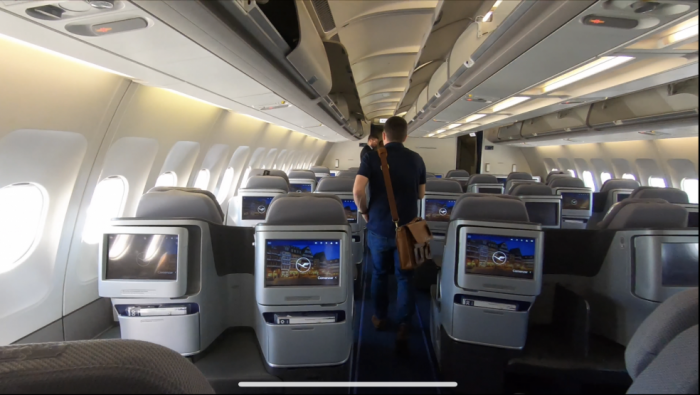 The seats, as they are, feature no privacy and are rather bland, but very comfortable in the sitting position. 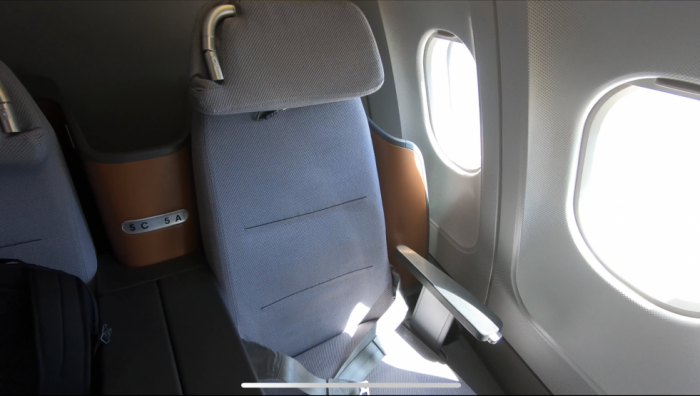 Takeoff was 30 minutes late, so none of the delay had been recovered; this would prove costly to my itinerary later on! 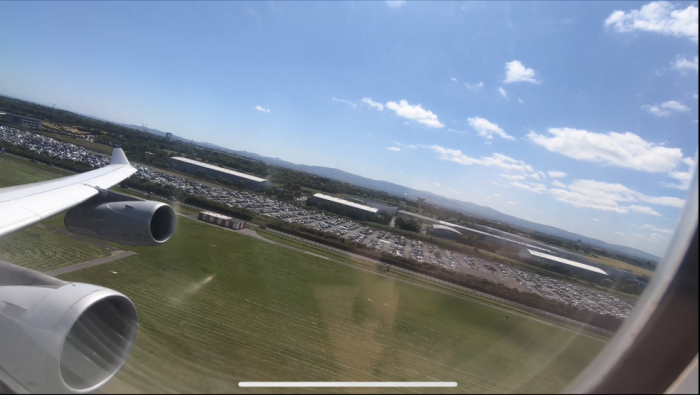 The weather on the climb out and across to Frankfurt was exceptional, with superb visibility.

Some of the seat features aboard the Lufthansa A340-300:

The IFE screen is in standard definition and comes on a bracket which requires a knack to operate easily. It’s heavy and can suffer from glare. On the right of the picture can be seen Lufthansa’s spectacles holder, which is such a neat solution it makes me wonder why more airlines haven’t incorporated this little widget. 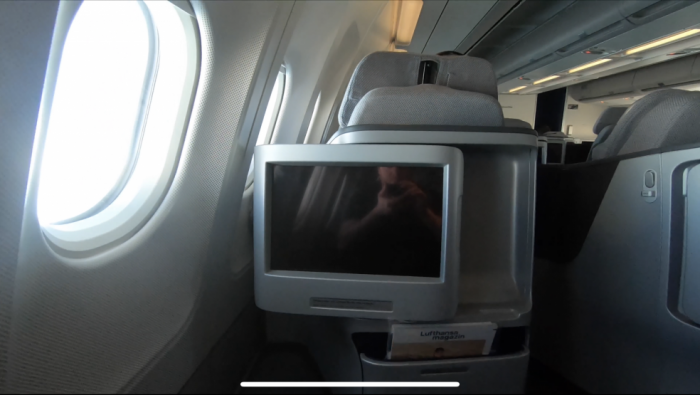 The table folds out from the centre console. It was reassuringly sturdy. However, it can’t be swung away from the occupant of the seat, only slid forward or backward. This means you can’t easily leave the seat when your table has items on it. 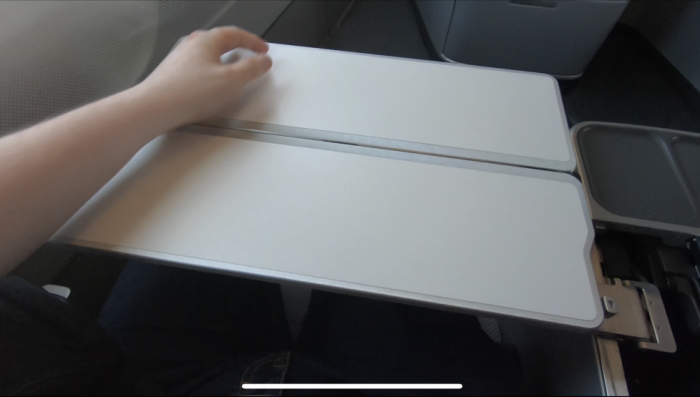 Storage is limited in these seats, with a small pocket underneath the footrest and side cubby the only places to secrete objects. 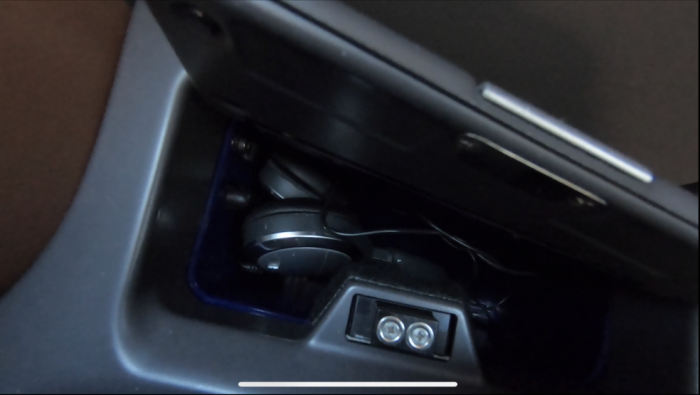 The IFE remote is located in the center console and looks like it comes from a different era altogether. I’m sure this would have looked dated when these seats were first introduced! 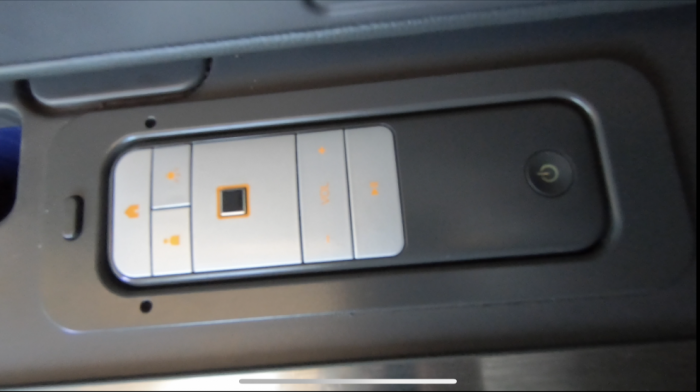 As expected, the seat turns into a bed, and the controls are simple and intuitive. There is also an airbag in the lumbar portion of the seat which gave great support. 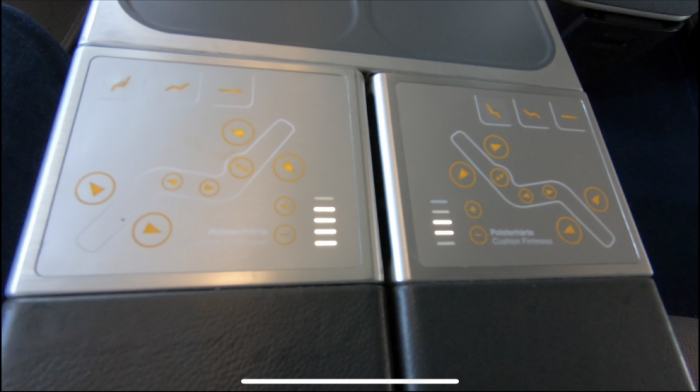 The headrest can be moved up and down, but there are no adjustable wings. Spotlights for reading are located in the headrest. 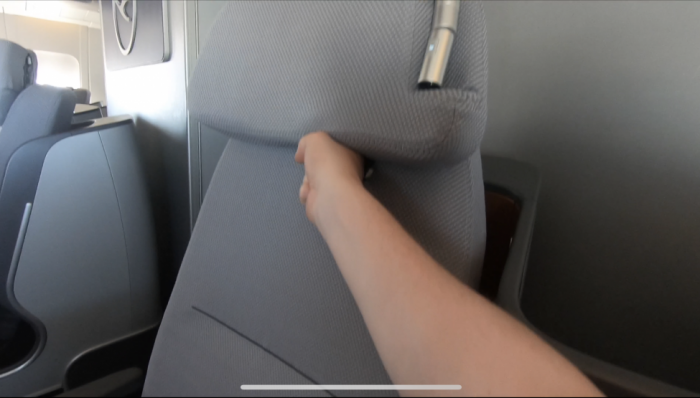 There is no USB charging available, but there is a universal power socket available to each passenger. 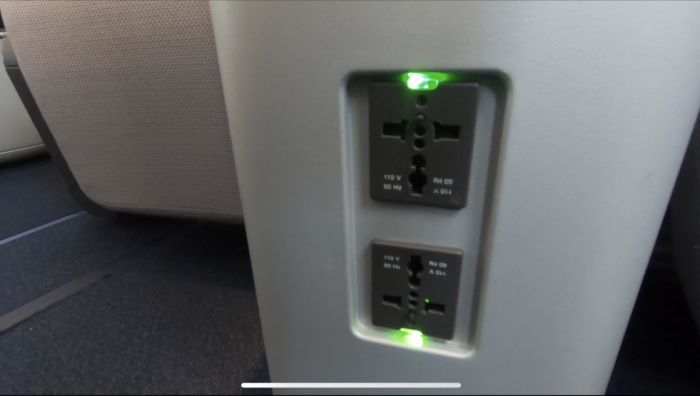 In the spirit of trying to eat healthily, and having flown Lufthansa a lot and gotten bored of its short-haul meals, I pre-ordered a low-calorie special meal using the online booking management tool.

I don’t recommend you do this unless you are super committed to being healthy – this meal was exceptionally bland, consisting of chicken and fish (in the same dish..) with a bland sauce. Other airlines can pull off low-calorie meals nicely and produce interesting dishes – British Airways, I’m looking at you. 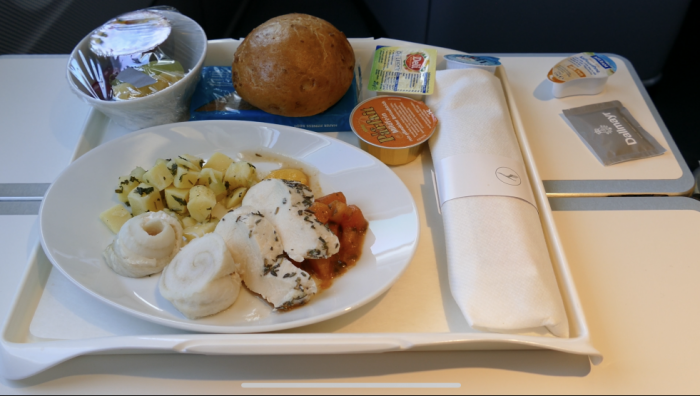 Our progress had been reasonably quick and we were soon descending into the Frankfurt area from the east, passing Mainz-Finthen airfield in the process. 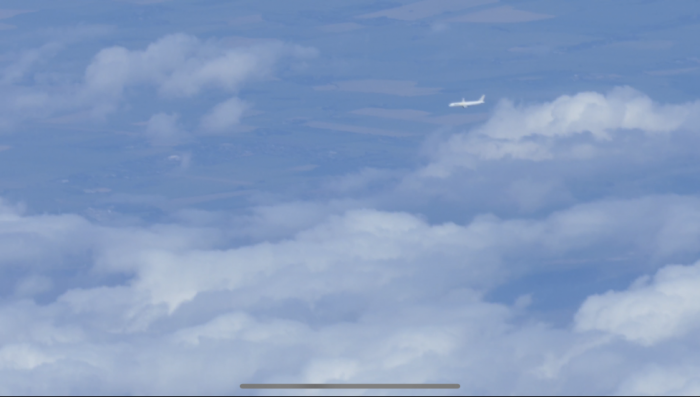 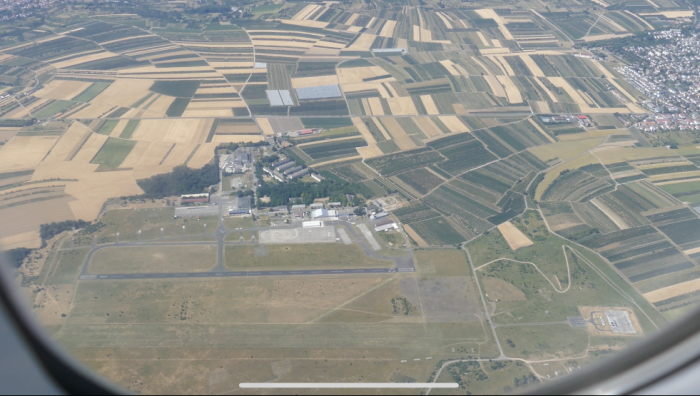 Touchdown was 30 minutes late, and we took a long taxi into the stand. 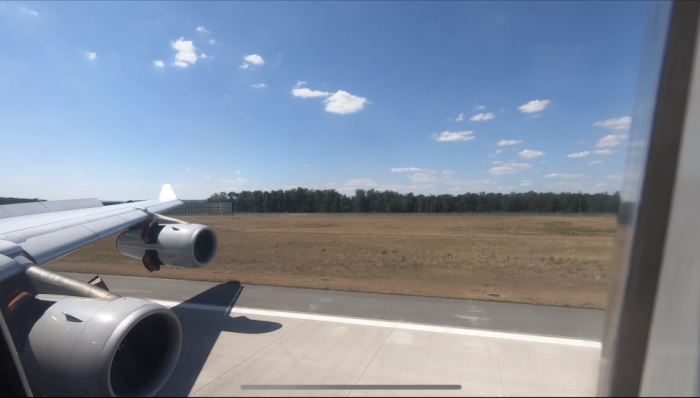 Sadly, the delay and the labyrinthine connections process at Frankfurt meant I missed my connection to Budapest by a few minutes, which rather put a dampener on the day.

Still, any day where you get to fly a vintage A340-300 cheaply on an intra-Euro route is a good day, and avgeeks have until October 23rd to get their fill. The flight operates every Wednesday and can be booked for about 90 Euro one way in economy. Business fares can be made more sensible by booking returns and open jaws using the nesting principle – this works if you are time-rich and can be very flexible with your planning and know what you’ll be doing a long time out. Not all of us have that luxury, I appreciate! 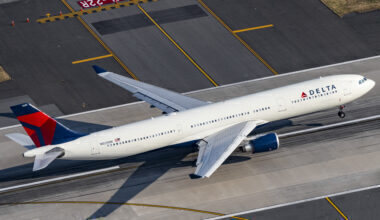 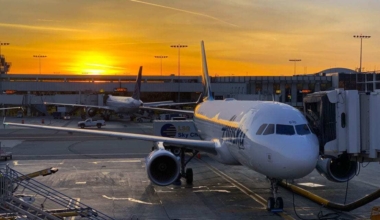 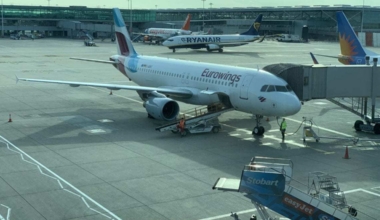 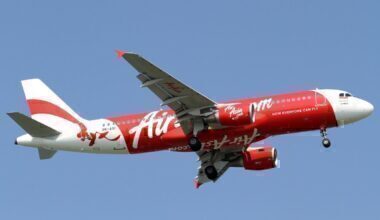