Today, Ecuatoriana Airlines revealed its new identity on a YouTube live video, showcasing to the world the colors and brand of the revived carrier. Additionally, Eduardo Delgado, the carrier’s CEO, gave the world a first glimpse at what Ecuatoriana will look like. Let’s investigate further.

The brand, the logo, the colors

Ecuatoriana Airlines is the newest startup in Ecuador. It is one of many possible carriers launching operations in South America this year. Nevertheless, the brand is not new. Long ago, Ecuatoriana de Aviación filled the skies, ceasing operations in 2006.

The name Ecuatoriana recalls the old glory days of luxury aviation, and that’s what the new management is trying to bring back, with a twist.

Ecuatoriana will be a very accessible airline, not a legacy carrier with high costs, said Eduardo Delgado. The plan is to reconnect the country under a new brand airline of Ecuadorian origins, proud of helping its economy in the post-COVID environment.

The airline will use a tri-color hummingbird as its logo, representing Ecuador’s biodiversity. The main colors are dark blue, yellow, and aqua blue.

Earlier this week, we reported Ecuatoriana Airlines plans to launch operations with a fleet of Boeing 717 and Dash 8-Q400 aircraft. The carrier posted a statement showing its intentions. It is said that these two planes work perfectly with the landscape in Ecuador.

If Ecuatoriana indeed uses the B717 and the Dash 8-Q400, it would become the only operator of both aircraft types in Latin America.

“Our fleet will be composed of the Dash Q400 for 78 passengers in two classes. This is the correct aircraft for routes within small cities. You can’t fly a jet to these places, as it would be too expensive, so we believe the turboprop is the right call. For mature routes, the 717-200 will be the correct plane. Also, in the future, we’ll use that plane to fly to the Galapagos Islands.”

The management didn’t provide information on when it will receive its new airplanes. Nevertheless, Ecuatoriana expects to be flying soon, so most likely, we’ll hear more about this in the next few months.

When will we see Ecuatoriana flying?

Ecuatoriana de Aviación is currently looking to obtain its Air Operator Certificate (AOC). That’s a process that is far from finished, said Delgado. But, he also provided a possible date when we could see Ecuatoriana’s launch.

“We’re looking for the AOC. We believe we could get it between September and October. Our flights would start in October, connecting Quito with Guayaquil, Cuenca, Loja, and Manta. But we will also go further, operating point-to-point routes like Guayaquil-Loja or Cuenca-Manta”.

One thing is set by now. The first two flights Ecuatoriana will have will be between Quito and Guayaquil. Both will depart at the same hour, and the crew will be all female.

Currently, Ecuador has two airlines, LATAM and Avianca. None are from Ecuadorian origins. It’s similar to the situation that’s now happening in Peru, where there are two airlines of Chilean origins (Sky and LATAM) and one of Colombian origins (Viva Air) dominating the market.

Ecuatoriana intends to put an end to this situation.

What do you think of Ecuatoriana’s plans? Let us know in the comments. 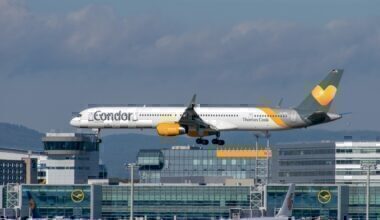