Trip Review: Flying The Airbus A380 With Emirates In Economy Class

Following a successful time at the Dubai Airshow, it was unfortunately time to fly back to Europe. In order to travel back from the Middle East, I flew in the economy cabin of the Airbus A380. Let’s take a look at how it went.

Getting to the airport

Getting to Dubai Airport isn’t too much of a task. The airport is located on the city’s main metro line. I decided to use the metro to get to the airport, however, as my flight didn’t depart until 3 in the morning, I stopped off at the Mall of the Emirates and the Dubai Mall on the way to kill time.

Upon arrival at the airport’s metro station, a long escalator which turns into a travelator takes you into the airport on the departures level.

Checking in for the flight was relatively painless. Online check-in is open up to 48 hours before your flight. I checked in online with relative ease and chose a seat. Once at Dubai airport I just had to drop off my bag.

Terminal 3 in Dubai is primarily used for Emirates, and as such, there were many Emirates check-in desks. I was having trouble finding the relevant desk. However, due to the confused look on my face, I was permitted to use an area reserved for frequent fliers as “it’s not busy”.

Having checked my large suitcase in, I proceeded to make my way through the airport towards my gate, A10. First, it was necessary to clear a border checkpoint where I received a stamp signifying I had left the UAE. Next, it was time to clear security, which was quickly accomplished.

Having cleared emigration and security, I was required to take a train to get to the A gates. While this took a little while to arrive, it was fairly quick traveling to the satellite terminal. I popped into the Emirates duty-free store where the airline was selling Boeing 787-10 models, despite switching its order for the 787-9 the previous day,

Despite the huge number of people boarding the A380, the boarding process was actually fairly seamless. My boarding pass and passport were checked, and I took an escalator down into a holding area. We were boarded in groups depending on which part of the aircraft we were sitting in.

The seat flying to London was actually fairly enjoyable. I had ample legroom, which, at 6ft 3, is always a huge bonus when traveling. As the seat next to me was unoccupied, I was able to place my bag under that seat, further increasing my foot space. The only unfortunate thing I came across with the seat was the table. The arm was slightly rusty, meaning it was a pain to pull out.

Emirates’ ICE inflight entertainment has won multiple awards, and it’s not hard to see why! There is literally something for everybody including movies, television, and music. On this flight, I noticed the absence of live TV as the cabin is yet to be refurbished. However, I opted instead to watch some true crime documentaries.

The meal service is the only thing which I believe let down Emirates. Shortly after takeoff, the first meal service took place. This saw passengers presented with two half cheese sandwiches, in addition to a small cup of water and a soft drink of their choice. Following the collection of the trays, the cabin lighting was dimmed as the flight was taking place overnight.

Around two and a half hours prior to landing at London Heathrow, I awoke to find that the cabin lights had been switched back on. After the crew spent at least half an hour giving out special meals, the general meal service began. There were two options for breakfast. I opted for the cheese omelet. Strangely, this was served with a small chicken sausage, potato rosti, and a mushroom tomato side.

The omelet was pretty flavorless, with the chicken sausage not being the best. The rosti was nice, however, the strange mushroom tomato mix seemed to have too much flavor for my liking. Meanwhile, the croissant was very dry and chewy.

The arrival into Heathrow was the worst part of the journey to London. Due to the number of passengers, tied with only 15 e-gates, the queue for immigration wound back down the approaching corridors. It took 50-60 minutes to clear immigration, and as a result, my belt number was no longer being shown in baggage reclaim. However, it must be stressed that this was not the airport’s fault.

Overall, the flight was enjoyable, and one that I would take again. Despite a couple of things here and there, such as catering, not being up to par, the staff were incredibly friendly and attentive! While I want to fly on British Airways’ Airbus A350 next time I head to Dubai, I wouldn’t rule out Emirates.

Have you flown in emirates between London and Dubai? What were your thoughts? Let us know in the comments! 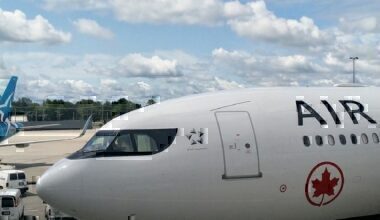 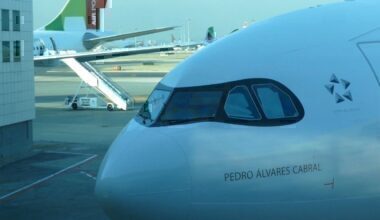 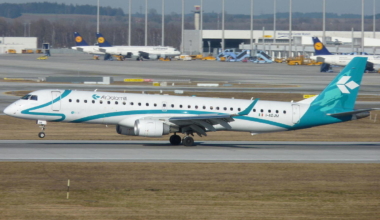 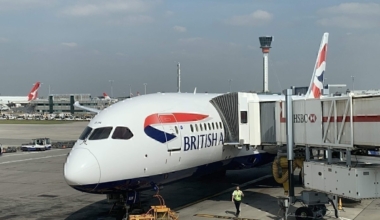