Etihad is one of several carriers that fly out of Nairobi. Since I had never flown with them, I decided to give them a try on my return trip covering several thousand miles. Surprisingly, this itinerary was the cheapest one-way business class itinerary available. Overall, the flight was pleasant and the catering was fantastic.

I booked this flight through Alitalia. Out of Nairobi, on plenty of dates in late July, Alitalia offered one-way business class tickets to Los Angeles for around $1,000. Aside from being the cheapest one-way fare, this itinerary would also help me renew my Gold Medallion status with Delta. Here was the final routing:

I’ve traveled to many developing countries, including Fiji, South Africa, India, Samoa, and Vietnam. However, this was one of the most interesting experiences I’ve ever had at an airport. The airport seemed to be straight out of the 1960s, with old, concrete buildings, Soviet-style light fixtures, and no air conditioning; this was a mindboggling experience.

Fortunately, there was no line at the business class check-in for Etihad. Within 45 minutes, I had cleared security, dropped my bags, passed through immigration, and was on my way to the lounge. The lounge turned out to be another interesting experience. When I arrived, this was how I was greeted:

Etihad Airways uses the Simba Lounge, which is Kenya Airways’ main lounge in Nairobi. However, there were no staff at the counter when I arrived. Instead, a member of the custodial greeted me, took my boarding pass, and welcomed me into the lounge. The lounge had a small seating area. For food, there were a few different hot options and several refrigerators for drinks.

Near the other seating areas was a very interesting aircraft model…

Just before boarding started, a member of the Kenya Airways staff brought my boarding pass and then I was off to the gate. I had to clear security at the gate again and waited about 20 minutes before boarding began.

I should note again that, in 80F weather, the airport had no air conditioning, including the lounge and gate area. This is an airport that you do not want to spend more time than you have to.

I rushed onboard, mostly because I desperately needed air conditioning. The cabin crew was not ready for us, so we had to wait for a few minutes in the jetway before being allowed onboard. My first thought of the cabin was that it wasn’t terribly grand, but rather, seemed more homely and comfortable.

The seats in the center alternate between “couple seats”, or “honeymoon seats”, that are incredibly close together. Otherwise, the seats are flush against the aisles but separated by tables. If you’re traveling alone and can’t grab a single seat on either side of the plane, the two seats closer to the aisle are probably your best bet.

The cabin is intimate with only 22 seats. On this flight, only about seven were taken.

The first thing I noticed about the seat was how comfortable it was. The cushion seemed plush and the pillow helped make the seat more relaxing. After a few moments in cool air bliss, I went about examining the rest of the seat. There was a large footrest underneath the screen directly in front of me. Thankfully, this footrest was large enough that my feet wouldn’t be constricted when trying to sleep.

To the left of the footrest, there was the tray table and power outlets.

To the left, there was a table with two lights. One spotlight and one “wall light”. To have both felt a bit unnecessary, however, I appreciate how it kept with the overall design.

Below that, on the armrest, there were the seat controls and inflight entertainment controller.

I found it interesting that the seat had a massage function. However, I didn’t really use it as I didn’t find much need for it.

There was also a strange port that allowed for personal device connections. However, I don’t know many people who have those cords on them during travel.

Overall, the seat was comfortable, but I found the storage factor to be severely lacking. I had to store my small bag in the space between the seat and the window during the flight. Everything else went in the overhead bin.

There were no amenity kits on this flight, although Etihad did offer business class passengers headphones. While they weren’t the best noise-canceling headphones in the world, they did the job for this short flight.

There were plenty of options on Etihad’s E-BOX inflight entertainment system. I ended up spending several minutes finding something to watch. The screen quality was not the best, however, the large size of the monitor did make up for some of the reduced quality.

The moving map feature was not very customizable and instead ran through a few different screens. I found it interesting how our routing had us go over the northern part of Somalia. That’s one airspace I don’t think I’d find myself in anytime soon.

Shortly after settling in, I received a glass of still water and champagne as part of the pre-departure beverage service. This also came with a nice, hot, scented towel.

Flight attendants then passed the wine list and the menu around.

The menu for the flight was as follows: 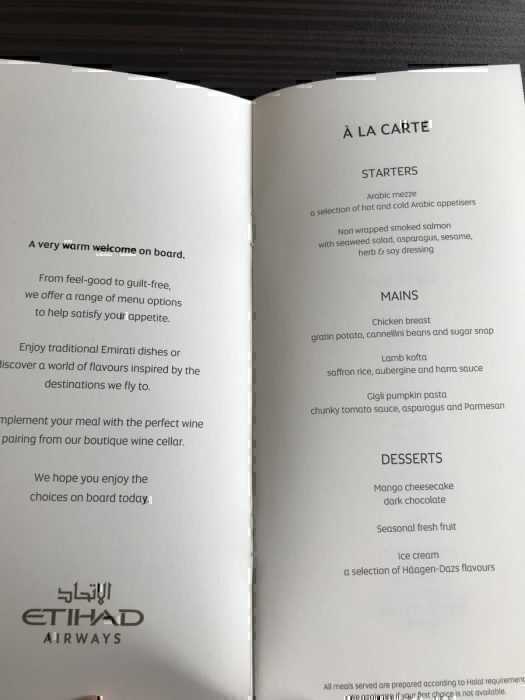 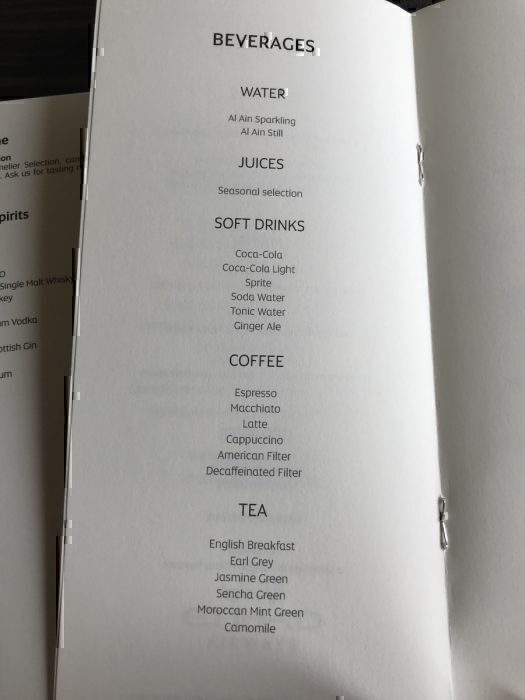 About three minutes after I received the menu, another flight attendant took my order for post-takeoff drinks and lunch. Just after takeoff, I had a glass of Coca Cola which came with a ramekin of lukewarm mixed nuts.

About 40 minutes after takeoff, I received the starter. I selected the Arabic Mezze.

The starter was good! Although, I would have appreciated additional details as to what was what. Then, for my main, I went with the lamb kofta.

The lamb kofta, though a little lacking in presentation, was absolutely delightful. There was plenty of flavor, the meat was not overcooked, and the aubergine paired well. I only wish the portion was slightly larger. However, the meal was still delectable and a good lunch overall.

To finish off the meal, I went with a mango cheesecake. Etihad gets a 10/10 for presentation!

The cheesecake wasn’t terribly special. Nevertheless, I still really enjoyed it. This was the perfect finish to the meal and was the most well-presented aspect of the service.

Etihad had a very solid lunch meal and I was already looking forward to flying with them again! The meal service was finished two hours after takeoff. I took a nap for another hour and a half. Upon waking up, I ordered a camomile tea which came with some biscuits.

Unfortunately, we arrived at a remote stand in Abu Dhabi. Fortunately, business class passengers had their own bus. In the sweltering 102F heat, I definitely appreciated the air conditioning!

If there was one word to describe the crew it would be overwhelmed. The two Croatian flight attendants taking care of me were pleasant and all smiles, but every interaction with them, they expressed a sense of surprise. When I boarded, the crew was not ready for us. Then, when they took my meal orders, they seemed flabbergasted when I asked for a Coca Cola with my lamb kofta. Then, when we hit turbulence, one flight attendant was taken aback by the fact that I was already wearing my seatbelt.

They were still lovely, but they seemed to be overwhelmed. I don’t know if they made a direct turn, which if they did, would explain a lot. Still, I wouldn’t characterize their demeanor as unfriendly or a bad crew. Instead, it seemed they had a lot going on.

Etihad impressed me. I really enjoyed the comfort of the seat and got a solid afternoon nap ahead of a five-hour layover in Abu Dhabi. The catering blew my mind and I was left wanting more. The only downsides to the flight were the poor ground experience in Nairobi and remote stand in Abu Dhabi.

I definitely look forward to flying with Etihad again!

Have you flown with Etihad Airways? What was your experience like? Let us know in the comments!