Etihad Airways is a struggling Middle Eastern airline which has been trying to turn around its business. However, they have not had much success recently, so when an opportunity arose to fly with Etihad, I decided to go for it just to see what the experience is like. After a relatively pleasant flight on the Airbus A330, I looked forward to trying the 777. Unfortunately, the 777 did not impress.

I booked this flight through Alitalia. Out of Nairobi, on plenty of dates in late July, Alitalia offered one-way business class tickets to Los Angeles for around $1,000. Aside from being the cheapest one-way fare, this itinerary would also help me renew my Gold Medallion status with Delta. Although, the Etihad flights do not count for mileage on Delta.

I visited the Etihad business lounge in Abu Dhabi. One of the biggest things the lounge needs to improve is power access, as there were only a few places to charge devices.

With a departure time of 2:15 AM, passengers were ready to get on board. Boarding started a few minutes late and, overall, we pushed back a little late from the gate. Business class passengers boarded first and it seemed to go smoothly.

Upon stepping onboard, I noticed that the cabin had the same layout as the Airbus A330 I flew in on.

Compared to the Airbus A330, however, the 777 was quite outdated. The wall light had a space-age flair to it.

This was not the only outdated part of the seat. The remote control had a very old feel to it. It was clear that this plane had not received an update in several years.

The seat controls were similarly outdated. However, they did the job quite well.

The monitor, footrest, and tray table were similarly positioned as on the Airbus A330. It really does feel like the tray table was more of an afterthought. And then, I realized something else.

The Airbus A330 had a side console to place things or the pre-departure service. The seats on the 777 instead have this shallow tray that is not much good for anything.

There was this strange gap between the seat and the walls. Etihad really should have added some storage consoles.

Unlike my last flight, this flight offered a swanky amenity kit.

The best part about the kit was the case itself. It was stylish and had several pockets that could be useful after the flight. The headphones were exactly the same as on my previous flight from Nairobi.

The E-BOX inflight entertainment system was similarly well-stocked. Unfortunately, the outdated nature of the seat extended to the screen. The quality was subpar.

Compared to the A330, the system on the 777 was arranged in a more outdated fashion.

I received a pre-departure glass of champagne. Due to the lack of a console, the flight attendant had to unlatch the large and somewhat bulky tray table.

Then, came the menu and wine list for the flight. 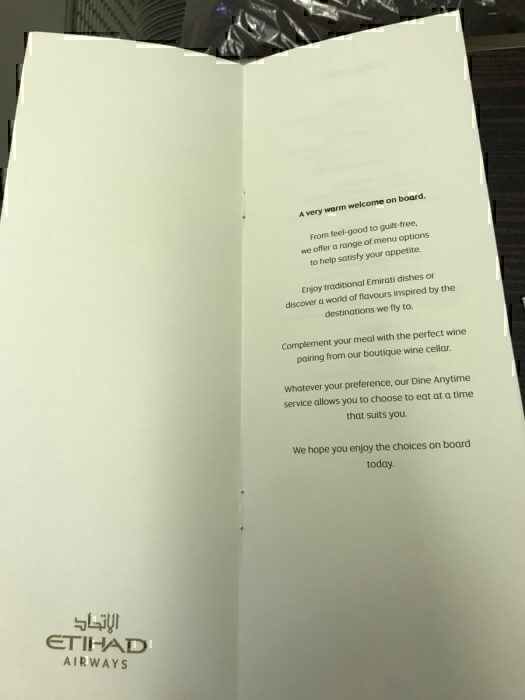 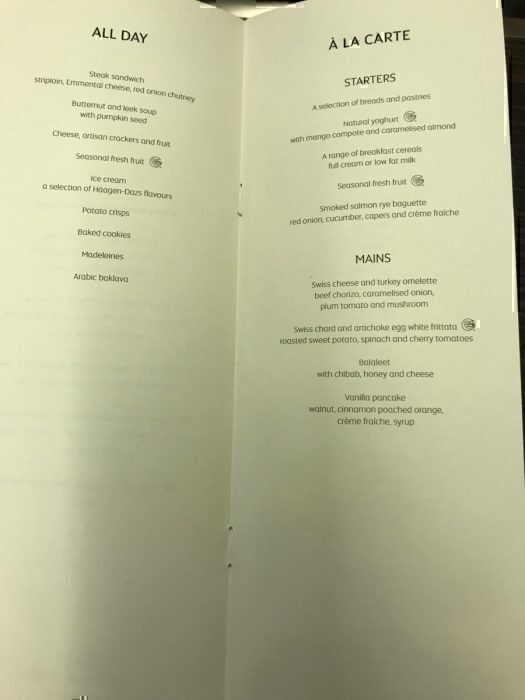 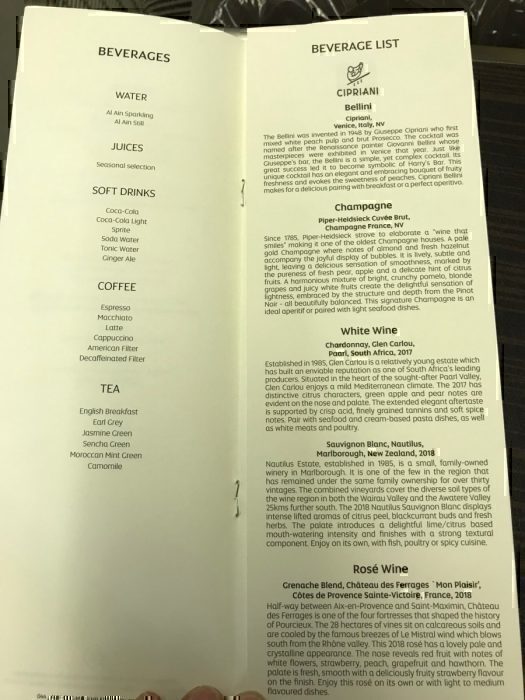 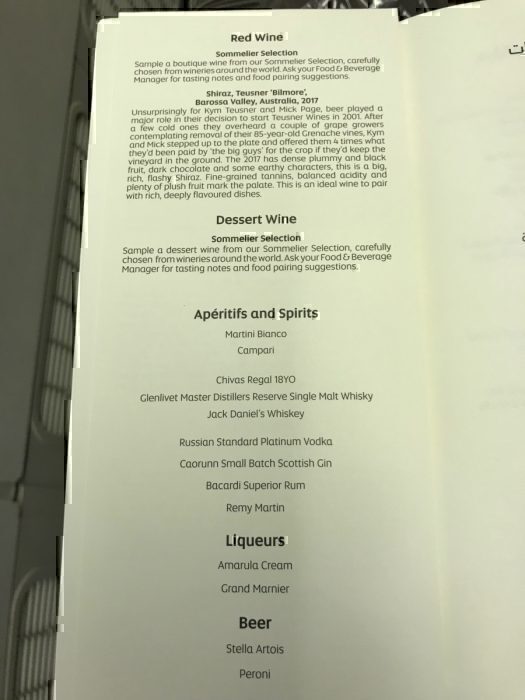 There was no meal just after takeoff. Instead, a light snack was served. I went with a cup of tea and some Arabic baklava.

The baklava was different than any kind of baklava I’ve had before. Even then, the snack was small and fine for this departure time.

After a few hours of sleep, I had the breakfast service.

I had ordered the vanilla pancakes before going to bed. This was delivered just over an hour before landing. I also went with a cappuccino for an early morning wakeup. For an airplane, the cappuccino was nice. The pancakes, meanwhile, were a bit too soggy, and the fruit seemed out of place with this meal.

Compared to the last flight, I was disappointed with the meal. That being said, I usually am not a breakfast person on planes. With breakfast as the main meal on this flight, I probably would opt for a later departure next time.

This crew was very efficient. They helped maximize sleeping time and completed service quickly. Within minutes of settling in, I had an amenity kit, menu, and pre-departure service. Furthermore, the service during meals was quick. My tray table was cleared of the snack as soon as I was done. And, when it was time for breakfast service, the crew did not wake me up until my meal was plated and ready.

For such an early flight, the crew were fantastic and knew exactly how to maximize the use of a lie-flat seat.

The seat was outdated and the meal service was not the best, but overall, the flight was not bad. I definitely would prefer a flight on the A330. For the price, however, the experience was just fine.

Have you flown on an Etihad 777? Let us know in the comments!