December 2019 marked my first – and only – time in Australia. Accustomed as I am to flying business class cheaply where I can find it, Australia is a place that forces me to fly economy through price alone. For this four-hour Perth to Sydney flight in economy with Virgin Australia, I shelled out AU$270; £145 sterling. Not too bad, but business was selling for four times the price, and so, here’s a review of Virgin Australia as seen from the very last row of economy.

This trans-Australia domestic route departs from Terminal 1 at Perth, and Virgin’s domestic check-in is right next to the security control: 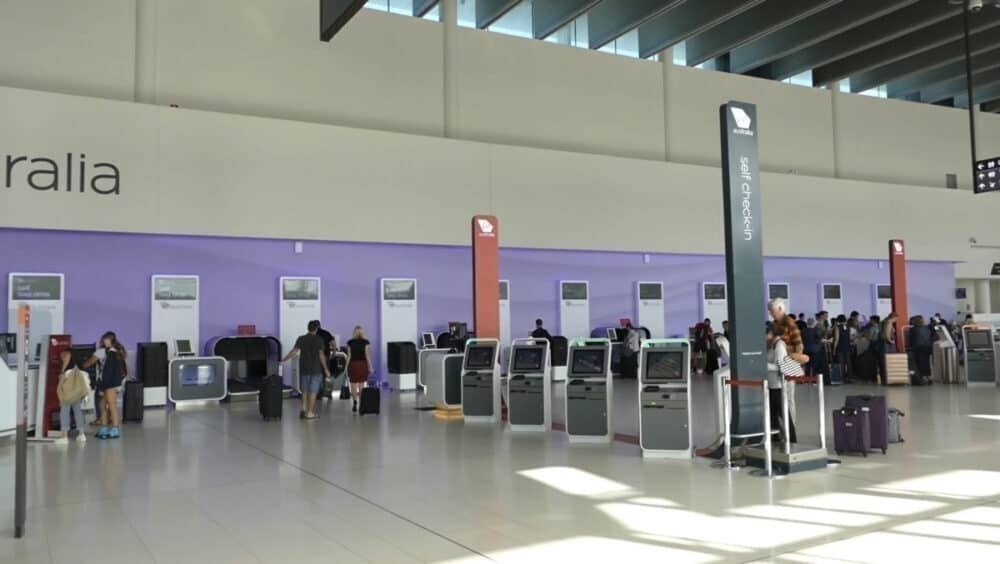 It’s all self-service, and you can send your bag on your way with a quick scan of your boarding card and bagtag barcode. 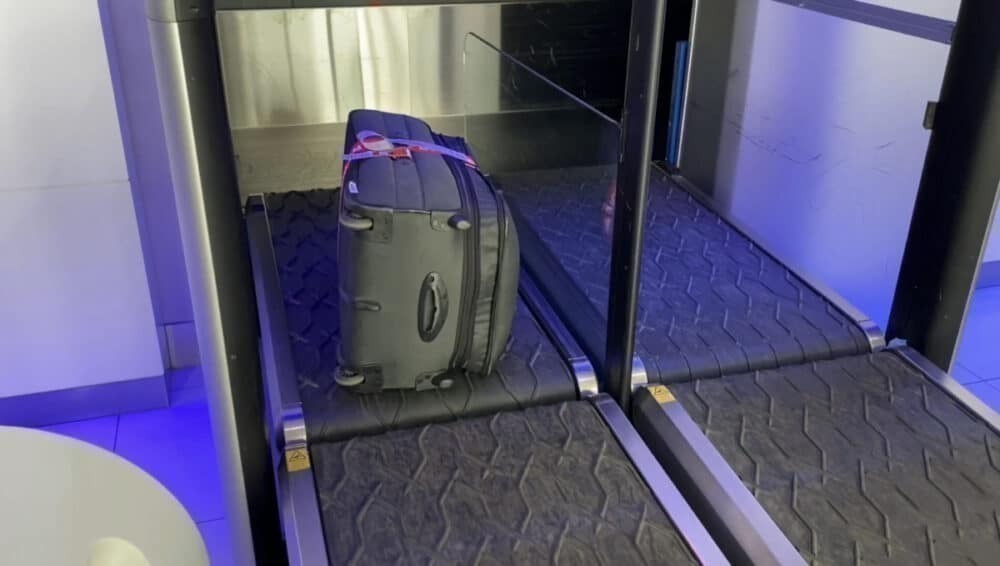 Virgin Australia allows economy passengers the change to purchase lounge access for 55 AUD here in Perth. Since I had two hours to spare, and because I’m always curious about lounges, I parted ways with my cash and checked it out. 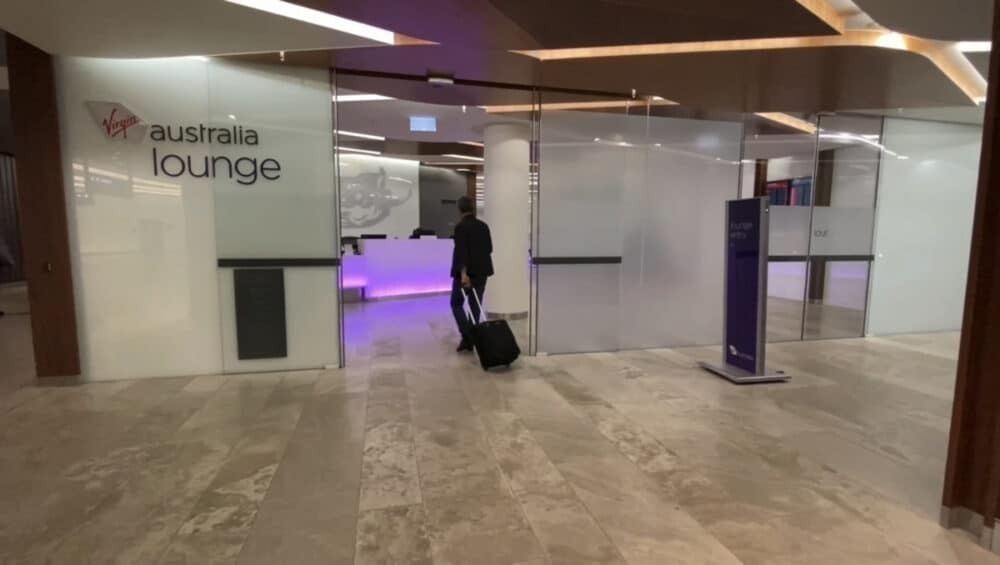 It was breakfast time, and there was a decent range of cold food to choose from, as well as hot sausages and eggs (though Perth in midsummer isn’t my idea of a place to be eating a hot breakfast!). 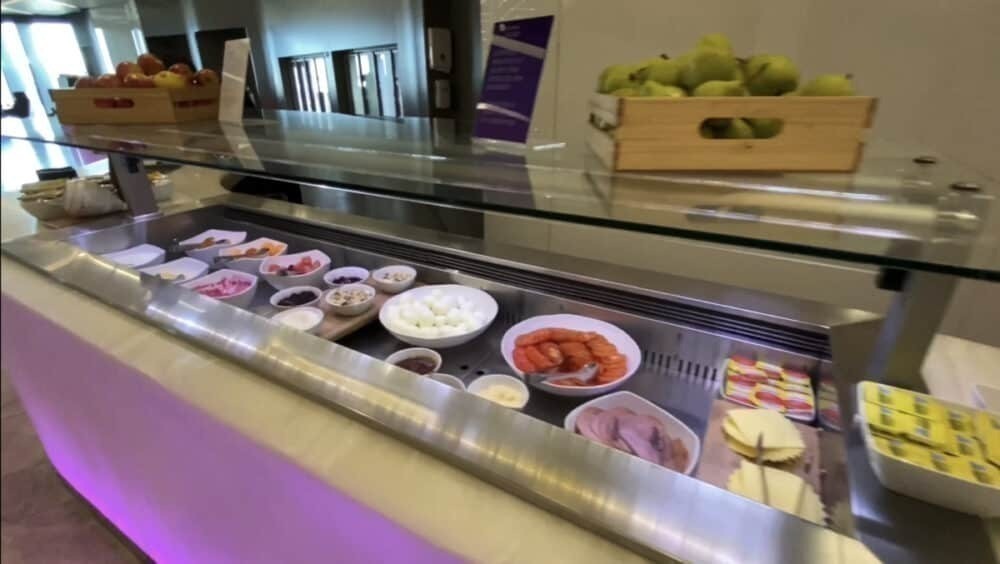 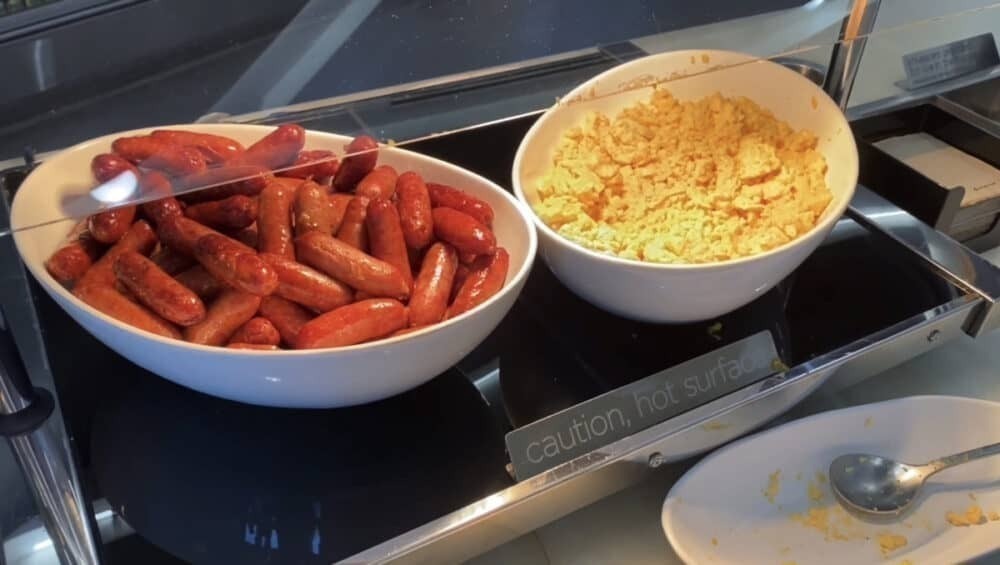 I’m often tempted to stay in lounges during the morning, as this can mean a saving on breakfast at my hotel. Being a flight reviewer by trade, I often find myself arriving early – after all, this is a “workday” for me – and having lots of time to kill. Breakfast, WiFi, charge points, and a generally serene place to chill out are worth the modest outlay of 55 AUD to me. 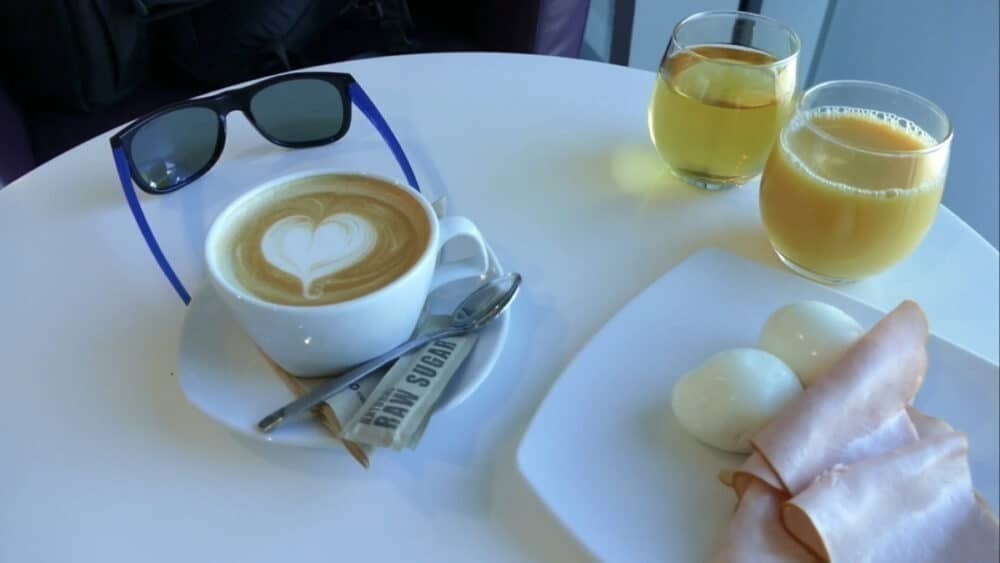 There’s a fine view of the apron from the lounge too, including one of the airline’s Fokker 100 aircraft. Australia is one of the few places where this under-appreciated Dutch jet can still be found flying regularly. 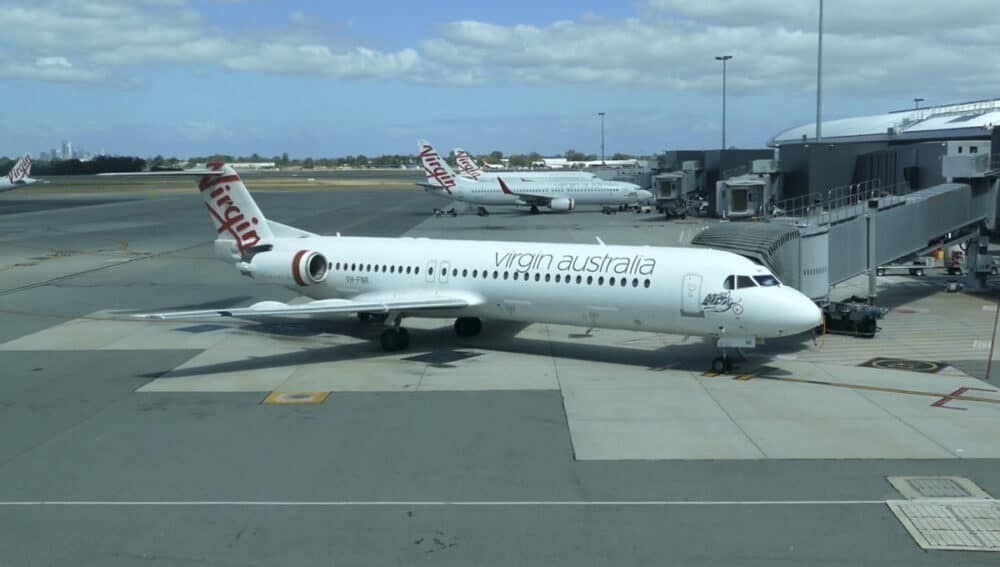 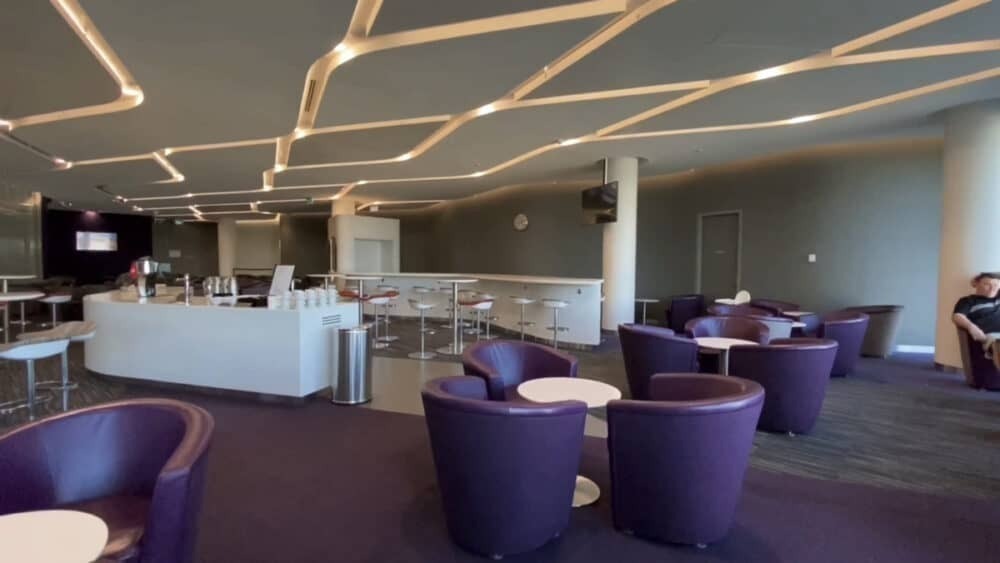 I arrived at the gate about 30 minutes before departure, as boarding was about to start. Perth Airport has much in common with other Australian airports I’ve tried; unbelievably straightforward, pleasant and hassle-free. 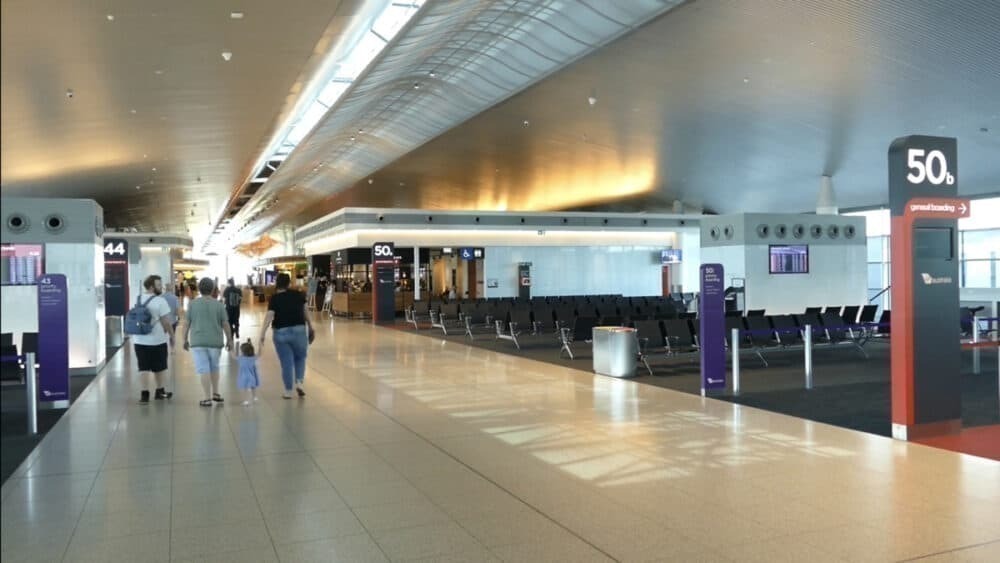 Today’s aircraft was a Boeing 737-800, VH-YFP, named after Nobby’s Beach in Newcastle. 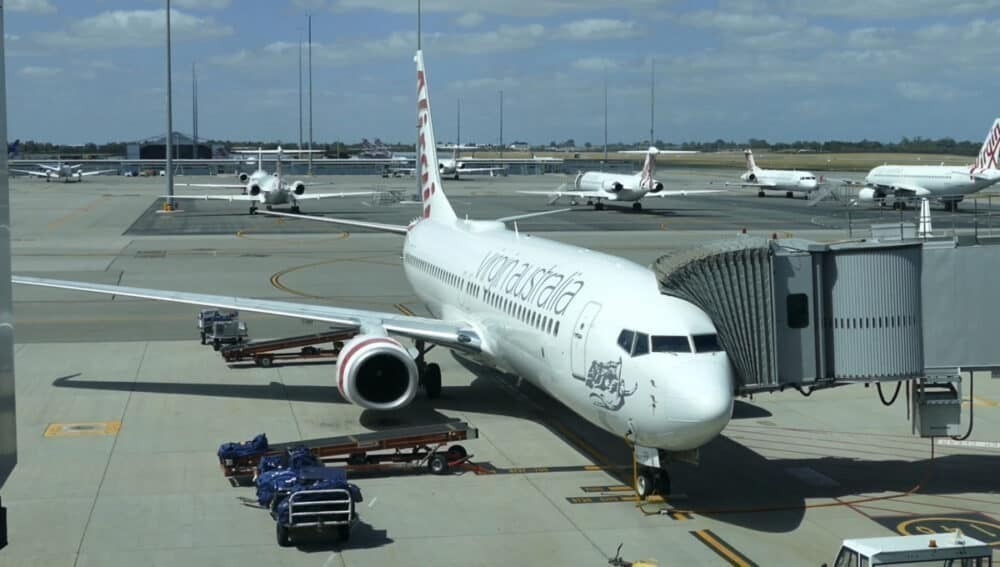 Boarding for the rear half of the aircraft was done via the rear stairs as opposed to the jetbridge. 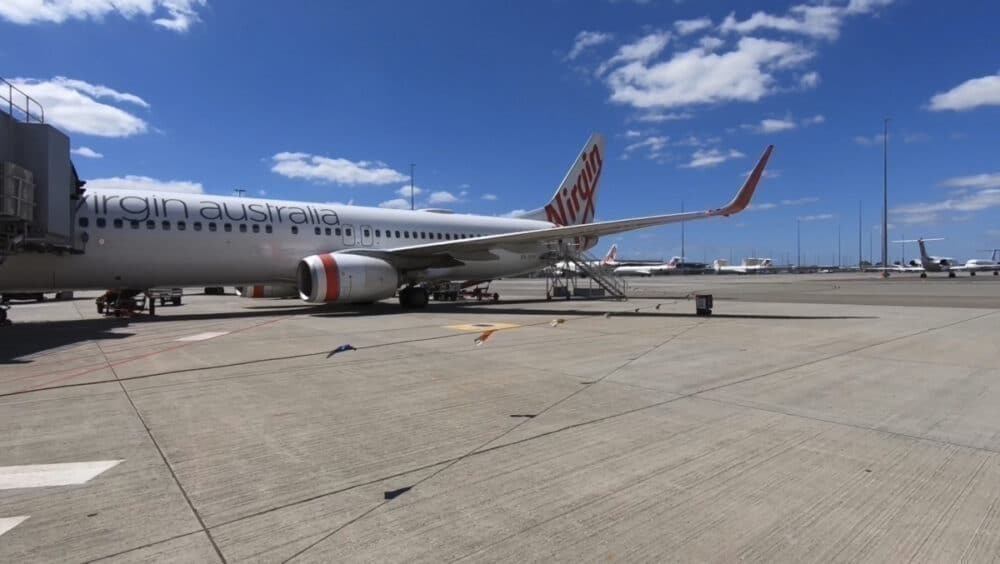 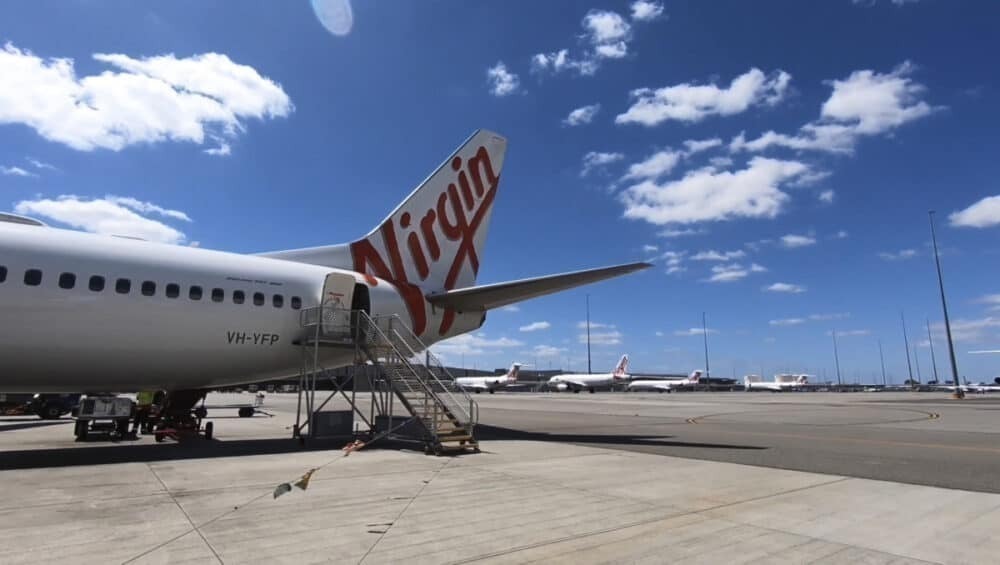 I’d assigned myself the last row, seat 30A. I often do this in economy because, in my experience, the last seats to be assigned are middle seats on the back row, giving an increased chance of a free middle seat. I find this valuable as I’m often carrying camera gear. 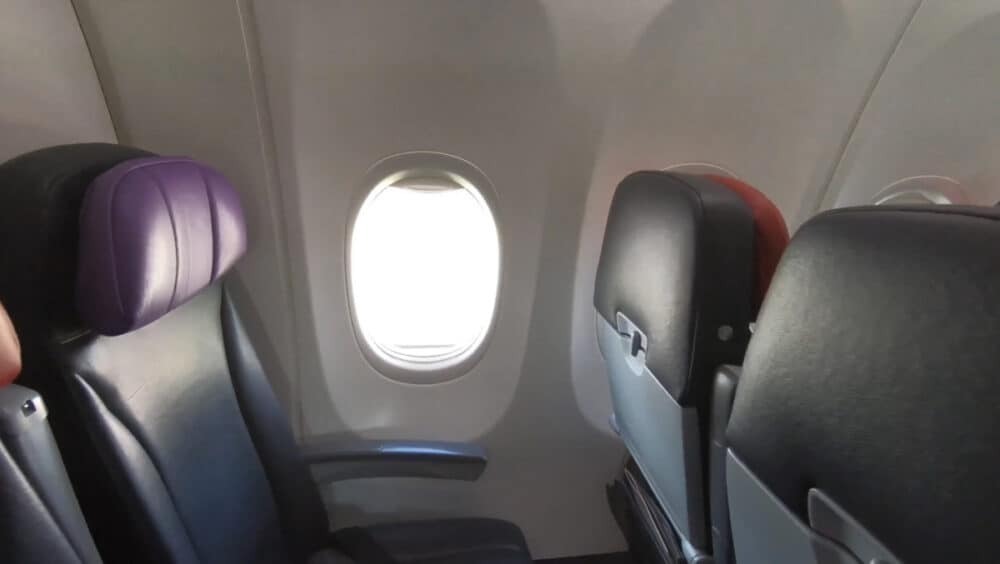 Economy class is in a standard 3-3 configuration. 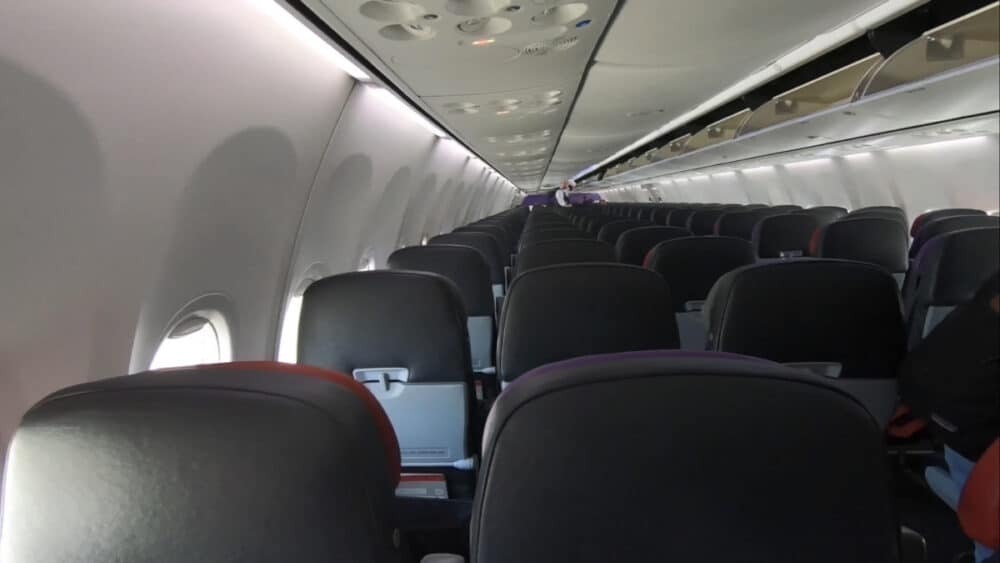 Departure was to the south, and then a sharp turn to the east to head to Sydney via the Great Australian Bight. 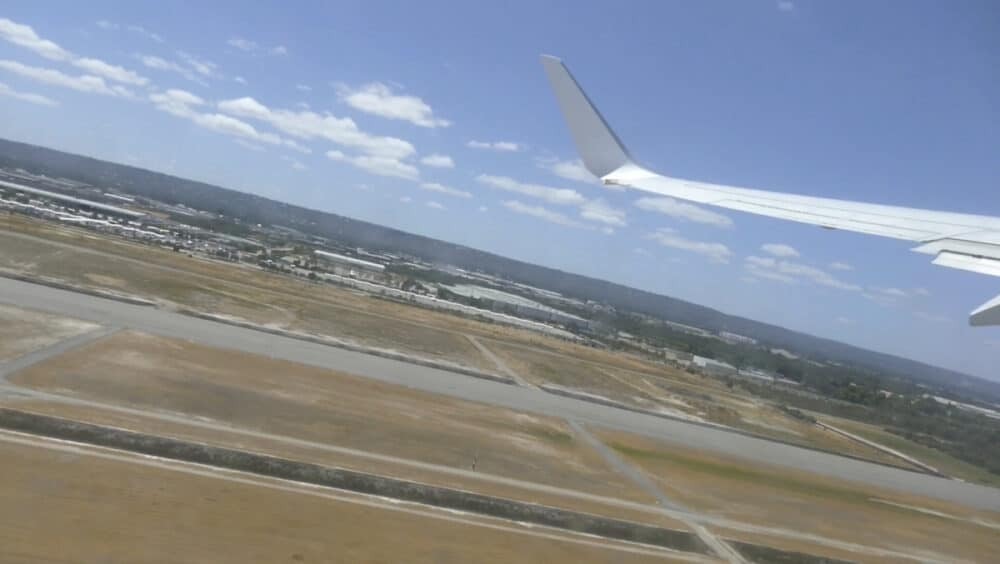 Virgin Australia’s economy seats all come with a fold down, full size table. 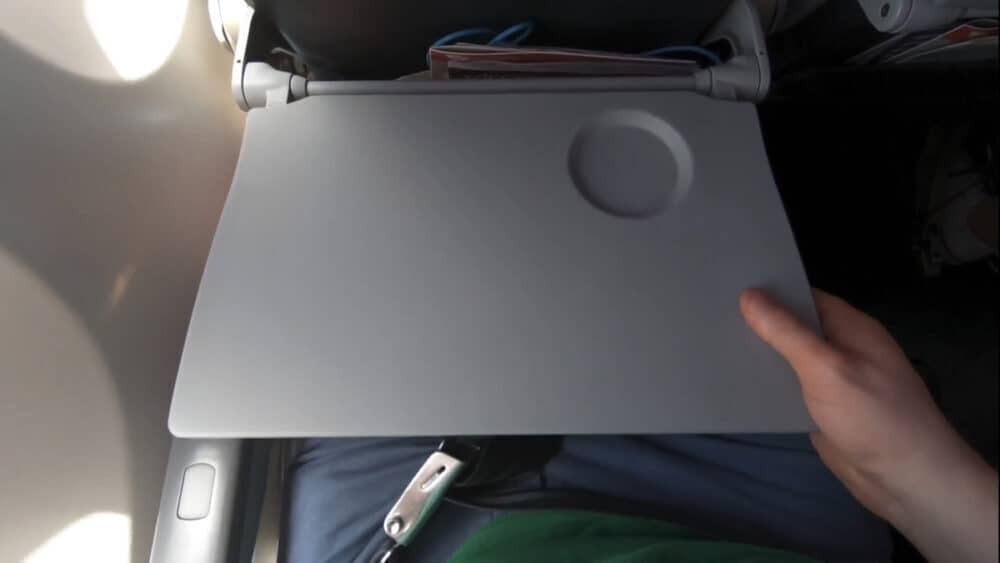 Seat pitch is 31 inches, which should be fine for most people – it’s fairly standard. 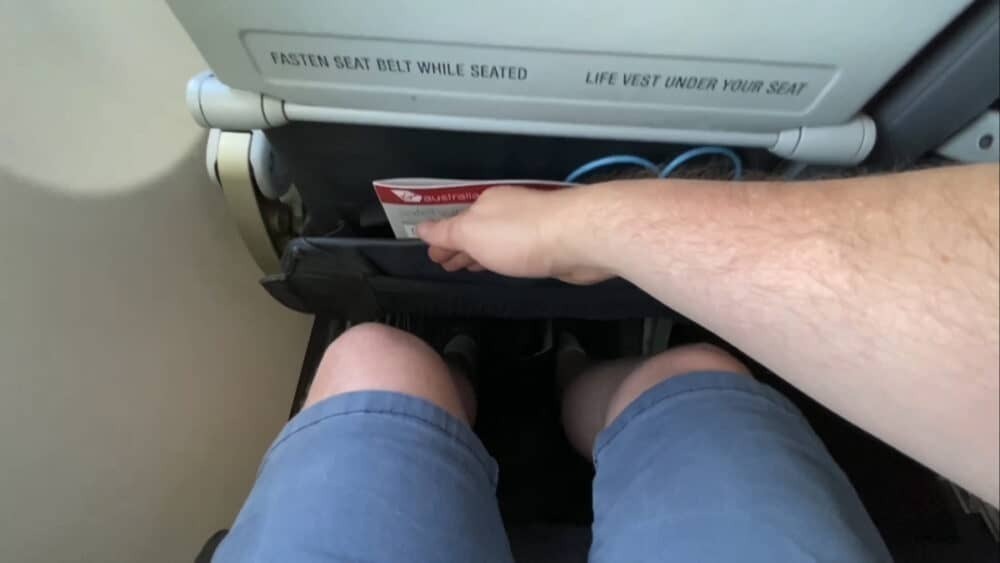 WiFi is free on Virgin Australia’s domestic flights and worked well, allowing me to track the flight via FlightRadar. There are some IFE options on the WiFi app too, though I didn’t watch anything on this trip, as I had some work to do. 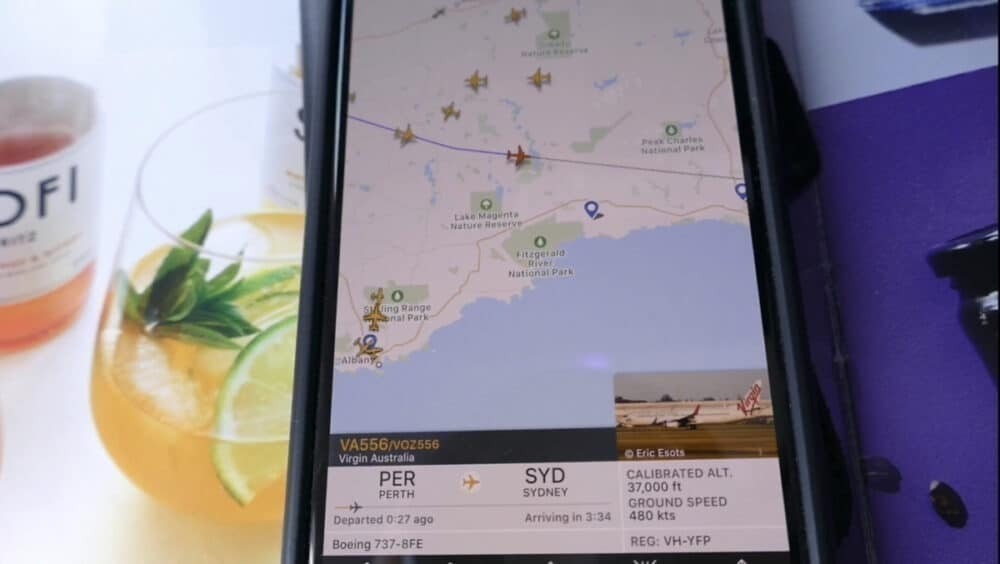 All of Virgin Australia’s fares come with free snacks, and on longer flights like this, a full meal. Alcohol must be paid for, though, and there’s a menu available. Pricing is pretty much what you would expect in the air; not terribly extortionate, but perhaps a little more expensive than what you’d find in a bar on the ground. 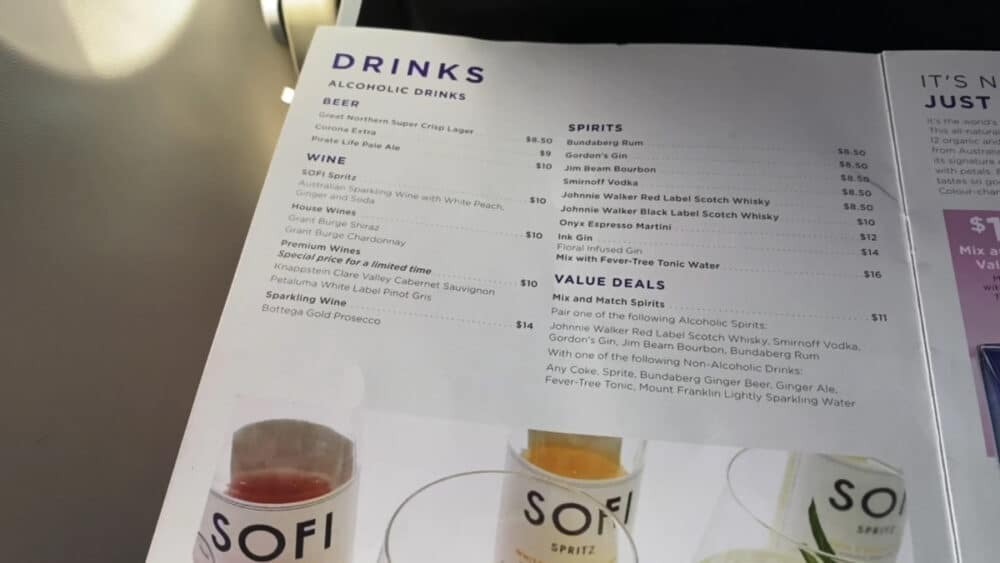 A hot meal appeared around midday and was nicely presented in a red-topped microwave tray. 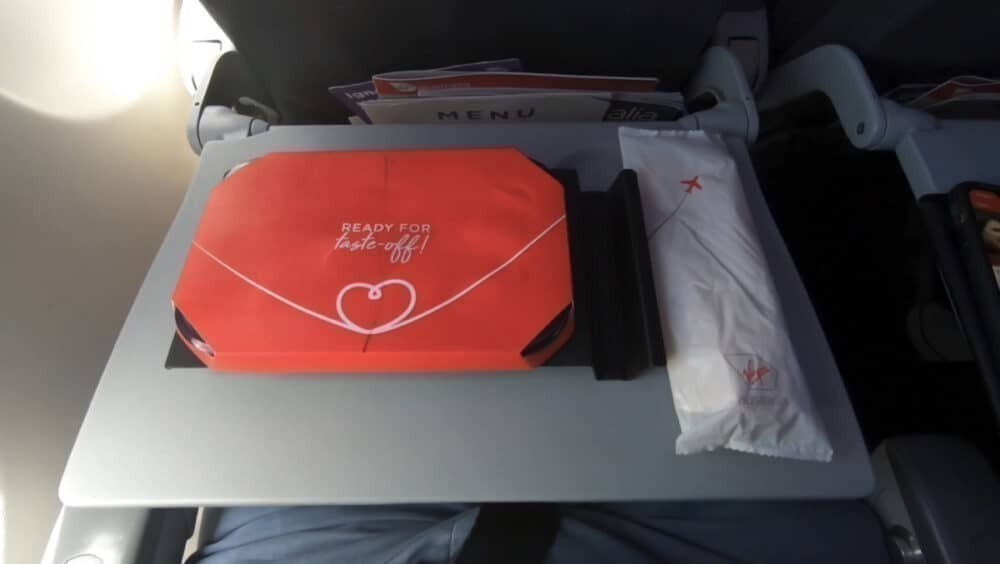 This was surprisingly delicious – braised beef with mashed potatoes and peas – a dish I’ve had so often back in Britain that it was a pleasant surprise to see it 10,000 miles away in exactly the same format! This was a reasonable portion and more than adequate for lunch. Flying in Australia may be expensive, but my impression of the service with the airlines there was unequivocally positive. 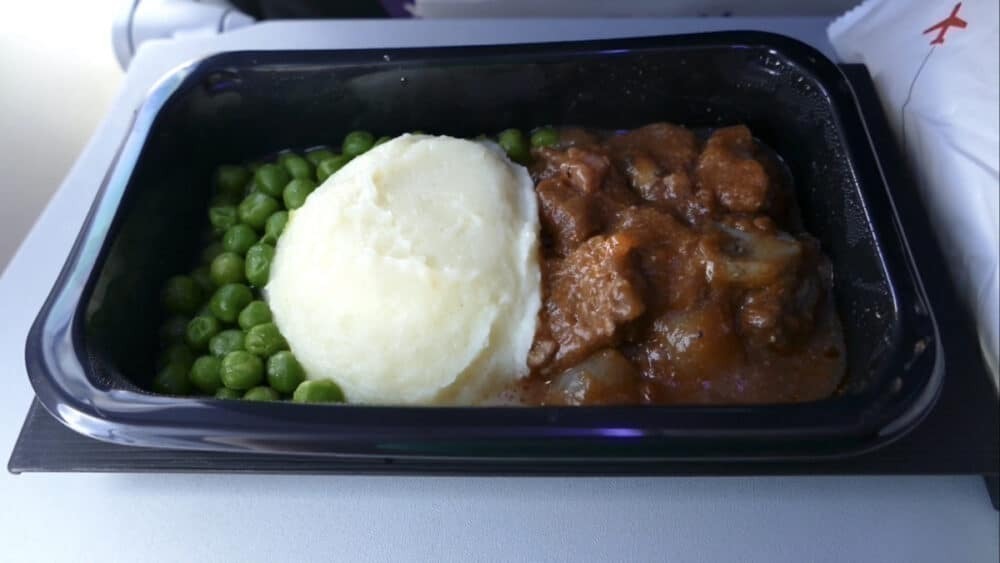 I bought a local beer to pass the time. I’m not a beer sort of guy, but I make a point of trying local things wherever I can. 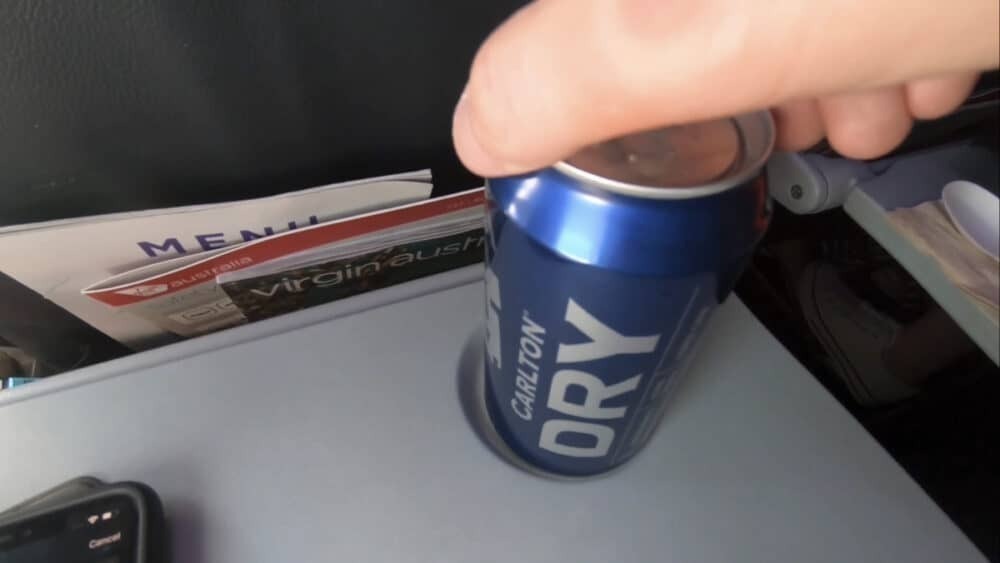 There are two bathrooms at the rear of Virgin’s 737s, which are a regular size and were clean, even towards the end of the flight. 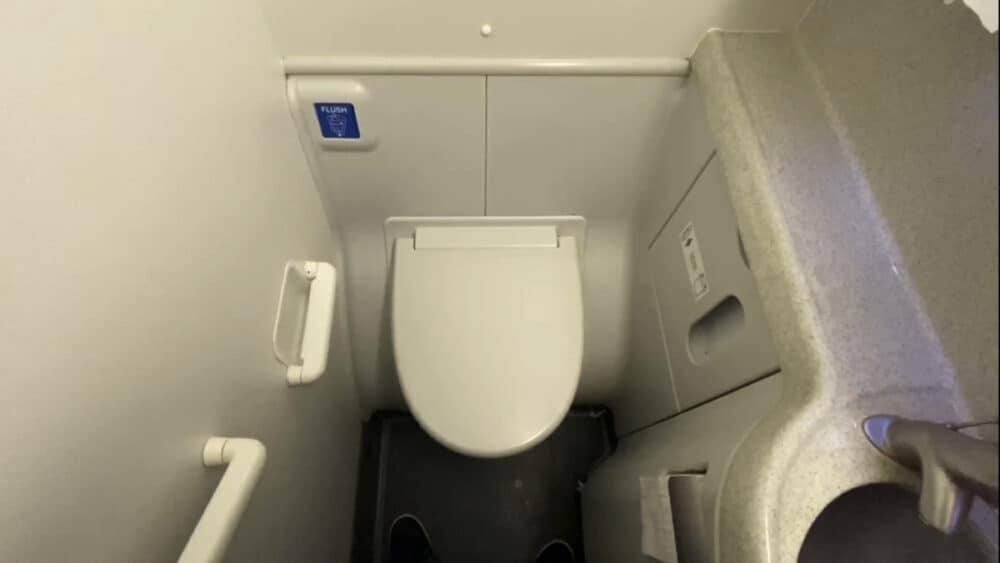 There was a second service of tea and coffee prior to landing. In general, I found the service on Virgin Australia to be delivered with the same panache as Virgin Atlantic. Both airlines have faced a precarious future, but I was glad to see the Australian arm found a buyer in the past week. 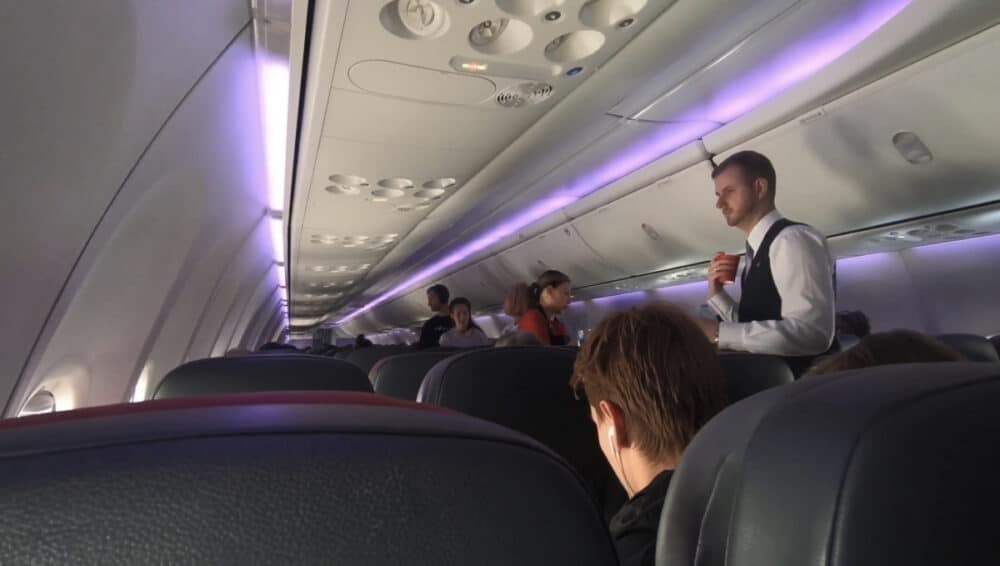 I hope to fly Virgin Australia again in the future when the country’s borders reopen. The airline may look different in 2021, thanks to COVID-19 shock hitting the industry, but it will exist and still be serving passengers. For now, neither Virgin nor Qantas are flying outside of Australia.

Next time, I might take out a mortgage and fly business class! 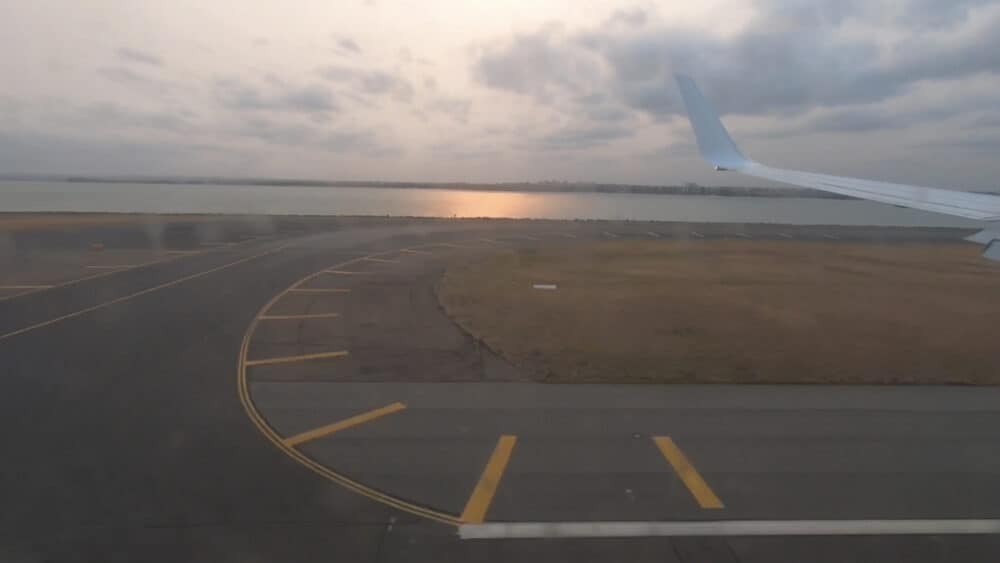