Flybe 2.0 All Set To Operate Out Of Birmingham

United Kingdom Regional airline Flybe has announced its new headquarters, and its first crew base will be at Birmingham Airport (BHX). The UK short-haul carrier collapsed into administration in March last year, shortly before the COVID-19 pandemic forced the world into a global lockdown.

Now reborn as Flybe 2.0, the airline plans to resume both domestic and international flights from its Birmingham base as early as 2022. Headquartered at Birmingham Airport’s Diamond House, Flybe says it expects to create 200 jobs in and around Birmingham over the next three years.

The announcement of the Birmingham base follows the sale of the former airline’s assets and intellectual property in April to Thyme Opco Limited (now renamed Flybe Limited). When speaking about the new Birmingham base with The Business Desk, Flybe CEO Dave Pflieger said,

“We are thrilled to be partnering with Birmingham Airport (BHX), the City of Birmingham, and the Mayor of West Midlands to make BHX the location of our new headquarters and first crew base. It was an ideal choice for us due to its great people and highly skilled workforce, its central UK location, and the fact that Birmingham Airport is a global travel hub where local and connecting customers have access to over 150 worldwide destinations. Today’s announcement marks the culmination of over 12 months of dedicated hard work by all involved, and it would not have been possible without the support of the CAA and the UK Government.”

When speaking about how happy he was to see Flybe selecting Birmingham Airport (BHX) for its first base West Midlands Mayor Andy Street said,

“It really is such brilliant news that Flybe is coming back as a commercial airline, and even better that it has chosen Birmingham to house its new headquarters. Not only does this mean better domestic and international connectivity for our region as well as local jobs and opportunities being created here, but it’s yet another show of faith in the West Midlands with businesses choosing to commit to our region as we recover from the pandemic.

“Flybe’s choice highlights the strength of the aerospace sector in the West Midlands and the talent pool available, and I wish Dave and his team all the very best ahead of their official launch early next year.”

“Flybe’s announcement that Birmingham has been chosen to become the headquarters for its launch next spring is fantastic news for our region’s connectivity needs, and it will bring with it some great new employment opportunities. Dave’s vast experience in managing startup airlines and turnaround situations, coupled with the recovery of the Midlands’ economy post-COVID-19, means that Flybe’s return to the skies from Birmingham is a shot in the arm for our airport as well as West Midlands businesses and communities. We look forward to working with Dave and his team in preparation for next spring and to launch such a well-known brand here in Birmingham.”

Pflieger added: “I also want to emphasize that a key area of focus from day one for Flybe will be environmental sustainability and ensuring we do everything possible to reduce our carbon footprint and GHGs. Our entire fleet will be comprised of the De Havilland Canada Dash 8-400, which is a fast turboprop-powered aircraft that can complete short journeys almost as quickly as a regional jet but with lower CO2 emissions. In addition, we will also be partnering with local community charities and partners who are focused on the environment as well as other causes which align with our corporate goals and values.

“As for what’s next, please stay tuned. We plan to provide more information in the coming weeks and months about ticket prices, new routes, and destinations, and other important news that will help customers visit loved ones, get away for a weekend and get out on business trips. This is an incredibly exciting time for us, and we look forward to sharing more updates in the future.”

Located roughly 100 miles north of London, Birmingham is the second-largest city in the United Kingdom, with around 3.6 million inhabitants within the metropolitan area. Birmingham Airport (BHX) is located seven miles southeast of the city center in the borough of Solihull. Opened in 1939, the airport was used as a training base for the Royal Air Force and Royal Navy Fleet Air Arm before reverting back to civilian use in 1946.

Today passengers can fly from Birmingham Airport’s single runway to destinations in the UK, Europe, Middle East, Indian Subcontinent, United States, and the Caribbean. Birmingham Airport is an operating base for Jet2.com, Ryanair, and TUI Airways, and soon-to-be Flybe.

It is interesting that Flybe initially plans to operate a single type of aircraft, the De Havilland Canada Dash 8-400. Strategically this is a good move as it allows for better crew familiarization and streamlined maintenance, training, and repairs. Due to its short takeoff and landing capabilities, the De Havilland Canada Dash 8-400 is the perfect choice of aircraft for a regional startup like Flybe.

The plane can be flown at slow speeds to minimize fuel burn or faster speeds to increase productivity. Offering the same operating costs as other competing 76 seat turboprops, the Dash 8-400 can be configured with 90 seats and has a longer maintenance interval saving airlines a considerable amount of money over the long term.

It will be nice to see Flybe back at UK airports, and hopefully, they will restore some of the routes that the former Flybe flew.

What do you think about Flybe choosing Birmingham as its first base? Please tell us what you think in the comments. 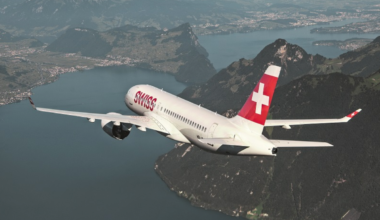 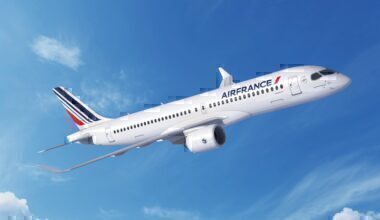