Flying A Seaplane With Harbour Air – Nanaimo To Vancouver

Some of the great joys of visiting the Pacific Northwest are the copious opportunities to do some unusual flying. The area abounds with bush flying and seaplane operators, and Harbour Air are one of the more established operators, founded in 1982. 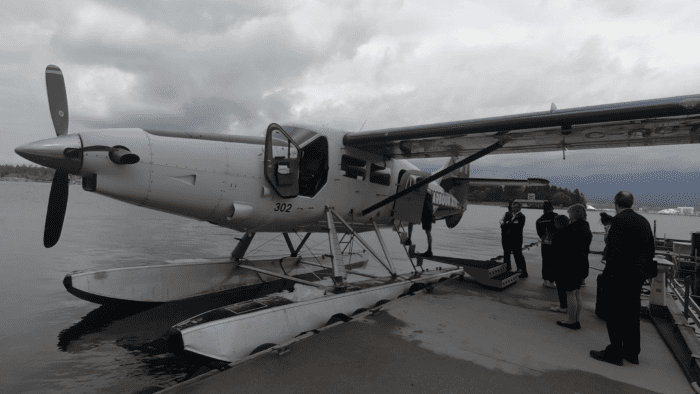 Finding myself in the vicinity following my trip on WestJet’s inaugural 787 service from London Gatwick, I couldn’t help but sample my first seaplane experience, on the short, 39-mile route between Nanaimo and Vancouver Harbour.

Naturally, I filmed the experience for my YouTube channel:

Nanaimo is a popular tourist seaside resort on Vancouver Island. 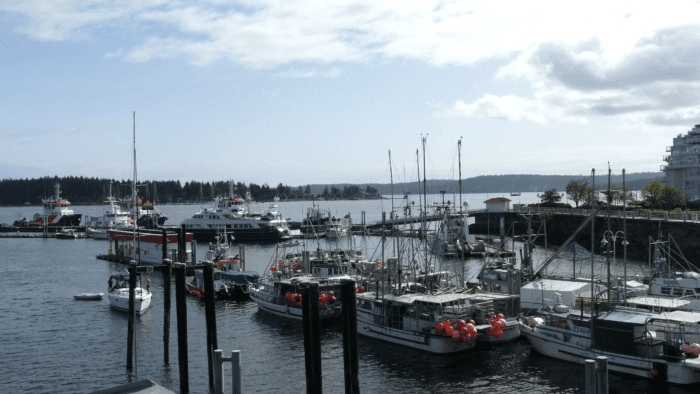 It’s in a beautiful setting and has a serene harbour abutting a charming high street. Harbour Air operate from the southern harbour and fly to Victoria, Vancouver Airport (which has a seaplane facility!) and Vancouver Harbour from here.

The terminal is in a quirky wooden structure jutting out into the sea – of course, this being a seaplane operation, it’s rather like catching a ferry that happens to fly. Check in happens just over the street in a small building with two desks. Bags – including hand bags – will be weighed. Balance is everything on small aircraft. 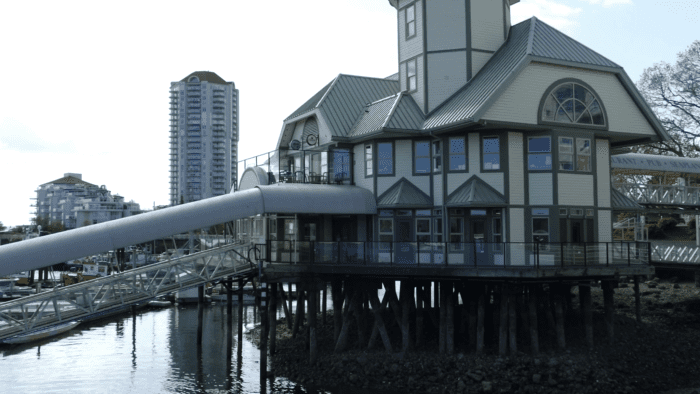 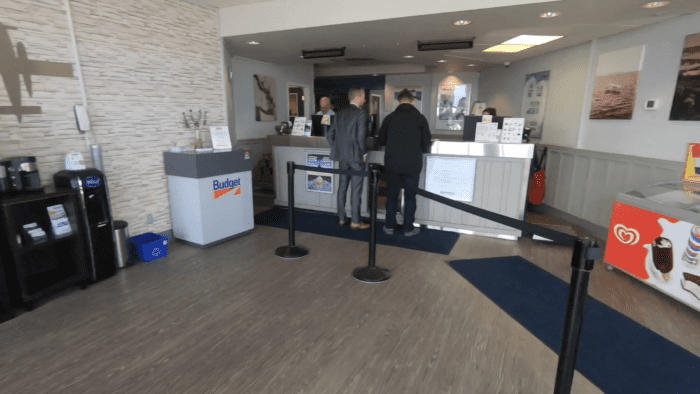 If you do need to check a bag, you’ll need the GoGold fare. This cost me 129 CAD (about £73) one way. It’s not cheap for the 30-minute flight, but it does come with flexibility and refundability, priority seating and a drink voucher for either the Nanaimo or Vancouver pubs located by the terminals. Travel in the off peak during the middle of the day and you can snap up the experience for as little as 76 CAD, with no bag, no refunds and last choice of seats. 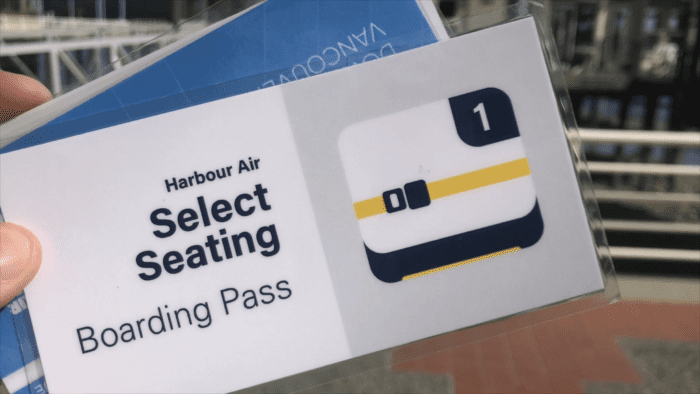 The terminal is just steps away from check in and the waiting room is small and functional. Free local newspapers, coffee, tea and water are provided. Nearly all the passengers on this route are commuters or business travellers, taking the seaplane with the casual attitude most of us attribute to catching the bus. 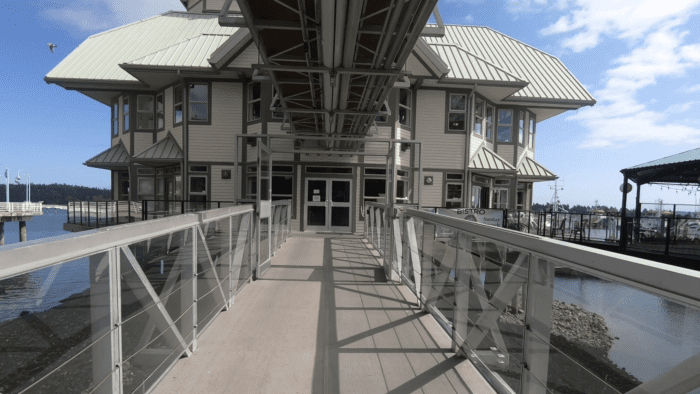 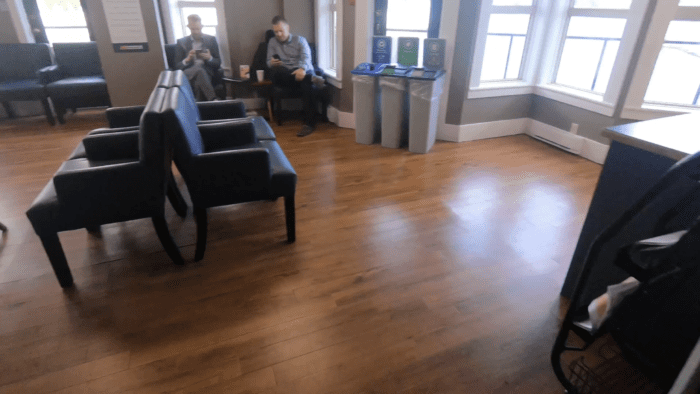 Today’s aircraft is a DHC-3 Turbo Otter, and it arrived punctually from Vancouver Harbour. Boarding happens quickly and the pilot collects you from the departure lounge (waiting room!), and escorts you to the aircraft. Be careful – it’s a pier, not a jetway, so watch your step. 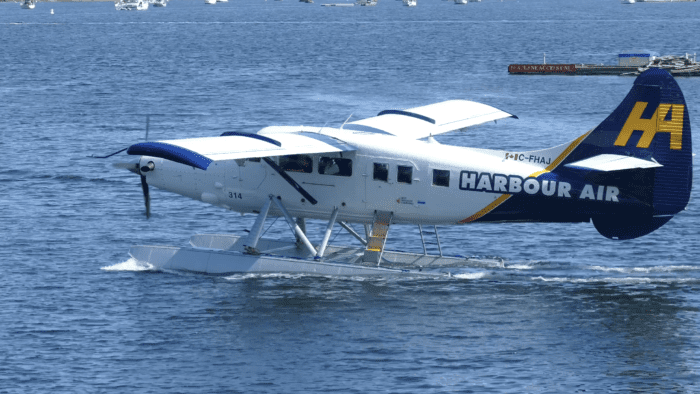 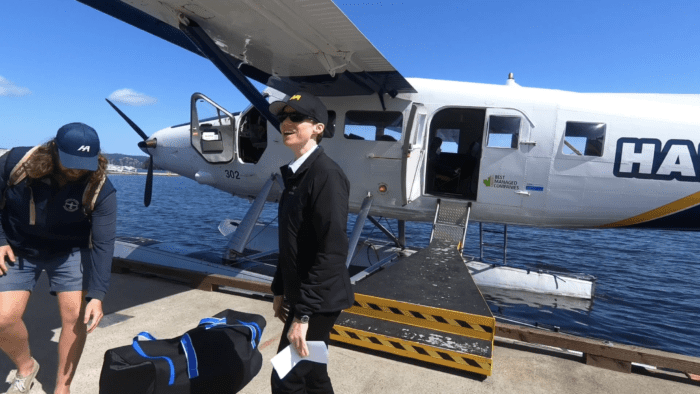 My reserved seat was 1, which is a single seat on the left side right behind the pilots. Sometimes, Harbour Air have single pilot operations and it’s been known for them to allow enthusiastic passengers into the co-pilot seat, but today there were two pilots and I’d have to make do with a regular one! The legroom is acceptable for such a small aircraft. 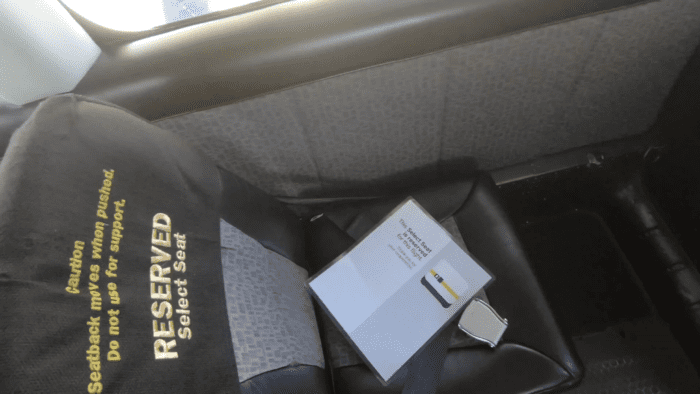 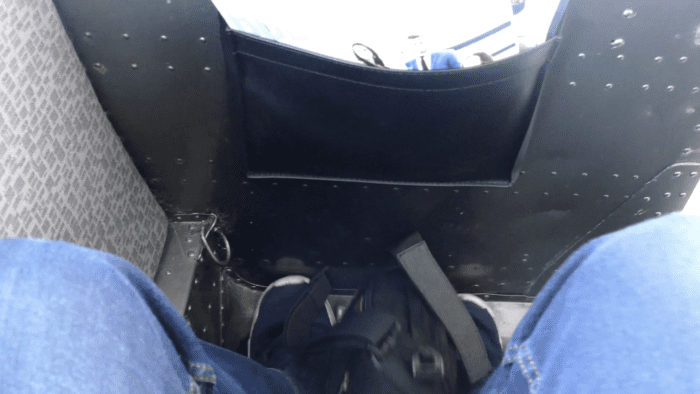 Still, the seat allows for good visibility of the open cockpit and the windows at the front are large – Harbour Air also operate sightseeing tours. 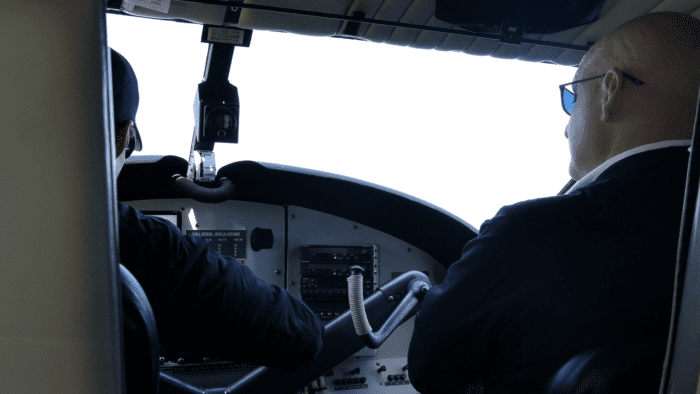 The cabin is in a 2-1 configuration and features 14 seats. 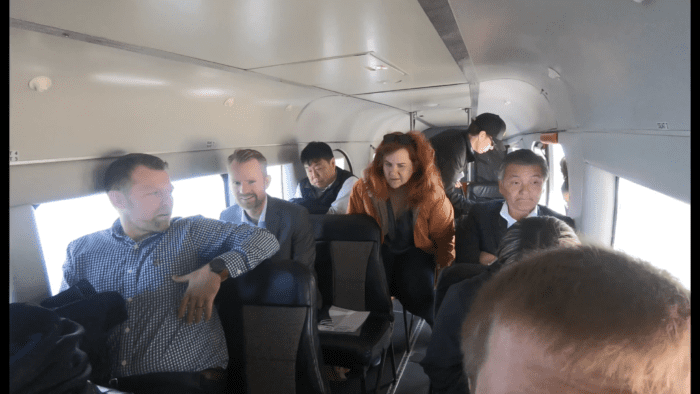 Takeoff is brisk but somewhat different to a wheeled aircraft. A seaplane begins “flying” quite early in the roll; the aircraft floats rise to the surface and most of the takeoff roll involves skimming the waves until the aircraft becomes properly airborne. A wheeled aircraft never feels like it’ll fly until the pilot rotates the nose. The same applies for landing – the seaplane skims the water until a very low speed, at which point it “dies” and sinks into the water, becoming a boat again. 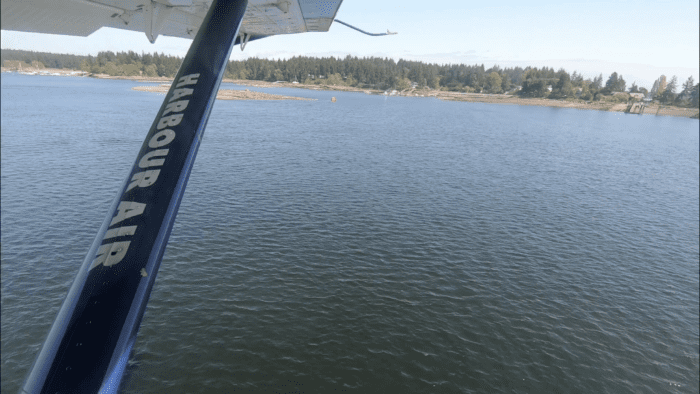 The views on takeoff are superb, and a shallow left turn allowed a good view of Nanaimo disappearing behind us. 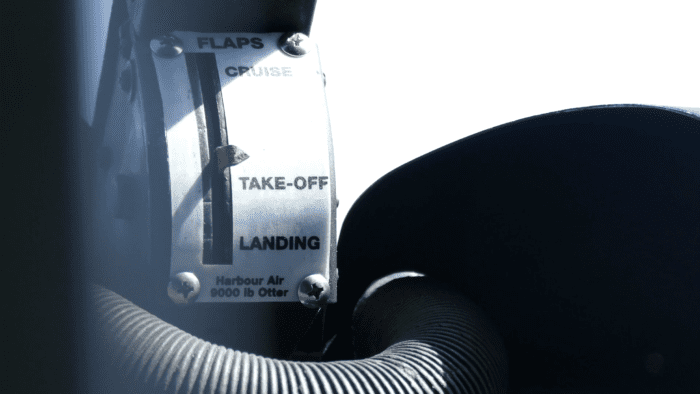 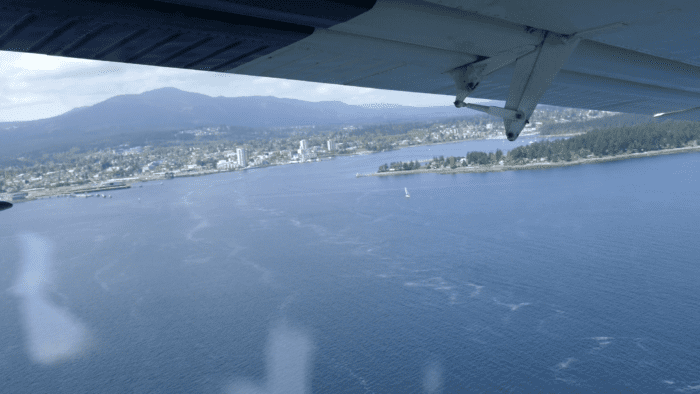 Onboard are a local business magazine and the company’s route map, which is extensive and covers a good portion of the Vancouver area. They also fly internationally to Seattle. 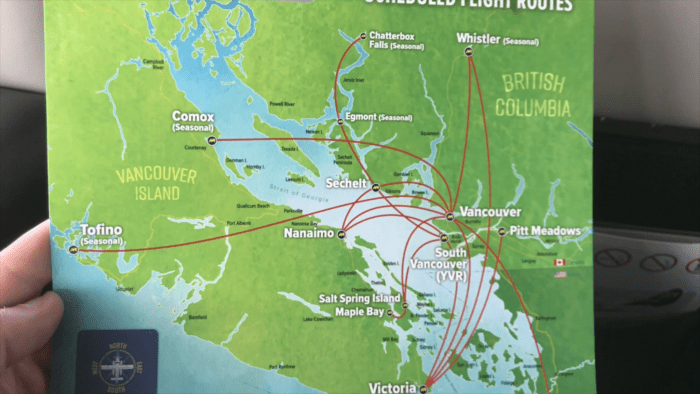 The first two windows on the Turbo Otter are actually bubbles – this allows you to poke your head outside the line of the fuselage and get a good look forward down the nose. 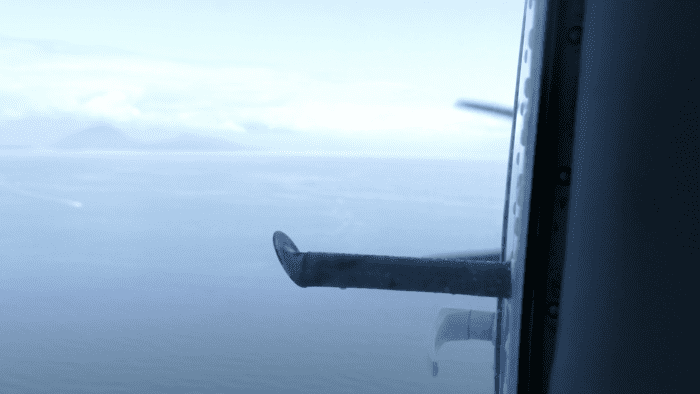 The Strait of Georgia, separating Vancouver Island from the city, is a busy thoroughfare. I spotted several ferries plying their trade as well as two outbound Harbour Air seaplanes travelling in the opposite direction to us. 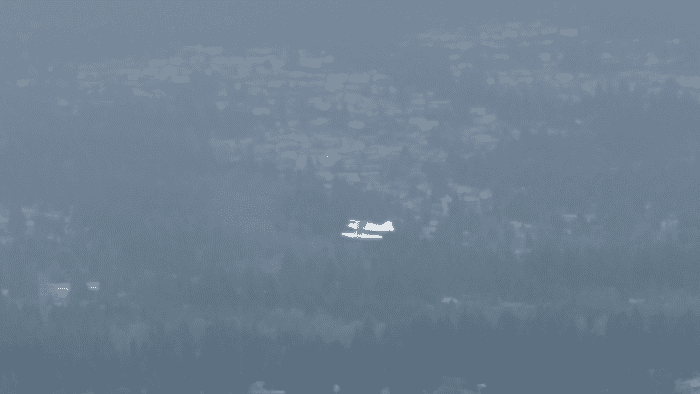 After 20 minutes, we power back and come in for a surprisingly steep landing in the harbour. 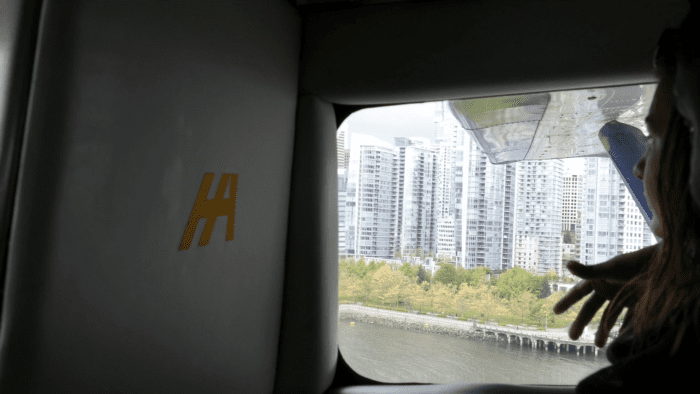 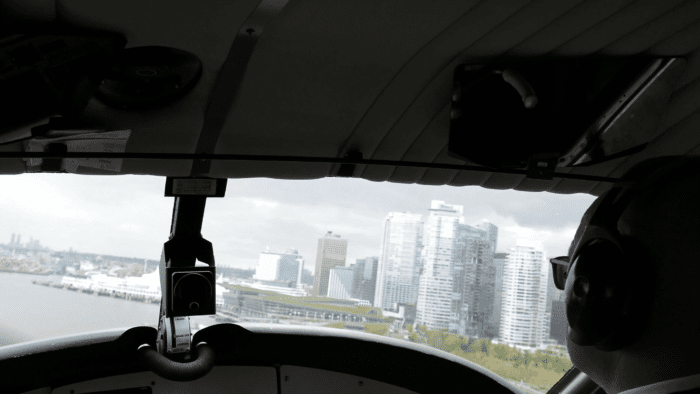 Taxiing is is straightforward and takes no time at all. Luggage is collected at the door of the aircraft. 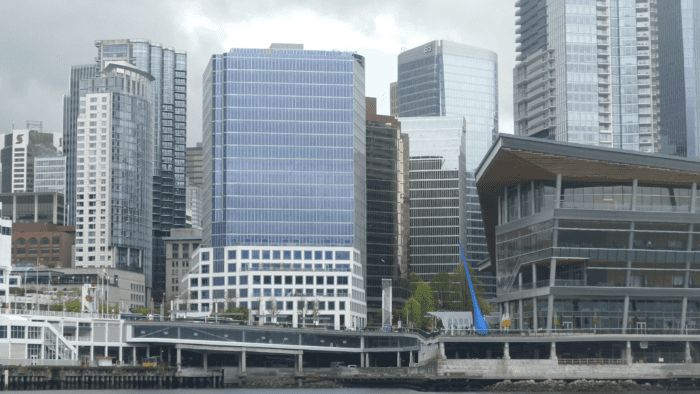 Overall, Harbour Air provide a great commuter service and I was grateful for the opportunity to share the beauty of Vancouver from such a sublime position. It was a welcome change of pace from hopping on and off jets internationally. 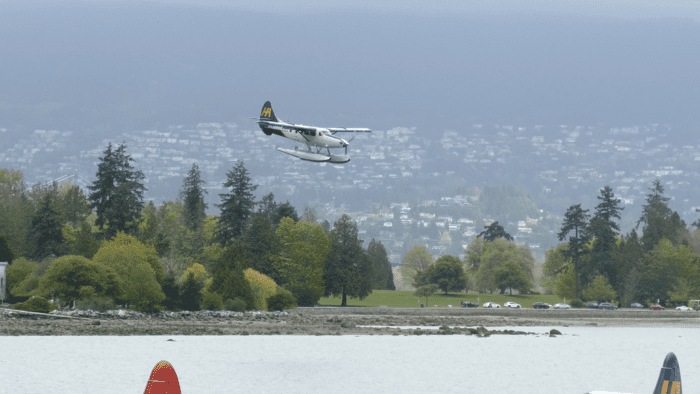