WestJet’s new 787 Dreamliner departed London on its inaugural London to Calgary flight on Monday 29th April. I was lucky enough to be aboard with a few other aviation geeks, thanks to a promotional fare. 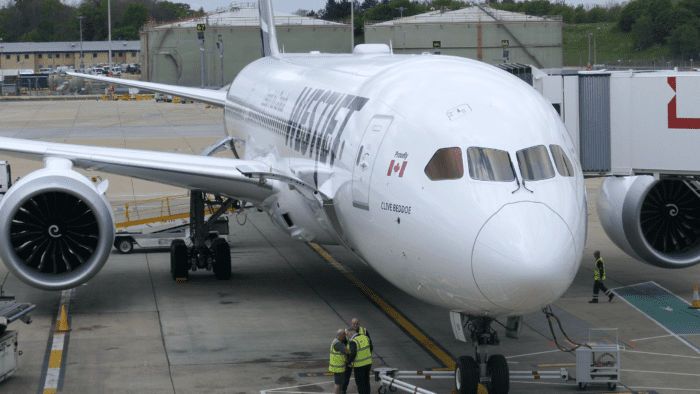 WestJet – historically a low cost carrier – has decided to bring the fight to legacy airlines by playing Air Canada and British Airways at their own game. Their new 787-9 Dreamliner features a brand new lie flat business class, the first time they have flown this cabin in their history. Can WestJet hold a candle to experience? I was aboard to find out, and film the experience for my YouTube channel:

WestJet operate from Gatwick’s North Terminal and have a self-service baggage check (even in business class). The concept is straightforward and I was through in just a few minutes. 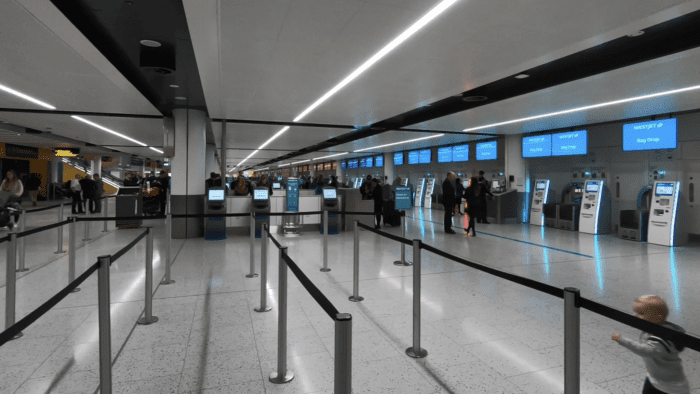 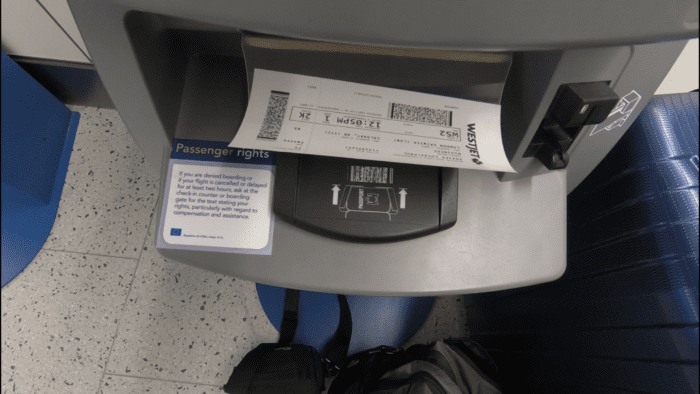 The designated lounge for business class customers is the Club Rooms Lounge, on Level One. This is a small, smart, exclusive-feeling lounge with a-la-carte breakfast and I like it very much, even though it doesn’t have any sort of apron view, being down in the bowels of the terminal. This is a good choice for WestJet, as the main No1 Lounge and MyLounge upstairs can get busy and don’t have the same ambience. 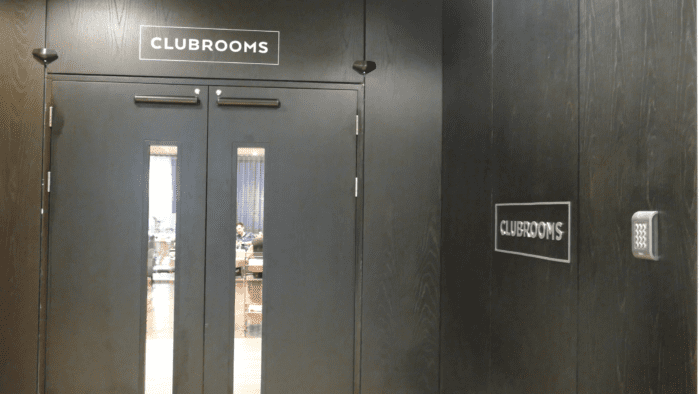 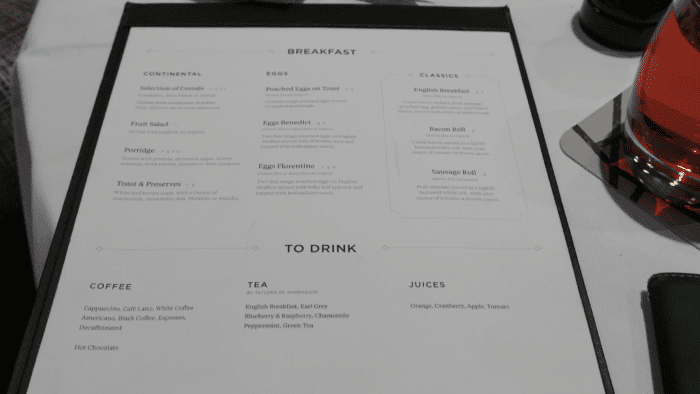 At the gate, a small welcoming party was in progress. There was champagne and juice, goody bags, and a super cake in the shape of a Dreamliner. All of the staff were happy to indulge both the numerous aviation enthusiasts that were taking the inaugural flight, as well as the majority of “normal” passengers! 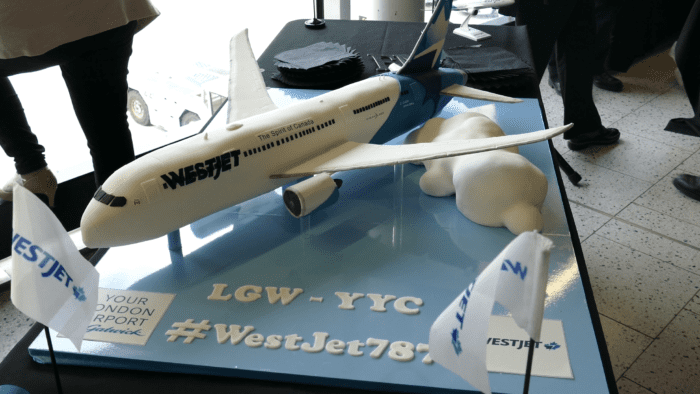 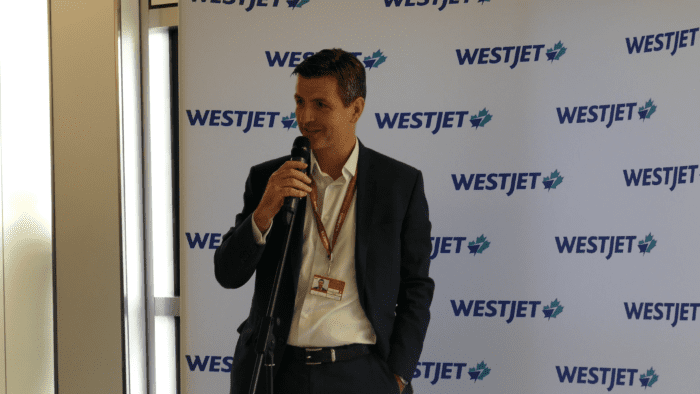 Once onboard, I turned left and entered the Premium Economy cabin. Arranged 2-3-2, there are 28 slick seats here. WestJet installed just 16 Business Class seats in a 1-2-1 reverse herringbone configuration, and therefore there’s just a partition between the classes rather than a galley, which would naturally be where the doors are. 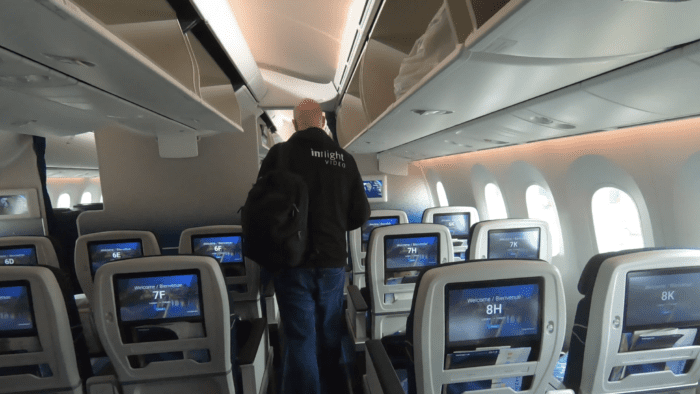 I was very impressed with the cabin ambience. The colour palette is understated and classy, yet subtly different to the competition. Seats are in blue and charcoal, with bulkhead designs in slate grey with attractive relief detailing, recalling the WestJet “star” motif. Clearly, WestJet are serious about wanting to make an impact on the premium transatlantic market. 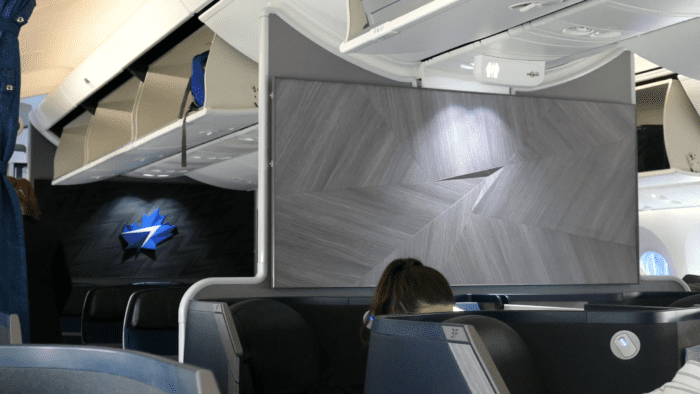 I was in Seat 2K, and found a pillow and blanket waiting for me. 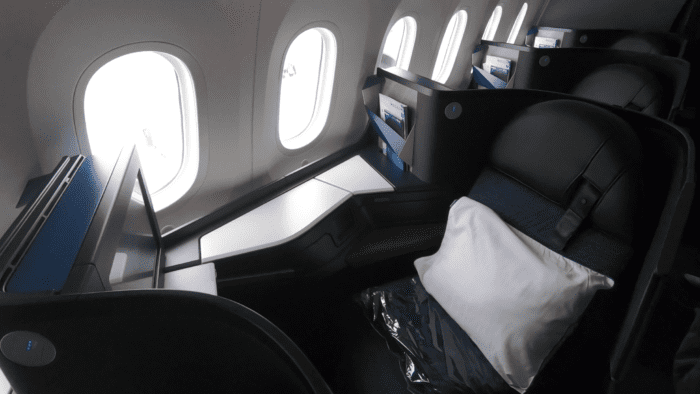 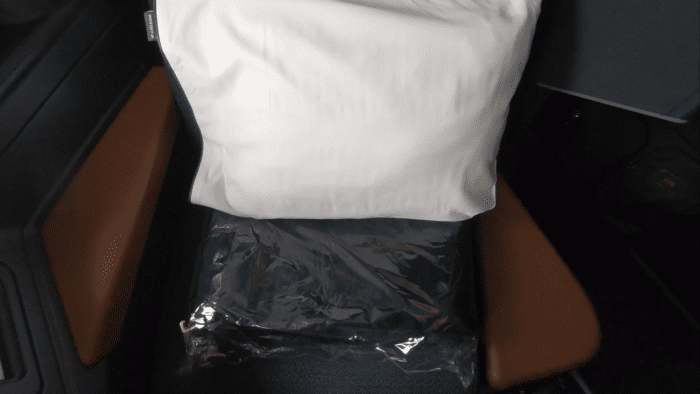 After a pre departure drink of champagne, and a brief panic about my seat’s inability to recline (quickly sorted by Westjet’s maintenance team), it was time to relax for the eight hours and 20 minutes to Calgary. Takeoff was to the east, and the climb out was smooth. 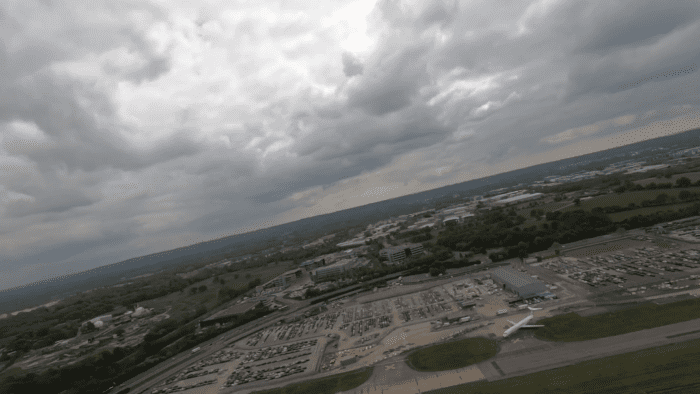 Service began with a signature WestJet drink – green tea, vodka, and cranberry juice. It’s a strange combination but I loved it, against all expectations. This was accompanied by truffle oil popcorn which was likewise delicious. 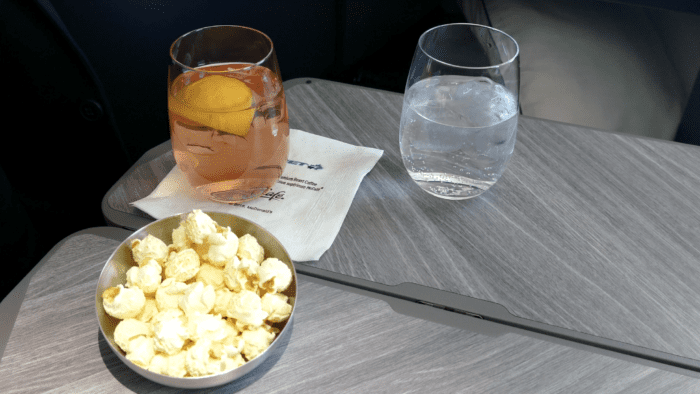 The IFE on board was good if not stellar, and the unbranded noise cancelling headphones were fine. There are options to control the window shades from the IFE screen – useful, as the seat sill partly obstructs the buttons – as well as summon the flight attendant. 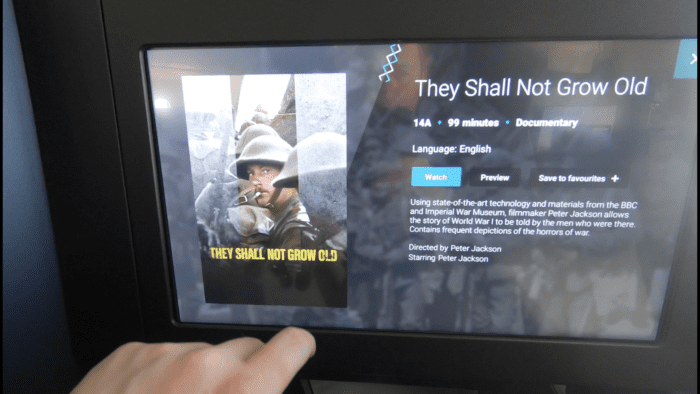 The seat itself is very good indeed. They’re B/E Aerospace Super Diamond seats, which I love because the storage is excellent. There are five separate storage areas, not counting underneath the footrest. Of course, there are USB and power sockets, and a handset to control the IFE or moving map. 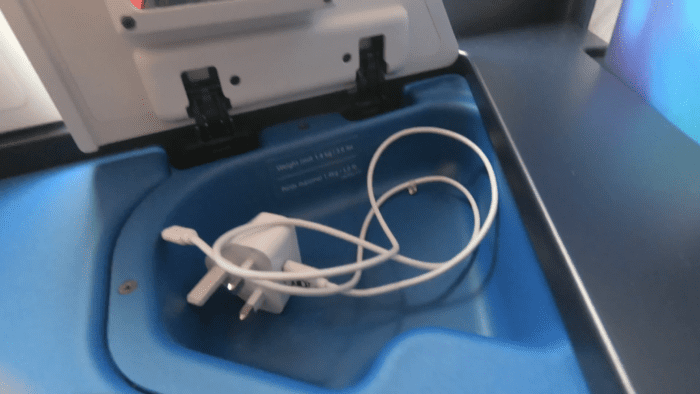 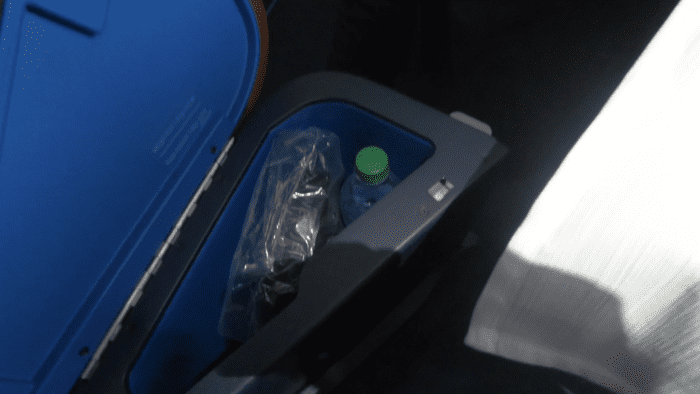 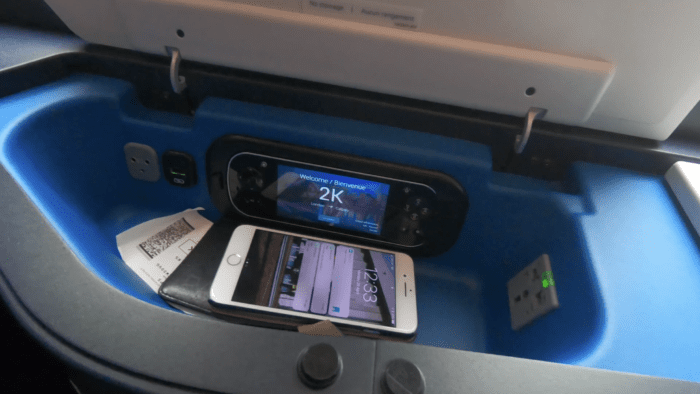 The table is sturdy, and stows away under the fixed entertainment screen. It also has a mid-position which you can clip it into in order for you to exit the seat while the table has things on top of it. It’s attractively finished in a grey faux wood. 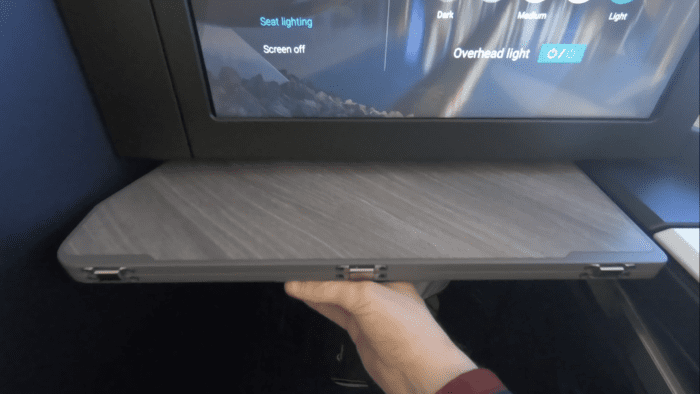 A Matt + Nat amenity kit was handed out, which was basic but sufficient, containing DVT socks, lip balm, moisturiser, eye mask and ear plugs. I’ve never understood the complex amenity kits given out by some airlines, as I am sure much of the contents go to waste. 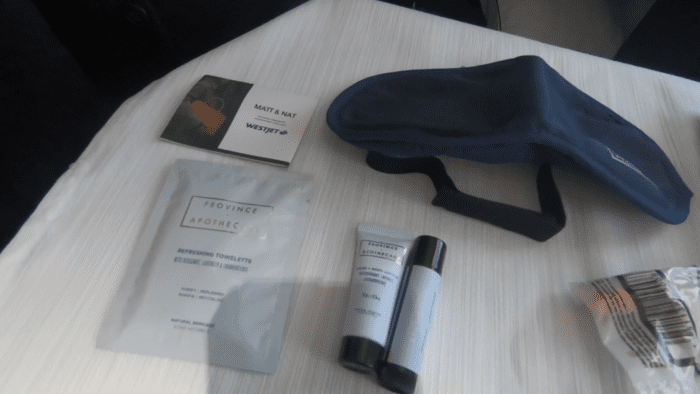 I chose curried chicken terrine, beef cheek, and bread and butter pudding for my meal, along with afternoon tea for my second meal (my still pictures of the menu aren’t good, but the menu can be seen in my video). 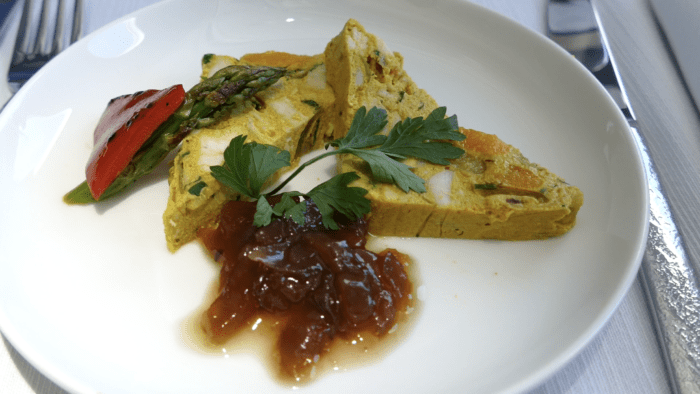 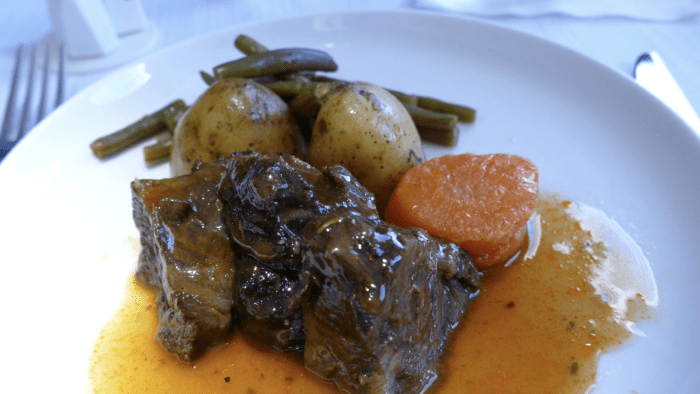 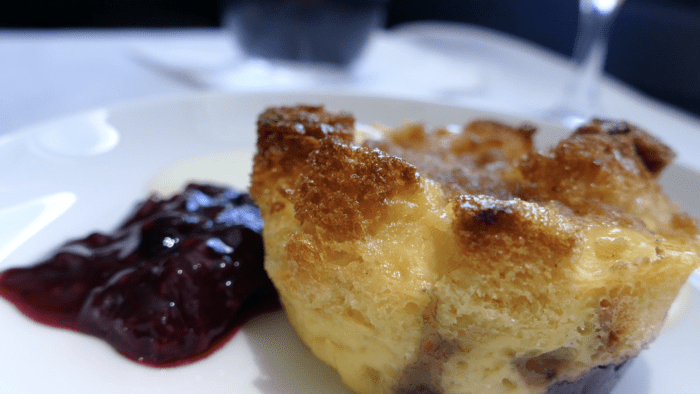 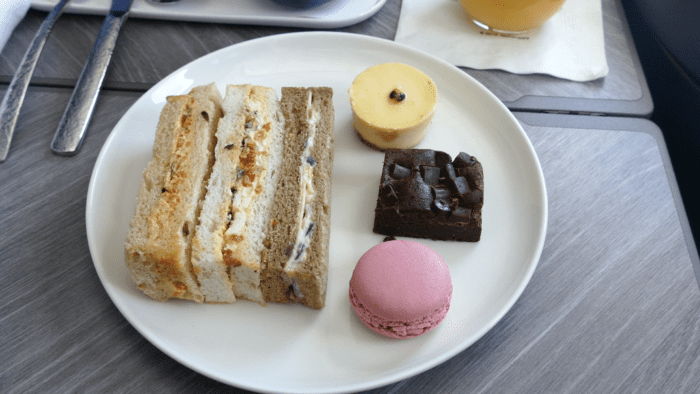 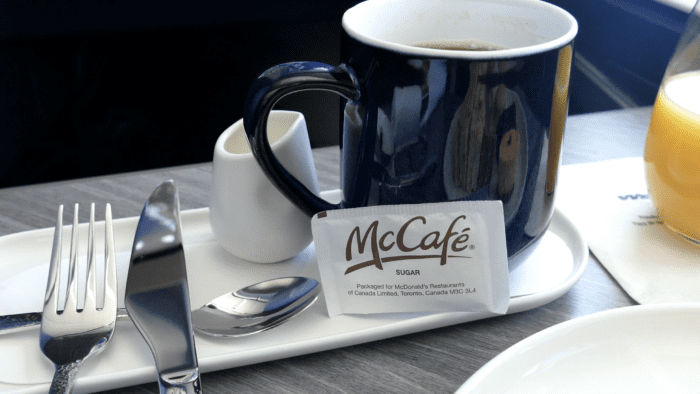 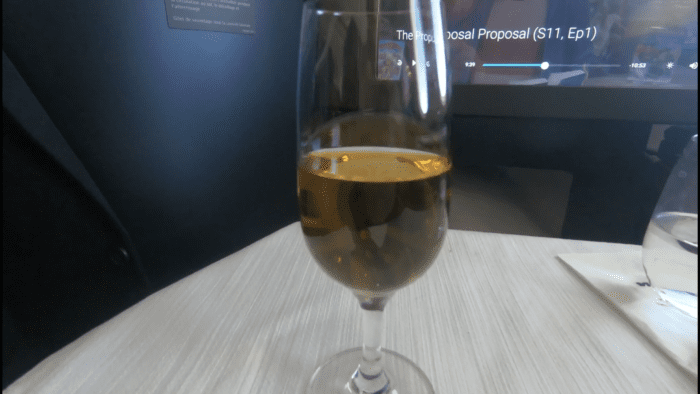 I want to say a bit about food and service. Firstly, the good:

Inaugural flights are always susceptible to the odd thing going wrong, and I’d much rather report the service wasn’t as rehearsed as it should have been rather than the seat being fundamentally flawed. The crew were candid about the failure without ever being unprofessional, and I feel sure WestJet will take steps to rectify whatever went wrong to ensure crews can deliver the service more speedily in future.

The lie flat bed is excellent and the blanket and pillow provided were substantial. There is enough horizontal space to accommodate side sleepers of average size. I had a sound nap for around an hour. You will only struggle with the bed if you’re over 6’2″, I think (I’m afraid I’m only 5’8″, so it’s a guess!).

Passengers in Premium or Business who get peckish can go to the social area WestJet has created in the mid-cabin galley, where snacks are laid out. 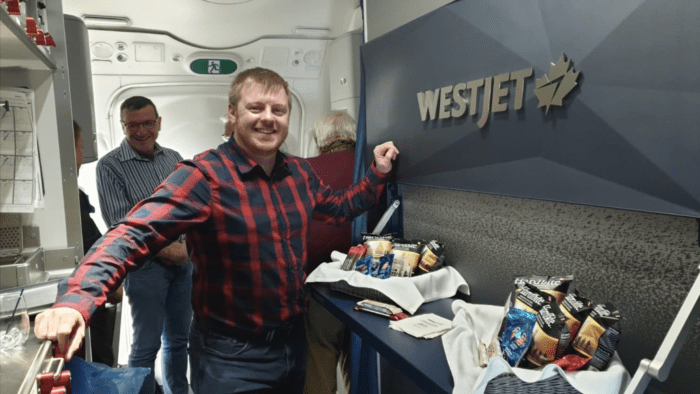 The chocolate snacks are delicious, but I’d have liked to see some fruit there too please WestJet! This is a small space, so I’m a little confused as to why WestJet markets this as a social space to hang out (it definitely isn’t a bar!) as opposed to what it really is, a snack display like the Club Kitchen concept on British Airways (go, grab your snack, go back to your seat and sit down). I get that WestJet is a fun alternative and may attract a demographic that would like a social space, but truth be told, it’s not what they’ve installed.

A boiled maple sweet was handed out before landing. 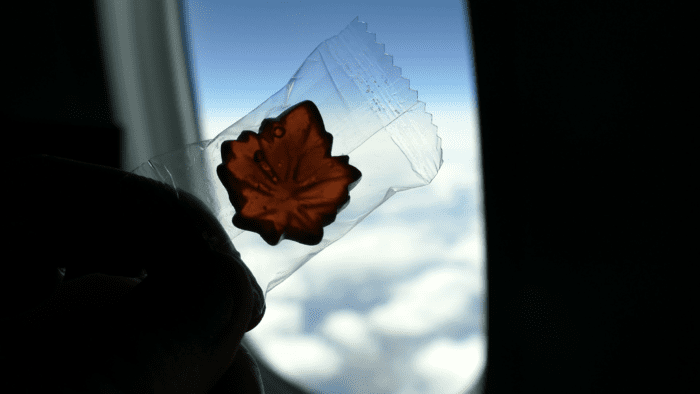 We landed 30 minutes ahead of schedule in a snow-ridden but clear-skied Calgary. 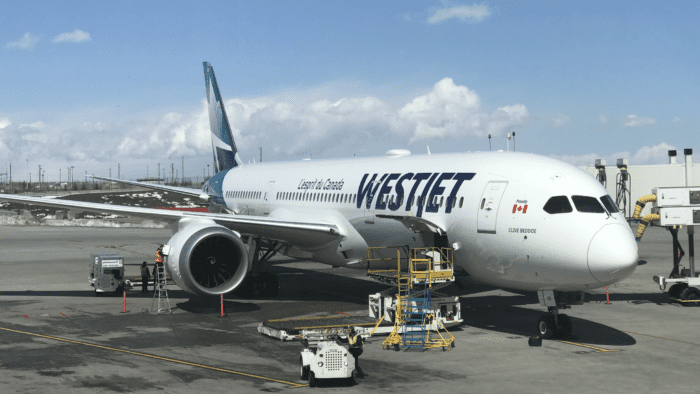 I very much enjoyed my flight with WestJet and thought they had the basics of an excellent long haul product. I’ll happily forgive their bad day with logistics and service, mindful that with experience the company can only improve. I saw more than enough with the seat, service, attitude and vibe to know that WestJet is now a compelling option to Canada in premium cabins.