Passengers and crew succeeded in wrestling to the ground a man aboard a Fuzhou Airlines flight who tried to open a cabin door in mid-air. The flight from Fuzhou to Kunming on 20th May 2019 landed safely. 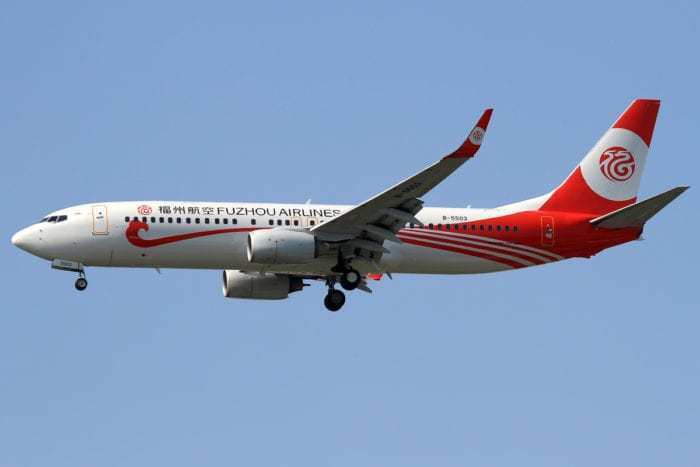 A passenger tried to open a door on a Fuzhou Airlines flight. Image: WikipediaThe crew of Flight 6509 were alerted to a man pacing up and down the cabin. The plane was on the last leg of its journey from Fuzhou to Kunming.

The man, in his 50s, appeared agitated and wanted to speak to his family. But because the flight was just 40 minutes away from its destination the man’s requested was denied. The passenger (who has not yet been named) then became angry and demanded a parachute, writes Tiffany Lo for The Mirror.

10 minutes before the plane landed, he attempted to open one of the doors towards the front of the aircraft. Mobile phone footage of the incident shows the man shouting and hitting seats.

Several passengers became agitated and moved forward to where the man stood. As he lunged for the cabin door, the passengers and flight attendants grabbed him.

One of those who wrestled the man to the ground was Flight Security Officer Zhao Wenhui. According to Lo, Zhao spent two years with a Special Forces task force before being seconded to Fuzhou Airlines.

A handful of other passengers were quick to enter the fray. None too happy with the man’s frenzied attempts to open the door.

Two cabin attendants were injured but not seriously. Flight attendant Lu said, ‘He tried to gouge my eyes. I’m taller than him so he didn’t manage to reach, but my ear and nose were hurt and bleeding.’

Passengers held the man down until the plane landed safely. He was then handed over to Kunming airport police. The airline confirmed no other passengers were hurt.

Police said the man was unwell and had been released without charge. His family have since ‘apologized for the ordeal‘.

We have asked Hainan Airlines (of which Fuzhou is a subsidiary) for further comment on the incident but have so far received no reply.

As previously reported, it is not possible to open any of the cabin doors during flight. Doors of most airliners are ‘plug doors’, designed to be kept in place by differential air pressure. Plug doors are also held secure by a glut of mechanical locks and latches.

Some aircraft have plug doors that open inward to be tilted and lifted through the doorway. Doors that open outwards often have hinged attachments, which recede to allow the door to be pushed out.

On the 2nd of May this year, a passenger with Chinese low-cost carrier Lucky Air successfully opened a cabin door. The Independent reported that Mr Chen had opened the door after the plane landed at Mianyang City.

The 25-year-old complained about the cabin being ‘too stuffy and hot’. He then lifted the latch on the plane’s emergency exit. The door was ejected onto the tarmac and the evacuation slide inflated.

Chen was reportedly horrified at the outcome of his actions. ‘I just pushed down on the window handle beside me,’ he said. ‘When the door fell out, I panicked.’

Police immediately arrested Chen and handed him over to Mianyang Security personnel. He was detained and questioned for two weeks.

The passenger incident echoes a similar mishap in 2014. A Chinese airline passenger managed to open an emergency exit shortly before take-off. In mitigation the passenger explained that he had only wanted to breathe ‘fresh air’.