At 10:50 pm Eastern time on Friday, an Iberia A330 put out an emergency code of 7700. Commonly referred to as ‘squawking 7700’, this code gives the aircraft ATC priority. All air traffic control facilities in the area were then immediately alerted to the emergency. But in the middle of the ocean, there aren’t that many options.

Iberia Miami-Madrid with a stop-over

The pilots aboard the Iberia A330 received an indication of smoke in the crew rest area, which is just below the main deck. Due to its location, there was the possibility of a fire in the cargo hold. And as the crew had no access to this area in-flight, they couldn’t check.

According to our sources, the pilots took the immediate decision to drop to 23,000 feet. Bringing the aircraft out of its cruising altitude is the airline equivalent of driving along the hard shoulder. The pilots were then instructed to head to the nearest strip located at Lajes Field on Terceira Island.

Terceira may seem like a strange choice. As one of the larger islands of the Azores archipelago, the island with an area of approximately 396.75 square km is quite remote. However, it does hold one advantage, Lajes Field is located there. This Portuguese Air Base also has a US detachment stationed there. All in all, making it a great emergency landing option.

There’s no terminal building to bring the passengers off the packed flight. It’s just an airbase

The A330 began its gradual descend, turned shortly after 11 pm, and landed safely at 11:34 pm Eastern-time. As this was a commercial flight, landing at an airbase, is a logistical issue. It is also a huge passenger hassle. There’s no terminal building to bring the passengers off the packed flight. It’s just an airbase. 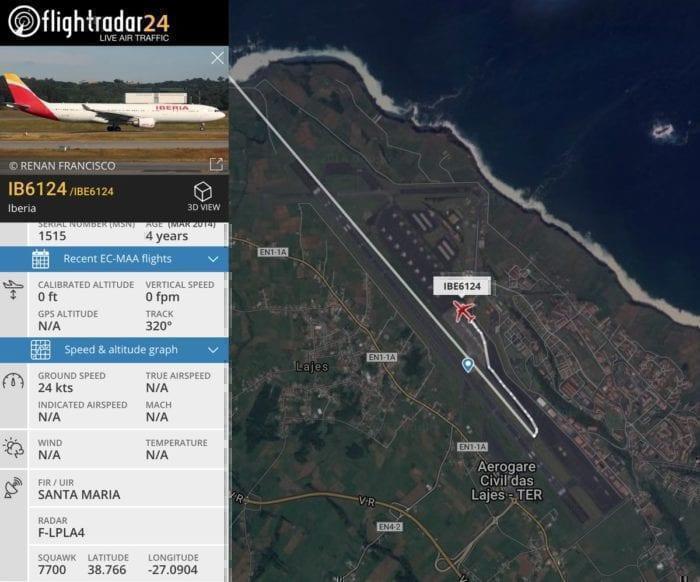 Although we can only speculate on the procedures in place, it’s safe to say, with a smoke code, the plane was evacuated. Essentially, base personnel were woken up at around 3 am their time, to help accommodate the passengers. Most likely, passengers were given shelter and basic refreshments in a mess or hangar space.

After approximately five hours at the base, the Airbus A330 took off again to complete the last stretch of the 1,250 km flight to Madrid. It reached Madrid at 12:59 pm local time, arriving just over 5 hours late.

While the story is a dramatic one, strangely enough, such landings aren’t that rare. Lajes Field accepted an emergency landing from an American Airlines 767 this spring. It also landed an Air Transat flight in 2001 when it sprang a fuel leak over the Atlantic. Let’s just say, Lajes Field must be a welcome sight to many.