Two Years On: The Fall Of Jet Airways

This weekend marked two years since Jet Airways ceased all operations and went into bankruptcy. Once India’s second-largest airline and popular international carrier, the company struggled with growing losses and increasing competition. However, after 18 months on the ground, October 2020 saw a group win the chance to revive the carrier. So let’s find about more about Jet Airways’ history and its future.

Jet Airways was founded in 1993 by travel industry veteran Naresh Goyal. The airline aimed to be a full service carrier and attract lucrative corporate clients and premium cabin travelers. The carrier started with just four leased Boeing 737s (an aircraft that would have a long history with the airline) and became a scheduled airline in 1995, once government restrictions were lifted.

Post-1995, Jet Airways saw rapid growth as the cost of flying came down considerably amid new competition. The Mumbai-based airline placed its first order for 10 737s (four -400s and six -800s) in 1996, kicking off its fleet expansion. In the two years that followed, Jet grew its presence in the domestic market and became a recognizable presence. 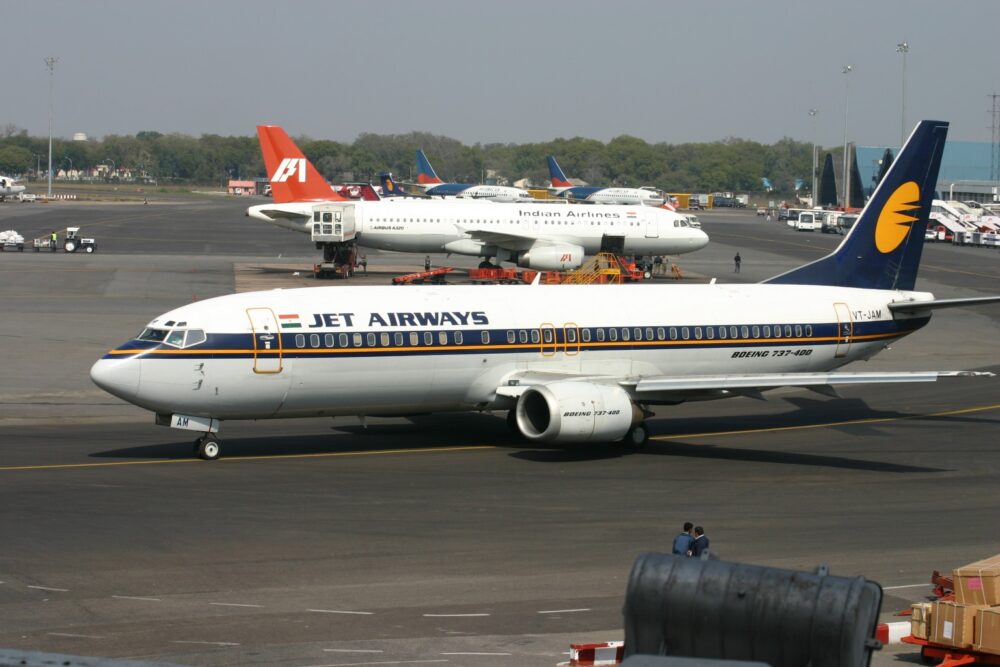 By the early 2000s, Jet Airways had firmly become a major domestic airline and was only second to market leader Indian Airlines. With a fleet of 30 aircraft, a market share of over 20%, and 195 daily flights across India, things only were only looking up for the new airline.

However, the events of 2001 and falling demand meant that Jet would register its first loss since its founding. In 2004, the airline began flying its first international services to South Asia, kicking off with a route from Chennai to Colombo. The next year saw Jet launch its inaugural service to London Heathrow using A340s, a route that would become its signature service for decades to come.

However, the rest of the decade began to pose problems for Jet, ones that would threaten its future.

The troubles for Jet Airways began in 2006, when low-cost carriers like Air Deccan, IndiGo, and SpiceJet first emerged on the scene. While there was no response at first, the low-cost model quickly began competing with the airline’s premium-based philosophy. With lower fares and growing networks, these carriers posed a risk to Jet’s dominant market position.

To counter the rise of budget airlines, Jet purchased Air Sahara in 2007 for nearly $200 million at the time. The move helped stave off competition for a brief period and saw Jet become the biggest airline in India by passengers carried in 2010. However, this did not last for too long and losses continued to grow.

2012 saw an interesting change for the once-booming airline: an investment from Etihad. The Abu Dhabi-based airline invested $379 million in exchange for 24% of Jet Airways. The deal saw both airlines plan to synergize their networks and fleets to better serve passengers to India, the Middle East, and beyond.

By 2012, Jet Airways had established itself as a major international airline and operated a unique fleet of aircraft. While domestic and medium-haul operations were all handled by 737-800s, long-haul flights saw various aircraft in use. The carrier operated a mixed fleet of Airbus A330-200s and -300s for European flights and the Boeing 777-300ER for flights to London, Canada, and other destinations.

However, this strategy of operating several widebody types proved to be challenging and expensive for Jet Airways. By 2014, as losses grew, the airline began selling or leasing its A330s to airlines like Etihad and Turkish Airlines to shore up its finances.

To better its efficiency, Jet Airways heavily invested in the 737 MAX program, ordering a whopping 225 jets, and bought 10 787-9s. However, as we’ll see, these changes came too little, too late for the airline, which was hurtling toward bankruptcy.

By 2017, it was becoming clear that Jet Airways was in trouble. The airline reported hundreds of millions in yearly losses and began scaling back its operations from unprofitable markets. Despite trying to switch to a more efficient fleet, the growing costs also became a major issue for the carrier.

Low-cost airlines had significantly reduced Jet’s domestic presence, while Air India and foreign carriers ate into profitable routes like London and Singapore. In all, the airline needed a major funding boost and reset to succeed.

Despite all the issues, Jet’s loyal corporate clients remained with the airline until the very end and helped them survive the last few years. However, by 2019, all the issues came to a head for Jet Airways.

At the start of 2019, Jet Airways began to see its aircraft repossessed by lessors and most vendors requiring payment before services. This led to some dramatic scenes around the world, including Jet aircraft being blocked by unpaid parties. This forced the airline to scale back its flights significantly, with reduced crew and planes.

On April 17th, 2019, Jet Airways officially grounded all flights and ceased operations until further notice. After 26 years of flying, the carrier had finally gone bankrupt and looked to have little chance of coming back. Or so we thought.

The year after Jet collapsed saw the airline enter bankruptcy court as investors hoped to recover some funds. At the same time, the owners opened up bids for the airline to interested parties. While carriers like Etihad and major companies showed interest at first, nothing was ever formalized. However, 18 months after the collapse and at the height of the pandemic, one group won the chance to revive Jet Airways.

Led by Kalrock Capital and entrepreneur Murari Lal Jalan, this consortium won the bid and will take over Jet Airways. Their plan is currently under review by the bankruptcy court, but the group has indicated that Jet will return as a full-service airline with narrowbodies.

However, the revival is taking longer than anticipated and could drag into the end of 2021 or into 2022. Regardless, the colorful journey of Jet Airways does not seem to be over just yet and this year could mark the second coming of this carrier.

What do you think about Jet Airways? Did you fly with them before 2019? Will they fly once again? Let us know in the comments!