What Happened To Jetstar’s Boeing 717 Fleet?

Jetstar has been around for 15 years. Not many people will remember that the airline started with a fleet of nine Boeing 717-200s. Where those planes came from is an interesting story in itself. Back in the early noughties, Qantas’ then CEO, Geoff Dixon, bought Impulse Airlines and its fleet of Boeing 717-200s. Those planes were later used as the foundation fleet of Jetstar.

Over the next couple of years, Jetstar received a further five Boeing 717-200s. They were VH-YQF, VH-YQG, VH-YQH, VH-YQI, and VH-YQJ. All came to Jetstar from American Airlines via a short spell with Qantas

But within a few years, all the Boeing 717-200s were gone from the Jetstar fleet. The airline looked to the A320 instead. What happened to the Jetstar Boeing 717s?

NJS was an Adelaide based airline operating regular passenger and charter services. It is now known as Cobham Aviation. Cobham is an unusual airline running a variety of aircraft on regular FIFI work, freight charter services, surveillance and reconnaissance work for the Australian Government and flying Boeing 717-200s for Qantas under the QantasLink brand.

NJS and Cobham Aviation has a longstanding contract to operate Boeing 717-200 services for Qantas until 2026. The contract was renewed in 2016 for ten years. It is worth a handy USD$82 million annually and sees Cobham providing pilots, cabin crew, and maintenance services for the fleet of Boeing 717-200s that fly under the QantasLink brand.

Knowing the Boeing 717-200 went to NJS / Cobham over a decade ago, the question remains, have those Jetstar 717-200s since dispersed elsewhere?

Twelve of the planes are still jetting around Australia wearing Qantas’ distinctive red and white livery. They’ve had various tail registration changes over the years, but only three have left Australia. In October 2008, VH-VQB left NJS and went to Hawaiian Airlines where it now flies as N489HA. Two months later, in December 2008, VH-VQA and VH-VQC also went to Hawaiian Airlines where they now fly as N488HA and N490HA respectively.

What the remaining aircraft are doing right now

VH-VQI is now VH-NXN, which flies for QantasLink around Queensland. It is off to Mt Isa this morning. The final Jetstar 717-200 was VH-YQI, now VH-NXO and like all the others, flying under QantasLink colors. It isn’t currently flying, most recently flying between Broome and Singapore in early November 2019.

Twelve of the fifteen original Jetstar 717-200s still fly for the Qantas Group. There are moves afoot to replace both this aircraft type and the Fokker 100 aircraft that Qantas still flies around the place under arrangements with external operators like Cobham Aviation. But the 717-200 has proved a reliable workhorse for Qantas, notably on those long, skinny regional routes. 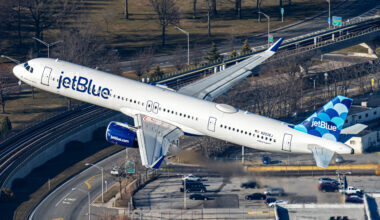