Five Years Ago Korean Air Received Its First Boeing 747-8I

Korean Air took delivery of its first 747-8I with much fanfare. Walter Cho, then Executive Vice President and Chief Marketing Officer and now Chairman and CEO, stated the following at the time of the delivery:

“This new aircraft delivers better fuel economy. That is important to a global airline such as ours. And it supports our goal to build and operate a first-class fleet of world-class aircraft.”

Ray Conner, president and CEO of Boeing Commercial Airplanes at the time stated the following:

“Korean Air has been a valued Boeing customer for more than 40 years and we are honored to celebrate yet another milestone delivery together with their first 747-8 Intercontinental. As one of the few airlines that have operated almost all models of the 747 family, we are excited that Korean Air is extending the tradition with our newest 747-8 Intercontinental. I am confident that the 747-8 will continue to play an important role in Korean Air’s long-term success.”

The registration number for this 747-8I is HL7630. The plane is now in a special livery.

Korean Air first ordered the Boeing 747-8I in December 2009. At the time, the airline ordered five of the type at a list price value of $1.5 billion. Korean was one of the few passenger airlines to purchase the 747-8I.

Then, in 2013, Korean Air expanded its 747-8I order. The airline added five more of the type alongside an order for six Boeing 777-300ERs. The list price of that order was about $3.6 billion at the time, although almost no airlines pay list price for any aircraft with discounts negotiated for orders.

This took the airline’s total order book to 10 for the passenger variant of Boeing’s latest-generation, and now last generation, iconic 747 – also called the Queen of the Skies.

Korean Air outfits the 747-8I with 368 seats in a three-class configuration. On the lower deck, there are six Kosmo Suites 2.0. This is the airline’s upgraded international first class product that is lie-flat and comes with a good amount of privacy thanks to a sliding door. Passengers can watch entertainment on a giant 24″ LCD monitor. There are three seats flush against each side with no seats in the middle (unlike Lufthansa’s first class product).

There are 48 Prestige Suites, which is the airline’s international business class product. These are Apex Suites that offer direct aisle access for all passengers in a 2-2-2 configuration, thanks to a slightly staggered layout that provides a little walkway to the aisle from window seats. 26 of these seats are on the lower deck, with the remaining 22 on the upper deck. These seats are also lie-flat. The LCD monitor for inflight entertainment is 18 inches.

Finally, on the lower deck, there are 314 economy class seats in a standard 3-4-3 configuration for coach. Passengers can access inflight entertainment on an 11.1″ LCD monitor.

One of the most common 747-8 routes is Korean Air’s Atlanta to Seoul hop connecting partner Delta Air Lines‘ largest hub with the airline’s own hub. Other cities that may also see 747-8I services depending on scheduling include Honolulu, Auckland, New York, and some East and Southeast Asian cities like Singapore and Taipei.

South Korea’s government is also going to lease a Boeing 747-8I from Korean Air for VIP transport.

Have you flown on Korean Air’s Boeing 747-8I? What is your impression of the plane? Let us know in the comments! 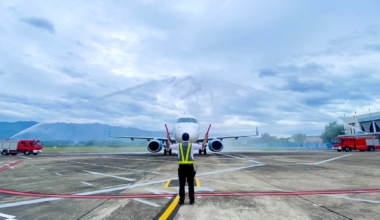 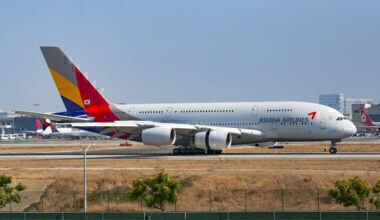 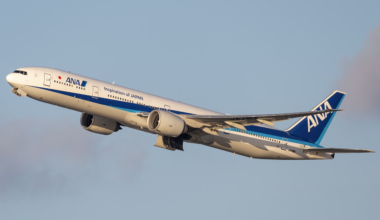 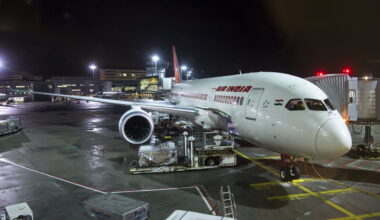