With the news that LATAM would soon be launching a route between Santiago and Frankfurt directly, the writing was on the wall for the short hop they operate in Europe. Currently operating as an extension of the Santiago-Madrid flight, for many years it’s been possible to fly Madrid to Frankfurt on LATAM for very little money – in business class!

Naturally, I filmed the trip for my YouTube channel:

Checkin opens a healthy three hours prior to departure in Madrid’s T4. As a OneWorld Emerald I was allowed FOUR pieces of checked baggage at 23kg each! The ticket is classed as a long haul service for LATAM’s purposes and so attracts an allowance of three pieces in business class, and OneWorld Emeralds are permitted one extra piece. (Don’t worry, I only checked one!) 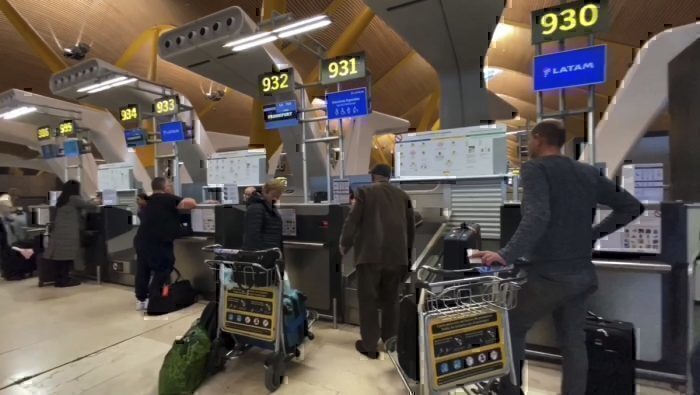 LATAM don’t offer fast track security at Madrid but you can enter the Iberia lounge (LATAM being a OneWorld member until 1st May after which it is leaving). 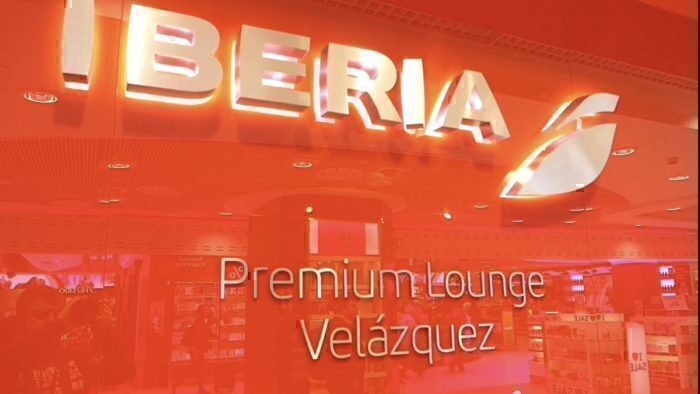 This is one of the better OneWorld business lounges in Europe, with tasteful decor, a good choice of dining options regardless of the time of day (my favourite is the ice cream tubs in summer!), showers and a fine apron view. 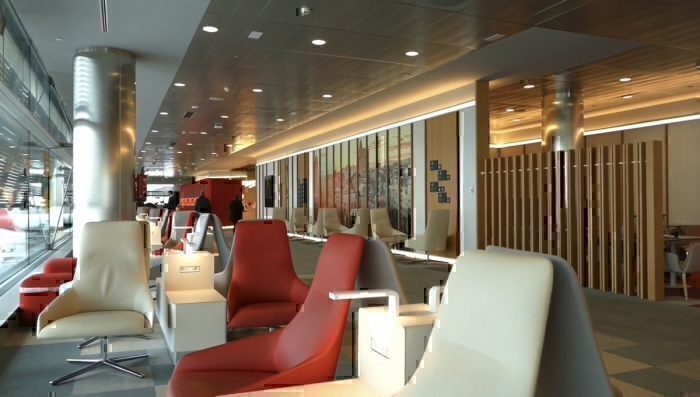 Here’s a peek at the pre-flight dining area used for late evening flights out of Madrid, to save passengers cutting into their sleeping time aboard. 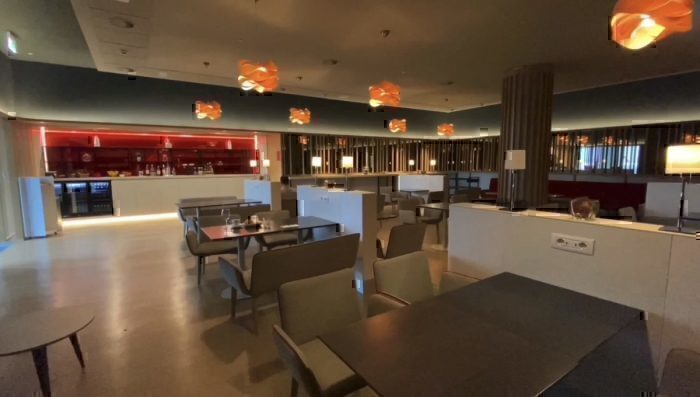 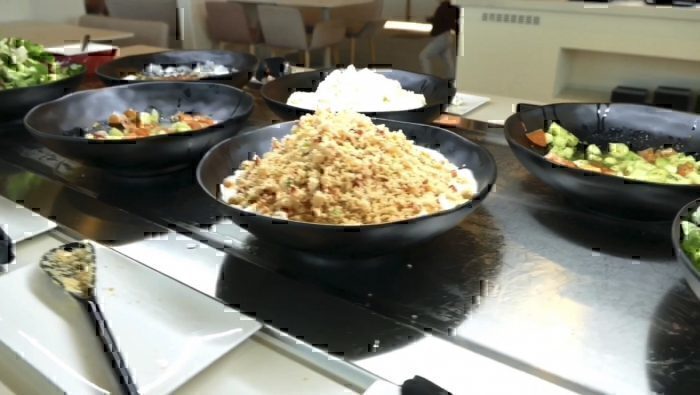 Our aircraft, a 787-9, was still in the old LAN livery – there can’t be many of these still left. The current LATAM livery is much more striking in my opinion, with its bright magenta tones. 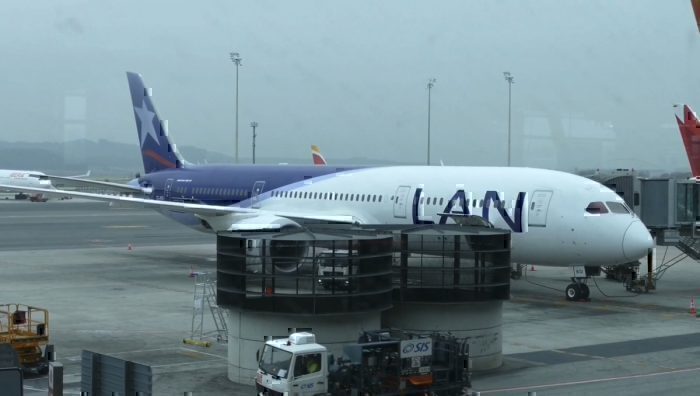 Boarding was hurried after a ten minute wait on the jet bridge and the cabin filled up quickly. There are 30 business class seats in the front section of the aircraft. 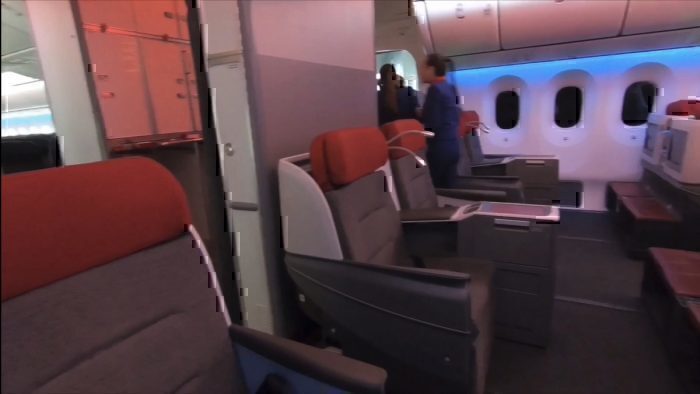 All the seats are lie-flat, although they lack privacy and window seats don’t have direct access to an aisle. 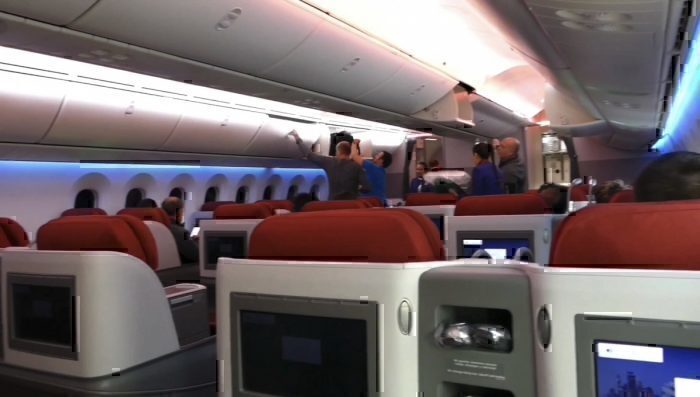 A pre-departure service of nuts and champagne, water or juices was available. Sadly a Pisco sour was not available on the flight – I have enjoyed these several times in the past on this sector and it seems to have been discontinued. Shame, as it’s a wonderful drink from the region. 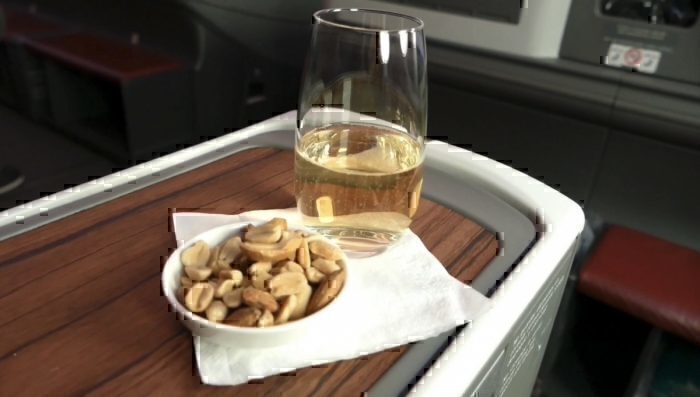 Takeoff was languid; Madrid’s long runways mean many takeoffs, even with wide bodies, use significantly derated thrust. We used most of the runway before gently lifting off. 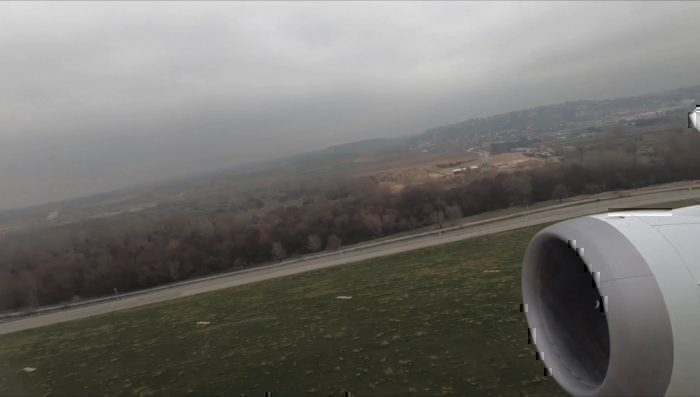 Something I have missed multiple times on this flight until this trip is that the seats do have a small partition, which you can pop up with a button in the console recess. They don’t provide any privacy while seated but give at least an illusion of privacy while reclined in bed mode. 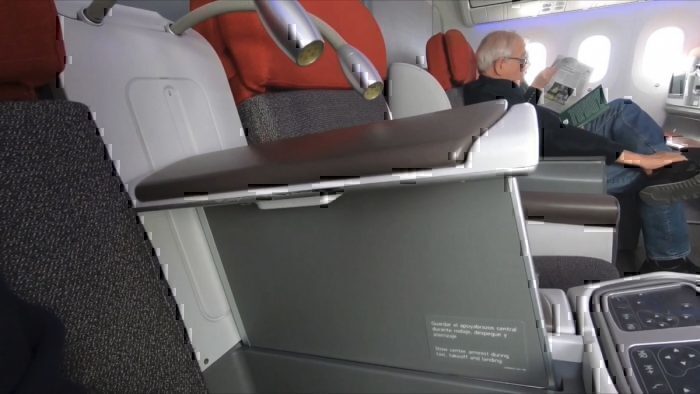 The tables are large and can swivel away to allow you to exit even with food on the table. 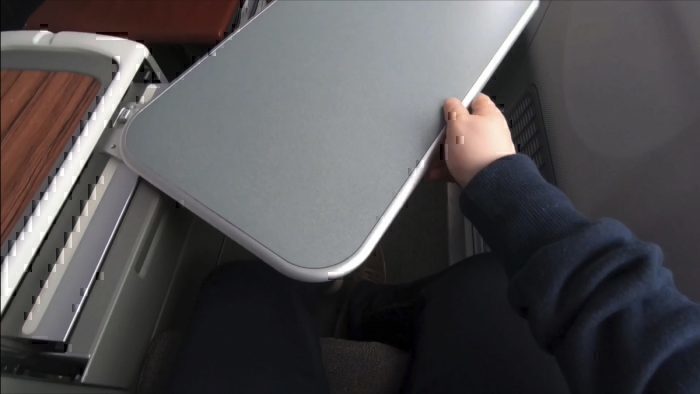 Of course, there are electronic dimming windows on this Dreamliner. I love the middle setting and the fine, relaxing shade of blue it turns everything. 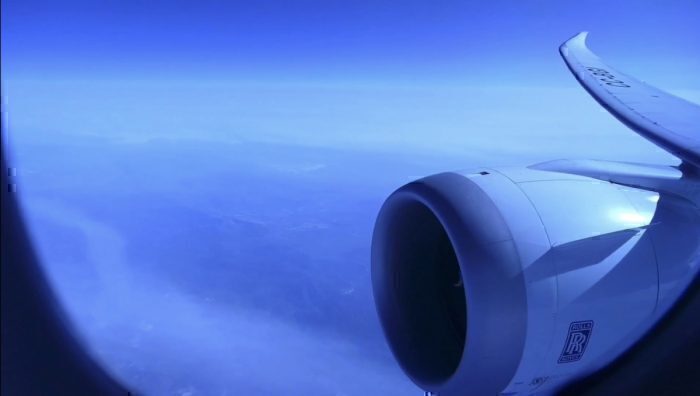 The meal service started about half an hour into the cruise. 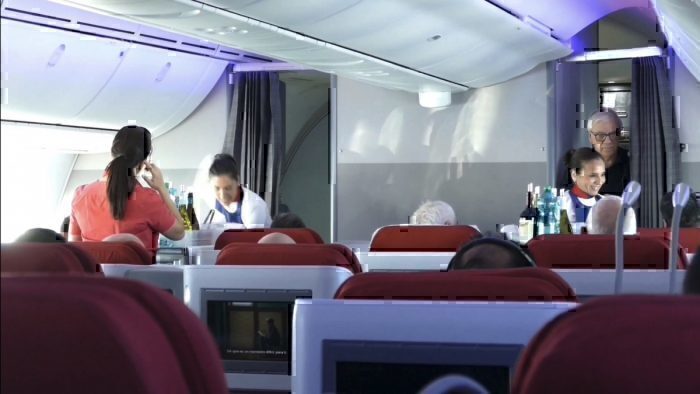 The meal comes on one tray and there is no menu and no choice, but the food is of a high standard. This cold chicken and olive salad was very welcome and perfect for the time of day, with the meal being served at about 3:45pm local time. The dessert was a fruit sponge (mango, I think). Overall a very good standard of meal for a 2 hour Euro-hop. 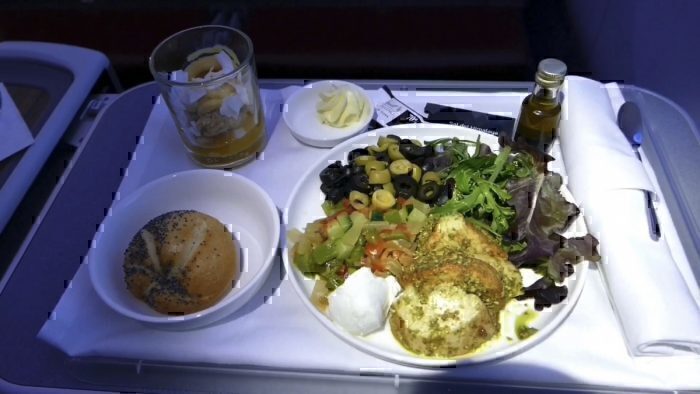 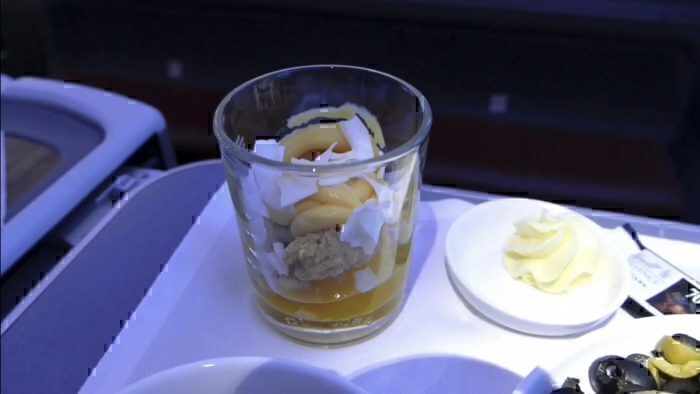 Headphones are also provided which are okay – but I always recommend bringing your own. 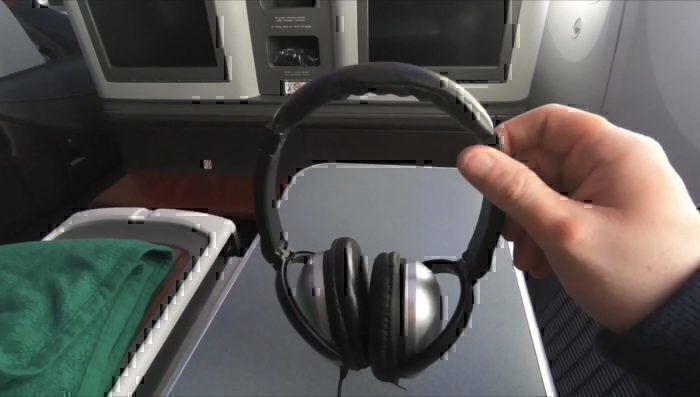 The in flight selection of films and TV shows was very average for a long haul flight, but perfect for a two hour hop – most flights in Europe don’t have any inflight entertainment at all! Judy is a super film and at two hours long you can get through it all on this sector. 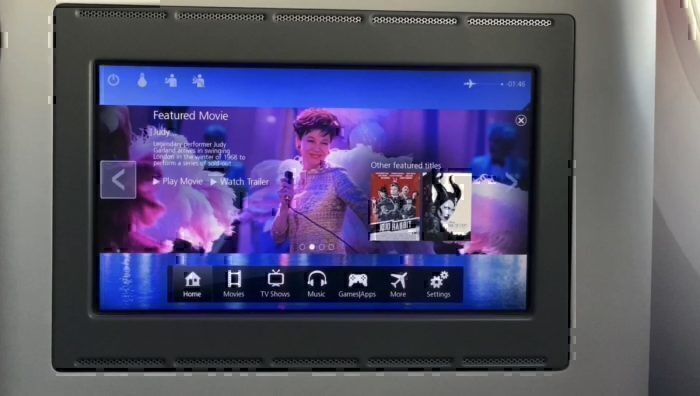 The flight is all too short and within a couple of hours we had Frankfurt Airport in sight as we travelled on the downwind leg to the northerly runway. 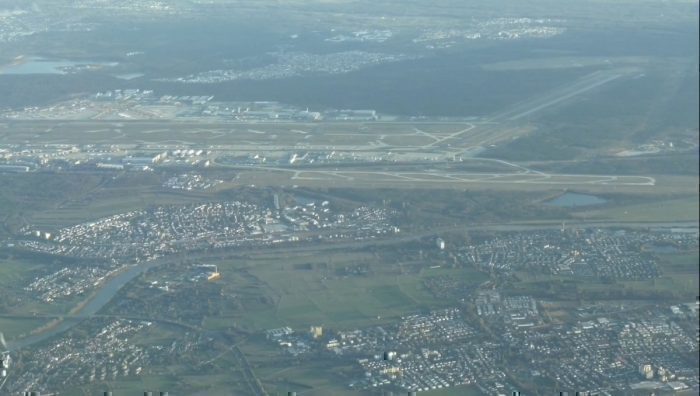 For those who still want to do this flight – and I urge you to do it if you haven’t already – do it soon. The route ceases on 30 June and if you plan on collecting miles in the OneWorld alliance you need to do it before LATAM leaves on 1 May.

The good news is this flight is preposterously cheap. I picked mine up for 68 Euro thanks to a favourable exchange rate, although at the time of writing you need to part with 94 Euro, with some dates being higher. Act fast, and enjoy one of the best value novelty flights in Europe while you can! 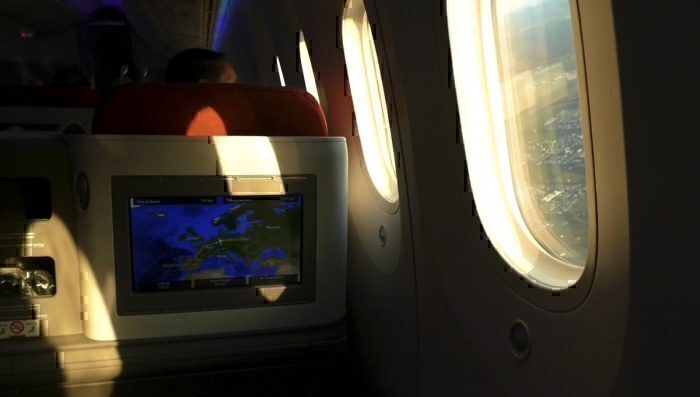