On a recent personal trip of mine, I had the chance to test out Lufthansa’s North Africa economy class offering. These flights are slightly unique as, while they are largely operated by A320 family aircraft, the onboard service is more aligned to longer-haul, widebody operated flights. Here is what one can expect on these distinctive flights.

Since my itinerary started in Dublin, I deplaned my first flight at a little past 21:00 in Frankfurt. Although there was a little delay, I had just over 40 mins to make my way from the Z gates to the B gates in time for boarding.

I made my way to the gates with minutes to spare. Boarding commenced at 21:50, just five minutes past schedule. The boarding area was filled with families and those with reduced mobility. The queues were much more chaotic than what I’ve been used to when flying out of Frankfurt, and the failure of the e-gates didn’t help the situation.

That said, everyone was boarded more or less on time, and I got to my seat at 22:11.

Awaiting for me at my seat was a pillow and a blanket. The pillow was covered in what seemed like a cotton cover and, while not being the firmest nor the plushest, was very much appreciated. The blanket had a bit of a rough, knitted, texture but was nonetheless serviceable and did its part.

My seat, 12A, was in an emergency row. Yet, unlike row 11, the other emergency exit row, row 12 reclines, a much needed amenity on this night flight. Unfortunately for some of my row-mates, they were unable to keep their emergency exit seats because they didn’t speak English or German.

As for the seat itself, it was the standard Lufthansa Group Recaro NEK, which is now accompanied by seats made by Geven. Personally, I don’t find these that bad for flights lasting three hours or less. That being said, they do get a bit hard after a while. As for pitch and legroom, I have the impression that the layout is superior to some European legacy competitors. Admittedly, I was in an emergency row, but I maintain that position for most, if not all, LH group A320s.

Another contributing factor to the perception of spaciousness, was the relatively new interior, recognizable by white overhead compartments versus the older grey ones.  From a design perspective, I do appreciate the Group’s side panels which features small silver dots on short haul aircraft. These dots are slightly refractive and thus, enhance the perception of spaciousness through mirroring and manipulating the light at eye level. I wish more planes had this feature.

We pushed back at 22:22. During our taxi, the crew made a manual safety briefing. We took off at 22:35, with no wait on the apron as we were one of the last flights of the day.

The takeoff was smooth and although this wasn’t an A320neo, I found the engine noise to be minimal compared to the older A321 I flew earlier in the day from Dublin. Indeed, the CFM-powered A320 was is only five years old, compared to its eight year old IAE-engined bigger brother.
Seat-belt signs were switched off at 22:43 and the cabin lights were turned back on at 22:52.

An efficient start of service

As soon as the cabin lights were turned on, the crew started the service. They started by quickly passing by, offering the in-flight shopping magazine.
As the crew prepared I became rather distracted by the most beautiful lighting storm off in the distance. Unfortunately, I couldn’t capture the show on my camera. The sky had a dark blue haze and a few darker clouds which would suddenly be illuminated by bright, explosive-like, bursts of light. It was rather captivating, to say the least.
After serving the (many) special meals, the flight attendants made their way to row 12 at 23:20.

The options were the rather classic chicken or pasta choices. I chose the chicken, which was served in a slightly sweet lemon sauce with rice and green beans. Also on the tray was a bread roll, an indistinguishable salad dish (which I would later identify as potato) lemon cake and some cheese. To drink I had some white wine and sparkling water.

By this time, I was rather hungry as my previous flight from Dublin featured “reduced service” for some strange reason, and my connection time didn’t give me a second to grab a bite.

For those of you who are curious, reduced service meant each passenger was served a muesli bar and a simplified drinks service. No hot drinks were provided; I only had sparkling water. This was rather disappointing because I was really looking forward to a cheese sandwich, and I knew my journey would be a long one.
As for the dish in front of me, while the rice and beans were slightly overcooked, the chicken was quite nice and not too dry. The sauce, although slightly sweet, married well with the rest of the dish. The “salad” though, was not really to my liking. It was way too salty and not particularly appealing.
The wine I had with the meal was quite pleasant, not dry, but with sweet notes of apple and apricot. The wine also went extremely well with the Bavarian “Camembert”, a designation which makes my French want to “râle“. The cheese was unmemorable but certainly not offensive, displaying hints of mushroom flavors as an end-note.
The meal was finished with a spongy lemon cake with a creamy layer. Although I don’t really have a sweet-tooth, the cake was the highlight of the meal. Not overly sweet, very light and flavorful. I finished my meal at 23:50 with a cup of coffee in hand.

A few minutes later, I joined the queue for the lavatories. The queue was rather long and a kind flight attendant invited me to use the business class restroom at the front of the aircraft. The lavatories were clean but offered no particular amenities apart from soap, tissues and paper towels.

Speaking of the crew, they were all pleasant and professional. Most of them seemed to be airline veterans and came across as exceptionally polished during regular service.

That being said, I became extremely thirsty later in the flight, Not wanting to wake my seatmates, I pushed the call button. Five minutes later a crew member passed by, helped others who pushed their call button but for some reason, didn’t come to see me. They even reset the call buttons, turning mine off remotely. A crew member did eventually come around, water in hand and my thirst was finally quenched.

Although I’m not sure if they spoke Arabic, I did hear them serve guests in English German and French.

We started our descent at around 01:45 at which point the lights were turned back on. The crew prepared the cabin for landing in silence, only making an announcement five or so minutes later.

We touched down at 02:08 Frankfurt time, meaning 01:08 local time. Our arrival was thus delayed by 25 minutes, for which the crew apologized during the final announcement.

As I got off the jet-bridge, I saw a few “no photo” signs. Not wanting to start my holidays on a bad foot, I avoided taking any pictures in the terminal.

I got to the passport check queue at 01:22, and was through ten or so minutes later. A long queue formed up behind me though, so i think the passengers at the back of the plane had to wait longer.

Overall, it was a pleasant, rather uneventful, flight. On flights to Morocco, Lufthansa offers a full-service on a short haul aircraft, a novelty in some regards. If price and schedule permit, I wouldn’t hesitate to fly this route again. 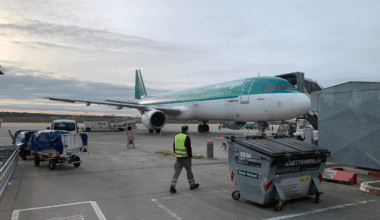 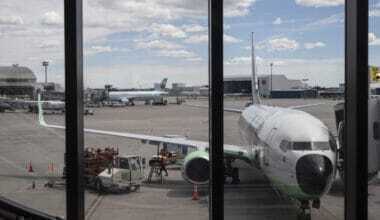 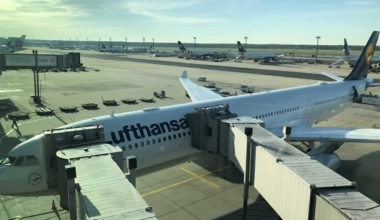 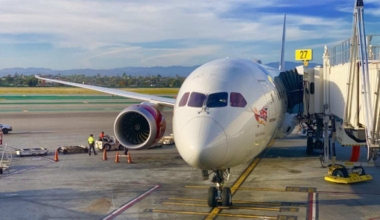 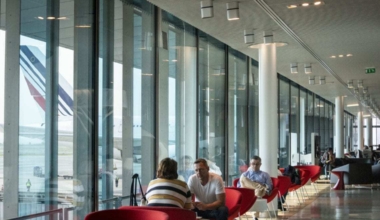 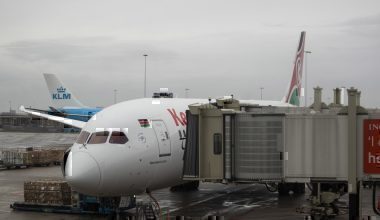