The German Giant: What Were Lufthansa’s Top Airbus A380 Routes?

The A380 has flown nearly 400 million seats across all users since 2011. Lufthansa was its third-largest operator, with its A380 route map seeing 21 routes, 16 airports, and nine countries. The type played a key role in its widebody fleet, but it is unlikely to return to service.

If all A380 operators in the past decade are combined, over 396 million seats have been flown by the type. As you’d expect, it was all about Emirates, with almost half of all capacity (49%), equivalent to 193 million, data from OAG shows. This summer, Emirates has scheduled its A380s to operate 18 routes.

Singapore Airlines was the second-largest operator of A380s in the past 10 years, with Lufthansa the world’s third-largest by this measure. Qantas, Air France, and British Airways round-out the top-six, with this group having more than eight in ten A380 seats.

Lufthansa’s peak year for A380 use was 2016, when it had 3.5 million seats by the aircraft. This isn’t a particularly large amount, and it was equivalent to a 7% share of all A380 seats that year.

In fact, Lufthansa’s share of the type has declined almost yearly – it had 13% in 2011, reduced to just 5% in 2019. This was from the European carrier using the A380 less as the global total of the type still grew. Lufthansa is very unlikely to operate the A380 on commercial services again, although it hasn’t yet officially cut the type. Another aircraft, D-AIMD, left for storage on March 22nd.

Hugely about Frankfurt, but Munich too

Lufthansa used its A380s on 15 scheduled routes in 2018, its most ever, up from eight in 2011 to 2013. Frankfurt was, of course, crucial for the aircraft, although it did shift some to Munich in 2018 over a spat with Fraport about airport charges.

Lufthansa had over one million A380 seats at the Bavarian airport in 2019, helped by more aircraft moving over. Hong Kong was top from Munich, followed by Los Angeles, Beijing, Miami, and San Francisco.

Since 2011, 16 airports and nine countries have seen Lufthansa’s A380s on a scheduled basis. While Asia was key, with seven countries, the USA had nearly 2.5 times more seats than China, the second-largest country. This is reflected in its top-10 A380 routes this decade, which are shown below.

It’s not much of a surprise that Lufthansa’s top-three routes – Singapore, San Francisco, and Houston – all involved Star Alliance hubs. 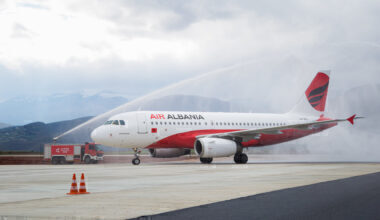