Which Aircraft Did Northwest Fly From Its Memphis Hub?

Memphis was a Northwest hub until 2010, when the Northwest name was officially consigned to the history books. This followed the completion of the merger with Delta. We look back to 2005 to see what aircraft Northwest used from its important and third-largest hub.

The pulldown of Memphis as a hub was especially notable in terms of the number of destinations, frequencies, connectivity, and a growing focus on local rather than transit passengers. It was also reflected in a greater focus on larger aircraft rather than frequency-boosting smaller ones that have been so crucial to US hubs. The Tennessee airport officially lost hub status in 2013.

Yet, it was an important hub for Northwest. As you would expect, in 2005 it was the carrier’s third-largest airport behind Detroit and Minneapolis, although the bigger hubs both had well over double the number of seats. By 2010, following the completion of the merger, it was the fifth-largest airport in Delta’s network, according to data experts Cirium. And by 2014, it had fallen to 20th.

The following figure shows that Northwest Airlines had 6.4 million outbound seats from Memphis in 2005. These were across some 82,000 flights, meaning it had ~225 daily departures from the hub. There were three main banks of arrivals and departures.

Northwest’s route network was comprehensive, with 98 destinations (all but six were domestic). They had an average distance of just 526 miles, even less than with American from Charlotte. Detroit, Minneapolis, Orlando, Los Angeles, and Washington National had the most flights, schedules from Cirium indicate. Detroit and Minneapolis show how hub-to-hub flying was crucial then as it is now, including for widebodies.

A fleeting look back at the year 2005

In this year, Northwest and its regional partners Endeavor Air and Mesaba (operating as Northwest Airlink) used the following aircraft. If all variants are combined, the DC-9 had the most seats, although only marginally ahead of the 50-seat CRJ-200.

Northwest’s average number of seats per flight was just 78. This was the result of six in ten flights being by regional jets (mainly the 50-seat gap-filler) and turboprops. The hub was very much about smaller aircraft, which included the 34-seat Saab 340.

Mesaba Airlines operated the Saab 340 for Northwest Airlink. Mesaba, which ceased operating in 2012, had 79 of them in total. They were keenly used from Memphis and played an important role. They enabled smaller communities to be linked to a hub and served more frequently, enhancing connectivity and usability.

Where did it use the 34-seat Saab?

In 2005, some 17 destinations saw the Saab, with the top-10 shown below. Extremely little separated those in the top-five, with each served about three-daily coinciding with the three main banks. The 17 destinations had an average distance of 242 miles, with Dayton the longest at 460 miles (although it was mainly a CRJ-200 route).

The DC-10 at Memphis

Memphis saw only one widebody in 2005: the DC-10. It was used on Northwest’s sole long-haul route: to the SkyTeam hub of Amsterdam. Operating once-daily, it left Tenneessee at 19:25 (in the busiest bank of departures) and arrived back the following day at 17:05.

Did you fly from Memphis with Northwest? If so, what were your experiences? Let us know by commenting. 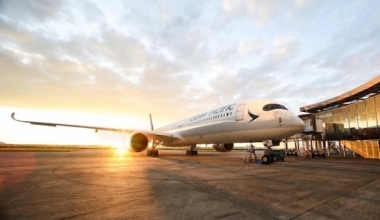