What Is A Milk Run Flight?

The milk run was once a staple of the aviation industry. With aircraft only able to take short flights and used more for moving mail and goods than people, these multi-stop flights were common with many airlines. But, as aircraft became more capable and ground transport more efficient, the milk run has become a rare beast. Still, there are some great ones out there, and any avgeek worth their salt should add at least a couple to their bucket list!

The definition of a milk run flight

The term milk run refers to a flight that stops in several places along a defined route. Much like a bus calls in at several key locations between point A and point B, the milk run flight covers ground in between two points, but with landings along the way.

It got its name thanks to the regional flights that often moved as much cargo as they did people, delivering groceries (including milk, of course) and other essential supplies to disconnected rural communities. You could similarly call them ‘salmon runs,’ ‘medicine runs,’ or anything else, depending on what was being delivered, but it’s the milk run term that’s really captured the essence of these flights. 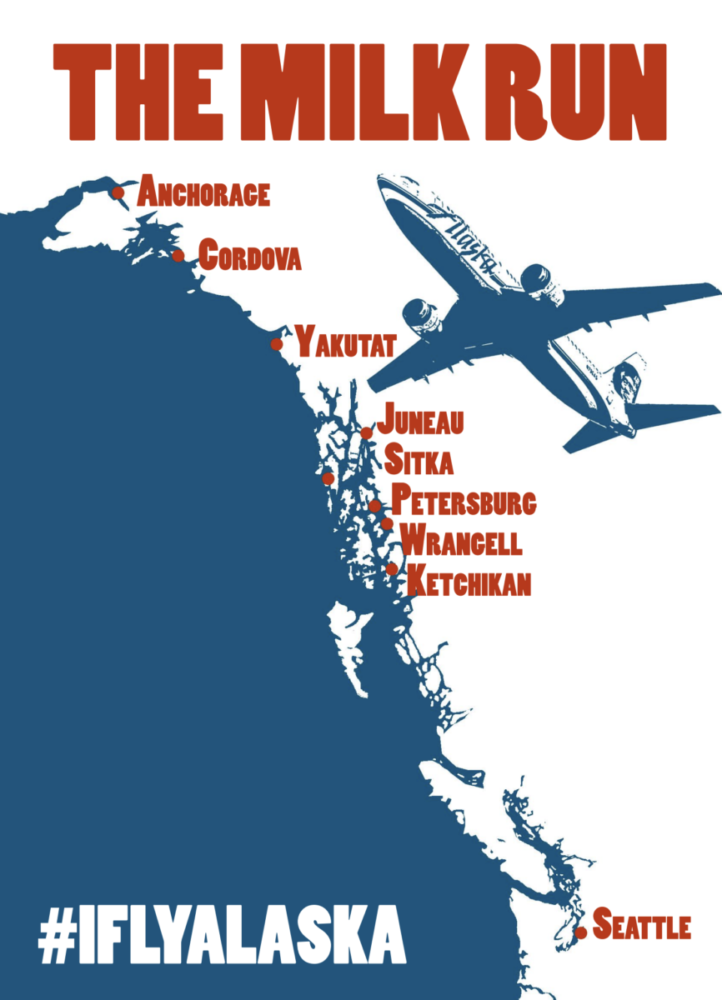 Just as the milkman shuttles from door to door, replenishing essential goods each day, so the milk run flights keep these isolated villages topped up with what they need. Sadly, like the milkman, there aren’t so many milk run flights these days, and those that remain are often less essential than they once were.

Nevertheless, for an avgeek, there’s nothing quite like them.

Widely considered the granddaddy of milk run flights, Alaska Airlines has been operating these types of routes since the 1930s. One such route is flight 65. It begins in Seattle and heads to Anchorage, stopping at various points along the route. Before landing in Anchorage, the flight passes through Ketchikan, Wrangell, Petersburg and Juneau.

There are a number of other milk run routes from Alaska Airlines, spanning flight numbers 61, 62 and 64 through 67. Sadly, the airline no longer uses the 737 Combi for the trip, preferring to deploy a specific cargo aircraft for goods and a passenger jet for people.

AF613 is an Air France milk run flight from Pointe-a-Pitre to Fort-de-France to Cayenne to Miami to Port-au-Prince to Pointe-a-Pitre. An A320 usually operates the route, although due to the current situation, it hasn’t flown the entire run since March.

United Airlines hops around the Pacific Islands, flying from Honolulu to Guam. While there’s usually a daily direct service, the avgeeks might want to hold off for one of the three weekly milk run flights.

The route runs from Honolulu, stopping in Majuro Atoll, Kwajalein Atoll, Kosrae Island, Pohnpei, and Weno Island before arriving in Guam some 15 hours later. The Boeing 777 makes for a comfortable ride, but with a stop of around 40 minutes on each island, it almost doubles the time to take the direct route.

Down under, in the Northern Territory of Australia, a milk run route was revived in 2015 after almost a decade of hiatus. It shuttles passengers between Darwin and Alice Springs, stopping at the towns of Tennant Creek and Katherine on route. Serviced by Airnorth, the route receives government subsidies worth some AU$2.5 million ($1.8m).

African Express also runs a milk run route between Dubai and Nairobi. On the route, the airline stops in Berbera and Mogadishu in Somalia, as well as Wajir, Kenya. It’s a bucket list flight for many avgeeks not just for the excitement of the multi-stop journey, but also because the airline operates one of the industry’s oldest aircraft on the route.

The aircraft are an ex-Alitalia MD-82 and a 46-year-old DC-9-30. Technically, this is two milk runs in one, because the MD-82 operates Mogadishu-Berbera-Dubai and back, while the DC-9 flies Nairobi – Mogadishu – Wajir – Nairobi. Aviation blogger Sam Chui took this flight in 2014, and it sounds pretty darn cool.

Finally, there’s an interesting routing in northern Europe, which can be enjoyed through regional operator Widerøe. Its ‘Explore Norway’ flight pass allows unlimited travel on its entire network, some of which is operated as a milk run with the same aircraft. Check out our review of this here.

Could the milk run make a comeback?

While some milk run routes will always remain, such as Alaska Airlines’ service, many others have since disappeared. Improved connectivity by road, rail and sea has rendered many milk run flights unnecessary.

However, in some parts of the world, the idea of a milk run is as relevant today as it was 50 years ago. Indeed, there have been some mentions of potential new milk run flights starting up, mostly in remote locations.

Caribbean Airlines, the flag carrier of Trinidad and Tobago, was planning to ramp up services from San Juan in Puerto Rico, with a new daily island hopper service. It applied for permission in April this year, and although crisis may have put the brakes on this plan, for now, it’s likely to be back on the cards later in the year.

These should have started in August, but things are still a bit disrupted right now. The flights would have operated as fifth freedom, allowing passengers to embark and disembark at any of the stopping points along the route. Essentially, it’s a milk run service, which we can’t wait to see begin.

The current crisis is seeing a number of new routes being formed that could be classed as ‘milk runs,’ sort of. Also known as tag flights, they had become popular with US airlines who were keen to stay within the network requirements of the CARES Act but needed to consolidate flights due to low travel demand.

Alaska Airlines began flying Seattle to Dallas to Houston, Seattle to Minneapolis St. Paul to John Glenn Airport in Columbus, Ohio, as well as a number of other tag routings back in late April. This was followed by a slew of announcements of tag flights by United Airlines, and a handful from New York-based JetBlue.

With the CARES Act coming to an end at the end of this month, these strange routings are likely to disappear. But, to be frank, they were never true milk run flights, although still popular with the avgeek crowd.

Have you been on any milk run flights? Are there any you want to take? Let us know in the comments as usual.