He’s started up or been involved with more than six airlines to date, and now David Neeleman is at it again. The as yet unnamed airline, colloquially known as ‘Moxy’, has placed a huge order for A220 aircraft and could be the first to take them long haul. Here’s what we know so far.

With a CV that includes starting up JetBlue, WestJet and Azul, not to mention having a hand in turning around TAP Air Portugal, David Neeleman is the living epitome of a serial aviation entrepreneur. That puts him in a great position to launch what might be his riskiest venture yet – the airline known only as ‘Moxy’.

So far, Neeleman has been fairly unspecific about the focus of his new airline. However, judging by recent comments, it’s clear that he is thinking about a point to point model for Moxy far more than a hub and spoke strategy:

“There are a lot of cities where, if you don’t go through the hub, then you know you can’t get there nonstop. So there is an opportunity to get people there twice as fast at half the price.”

Speaking to Skift, Neeleman said that Moxy will fly hundreds of routes, most of which don’t currently have a nonstop connection. He went so far as to say:

“I doubt we’ll have a single route that has any competition,”

By avoiding competitive routes, Neeleman is clearly looking to sidestep the inevitable onslaught from competitor airlines. But that doesn’t mean he won’t be setting his sights on the transatlantic market, just maybe from a different perspective than most.

Transatlantic with an A220

Speaking about the A220, Neeleman has stated that they bought a plane with ‘maximum flexibility’. He says the new airline appreciates how it can fly short haul just as capably as long haul and will land at airports with super short or super long runways just as well.

The range of the A220 certainly opens up some interesting markets around the world. With up to nine hours flying time, transatlantic trips are well within the reach of this compact bird, as well as routes taking in Central and South America, the Hawaiian Islands and more.

While flying a single aisle jet long haul may not appear to most, the A220 offers some unique opportunities; opportunities that Neeleman is keen to capitalize on. Commenting to Conde Nast Traveler, he said:

“We want to be able to have a premium cabin. With the plane, I could do a domestic first class, I could an international lie-flat product. I could switch things out season to season.”

We’ve already speculated that an all business transatlantic service could work; will Moxy be the one to bring it to the masses?

Could Moxy beat JetBlue to Europe?

After months and years of speculation, JetBlue finally confirmed they would be launching flights to Europe in 2021. Although everyone is certainly excited about this news, 2021 is still a long way away. The vagueness of their announcement, with no confirmed airports, products or frequencies mentioned, makes it almost non-news at this stage.

With David Neeleman’s new airline starting to take shape, one has to wonder, could they beat JetBlue to Europe and really upset the applecart? I can almost see the headlines now – ‘JetBlue are beaten by their founder’; ‘Founder of JetBlue beats JetBlue’… you get the idea.

Although Neeleman remains tight lipped about where and when Moxy will fly, it’s clear that he wants to maintain the option to go transatlantic, even if it’s not immediately at launch. If Moxy were to beat JetBlue to Europe, it would be a PR win for Neeleman. Either way, the next couple of years are going to be very interesting to watch. 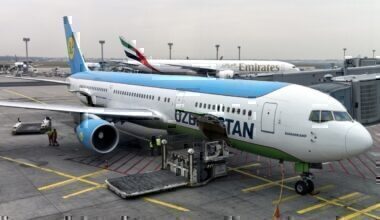