A Nordwind Airlines Airbus A321 suffered significant damage landing in Antalya earlier today. The incident happened when the aircraft landed following a flight from Moscow. Photos show that the aircraft appeared to have a very hard landing on arrival in the Turkish city.

Have you ever seen the top of the nosegear of an Airbus A321? Unfortunately, the occupants of N41801 this morning did discover what this looks like. The aircraft looks to have a made a particularly hard landing as the nose landing gear punctured up through the cabin floor. The details of the incident are still unfolding as can be the case after such incidents.

Nordwind Airlines flight N4 1801 operated today from Moscow’s Sheremetyevo International Airport. Nordwind Airlines operates the flight from Moscow to Antalya with a fairly irregular schedule. However, the flight typically departs at 02:50 according to data from FlightRadar24.com. The operation of the flight is shared between Airbus A320 family and Boeing 777 aircraft.

Today the flight was operated by an Airbus A321. The aircraft is registered as VQ-BRS according to Airport Haber, who first reported the incident. Simple Flying understands that nobody was injured in the incident earlier this morning.

According to data from Planespotters.net, the aircraft involved in today’s hard landing is fairly young. VQ-BRS is a 2.7-year-old Airbus A321-200. The aircraft’s first flight took place on the 9th of May 2017. It was delivered to Nordwind Airlines just nine days later. The Airbus A321 has an all-economy layout with 220 seats installed.

Earlier today, the aircraft appears to have made a significantly hard landing in Turkey. Photos of the incident show that the Airbus A321’s nose gear tires have burst, however, that is the least of the aircraft’s troubles. The nose gear didn’t collapse during the landing. Instead, the aircraft buckled around it. As such, significant deformities can be seen in the aircraft’s skin in the affected area.

However, the most significant damage was seen inside the cabin. The nose gear punctured through the cabin floor’s honeycomb structure and was seen poking through. Last August a Delta Air Lines Boeing 757’s fuselage was damaged during a hard landing in Ponta Delgada. Some thought it was the end of the road fort the aircraft. However, Delta repaired the aircraft and it re-entered service late last year.

Who is Nordwind Airlines?

Nordwind Airlines was founded in 2008. The airline was initially launched with Boeing 757s, and is based out of Moscow. The airline now has 32 aircraft in its fleet, a mix of short and long haul Boeings and Airbuses.

Simple Flying contacted Nordwind Airlines for comment, however, had not heard back at the time of writing.

Did you witness the incident? Let us know what you saw in the comments below! 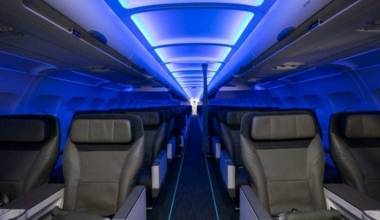 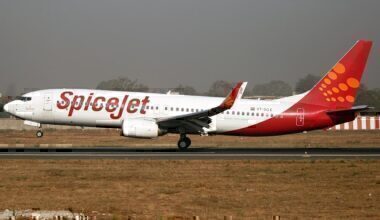 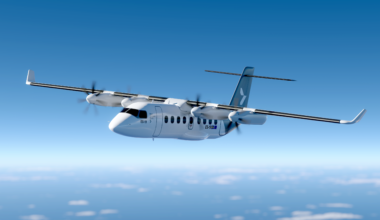