Oman Air Looks To Transform Itself

On the third of September 2019, Oman Air CEO Abdulaziz Al Raisi announced a major company-wide transformation plan, in front of 500 employees. Although few specifics were offered to the general public, a dive into the company’s history, past, and present, challenges may be telling of things to come.

History and structure of Oman Air

Oman Air is the flag carrier of the Sultanate of Oman. Since 1993, the 99% government-owned airline has connected the Sultanate destinations throughout the region through its hub, Muscat.

In 2007. the Government of Oman dis-invested from Gulf Air and recapitalized Oman Air. That same year, the Muscat based carrier launched flights to London Gatwick, moving UK operations to London Heathrow less than two years later.

Later in 2009, the carrier took delivery of its first Airbus A330 and launched new services to Western Europe and South-East Asia. According to the airline’s website, the company was the first airline in the world to offer inflight phone and WiFi connectivity on its aircraft in 2010.

Today, the award-winning airline operates a 55-unit strong mixed Airbus, Boeing, and Embraer fleet to more than 50 destinations around the globe.

Although the company has seen significant growth since its inception, the road to said growth has not been flawless. Chiefly, the airline has yet to make a profit. Though the airline is state-owned and only has one shareholder, the carrier does provide annual reports as a governance best-practice.

Indeed, the carrier operates in a challenging trading environment. Not only does the airline have to compete with regional aviation giants such as Emirates, Etihad and Qatar, but must also do so while trading in one of the highest valued currencies in the world (1 OMR = 2.6 USD).

Adding to the company’s financial woes, the carrier has also been severely impacted by the 737 MAX groundings.

According to Reuters, the groundings have curtailed the airline’s 2019 growth strategy and have led to revenue and market-share losses for the airline.

“If I don’t hear back from Boeing before I arrive at Le Bourget Airport, then I will have to go ahead with my planned business lunch with Airbus at the airshow,”- Oman Air CEO Abulaziz Al Raisi – Reuters.

Given the challenges facing the airline, Oman Air’s transformation plan is set to touch on fleet harmonization, organization structure, and digital transformation.

While one can only speculate, the airline could feasibly become an all-Boeing carrier. Indeed, the company has a backlog of seven 737 MAXs from the American manufacturer and no other aircraft on order.

That said, however, the company has previously expressed its displeasure with Boeing over the MAX product, and rumors have indicated that the company could acquire Airbus A350s.

In terms of organizational restructuring, the company’s cargo, catering, engineering and holiday subsidiaries could possibly be reshuffled.

Though much is uncertain, one thing is for sure, the national airline of the Sultanate will try to transform itself to best serve Oman. Especially, as the country revolutionizes itself under Vision 2040 and diversifies its economy.

What do you think the future has in store for Oman Air? Will the company overcome tough trading environments and regional instability? Will the company’s transformation be as complete as the press releases could suggest? Do you think privatization is a possibility? Let us know in the comments. 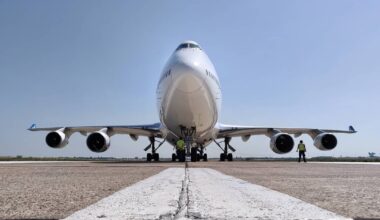