Welcome back to another trip report! In this review, I’ll continue my series of travels from late 2019 (pre-COVID!) around Australia and beyond. Qantas’ business class aboard its A330-200 provides the setting for today’s review, travelling from Sydney to Denpasar, Bali.

My video report can be found at my YouTube channel:

My day started with a 737 connection from Auckland, which gave me a few hours’ rest in Qantas’ business lounge in Sydney. There’s not much to write home about here, as I already covered the main aspects of the lounge in my Fiji Airways A350 report – but there are some fine shower suites which are available on a walk-up basis. 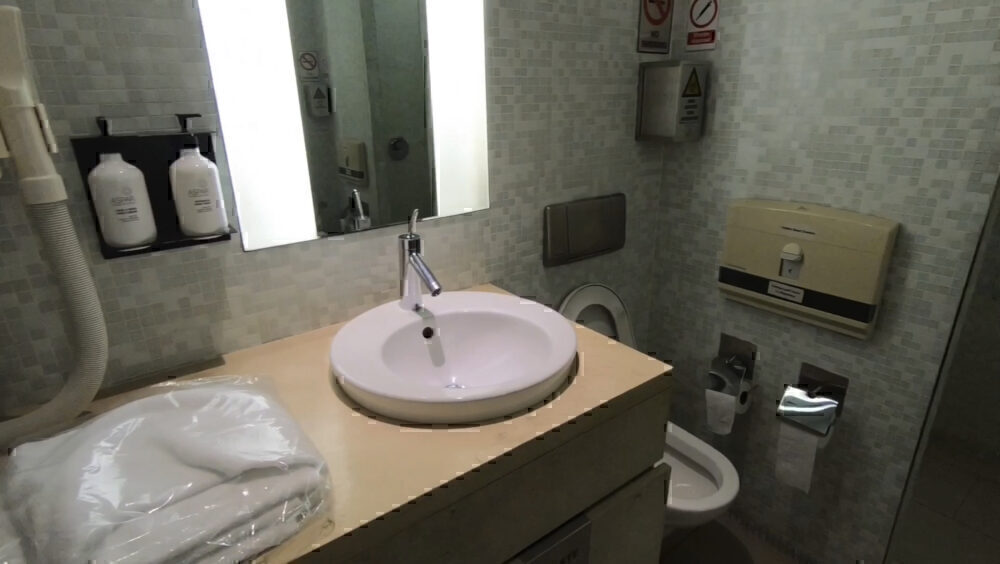 Qantas uses its A330s on selected domestic routes and also on some second-tier international routes which do not command the attention of an A380 or 787. It’s the ideal aircraft to carry us six hours and twenty minutes to Denpasar. 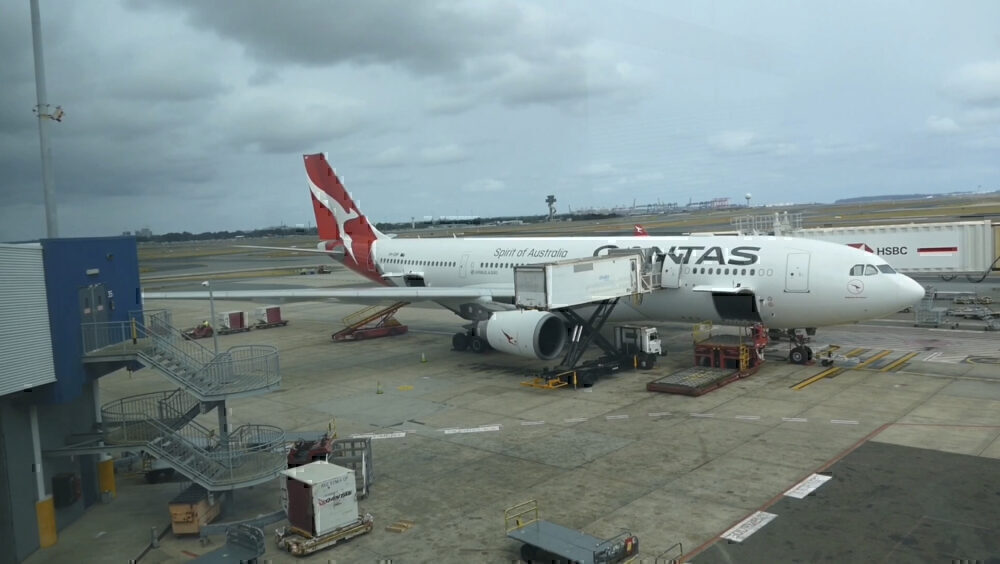 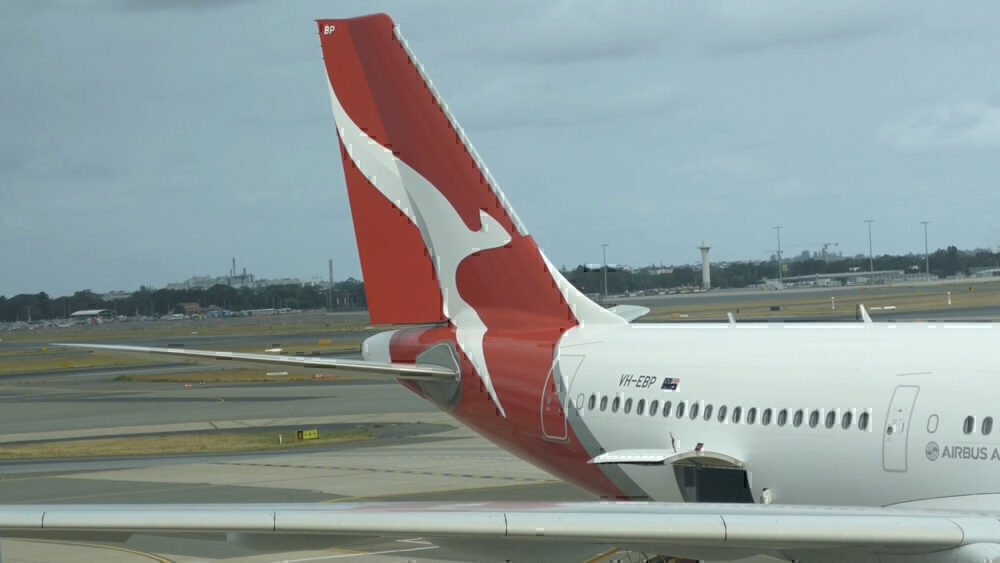 Boarding was prompt, and as a business class passenger I was able to board with Group 1. 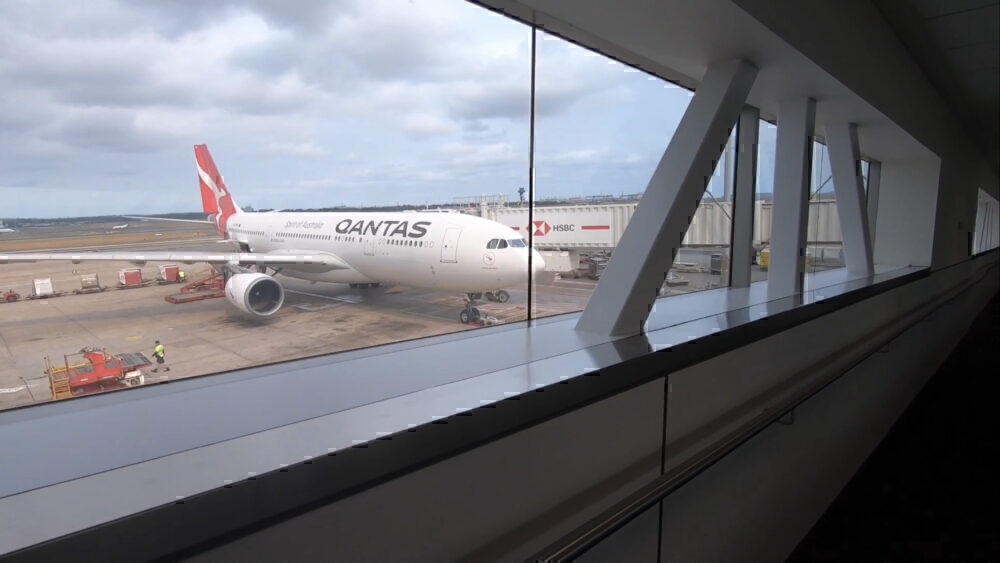 Qantas has 19 business class seats in the front cabin on this aircraft: VH-EBP. A further eight are to be found in a second cabin behind the boarding door. Some aircraft have a slightly denser arrangement with 28 seats in total, plus 243 economy ones down the back. VH-EBP has just 224 economy seats. 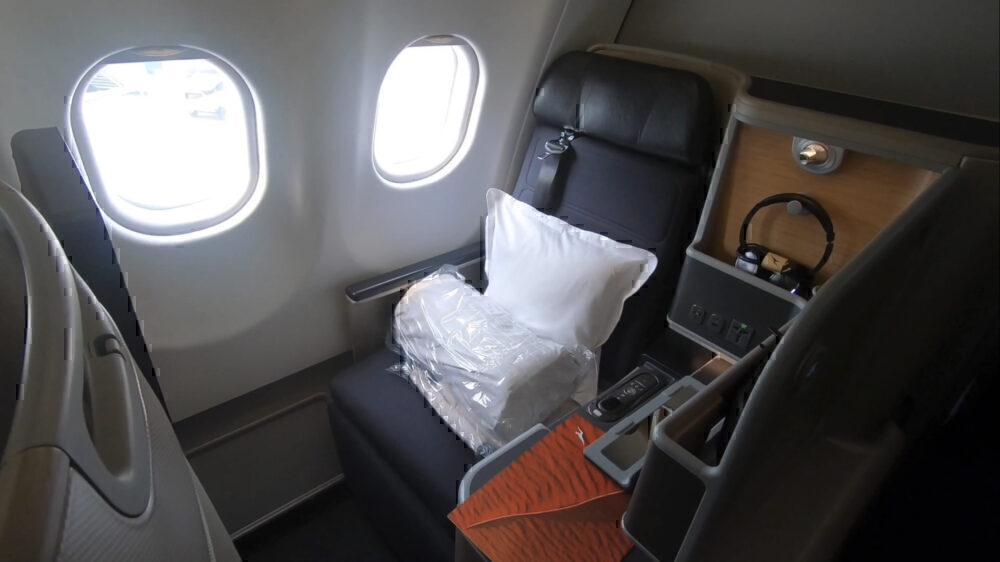 These are Thompson Vantage XL seats, which are a good mid-market choice of seat for long haul business class, and certainly more than welcome on a 6 hour day flight to Bali. The 1-2-1 configuration is staggered, so beware of odd numbered rows in the first cabin, as these “window” seats aren’t quite by the window! 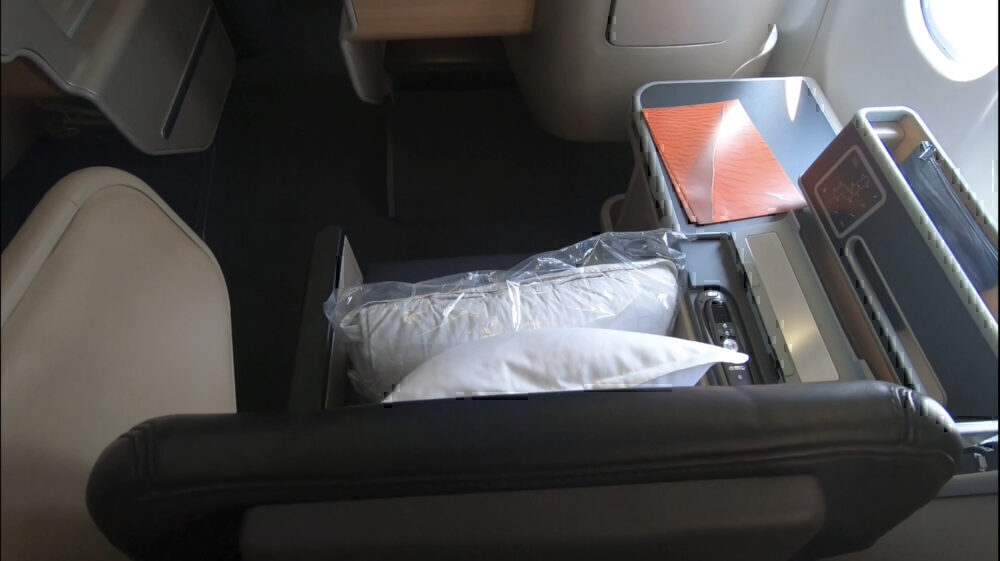 Unfortunately, after starting our taxi, one of the onboard flight computers failed, which meant a return to stand and a one hour delay. 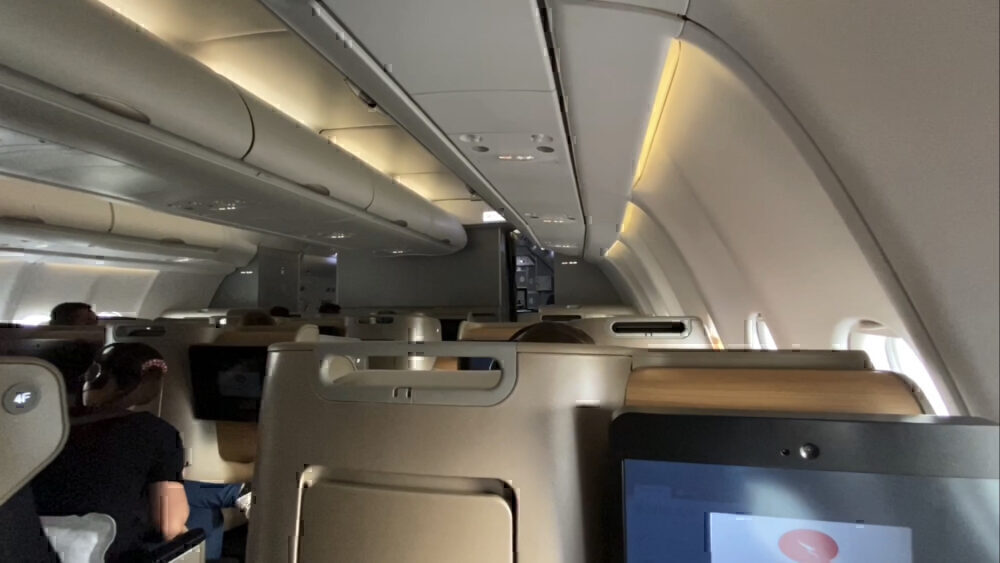 We were well looked after with drinks and snacks while the necessary paperwork was completed and the fault resolved. 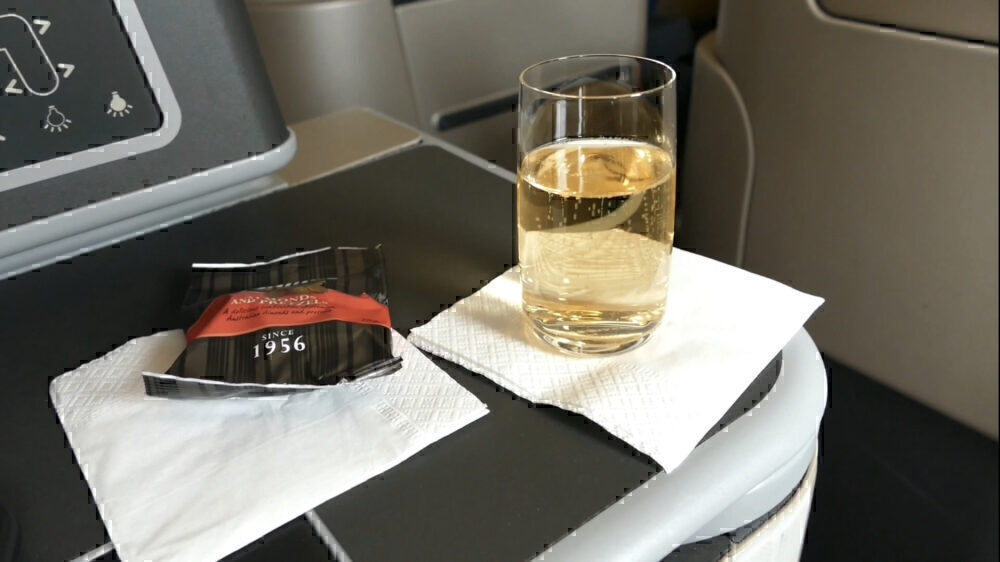 Takeoff was smooth into the evening Sydney skies, which were beginning to recover their blue hue after serious bush fires earlier in the month turned them orange. 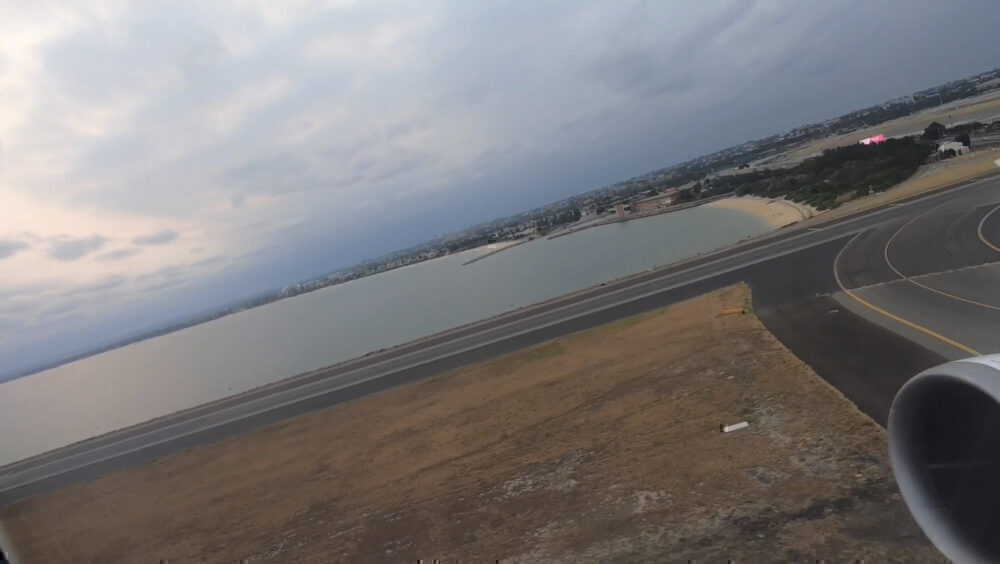 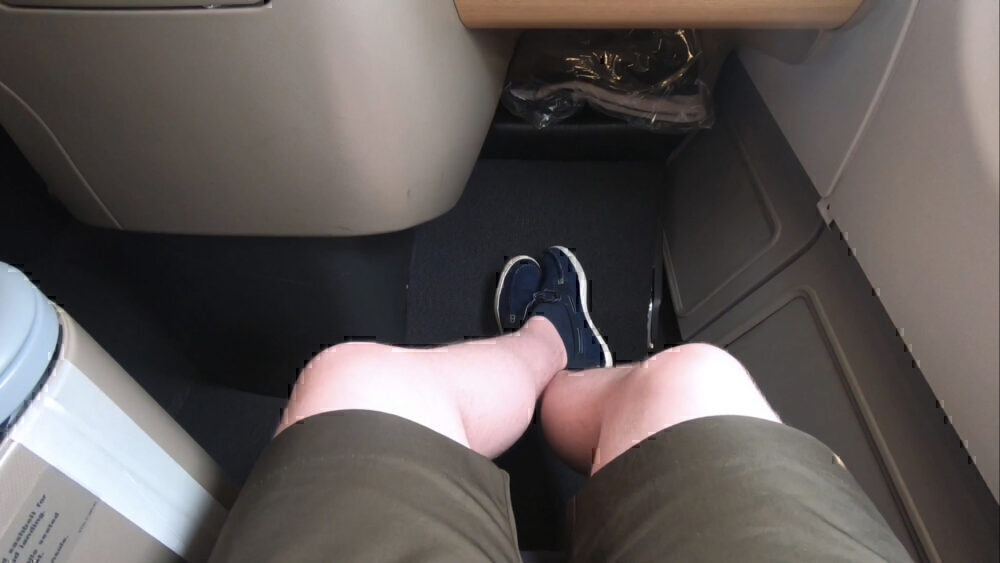 Each seat comes with a 10-inch screen housing a Panasonic eX3 IFE system. 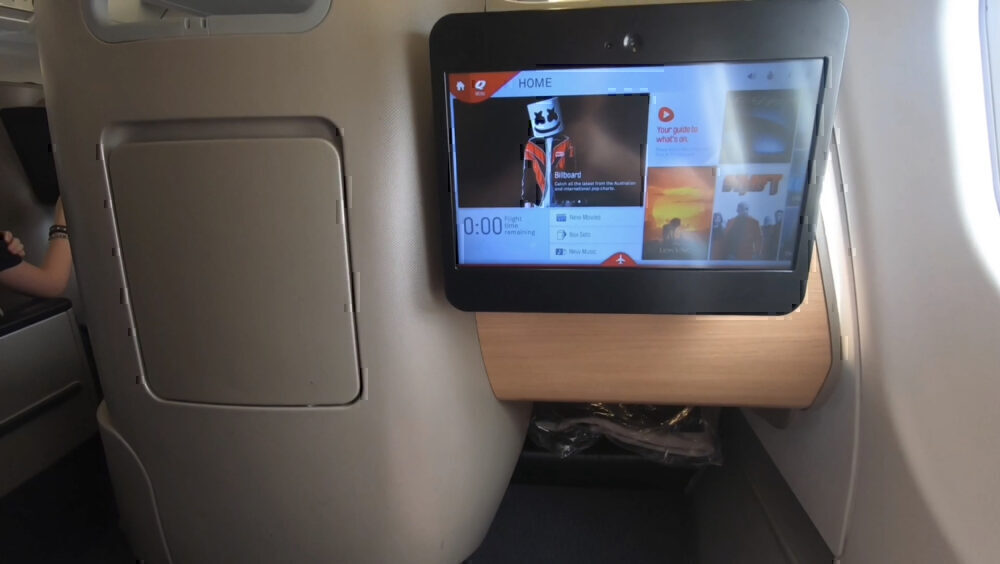 The seat controls account for preset positions (the Z-position recline is excellent), but each function of the seat can be moved independently to suit individual preferences. 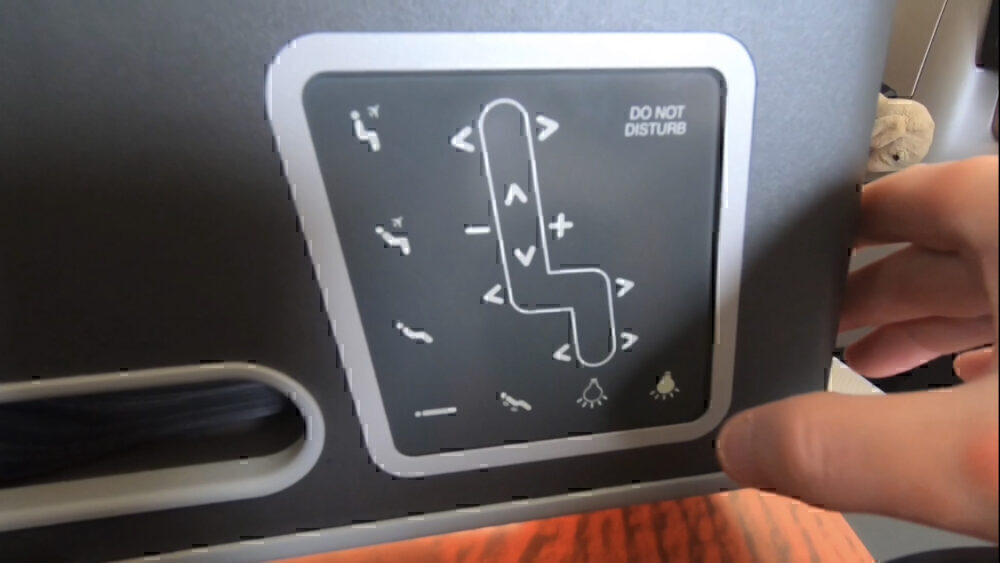 The seat houses a side trough which contains storage space, a bottle of water and some branded noise cancelling headphones, which worked fine. 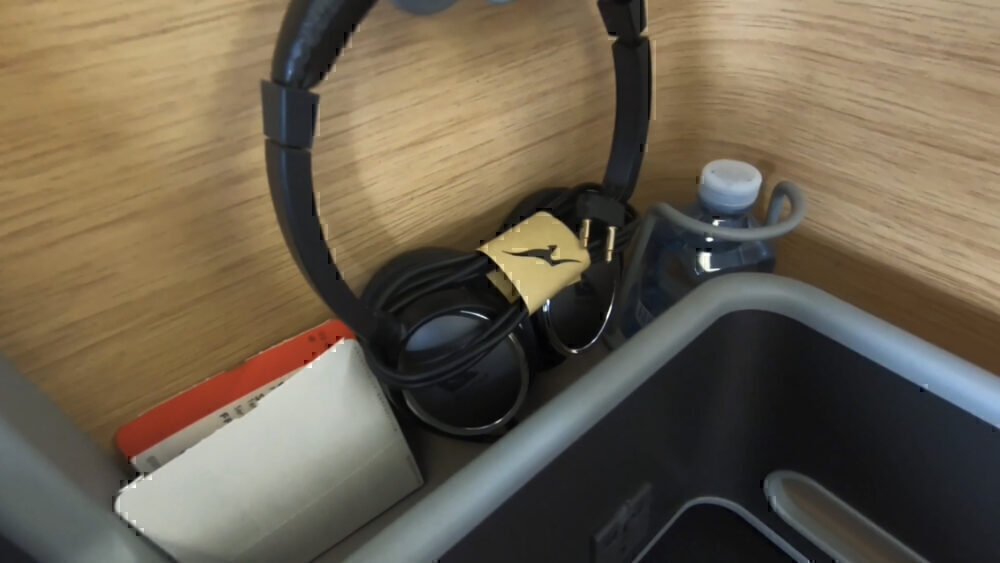 The headphone jack, USB power socket and universal port are below this area. 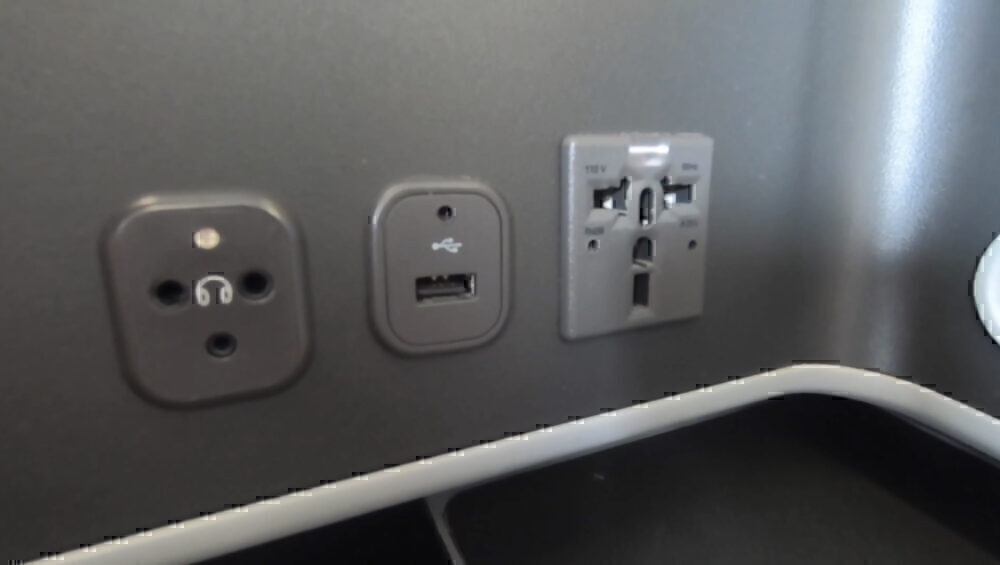 The side console also contains a mirrored panel which opens to release the remote control which can be used to control the IFE screen. 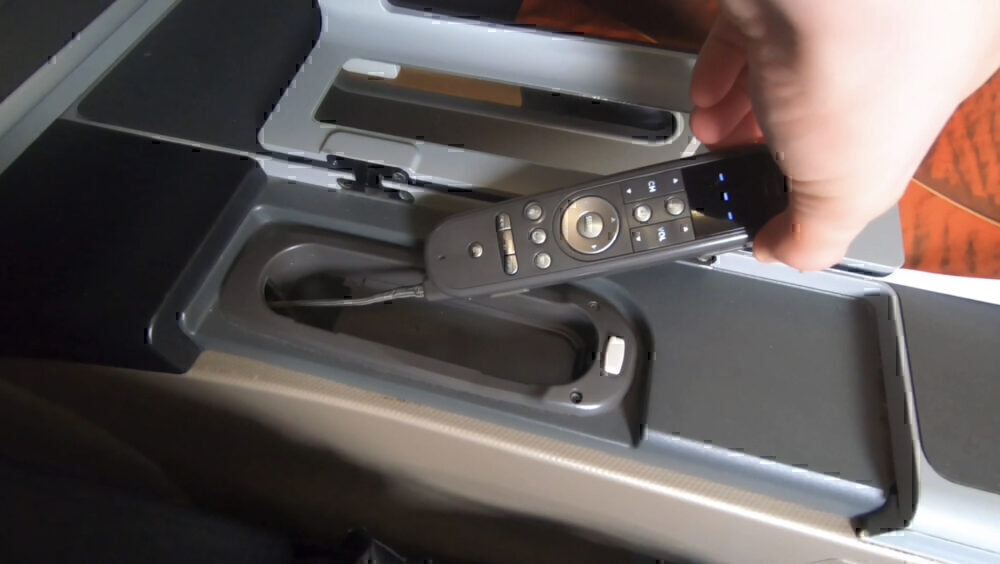 Be warned that these “true” window seats are accessed via a narrow gap – if you are particularly large or clumsy, you might want to pick another one. It’s easy to see in this picture where people have scuffed and scraped the fittings! 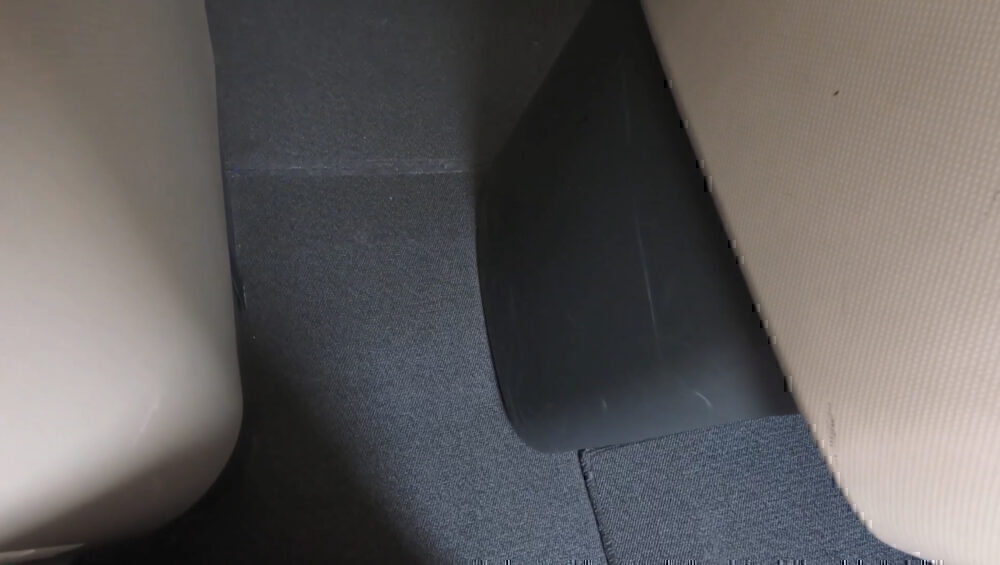 The table deploys from the console and can be pushed away and towards you, but cannot be moved to a position where you can exit the seat while the table still has crockery on it, unfortunately. 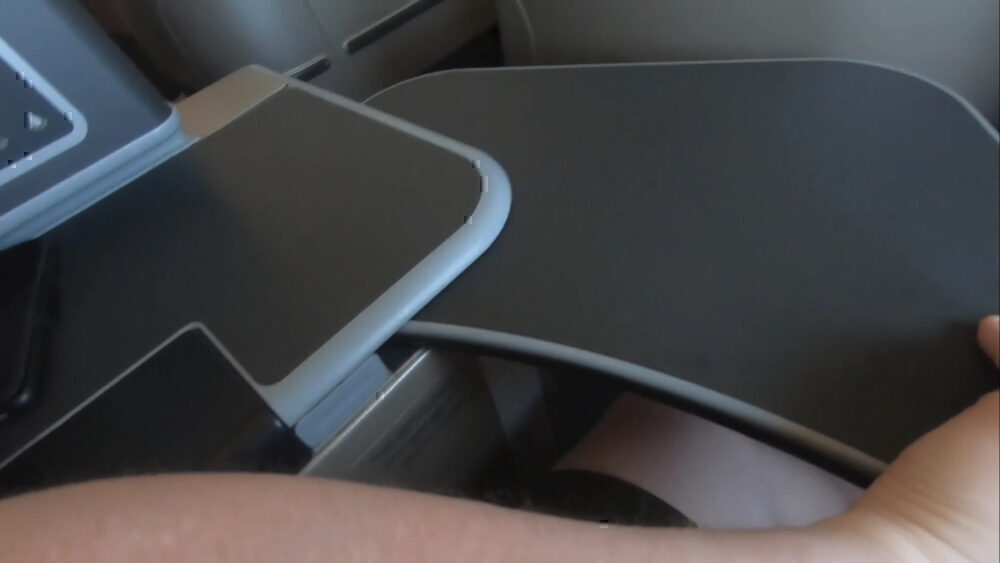 This particular airframe was showing its age – a closer inspection revealed some worn carpets and scuffed trims. 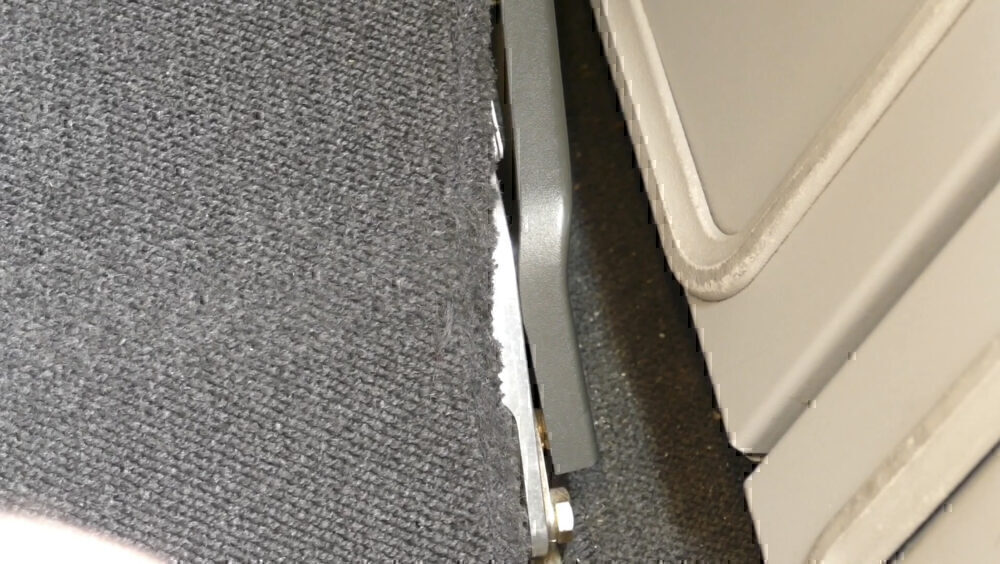 Qantas supplies an amenity kit on this short route, which is in a functional, sheer blue bag. 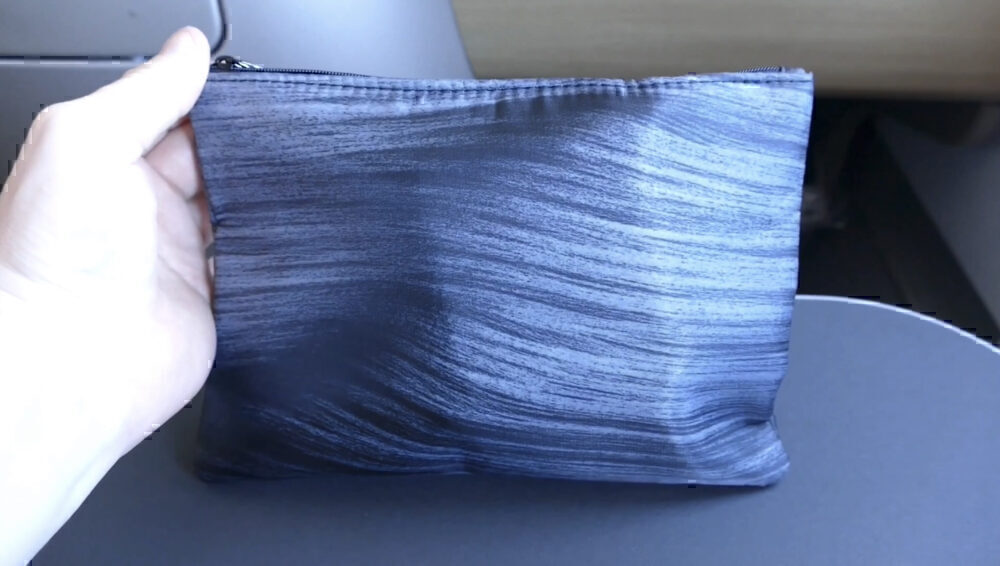 This is quite a reasonable selection of amenities for a 6 hour day flight. The only items I used were the toothpaste and toothbrush. 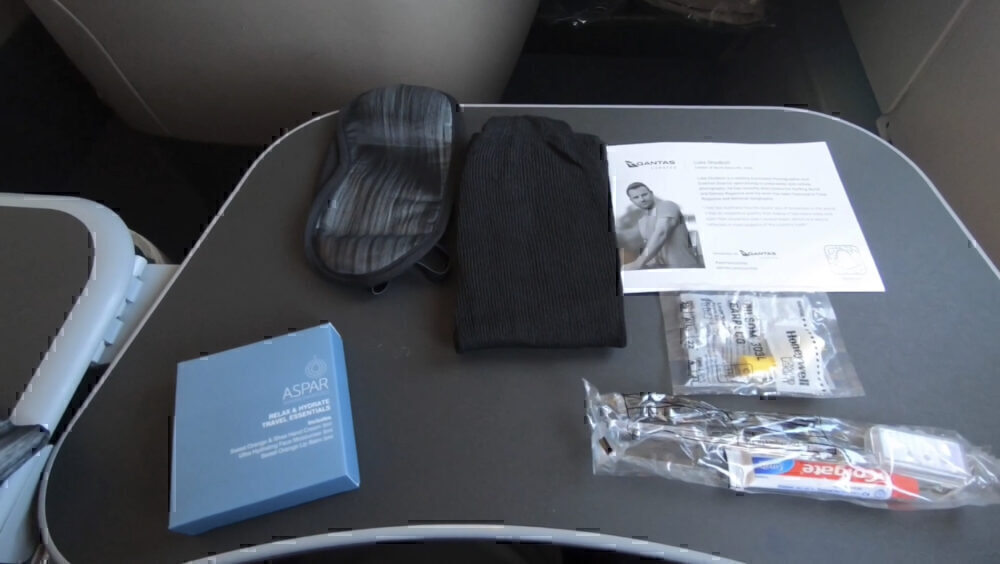 The food onboard was excellent. This was my third Qantas flight and having flown with the airline in economy and in business, I was not disappointed by the food quality at any time. An impressive four choices for both main and dessert on what I’d consider a shorter, second-tier, leisure route was eye-catching in itself.

My starter was a chicken salad with a black vinegar dressing. 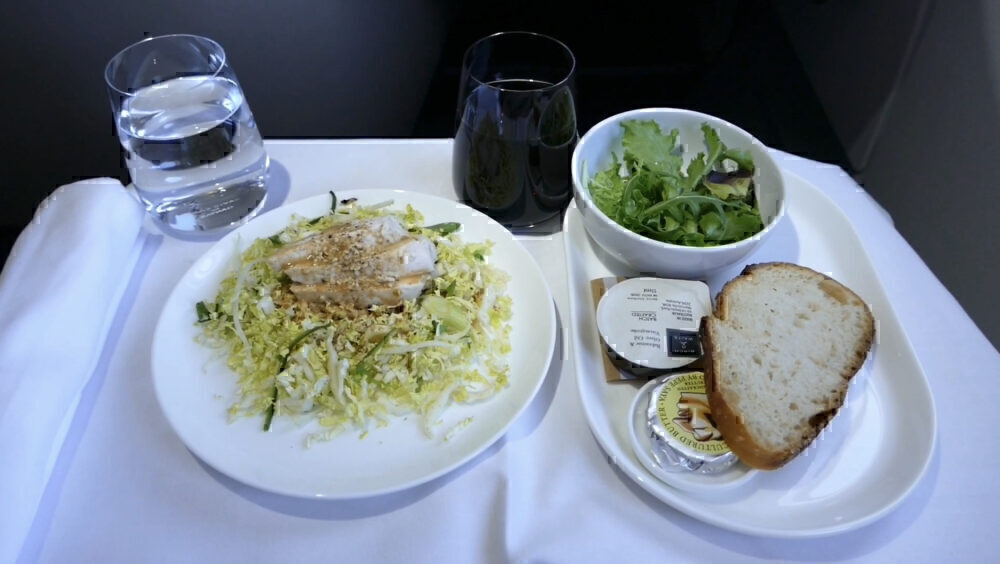 I chose the steak for main, which was much tastier and not as well done as this picture would suggest! 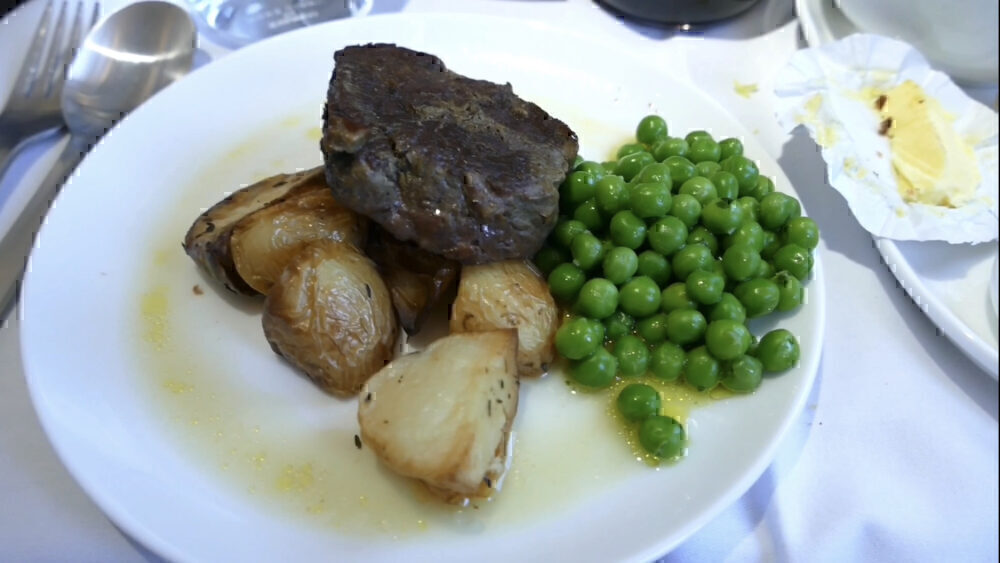 I’d asked for the bread and butter pudding for dessert, but the crew said they had run out. I had to settle for an ice cream sandwich instead – which was not something I’d have chosen but was still a perfectly acceptable finish to a decent meal. 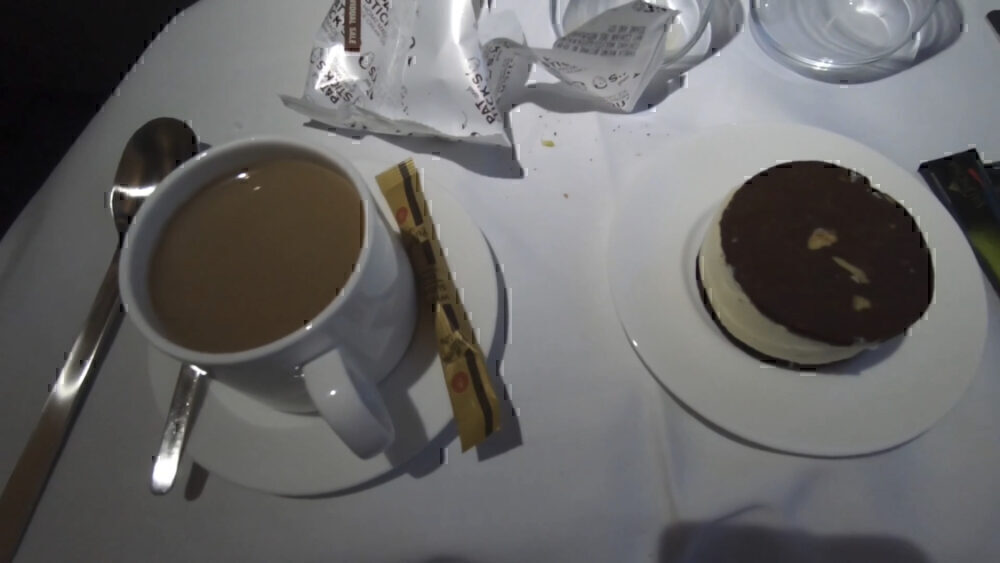 Just after I’d finished, the purser came up and apologised as they’d miscounted, and there was a spare bread and butter pudding after all, which he offered me. This was delicious, although very bad for my waistline! 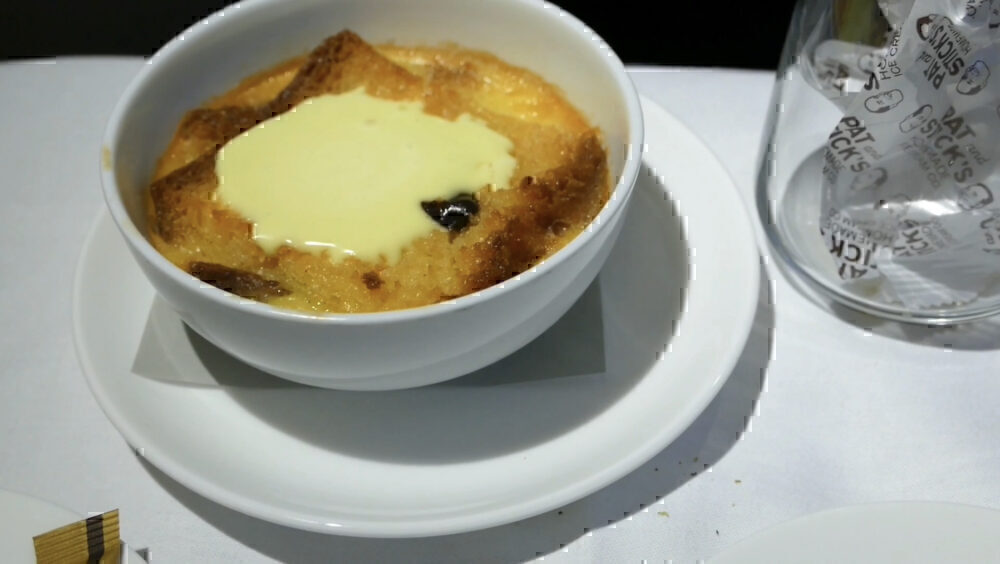 I had a quick two hour nap on this flight, using the flat bed, which also came with blankets and mattress topper. I had no problems sleeping. 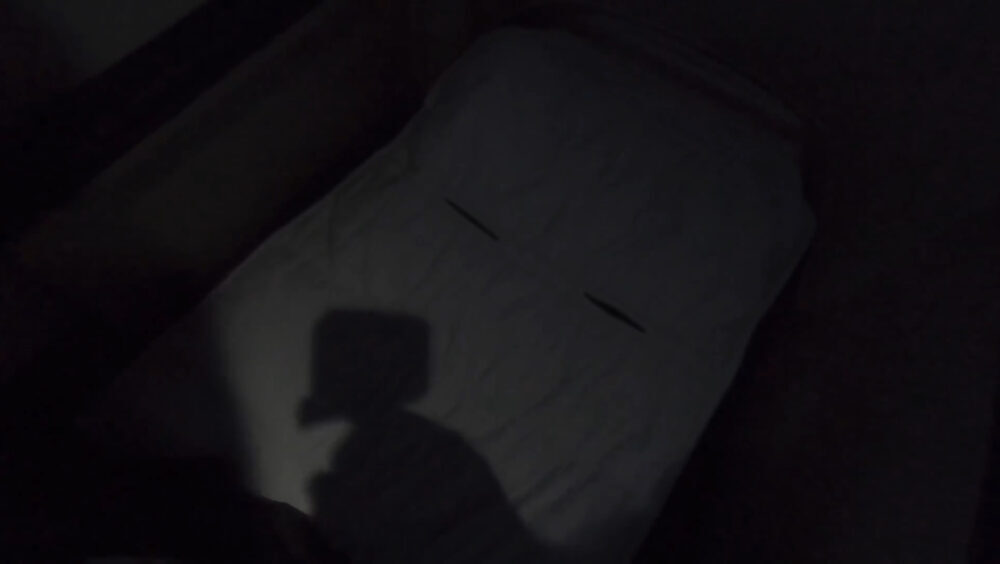 Sadly, this particular A330 has no wifi, so for entertainment you must reply on the IFE, which had a fair selection of movies and films to pass the time. 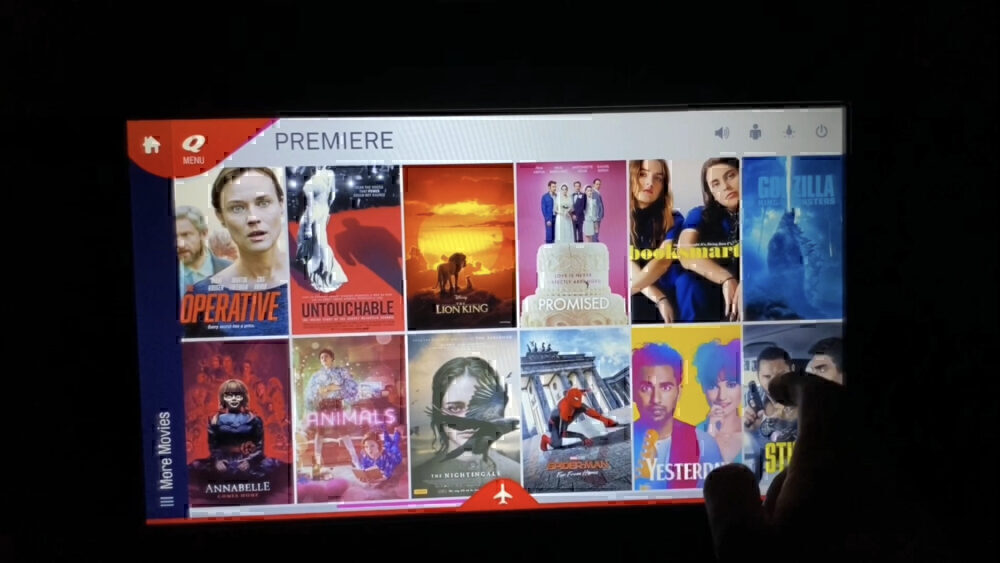 A pre-landing snack of lamb koftas was served along with coffee and cookies, and this was also very pleasant. The food service on this flight overall was very good. Food and drink is important to the in flight experience; it’s the most elementary way airlines can provide soft hospitality and provides numerous touch points with the crew and their personalities. Qantas left a very positive impression of Australia’s ability to reach beyond the stereotypes we receive in England of beer and barbies, and deliver proper, top tier service. 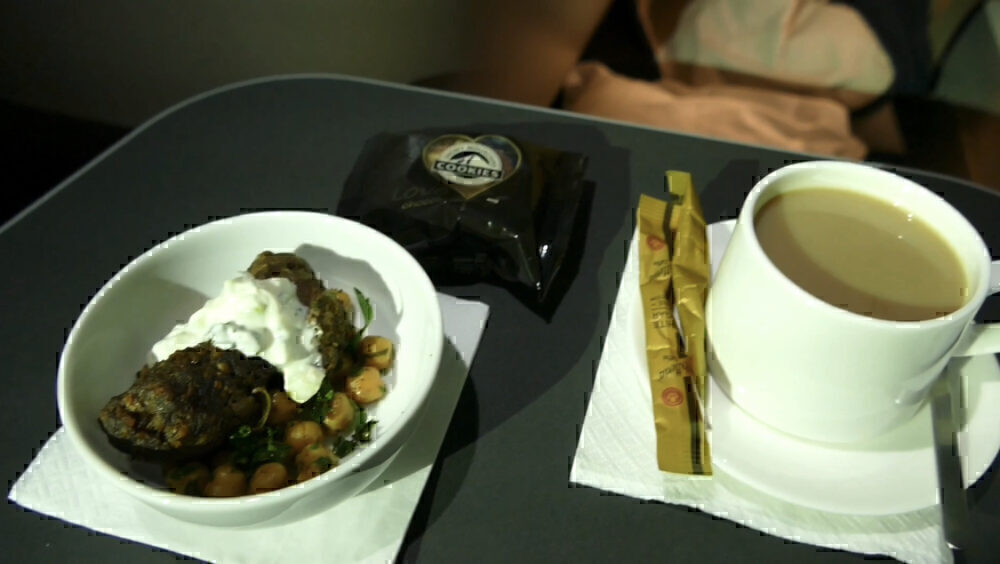 It was dark by the time we reached Bali, but we had some holding to do thanks to a spectacular, intense electrical storm. This photo does not do the intensity of the storm justice! 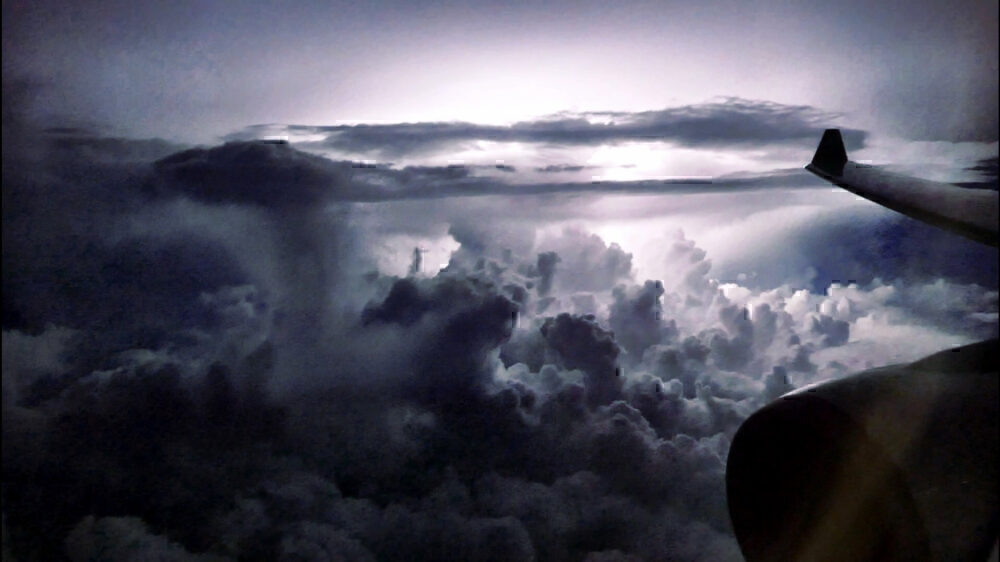 At the moment, Qantas has cancelled the sale of nearly all its international routes, and this flight from December 2019 certainly feels like a bit of a time capsule. At the moment, as an Aussie your best bet for getting on a Qantas widebody flight is probably a flight to nowhere.

Overall, a good experience, and I hope to return to Australia as soon as is practical with the virus situation. 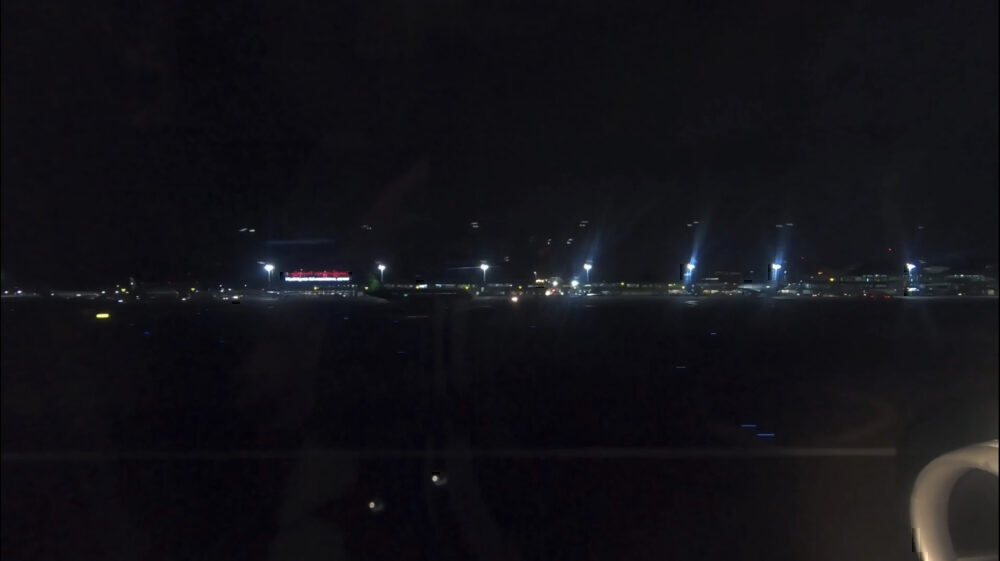