Twenty years ago, Qantas ordered six Boeing 747-400ERs. Historically, Qantas had been a long-haul airline. It’s easy to forget that until recently, long-haul flying involved one or more stops. But in terms of both time and money, stopovers were costly and inefficient. Qantas was keen to do more point to point long-haul flying and needed aircraft with the wings to do so.

With a typical configuration and carrying a standard load, a Boeing 747-400 can fly for about 13,500 kilometers. Very lightly loaded and with nice tailwinds, it can fly further, as Qantas demonstrated in 1989. Loaded with passengers, cargo, and building in a safety buffer for delays and diversions, your typical 747-400 could make it across the Pacific, but only just. Qantas wanted something a little extra.

“Dating back to their first jet airplanes in the 1950s, Qantas has always urged Boeing to provide more range,” said Boeing’s Toby Bright when the first Qantas 747-400ER landed in 2002.

Qantas was the only airline to order the 747-400ER. Qantas took the option of a single extra fuel tank. The 747-400ER had an increased takeoff weight of 412,770 kilograms. The plane could carry an extra 6,800 kilograms of weight and fly an extra 800 kilometers.

Those improvements might seem like a fractional change on the already impressive 747-400 capabilities. But that extra 6,800 kilograms can mean the difference between a profit or loss on a flight. The extra range opened up new routes, such as Melbourne – Los Angeles, and Dallas – Brisbane. The Boeing 747-400ER gave Qantas extra flexibility and more options.

“The 747 has been a key to our long-haul success for more than 30 years, and this latest model with its enhanced performance capability will continue to give Qantas a competitive edge, especially on long-haul trans-pacific routes,” said David Forsyth, a Qantas executive when the first 747-400ER arrived in Sydney.

The Boeing 747-400ERs flew for Qantas for almost two decades

The first Qantas 747-400ER was VH-OEF Sydney. That plane arrived in November 2002, and Qantas regulars would recognize it from its special oneworld colors. Over 2002 and 2003, VH-OEE Nullarbor, VH-OEG Parkes, VH-OEH Hervey Bay, VH-OEI Ceduna, and VH-OEJ Wunala all entered into service with Qantas.

For the best part of two decades, these six planes flew Qantas passengers around the world. If the registrations don’t ring a bell, the planes’ names would be familiar to many people.

The 747-400ERs were also the last 747s to exit the Qantas fleet. All flew off into the sunset last year. The last 747-400ER to go was VH-OEJ Wunala. That plane flew off to California in July. That flight marked the end of the Boeing 747 at Qantas after 49 years. 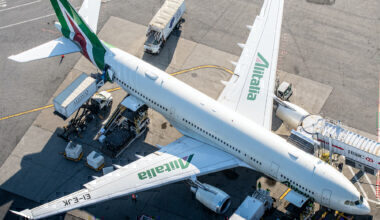