The airline industry is in global turmoil now – but until the time comes that travel restrictions are lifted and it’s safe for people to travel again, I’ll be posting historic reports of my travels before the restrictions were in place.

I was lucky to travel with Qatar Airways on a one way fare from Helsinki to Canberra in business class. Purchased during a sale, I parted with 1300 Euro for the ticket. I also made videos of both the Helsinki-Doha and Doha-Canberra legs, and in today’s report I’ll be focusing on the first of these:

Qatar’s check in isn’t in the main hall at Helsinki T2 along with Oneworld partner Finnair; it’s down a side concourse. There’s a separate line for business class and frequent fliers. 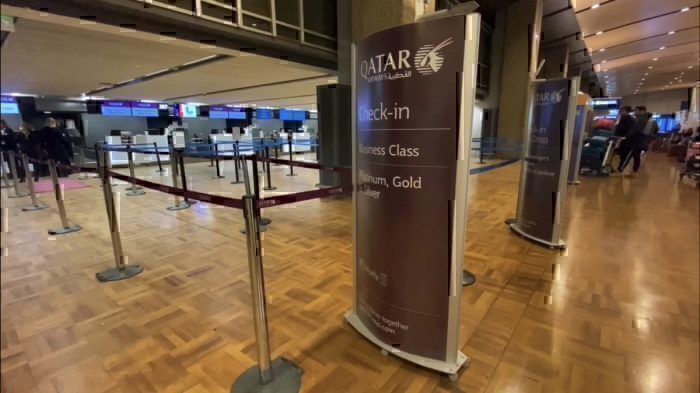 Finnair operate two new lounges in the non-Schengen area of the terminal. The Platinum Wing (for OneWorld Emeralds only) is marvellous, as I can testify from a separate visit, but at the time of travelling I was a mere Oneworld Sapphire, so I had to use the regular business class lounge. 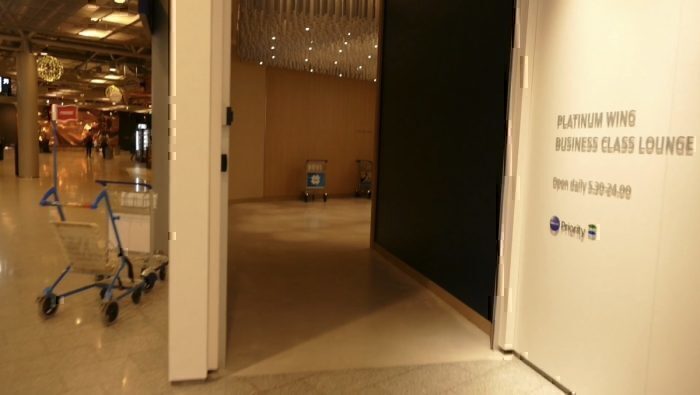 The business class lounge is rather elementary with no particularly outstanding features, no outside light and an average selection of food (Jaffa cakes for breakfast though…?). 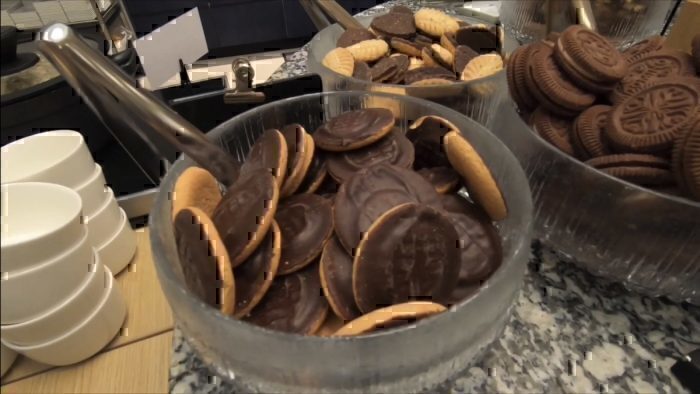 It’s a broadly inoffensive lounge but the general feeling I have in retrospect is that there was a bit of skimping on style by the designers, to enhance the difference between it and the Platinum Wing, which is utterly fantastic. Helsinki takes itself seriously as a great transfer airport – and as a whole is one of my favourite in the world in that respect – because the dominant tenant is Finnair, who rely heavily on connections from the Far East. 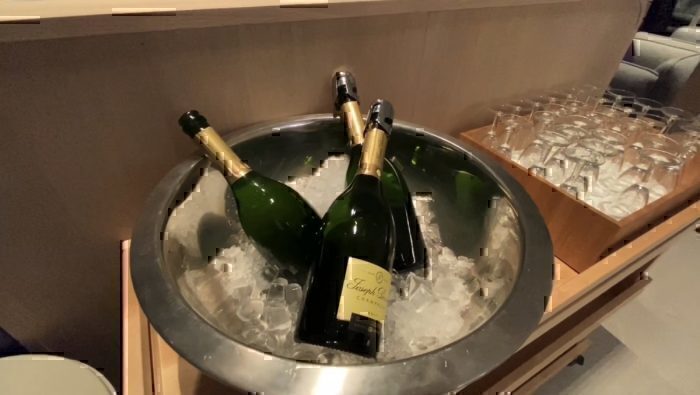 There are five showers which you can book from a screen in the shower complex itself. 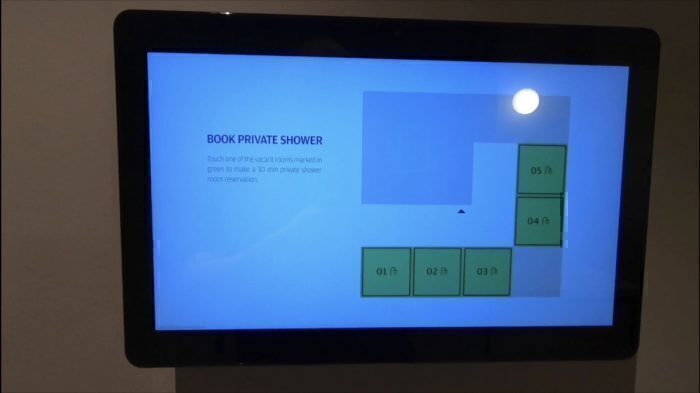 Onboard, this Qatar A350-900 is fitted with reverse herringbone Super Diamond seats. No Q-Suites on this aircraft, but these seats are still superb, especially for the 6 hour flight down to Doha. The Helsinki route sees a mixture of Qatar aircraft, including the mid-haul configured A320, so to score an A350-900 with this configuration on this route is a good result. 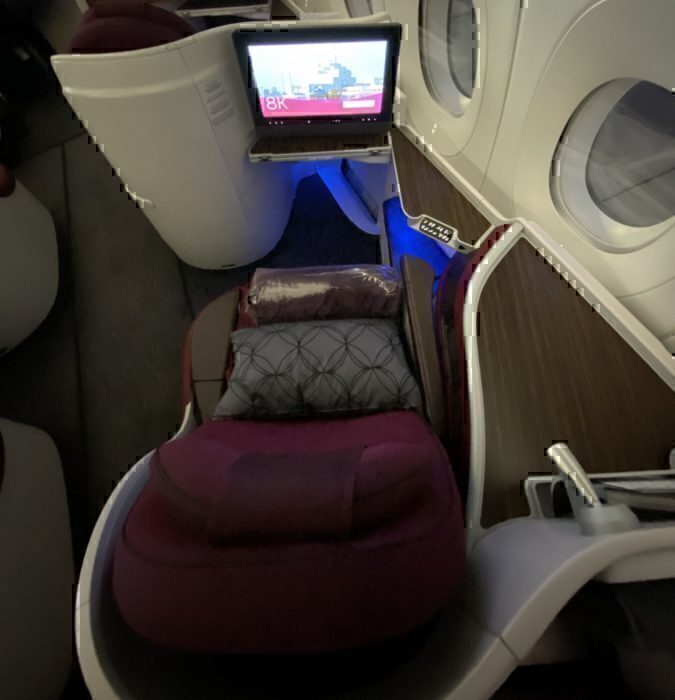 I took 9K, which is at the back of the business class cabin. 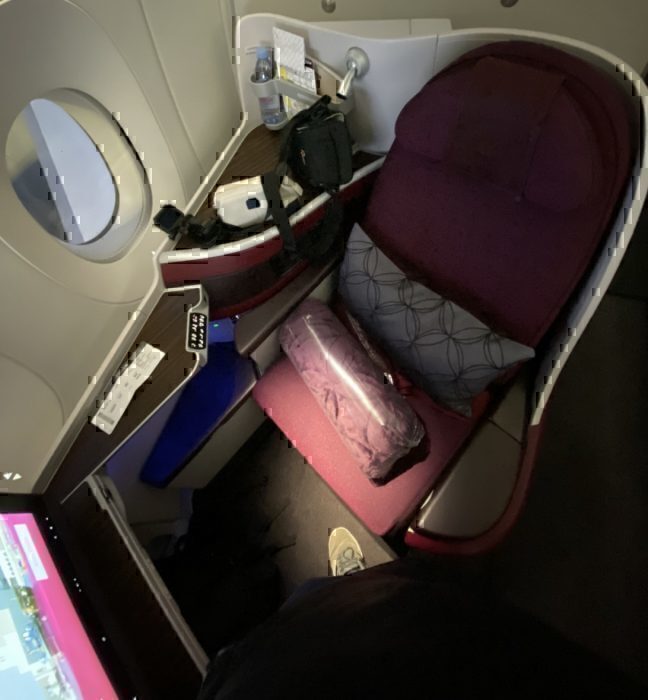 There are two cabins on this aircraft for business class: one at the front and one behind the second door. There is no galley between the two, and this, coupled with no centre bins for hand baggage contributes to a very airy and pleasant aesthetic. 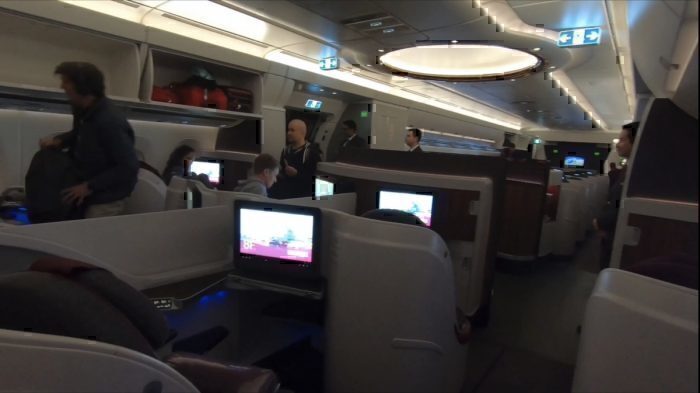 Takeoff was punctual at just after 0910 local time. 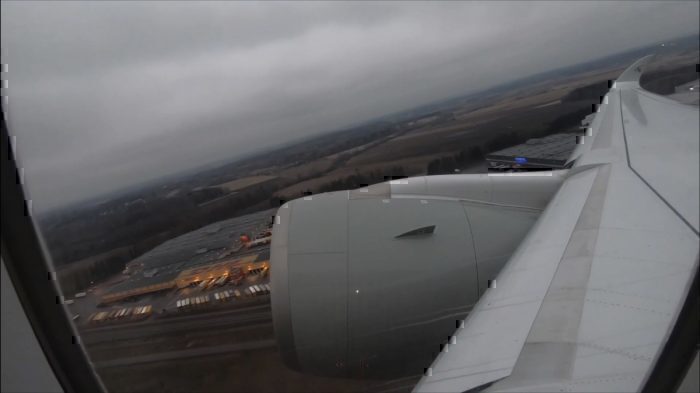 The seat, being a custom Super Diamond, is like many I’ve reviewed before, but has two especially welcome features. A shoe box, which will take all but the largest shoes (boots will probably not fit), and a massive table which stretches all the way from midriff to TV screen. I think this is one of the largest tables in any business class right now. 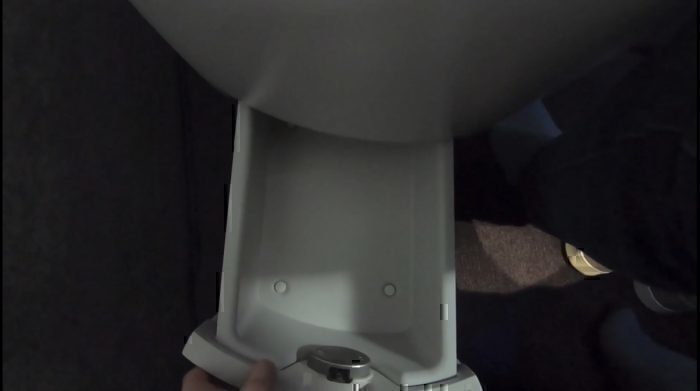 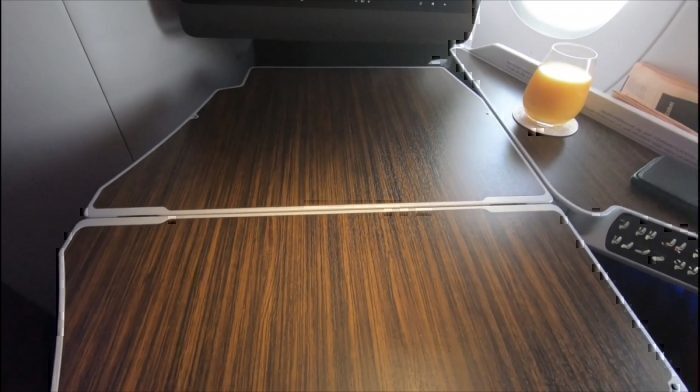 This A350 comes with shades which can be controlled with a small switch, too. 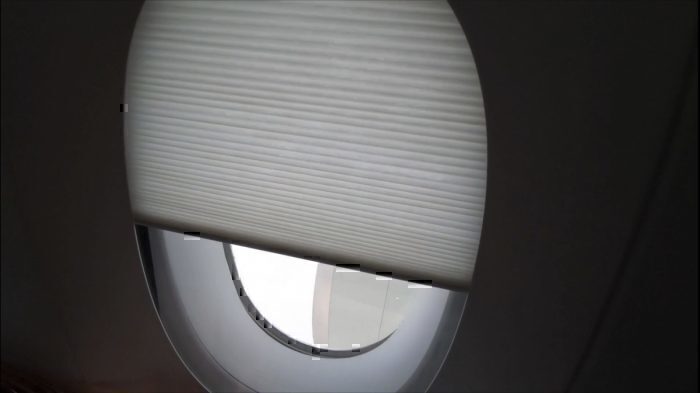 The mood lighting is gorgeous; Qatar really care about aesthetic and brand and on this flight it was very easy to see this in action. 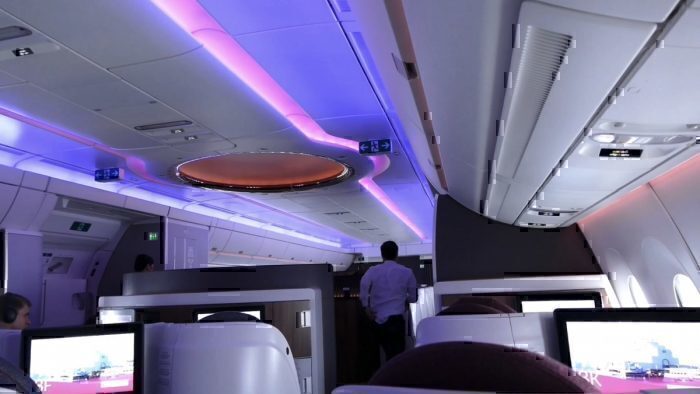 Qatar have even fitted this aircraft with tail and belly cameras at additional cost to themselves, and you can watch the cameras through the IFE. 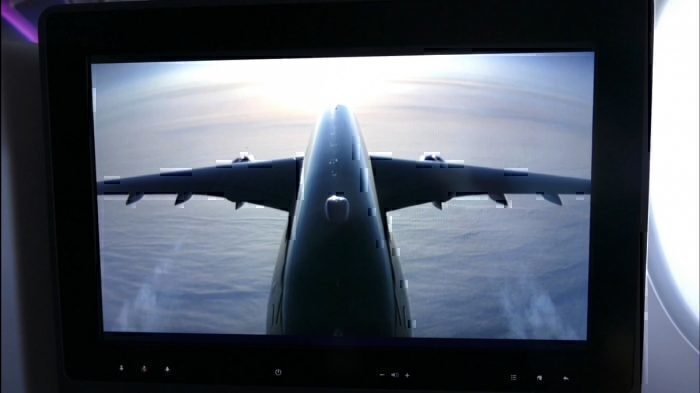 The internet was very reasonably priced at just 10 USD for a 6 hour flight, and the connection was very solid throughout. 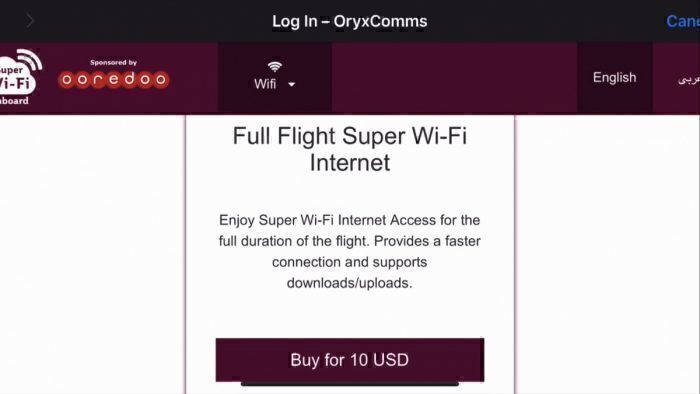 Breakfast was served shortly after takeoff. Ordinarily, I find breakfast a very uninspiring meal on most airlines, but Qatar’s offering was spectacularly good. The presentation was faultless from my cabin crew member, and the quality of the food was excellent. I had fruit to start: 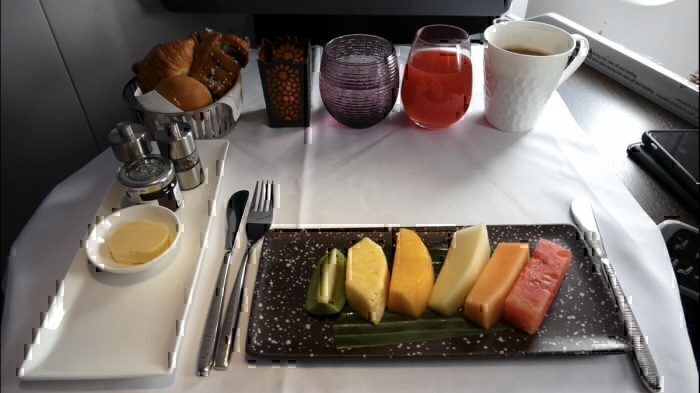 …accompanied with various bread and pastry… 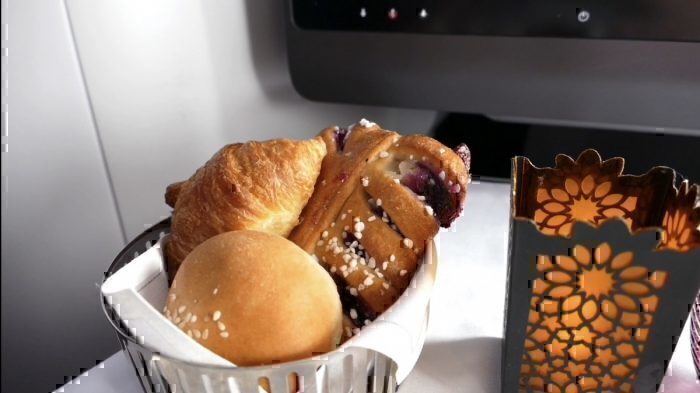 …followed by yoghurt and granola… 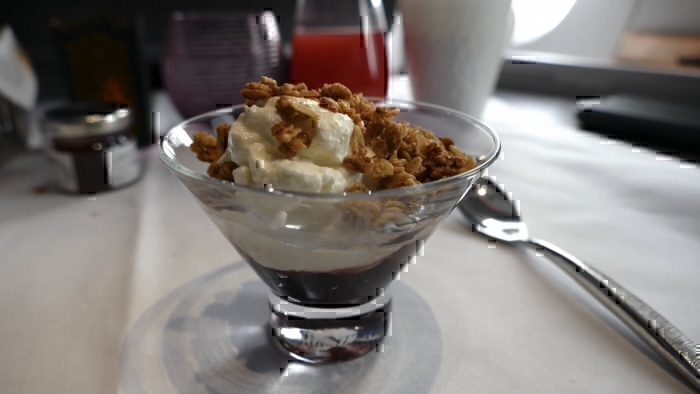 …and finished with poultry sausage, eggs and potato rosti. 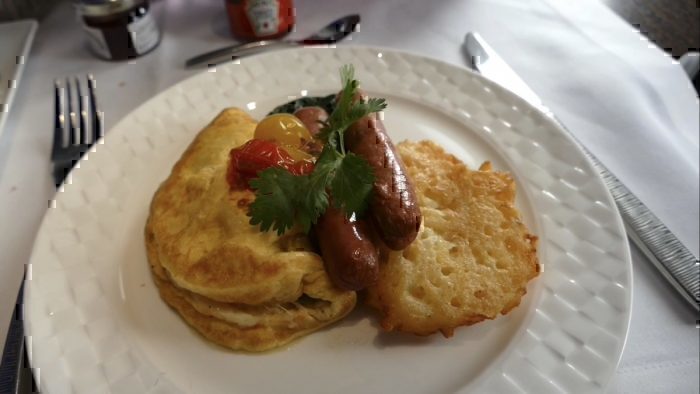 By the way, I received about six or seven hot or cold towels on this flight, surely a world record! 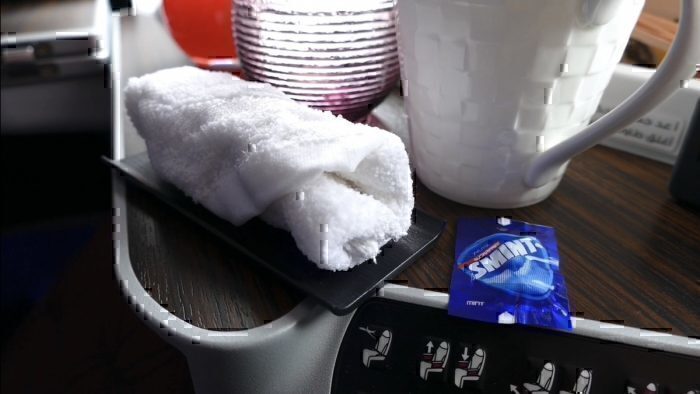 The IFE is delivered via a gorgeous 17 inch touchscreen which also comes with a remote. Qatar brand this system as Oryx One. As a key player in the ultra long haul market, the airline has a mesmerising selection of content. 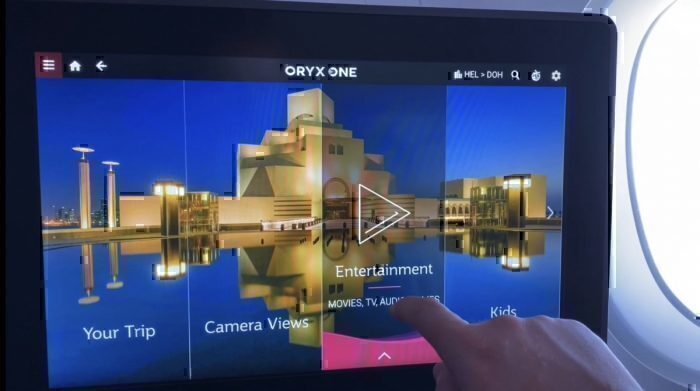 The seat reclines into a fully flat bed. Qatar’s bedding is excellent, with a wonderful velvet blanket, firm mattress support and a plump pillow ensuring even the shortest naps will be comfortable. I managed a good two hours. 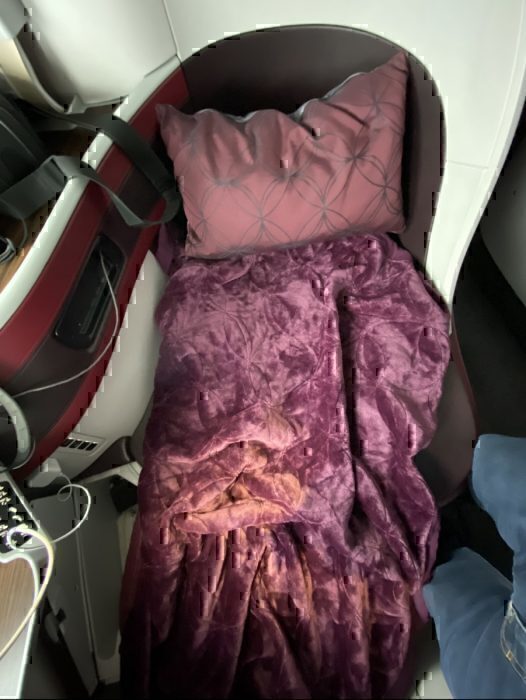 An hour before landing, Qatar served afternoon tea. As has been the case with several of my recent flight experiences, the second meal service was not perfect. The presentation here was excellent again, but the clotted cream wasn’t clotted at all. You should be able to pick the entire ball of cream out of the dish and throw it against a wall and it stick (please don’t do this though!). Qatar’s was runny, like a sloppy hummus, and the scones were tiny and dry. A shame, because the cakes and sandwiches were delicious. 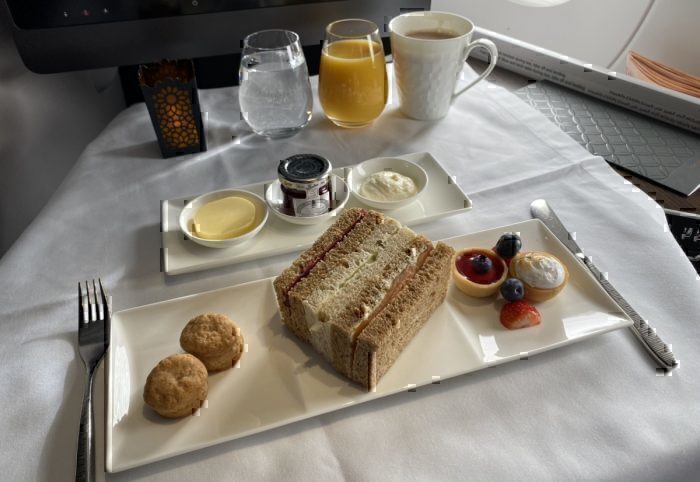 The amenity kits are supplied by Eric’s boutique and contain some decent quality toiletries. I rarely use these, but I really liked the bag which I kept as a gift. 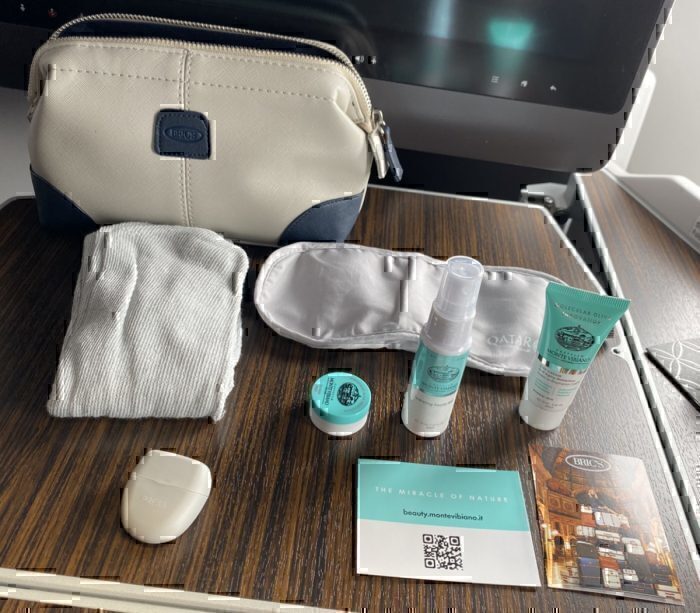 There are further Rituals toiletries in the lavatories, too. 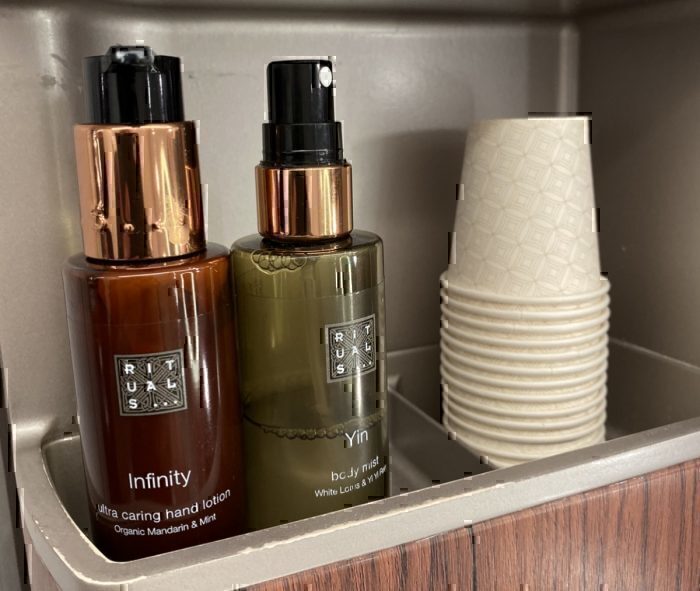 The only aspect for complaint about Qatar’s delivery on this flight was a mediocre cream scone during the afternoon tea service. All in all, a splendid experience and a total bargain in my opinion. 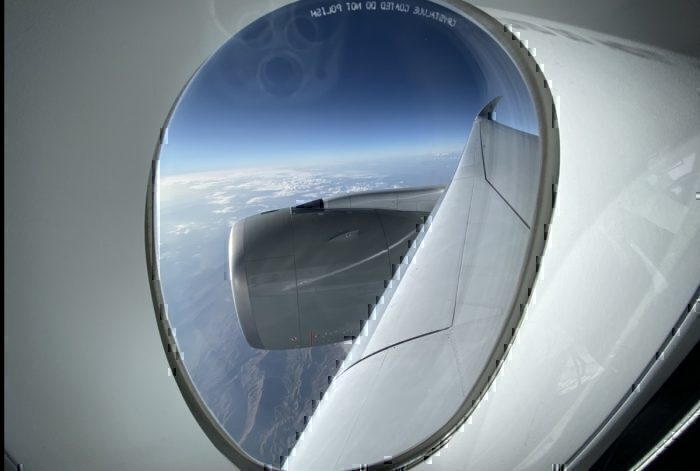 Our descent was sharp and there was no holding required in Doha.

Qatar Airways is likely to be well positioned to weather the current aviation crisis. It’s a privilege to be able to travel like this, and it’s a privilege that I hope returns sooner rather than later. 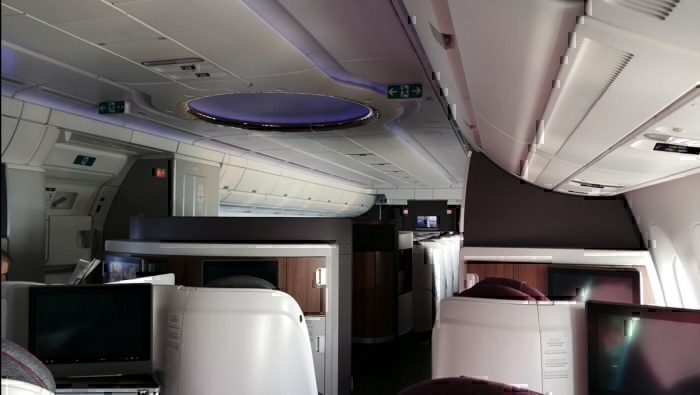 This flight was surpassed by my Q-Suites flight to Canberra a few days later. I will be posting a review of this experience on YouTube and here on Simple Flying soon. I went into this experience almost wanting to debunk some of the hype around Qatar’s product, but, truth be told, it’s absolutely first class. 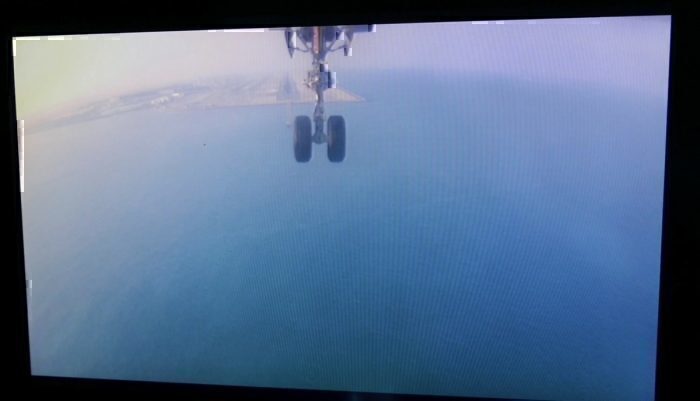 Largely unseen in the video and in my written reports, the crew made a big difference on this trip. Here’s hoping the current crisis does as little damage as possible to crew careers as we can reasonably hope for, and for a swift resumption to normality once it’s safe.