REX Vs Qantas Vs Virgin – How Do The Carriers Compare?

Yesterday, Australia’s newest trunk city airline, REX, burst out of its box, putting Sydney – Melbourne – Sydney fares on sale. The regional airline is poised to start flying Boeing 737-800s between the two cities on March 1, taking on the Qantas Group and Virgin Australia.

In a media statement today, REX laid it down to Qantas and Virgin Australia, saying;

“Travelers will finally have a high quality, reliable, and affordable airline to fly between Australia’s major capital cities.”

“For the first time, they don’t have to choose between low fares with minimal service and premium pricing for more reliable flights.”

How the airlines compare flying between Sydney and Melbourne

Here’s a quick look at how the players on what is normally the world’s second-busiest airline route compare. The comparison is based on the current product offerings for a random weekday in March 2021 for a flight between Sydney and Melbourne.

This comparison is based on economy class travel at the cheapest available fare at the time of publication and assumes no status at the relevant airline. 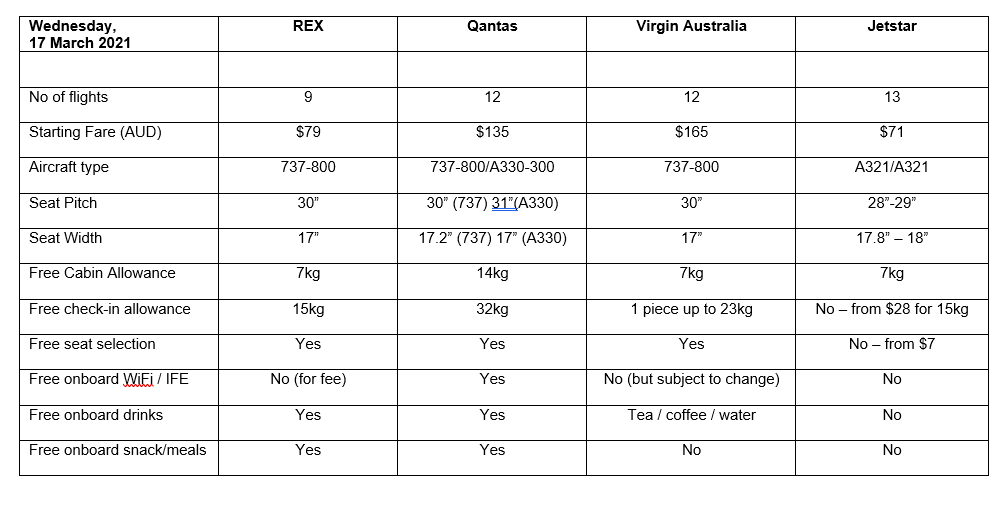 While REX isn’t offering the cheapest fare on March 17, it offers a pretty compelling product offering. Included in the $79 fare is seat selection, 15kg of checked-in luggage, and something to eat and drink on the plane.

Jetstar has a marginally cheaper lead-in rate. But they will slug you for bags and seat selection, so your fare could end up costing you significantly more. As with most low-cost carriers, unless you are traveling light, aren’t hungry, and don’t care where you sit, flying on them can sometimes be a false economy.

What’s super interesting on this particular date is the most expensive lead-in fare comes from Virgin Australia. It has recently restyled itself as a mid-market carrier, very similar to where REX is pitching itself. But on the selected date, REX is around half the price. REX’s basic luggage allowance is less. But they will offer a complimentary snack/meal to economy class passengers – something Virgin Australia will stop doing.

REX might dodge Qantas, but possibly collide with Virgin Australia

Qantas’ lead-in economy class fare also costs significantly more than REX (or Jetstar). However, the Qantas fare covers everything. That includes 32 kilograms of checked-in bags, inflight WiFi, food, drinks, seat selection, and a generous cabin baggage policy. And, if you pick the right flight, you could find yourself flying south on the day on a nice A330 rather than a pokier Boeing 737-800. While it’s not the cheapest offering on the market, Qantas is clearly differentiating itself, even down the back of the plane.

When REX’s services between Sydney and Melbourne take to the air, Qantas will probably manage to fly at a higher altitude. The turf war could be between Virgin Australia and REX. Both have similar economy class product offerings, but REX is outmatching it with its inexpensive lead-in fares right now.

Here’s another thing worth keeping in mind about REX. Unlike Virgin Australia and Qantas, Priority Pass cardholders can access the REX lounges in Sydney and Melbourne. It’s a little thing but possibly a deal-maker for international travelers to Australia when sorting out their local flights. It’s the sort of thing that could help give REX the edge as it throws down the gauntlet to the established airlines on the route between Sydney and Melbourne.