Ryanair’s Polish subsidiary Buzz has operated a medical cargo flight taking vital aid to Warsaw. The special flight saw passengers replaced with cargo on the journey from Moldova to Poland.

As a result of the current travel bans and warnings in place, tied with a general lack of demand, we’ve seen some weird and wonderful flights operated recently. While Ryanair has canceled 99% of its flights, a large number of its fleet have been operating ghost flights to remain airworthy and to keep pilots current. However, the reason for the ghost flights became clear today, as one of the airline’s 737s stepped in to provide medical aid.

To Moldova and back

According to Planespotters, the Boeing 737-800 used in today’s mission was previously registered as EI-GDN with the main Ryanair airline. It last flew under its former registration from Lisbon to Stansted on the 27th of March according to FlightRadar24.com. It is then shown by Radar Box as flying to Warsaw on 3rd of April, where it has remained since.

Today the aircraft operated its first flight for the airline’s Polish subsidiary, Buzz. At 08:27 local time, the aircraft departed from Warsaw (WMI) for Chisinau (KIV) at 08:27 according to FlightRadar24.com. It touched down as FR1001 in the Moldovan capital at 10:39.

The aircraft then remained on the ground for one hour while the aircraft was loaded for medical supplies destined for front line health workers in Poland. Boxes were loaded both into the aircraft’s hold and placed on passenger seats making the most of the available space.

Once the aircraft had been loaded up with supplies, it departed from Chisinau at 11:39 as flight FR1002. Following its return journey, it touched back down in Warsaw at 12:02.

Speaking about the flight, a Ryanair spokesperson told Simple Flying:

“We were proud to transport essential PPE medical equipment to Warsaw Modlin Airport today – to help in the fight against Covid-19. This personal protective equipment will reach hospitals and frontline staff in the Mazovia region of Poland, and the Ryanair Group is working with EU governments to help where we can. Thanks to our pilots and crew at Buzz for their stellar work.”

In addition to today’s special flight, Ryanair has also been running a number of ghost flights. These typically see the aircraft involved taking off before looping back to the airport and landing again. Ryanair previously told Simple Flying that these flights were in order to ensure that aircraft and crew remained airworthy and ready to operate such flights as occurred today.

Have you seen any Ryanair flights since the airline halted most operations? Let us know when and where in the comments! 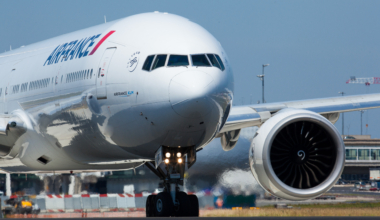