The nearly 19-year-old CRJ700 registration number F-GRZF had, according to aviation enthusiast website Planespotters.net, been taken out of service by Air France in December while waiting to join SkyWest Airlines in January 2021. The plane was flown to the Desert Southwest because its new owner SkyWest Airlines has a maintenance base at Tucson International Airport, where it also provides regional flights for United Express.

About the Bombardier CRJ700

The Bombardier CRJ700 is a member of the Canadian-built Bombardier CRJ family of aircraft along with the CRJ900 and CRJ1000. The design of the plane was derived from the smaller CRJ100 and 200 airliners.

The CRJ700 made its maiden flight in 1999 and was soon followed by a stretched version called the CRJ900, which offered a further 20 seats. While the smaller CRJ100 and CRJ200 planes were discontinued in 2006, the larger versions continued to be built into the 2010s.

Japanese corporation Mitsubishi Heavy Industries finalized a deal to purchase Bombardier last summer. Mitsubishi says that it will not build any more CRJ aircraft but will continue to manufacture parts for CRJ operators while it focuses on its SpaceJet aircraft.

In 2018, HOP! was restructured, merging all flights under Air France’s AF flight code before announcing a year later that HOP! would now be called  “Air France Hop.” In December 2020, Air France announced that it was getting rid of the name “Air France Hop” and repainting the fleet in the Air France livery. The plan would also see its Paris Orly hub transferred to Transavia France and all of its Bombardier CRJ aircraft retired.

Headquartered in St. George, Utah, SkyWest Airlines is the largest regional airline in North America, operating an average of more than 2,400 flights per day to 250 cities in the United States, Canada, Mexico. SkyWest Airlines might not seem so familiar a name because it operates regional feeder flights on behalf of major airlines. Operating under the name Delta Connect, American Eagle, United Express, and Alaska SkyWest SkyWest Airlines operated the following number of flights before the current COVID-19 global pandemic:

According to Planspotters.net, SkyWest Airlines fleet is made up of the following aircraft:

As you can see from the above list, the CRJ family of aircraft plays a big role in the SkyWest Airlines fleet. The new aircraft they are receiving from Air France probably arrived for a bargain price as other operators look to retire many of their older regional jets.

What do you think about SkyWest Airlines acquiring older CRJ700 aircraft? Please tell us what you think in the comments. 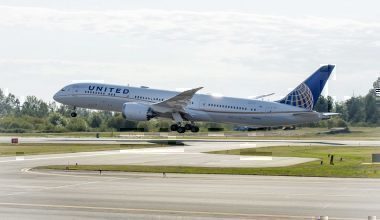