To infinity . . . and beyond! In fact, one Buzz Lightyear toy traveled from Dallas, Texas, all the way to Little Rock, Arkansas, and back again. The toy had been forgotten on a Southwest plane and was returned to the two-year-old boy’s family after a ramp worker found the toy later the same day.

Going above and beyond

Traveling with kids can be tough. So, when the Davis family had to travel to Dallas to visit family, they brought along their son’s favorite Buzz Lightyear toy to make the trip a little easier. Upon arrival at Dallas Love Field airport, the family rented a car. But just as they set off for the next part of their journey, they realized the beloved toy was missing.

It turns out Buzz had been left on the Southwest plane the family had just disembarked. Due to the rapid turnaround time, the plane had already left by the time the family realized the toy was gone. Luckily for Buzz and his owner, two-year-old Hagen, the toy was found in Little Rock, Arkansas, by a ramp agent named Jason.

Jason saw Hagen’s name on the toy’s foot; just like in the Toy Story film, Hagen marked his favorite toy with his name on the bottom of the boot. The ramp agent managed to track down the only passenger who had flown on that specific Southwest plane that day with the name Hagen.

All sorts of toys and belongings get left behind on planes, and it’s fairly usual for airlines and airport staff to track down the owner and send the items back. However, Buzz Lightyear returned to Hagen in a slightly unusual way, worthy of the space ranger’s reputation.

A week after losing Buzz, Hagen and his parents got a surprise when the toy showed up at their home, having been on quite an adventure. Jason had sent to toy back in a specially decorated box complete with photos of Buzz’s adventures and a note addressed “To Commander Hagen.”

“The thought and care he put into getting Hagen his Buzz back when Hagen left him on the plane in Dallas was beyond thoughtful and sweet, it will be a memory he has to cherish forever and an incredibly cool story to tell as he gets older.”

This is the second time in just three months that Southwest has gone out of its way to return a lost toy to its owner. Just before the new year, the airline took to Twitter to track down the owner of a stuffed bear that had been left at Baltimore Airport. Just like Buzz, the bear was photographed on several adventures with members of the Southwest team. However, unlike Buzz, who made it safely home, the bear still appears to be unclaimed. 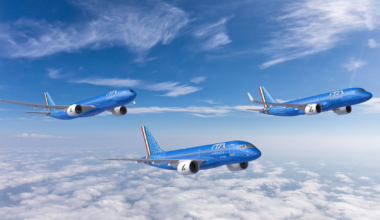