Spirit Airlines has an order for Airbus A319neos on the book. This is one Airbus model that has not sold quite as well as its predecessor, the A319ceo, but one with a few major customers. While Airbus records that Spirit Airlines has 47 of the type on order, this is not the whole story.

In January, Spirit Airlines finalized its order for 100 new Airbus A320neo family aircraft. The order included a mix of A319neo, A320neo, and A321neo aircraft. Since then, on Airbus’ orders and deliveries report, the European planemaker has recorded 47 Airbus A319neos on order from Spirit Airlines. Spirit is by far the largest customer of the A319neo, with only 84 of the models listed on Airbus’ order book, including some private jets.

Spirit gave a huge boost to the Airbus A319neo program. And though the A319neo has not been selling very well, the airline has given the program a lifeline with the orders, representing a display of confidence in the jet’s anticipated performance. As an ultra-low-cost carrier, Spirit has to ensure that all of its new aircraft are efficient and do not significantly impact its cost structure.

That is not the whole story regarding the A319neo

Simple Flying reached out to Spirit Airlines to get some more information on the Airbus A319neos, which provided a little more information. Beyond 2021, Spirit Airlines has 120 aircraft scheduled for delivery. This includes Airbus A319neos, A320neos, and A321neos. Spirit already flies A320neos. However, the airline has an option to upgauge or downgauge the shell type.

Essentially, Spirit Airlines can look at these 120 aircraft orders and decide if it wants to move things around and take either more or fewer of each type. So, that 47 aircraft that Airbus lists might not be the exact number that Spirit Airlines expects to fly once deliveries are complete. The airline, which is most definitely evaluating its network and fleet strategy on a continuing basis, may end up modifying its order – which means it could end up with fewer or more A319neos than what Airbus has on its order books.

Spirit Airlines has parked all of its 31 Airbus A319ceos. The airline has parked these aircraft for at least until 2021, if not indefinitely. These planes, which are the oldest in the airline’s fleet, are also the smallest. However, they also serve some important roles in the Spirit network, including operating some routes to Latin America. The biggest issue is not that Spirit thinks these aircraft are too small, but rather that they are a little too old to be highly profitable right now.

The Airbus A319s are configured in a 145-seat configuration, according to SeatGuru, with 10 Big Front Seats, which are essentially domestic first class recliner-style seats, but without other perks like meals and baggage. This is followed up by 135 standard economy seats, which are in a very tight pitch, though the exit rows offer some extra room.

The A319 is the only aircraft in Spirit’s fleet with over eight Big Front Seats. Whether Spirit maintains a similar configuration on the A319neos remains to be seen. As the carrier is evaluating its fleet plans for the next few years, it has not released a seating configuration, but it will likely be in the neighborhood of 145 passengers. It will also likely have the new interior Spirit debuted at the end of 2019.

Are you looking forward to flying on a Spirit Airlines Airbus A319neo? Let us know in the comments! 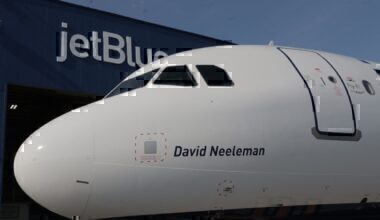