Istanbul’s Ataturk Airport closed to passenger traffic on 6th April 2019, and a new airport opened to the north of the city for full operations a few days beforehand. Having transited through the new airport during its interim opening back in February, I took the opportunity to sample Ataturk one last time a few weeks ago, using Turkish Airlines’ 777-300ER back to London. 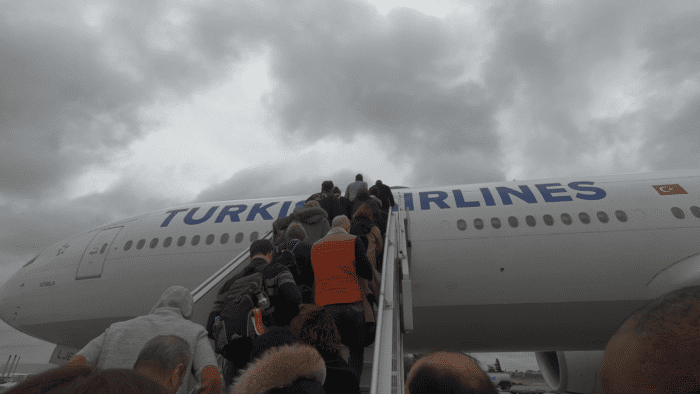 Probably the most feted wide body service in Europe, I was keen to try Turkish business class for my own curiosity and to make a review for my YouTube channel:

Turkish have competitive business fares worldwide and I also wanted to see if I thought it was a good value product for my travels further afield – I have some very big travel plans over the next 12-18 months!

The old business lounge at Ataturk was located at the end of the duty free area, and upon entering, the eyes were immediately drawn to the pool table – a real statement amenity by Turkish, signalling how they do things differently and like to surprise.

There were other “statement amenities” too (well…gimmicks!), such as the Scalectrix track, computer games consoles, and virtual driving range. There was even a cinema with a popcorn dispenser. 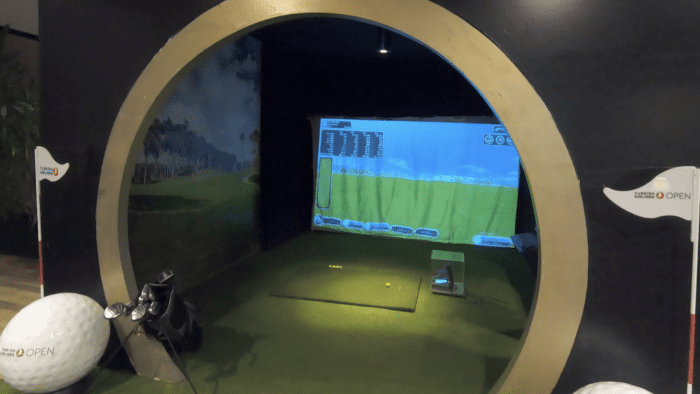 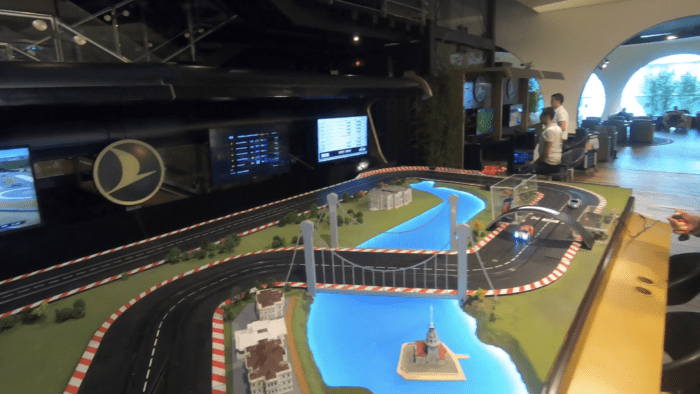 What was annoying about this lounge was the lack of thought for practicality, which took second place behind showy – if impressive – amenities. There was no unified dining area, for example, just half a dozen food stands spread around this massive lounge in several different areas. You can grab snacks and drinks, but there was no single place to sit down and eat breakfast. Want an omelette, a yoghurt, and a juice? Those were in three different places! The lounge was unmanageably large and impersonal, with not enough spaces for a spot of quiet work time. 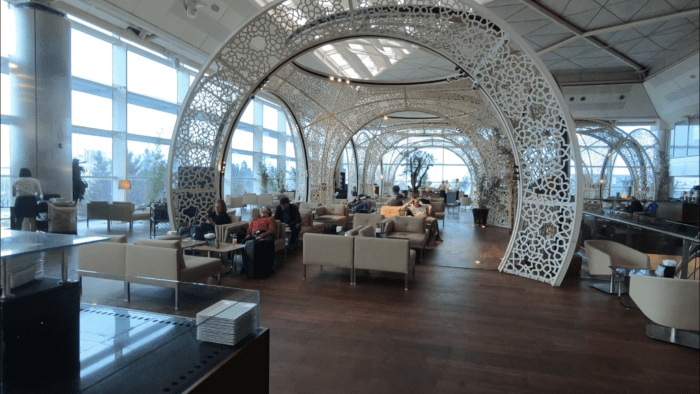 Boarding was by bus. Ataturk sure needed replacing – many wide bodies were boarded by bus here. I liked that, with my enthusiast’s hat on – getting close to the aircraft – but as a critic, such a situation was untenable for a major hub. Most passengers rightly hate buses, the elements, and stairs, not to mention the logistical difficulties involved in moving everyone to the aircraft.

Turkish Business Class is arranged in a 2-3-2 configuration. Now the new airport is open promising better passenger experiences, this configuration is probably the only thing stopping Turkish from being a truly world class airline at a business class level (they are excellent in economy by the way). New seats will accompany the delivery of 787 Dreamliner aircraft, which promises to be exciting. I wonder how the reduction in passengers will affect the airline’s competitive fares. There’s a forward cabin with 28 seats: 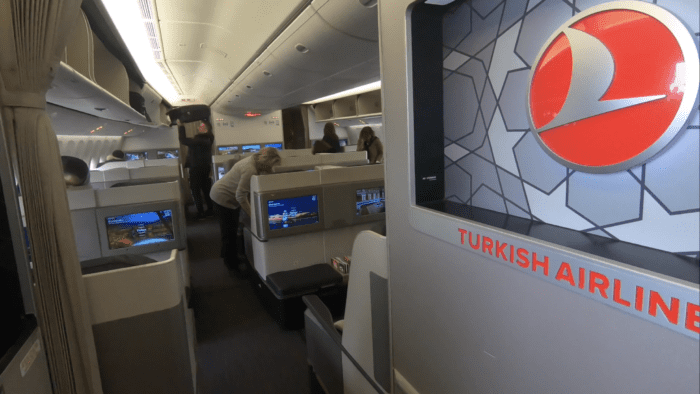 I chose to sit in the rear business cabin with 21 seats, as I find on aircraft with two business cabins the rearmost and smaller one tends to have more likelihood of finding yourself with no seat neighbour. 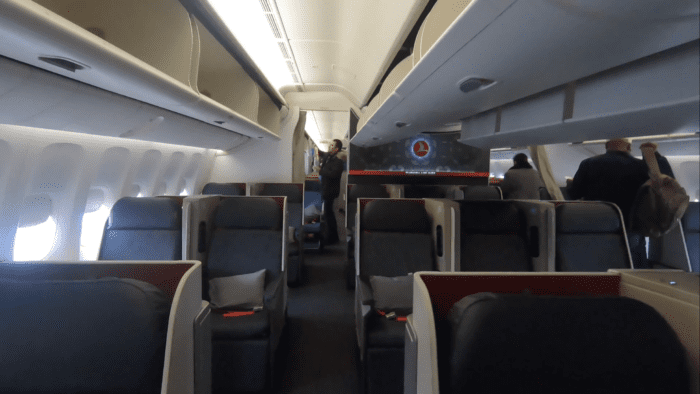 Nonetheless, for a 2-3-2 configuration the cabin is pleasant on the eye. Conservative greys are offset by warm reds and sharp detailing on the fabrics, while the bulkheads proudly display a backlit Turkish logo. There’s a definite sense of space in the cabin, accentuated by the fact I was in the rear business cabin of two, which tends to be less popular and indeed, I had a spare seat next to mine. Menus, newspapers, nuts and drinks were distributed before takeoff by conspicuously smart and professional cabin crew. 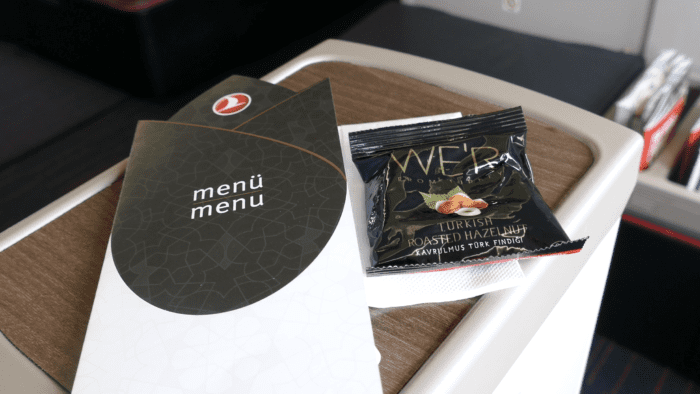 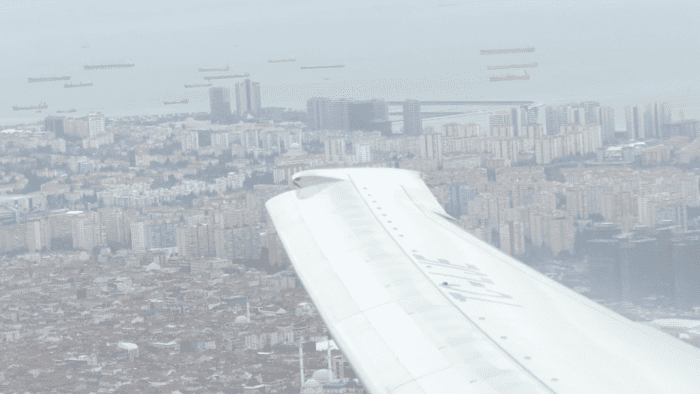 After takeoff, I explored the seat. I liked the privacy divider which was much more substantial than many pictures give it credit for. Fully extended, it’s impossible to see your neighbour and very difficult to see any other passengers at all. This privacy is offset by the four windows at my seat – 6K – which give my space an airy and open feel. There is no danger in feeling claustrophobic in Turkish business class, as long as you avoid the middle seat! 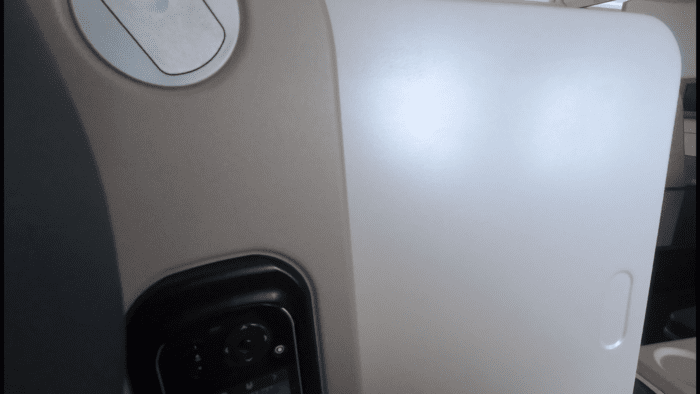 The table is also sturdy and easy to deploy and stow, and the seat converts into a flat bed, which I tested and found to be a decent length. An advantage of “straight” seating over reverse herringbone layouts is the bed stays a consistent width throughout, as it doesn’t have to tessellate with any other seats. Side sleepers like me will enjoy the room the bed offers. 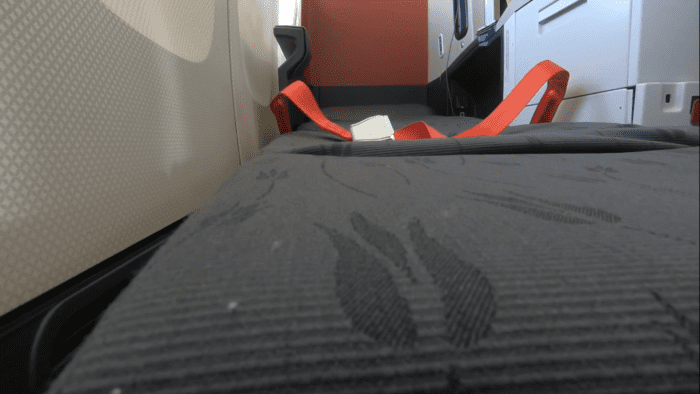 There is also a function on the seat to display a do not disturb sign when you were sleeping. 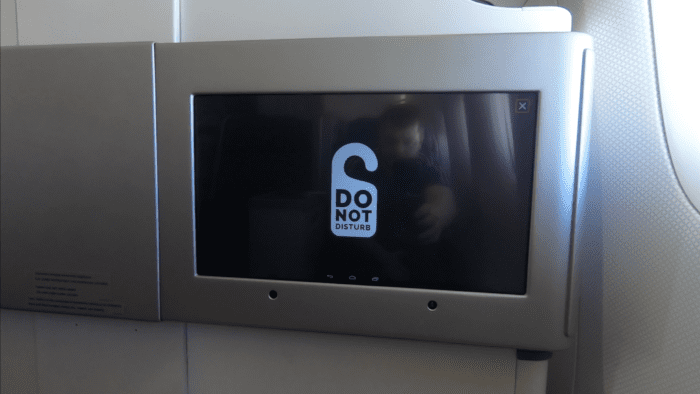 One of Turkish’s selling points is their food, provided by Do+Co caterers of Istanbul. I went for the salad, Turkish meatball with vegetable casserole and passion fruit mousse, and all were excellent. Nicely flavoured and presented, these were interesting dishes which have a broad appeal. I was impressed. 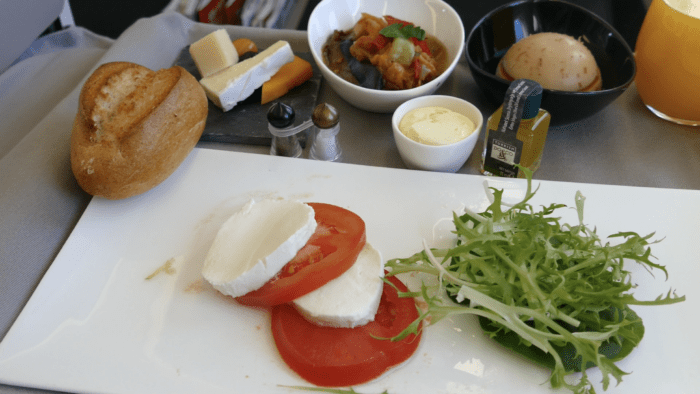 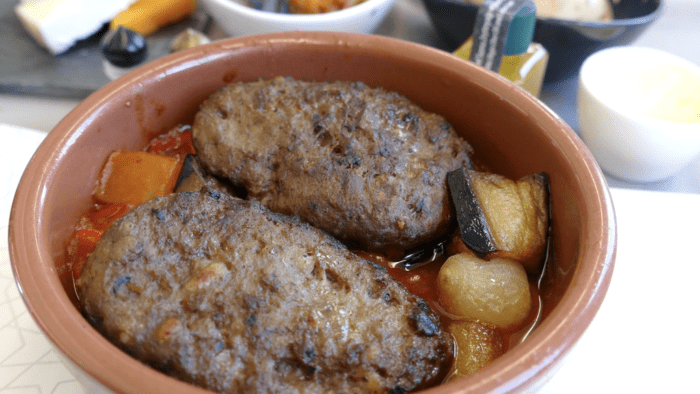 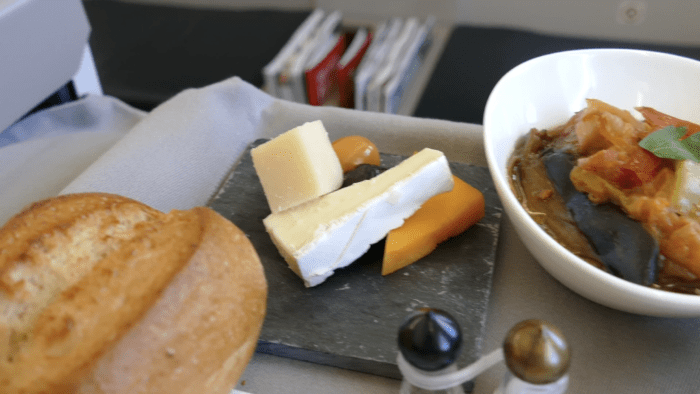 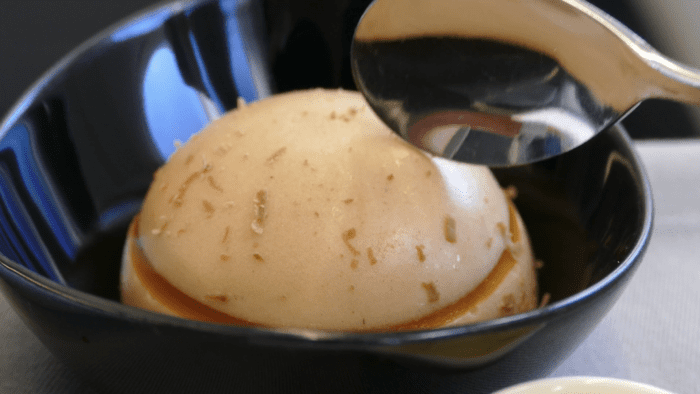 My meal was capped with a Turkish coffee, which comes with a rose-flavoured Turkish sweet on the side. 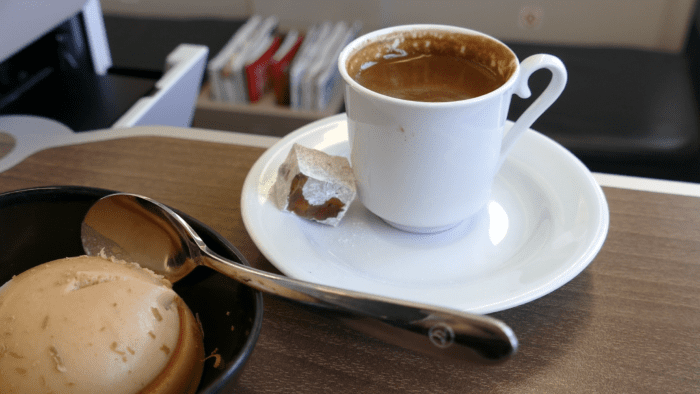 The bathrooms on the 777-300 are nicely appointed. Well-lit, nicely scented, with no sign of wear and tear, and with Molton Brown toiletries on hand, these are how aircraft toilets should be. There’s ample space to change into pyjamas should you fly this on a longer route. 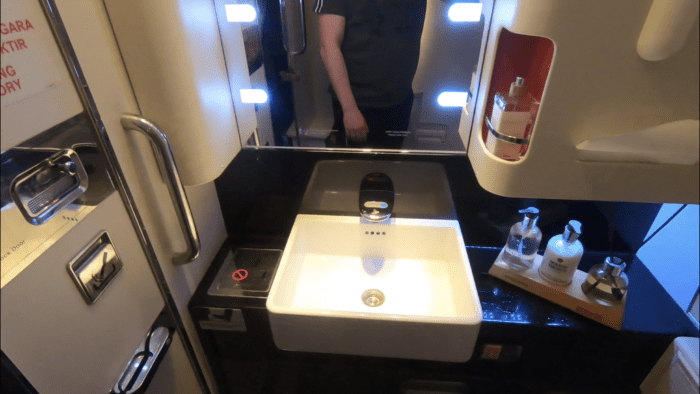 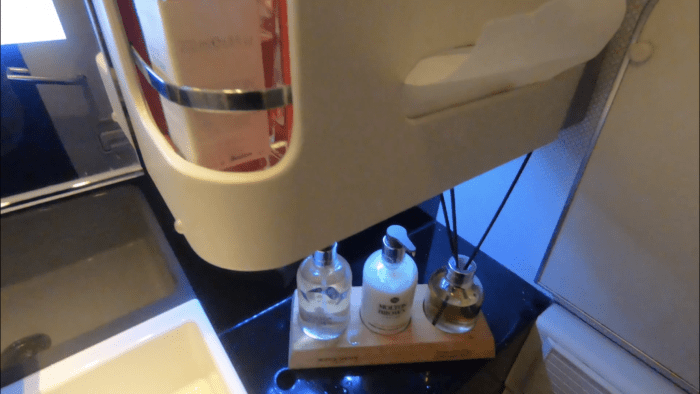 The in flight entertainment options were good, with something to appeal to everyone. The screen isn’t the largest, but was acceptable. Selections can be made via the handheld remote contained in the seat. 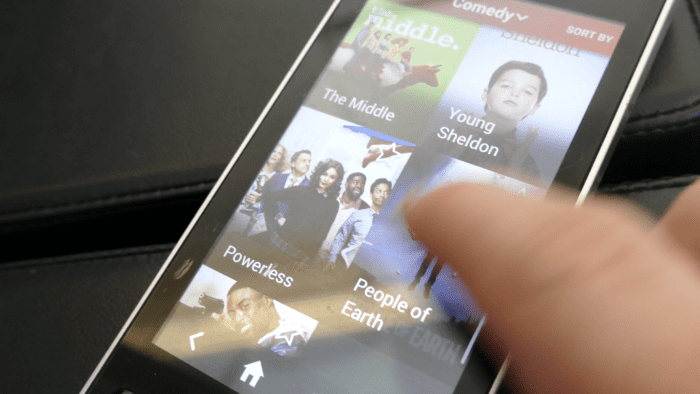 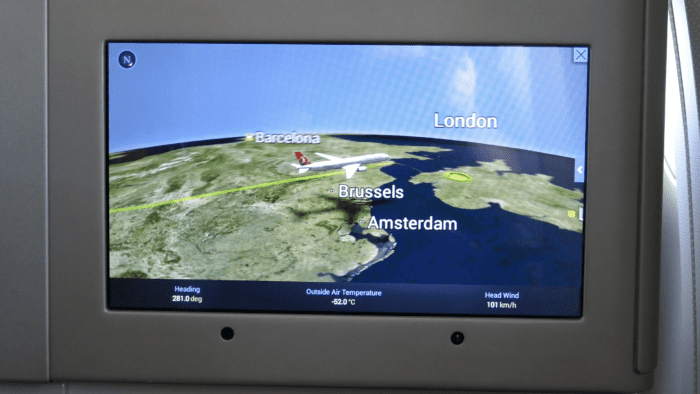 With 200 miles left to run, I ordered a couple of drinks for the descent (an irrational tradition of mine), and enjoyed a bumpy approach to Heathrow, over the centre of London. 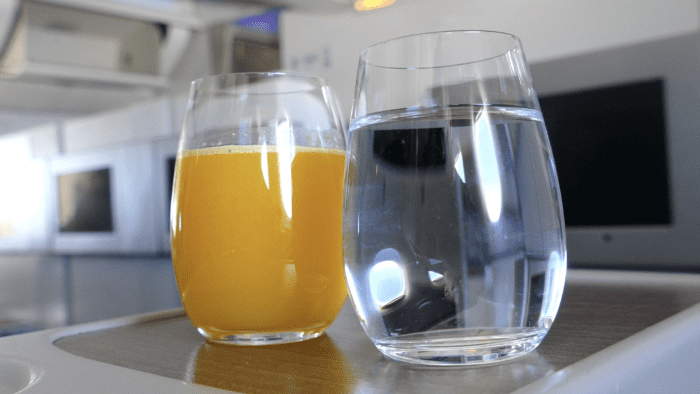 Overall, a good experience with the only detraction being the Ataturk experience. Turkish are an airline to watch – and I do hope their new lounge at the new airport continues to impress without making the mistakes of the old one! 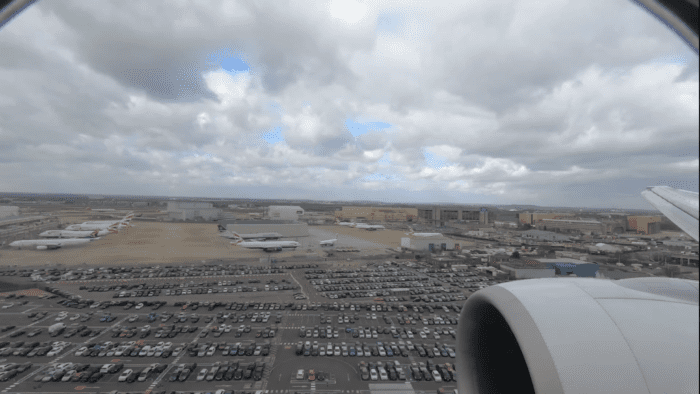 I paid £366 for this trip (approx 420 EUR) one way, Zagreb-Istanbul-London. It was a worthwhile experience and I’ll fly Turkish again and again in the future. Turkish operate at least one 777-300 flight into London every day, with A330 wide bodies supplementing the more standard A321s.